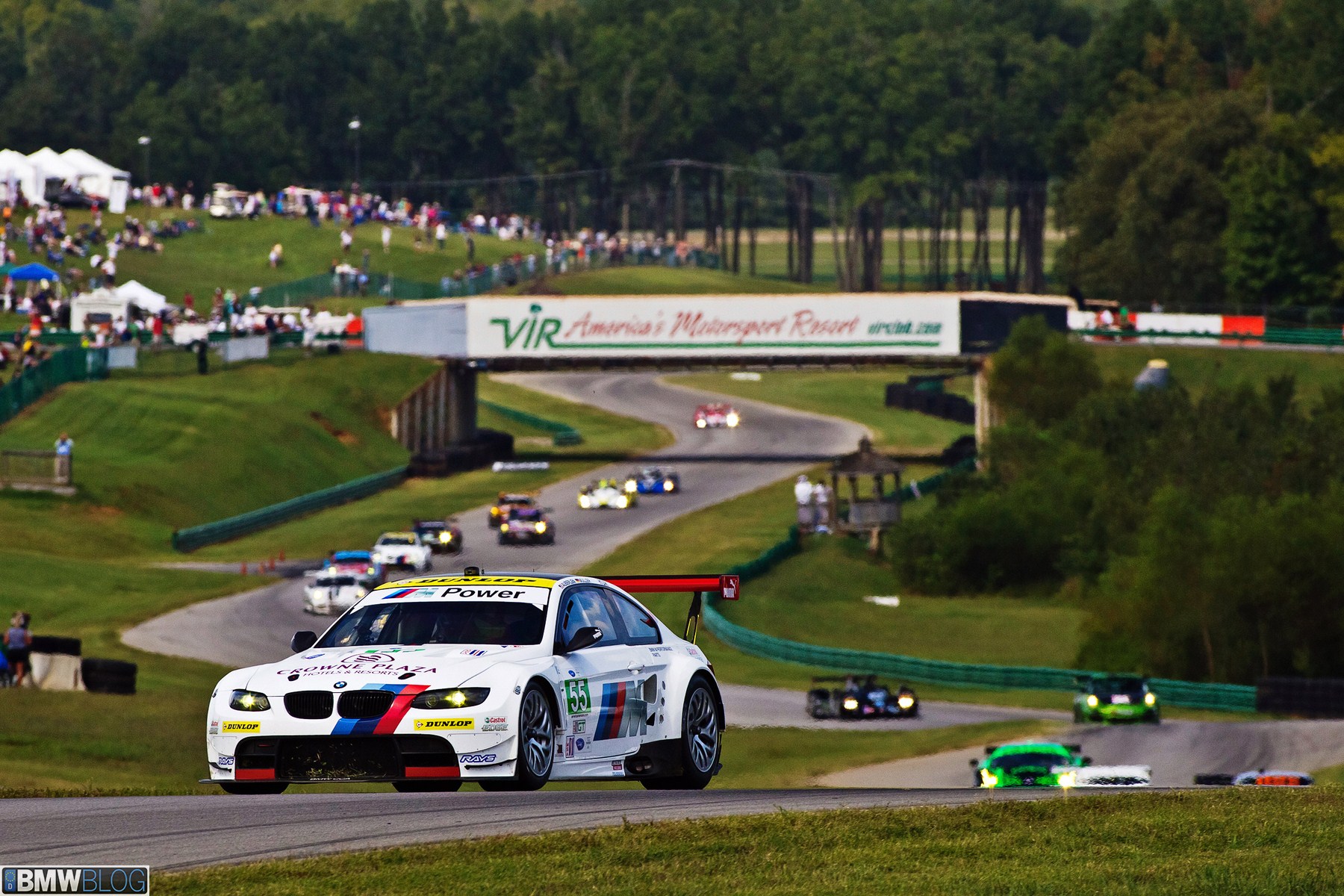 BMW Team RLL finished the inaugural American Le Mans Series race at Virginia International Raceway with the No. 55 M3 GT of Bill Auberlen and Jörg Müller in fourth place and the No. 56 M3 GT of Dirk Müller and Jonathan Summerton in ninth place. The disappointing result ended the team’s drive for a third consecutive GT class championship as Corvette Racing clinched the 2012 GT titles.

For the second consecutive race, a first turn altercation after the race start between prototype cars brought out the yellow flag and caused the balance of the field to scramble behind them. Müller, starting from the outside of the GT class front row, was forced onto the grass on driver’s left and fell back to the tenth position. 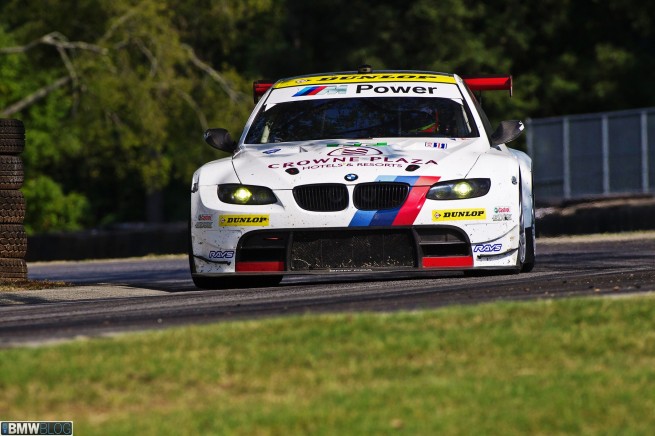 Auberlen, who had started from the seventh spot, had a bit more time to react and took to the grass on the inside of the corner, moving up to fourth. The two M3 GTs raced mid-field before pitting just before the races second yellow flag waved. Auberlen came in on lap 28 to hand off to Jörg Müller. Four laps later and just past the one hour mark Müller entered the pits and Jonathan Summerton took over. With one-and-one-half hours complete, Summerton held the third spot. Müller was two positions back in fifth. As the clock ticked past the mid-point of the race Summerton continued to hold the third spot. Müller was sixth.

Jörg Müller pitted the No. 56 M3 GT on lap 63 for fuel and new Dunlop tires. He remained in the car for a second stint. Summerton pitted five laps later to hand the No. 56 back to Dirk Müller. With one-and-one-half hours remaining the No. 56 held onto second, only some seven seconds behind the leader. The No. 55 moved up to fifth. 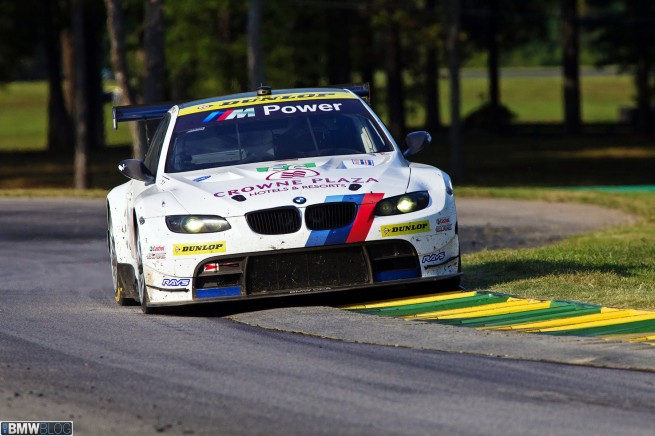 Just before the three hour mark the No. 55 pitted and Bill Auberlen got back behind the wheel. Unfortunately, at almost the same time it all went wrong for the No. 56. Müller was hit by a prototype car and forced to the pits to change a broken right front wheel. He returned to the race, but pitted on the next lap and the crew went to work on the damaged suspension. Unable to fix the bent toe link, Müller continued to circulate to collect points. He ultimately finished ninth.

Auberlen continued a strong run, moving up to third in the final stages of the race. A deflating tire lost him the podium as he was passed before having to pit for a tire change in the closing minutes of the race.

“Today certainly was a challenging day for BMW Team RLL,” said Jay O’Connell, RLL VP Technology. “The No. 56 M3 GT was running in P2 before being hit by a prototype effectively ending any chance for a good finish. The No. 55 didn’t quite have the pace of the other car, but Bill and Jörg drove a good race to almost realize the podium. Unfortunately, we could not hold the position.” 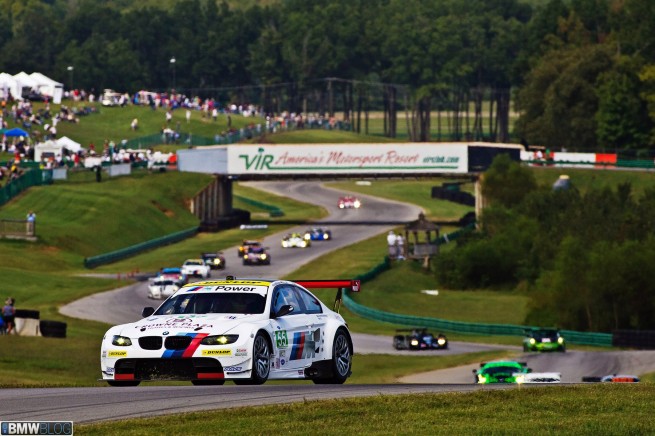 Bill Auberlen, driver No. 55 M3 GT – (fourth) – “It is so clear that we need straight line speed. The car was good, the team was good. We just don’t have the top speed. The longer the tracks, the more we are at a disadvantage.”

Jörg Müller, driver No. 55 M3 GT – (fourth) – “That was a very tough race. We made some changes that made the car better in my second stint and we were able to collect points.”

Dirk Müller, driver No. 56 M3 GT – (ninth) – “It is so disappointing to end the day like this. I was chasing down the leader and – wham – I was hit off the circuit. This is the second time this season that I have been taken out of the race. The prototype that hit me lost 60 seconds for a penalty, but we lost any chance to decide the championship at Petit Le Mans.”

Jonathan Summerton, driver No. 56 M3 GT – (ninth) – “The race was going very well for us and it is a shame that it ended like this.”

The final round of the 2012 ALMS season, the Petit Le Mans, will be held on Saturday, October 20th. Live streaming coverage will be available on ESPN3.com starting at 11:15 a.m. ET. ABC television will broadcast a race review show at 1:00 p.m. ET on Sunday, Sept 21st. 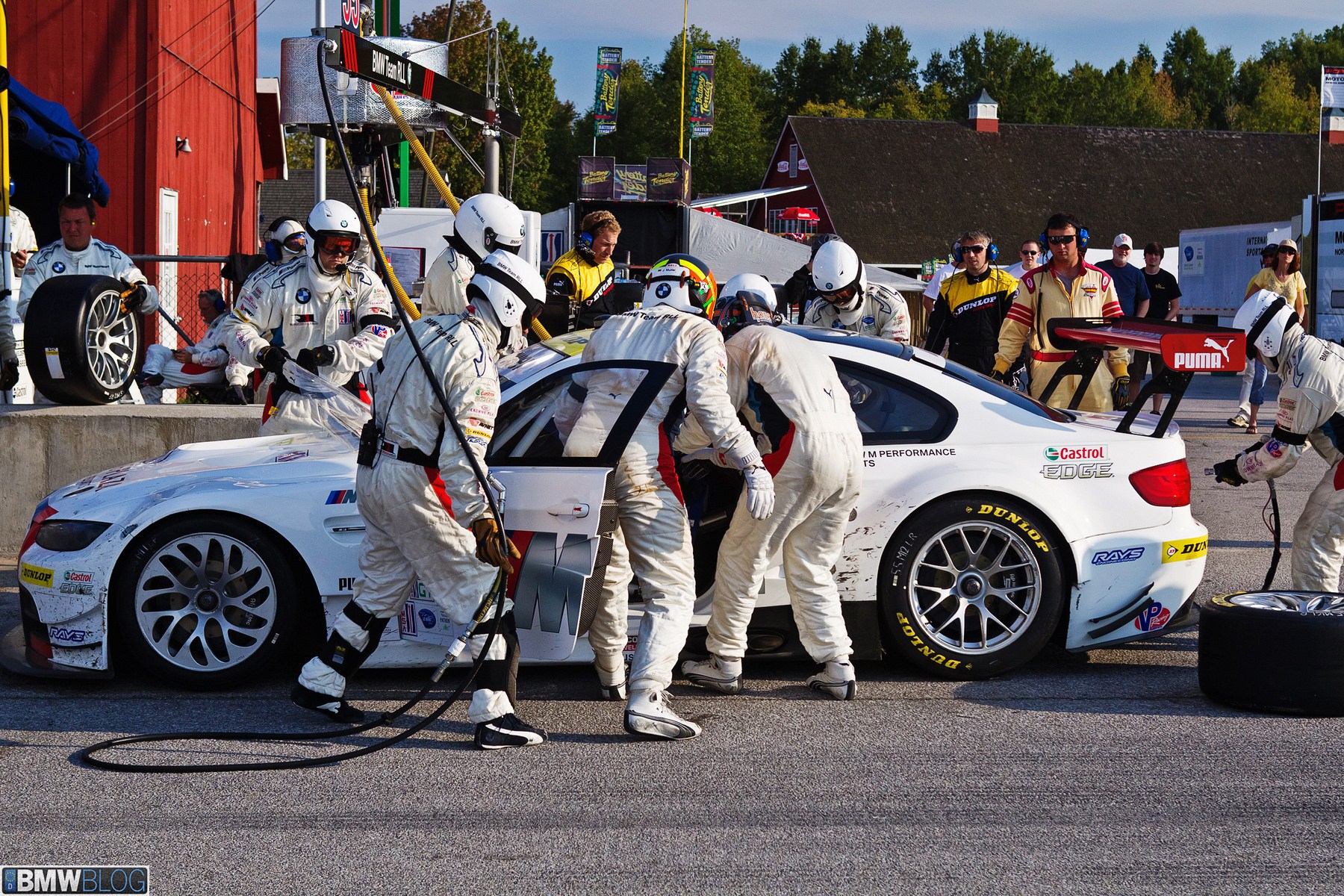 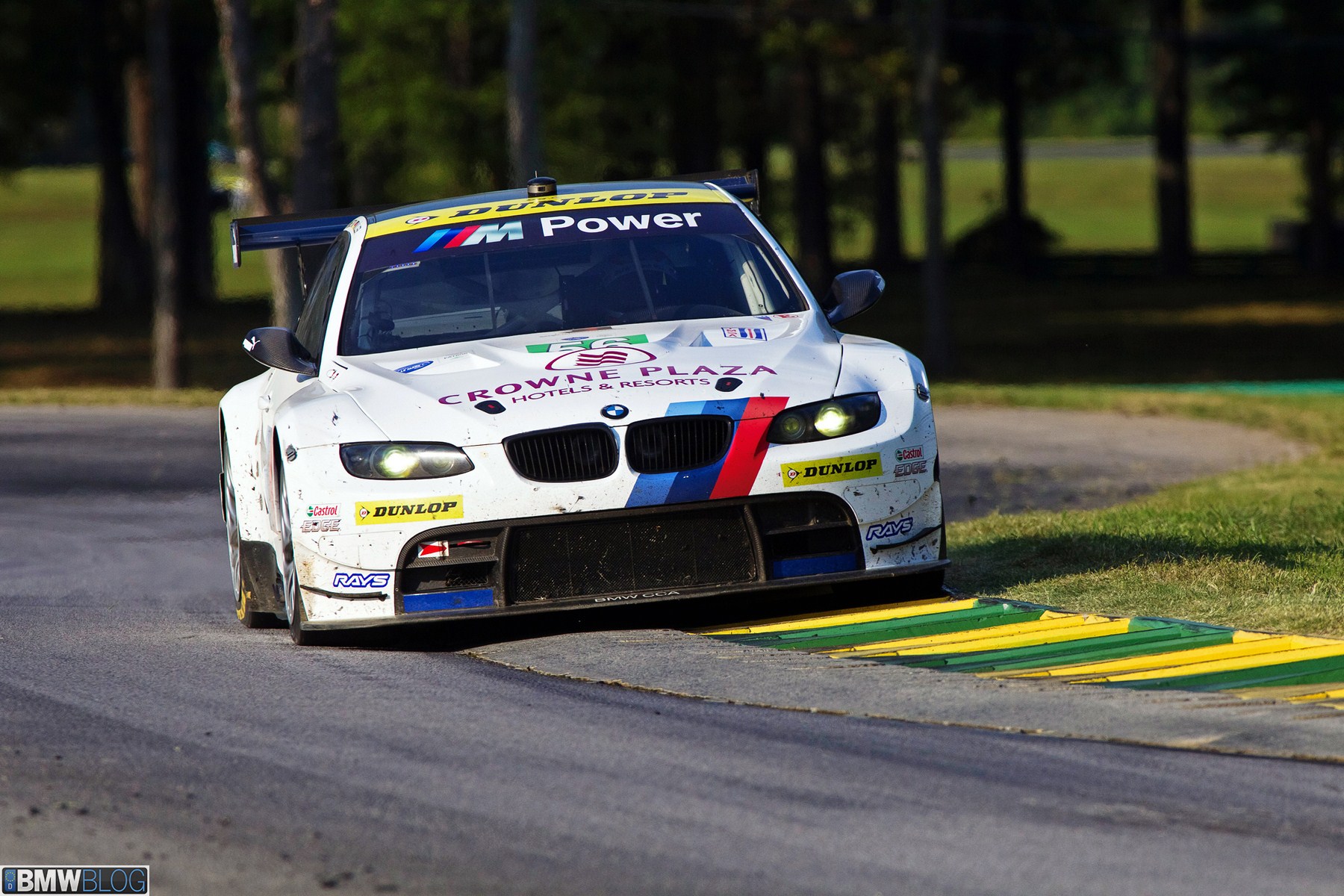 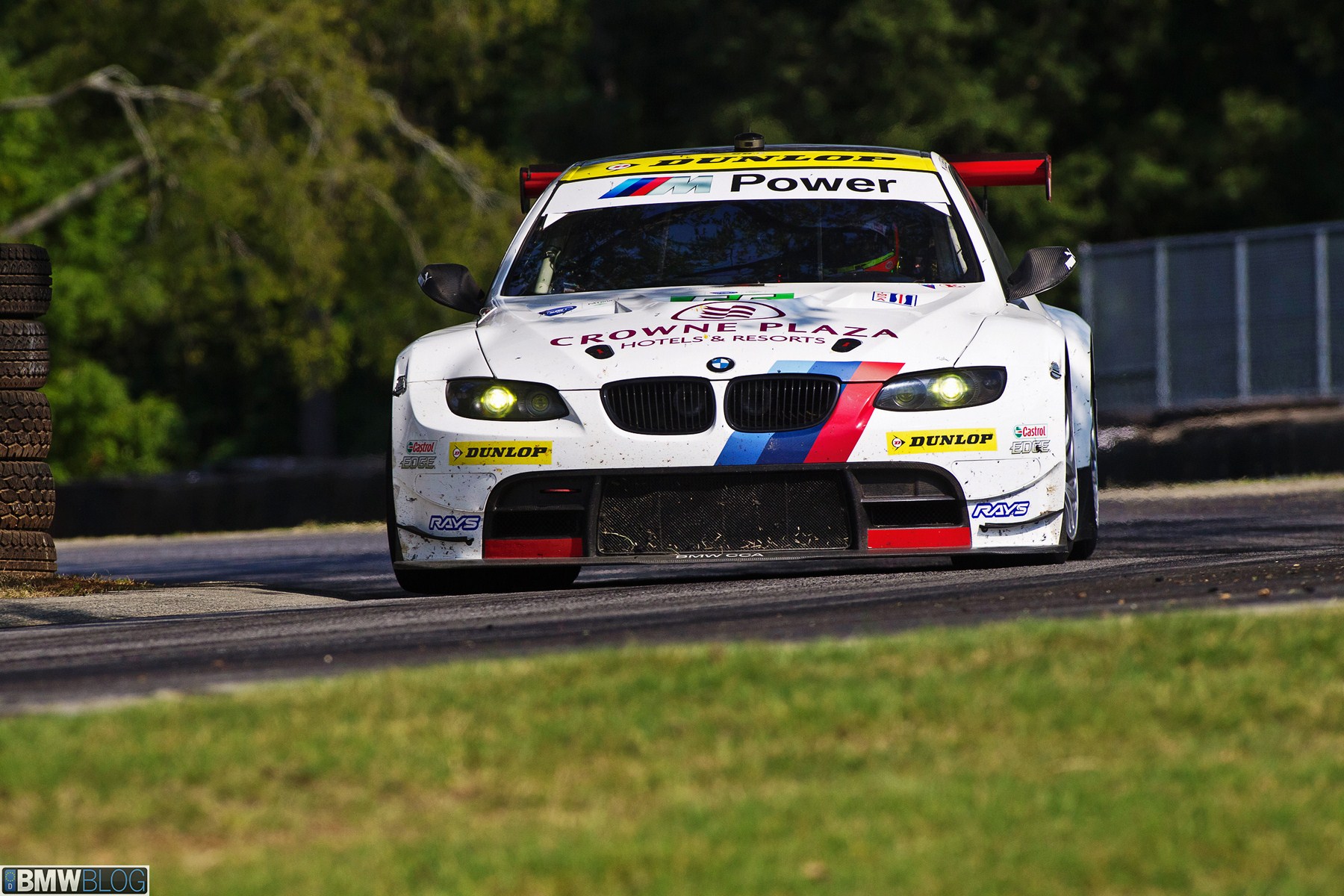