BMW Team RLL experienced a disappointing day at the Baltimore Sports Car Challenge after a controversial call by the race steward took the lead of the race away from the No. 55 M3 GT on lap 21 with a one minute penalty for avoidable contact. Ultimately finishing in eighth place, the call ended what could have been a great day for Bill Auberlen and Jörg Müller.

The No. 56 M3 GT of Joey Hand and Dirk Müller finished fourth after starting from the rear of the field. The move was required after the team elected to change to a new set of Dunlop tires for the race. Hand started the car and by lap 15 had moved up to sixth. Pitting from fourth on lap 26 he handed off to Müller. Müller challenged for third a number of times but was unable to make it stick, finishing fourth at the checkered flag.

The first 20 laps of Jörg Muller’s race was outstanding. He started the No. 55 M3 GT on the outside of the front row and made it through a first turn of spinning prototype class cars with only minor damage. He moved to second as the race went back to green and on lap nine he took the lead with a quick thinking inside move in turn one after the leader was held up. Twelve laps later he was forced to the pits to serve the penalty that was determined to occur in the front straight chicane. 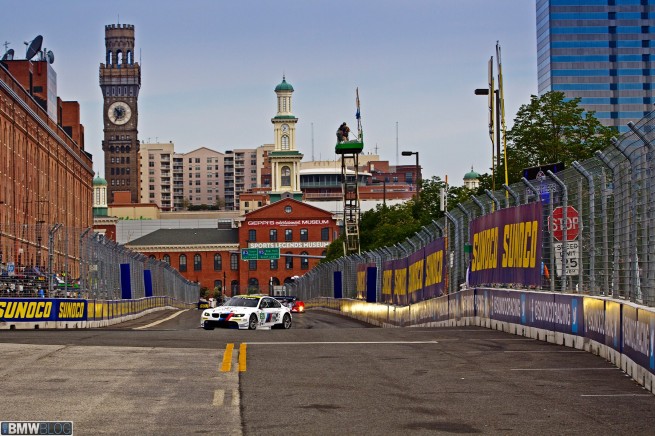 Auberlen entered the car on lap 24, returning at the rear of the field. He pitted once more from the tenth spot during the next caution period for softer tires. He made up two more positions to take the checkered flag in eighth.

This race is only the second time this season where at least one of the team cars did not finish on the podium. Now with two wins and four additional podium finishes in the first eight races of the season, BMW continues to stand second in the GT Class Manufacturer points. Dirk Müller holds onto the third spot in Driver points. Hand stands fourth. Bill Auberlen and Jörg Müller drop to seventh.

“It’s very disappointing for Jörg and Bill,” said Team Principal Bobby Rahal. “Jörg didn’t touch the car that crashed. Frankly it was close and someone is looking for any kind of infraction. We paid the price. It’s just a shame because we were leading the race pretty handily and ahead of the car that ended up winning the race. The No. 56 car had a good strong race. It’s clear that the Ferrari is faster than us on the long straights, so we couldn’t pass it there. It is the same with the Corvettes. We try and make it up in the corners, but there are just not enough of them. We scored points, but we were certainly hurt in the championship.” 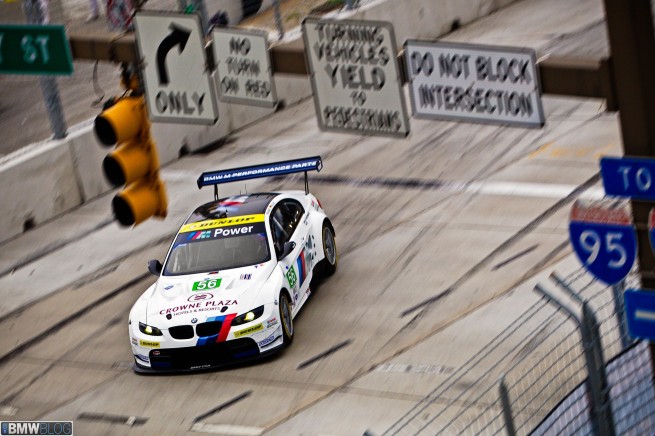 Round 9 of the 2012 American Le Mans Series will be held at Virginia International Raceway, in Danville, Virginia, on September 15. The four-hour race will take the green flag at 2:30 p.m. ET with live streaming coverage available on ESPN3.com starting at 2:15 p.m. ET. ESPN2 will broadcast the race at 5:00 p.m. ET on Sunday, Sept 16th.