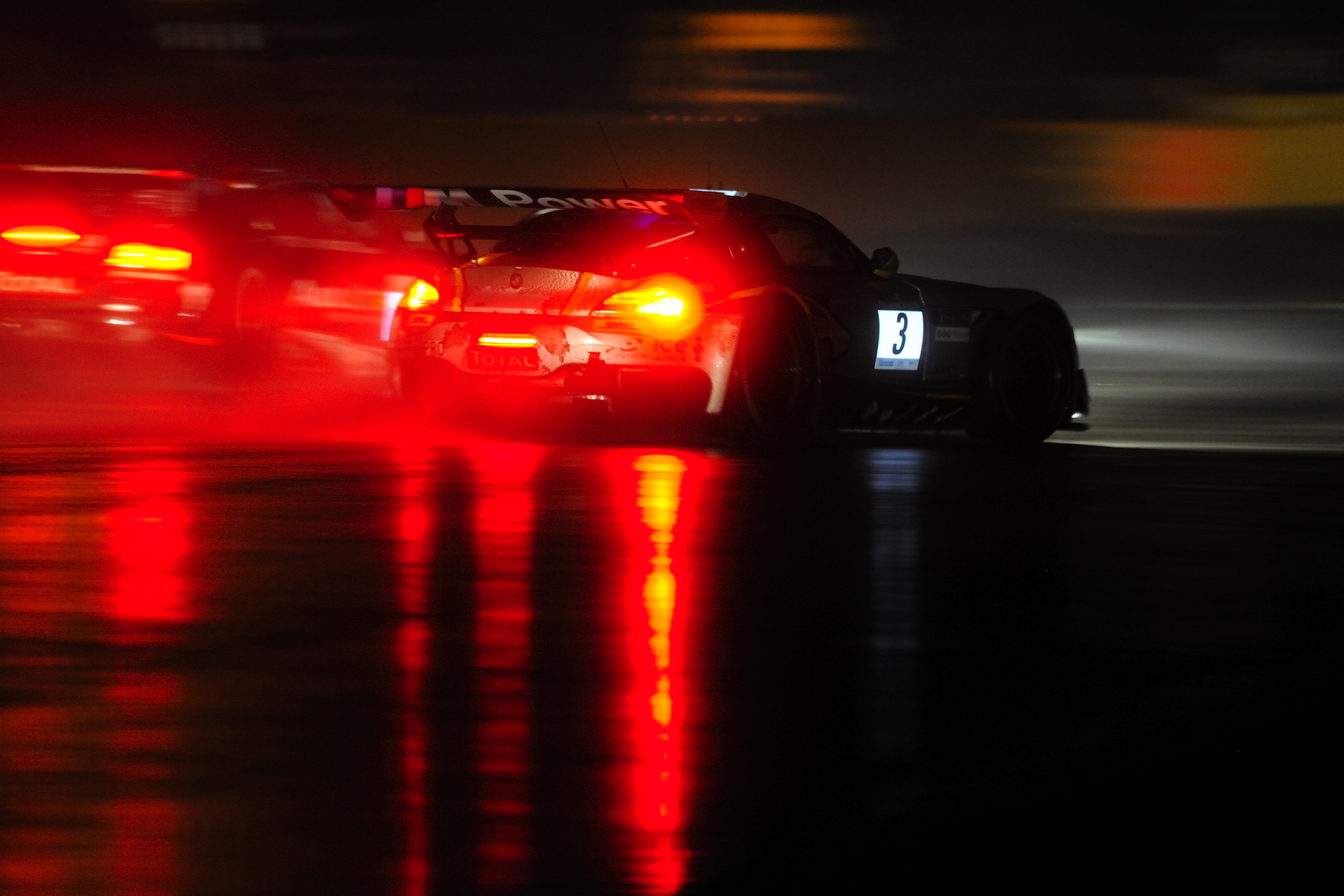 Heavy rainfall, 16 safety car periods and many fast laps: the BMW privateer teams and drivers experienced a turbulent 24-hour race at Spa-Francorchamps (BE). After 508 laps and another thrilling classic in the Ardennes, the number 66 BMW Z4 GT3 belonging to Vita4One Racing came home in third.

After starting from pole position, Gregory Franchi (BE), Frank Kechele (DE) and Mathias Lauda (AT) clocked consistently quick lap times and were rewarded with their first podium finish in the 2012 Blancpain Endurance Series, eventually finishing a lap behind the victorious Audi. 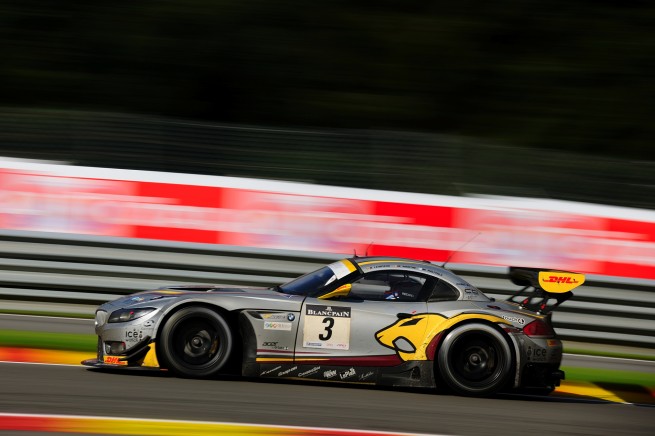 Marc VDS Racing drivers Markus Palttala (FI), Bas Leinders (BE) and Maxime Martin (BE) followed in fourth in the number3 BMW Z4 GT3. The trio led during the early stages and set fast lap times in both dry and wet conditions over the course of the race. When the rain came on Saturday evening, Martin was by far the fastest driver in the field and then set the fastest lap of the race (2:19.758 minutes) on a dry track. Although the three Marc VDS Racing drivers did not ultimately make it onto the podium, they were able to successfully defend the overall lead in the Blancpain Endurance Series. Car number 3 led after six hours of the race and was third at the halfway point, earning the drivers important points in the battle for the title in this hard-fought GT3 championship.

Bert Longin (BE), Henri Moser (CH) and Mike Hezemans (NL) can also be happy with their performance at the wheel of the number4 BMW Z4 GT3. The Marc VDS Racing drivers lost ground at the start and then lost a lot of time when they pulled into their garage for a repair stop. However, the trio managed to fight their way back to 15th over the course of the race. The BMW Z4 GT3 run by ROAL Motorsport (number 29) – driven by Tom Coronel (NL), Stefano Colombo (IT), Edoardo Liberati (IT) and Michela Cerruti (IT) – was classified 32nd after having been forced to stop for lengthy repairs after a crash.

Three other BMW Z4 GT3s retired before the end of the race. DB Motorsport’s number 37 car, with Simon Knap (NL), Andrew Danyliw (CA), Jochen Habets (NL) and Léon Rijnbeek (NL) in the cockpit, dropped out early after a crash. The sister car, number 36, was in the thick of the action at the front of the field for much of the race. Jeroen den Boer (NL), Stéphane Lémeret (BE) and Jeffrey van Hooydonck (BE) were second for a while, before Lémeret crashed out at dawn while running fifth. The race also came to a premature end for Race Art drivers Nick Catsburg (GB), Roger Grouwels (NL), Jaap van Lagen (NL) and Robert Nearn (GB).

This result means the total number of overall victories for BMW at the Spa-Francorchamps 24 Hours remains 21. The first triumph came back in 1965 courtesy of local favourites Pascal Ickx (BE) and Gérard Langlois (BE) with a BMW 1800 ti. The latest success was achieved by Alain Cudini (FR), Marc Duez (BE) and Eric van de Poele (BE) in 1998 with a BMW 320i.

“This third place obviously is the highlight of our cooperation with BMW on the endurance circuit to date. We are also satisfied with our results in the sprint races, but scoring a podium in Spa is always really special. We had planned to battle it out at the front  at the Nürburgring 24 Hours. While this didn’t quite work according to plan, we proved that together we can  improve. We have a really tough racing programme this year. If you then manage to get your car to the finish here at Spa and celebrate a podium result, then this is a fantastic feeling.”

“That was another tough race at Spa-Francorchamps. We were up against strong opposition and really had to perform to the best of our ability on every single lap. The 24-hour race in Spa is obviously special for me, as I come from this region. I just love the race, and getting a podium finish on this circuit means a lot to me.”

“Generally speaking, I am happy with our race. The car was great and the double stints worked really well. As far as the lap times are concerned, I was consistently up there with the front-runners. As such, I am very happy. I’d like to thank the team. Everyone did a super job. I could not watch the last few laps, when Frank took the wheel for the end stint. The podium finish is a nice reward for the whole team.”

“This race was just great fun. We were a bit unlucky to lose ground at the start, but that didn’t knock us off our stride. The team did a super job and we always believed we could make it onto the podium – and we did. The conditions were far from easy. There were a lot of crashes, particularly in the night, and you had to make sure you stayed out of trouble. Spa-Francorchamps is a great challenge for us drivers, and one that I enjoyed facing.”

“We fought hard in this race, but that is always the case in motor racing. We did not have any major problems, but plenty of minor ones. We tried our very hardest, right down to the final lap. We finished fourth at the 24-hour race at the Nürburgring. We were determined to do better here, but were just unlucky. Twice we were hit by another car, and twice we saw a lead cancelled out by a safety car period. Then we had the tyre damage. There were just too many minor setbacks .”

“This has been my first real 24-hour race. We pushed from the very first lap. In the beginning we were leading the pack and also managed to make full use of our advantage with the BMW Z4 GT3 in the wet. Then, however, there were all those safety car periods and many smaller problems, which then added up to increase our gap to the leaders. Nevertheless, I think two fourth-place finishes at the 24 Hours in Nürburgring and Spa-Francorchamps are quite an achievement for our team.“

“A really strange one for me. I only went out for the first time after 12 hours, due to my stop-and-go penalty. The most important thing was to collect plenty of points for the championship. That’s what we did. It could have been worse, but also a bit better. We were really fast, which is proved by Maxime’s fastest lap, but today we just weren’t meant to be further up the field.“ 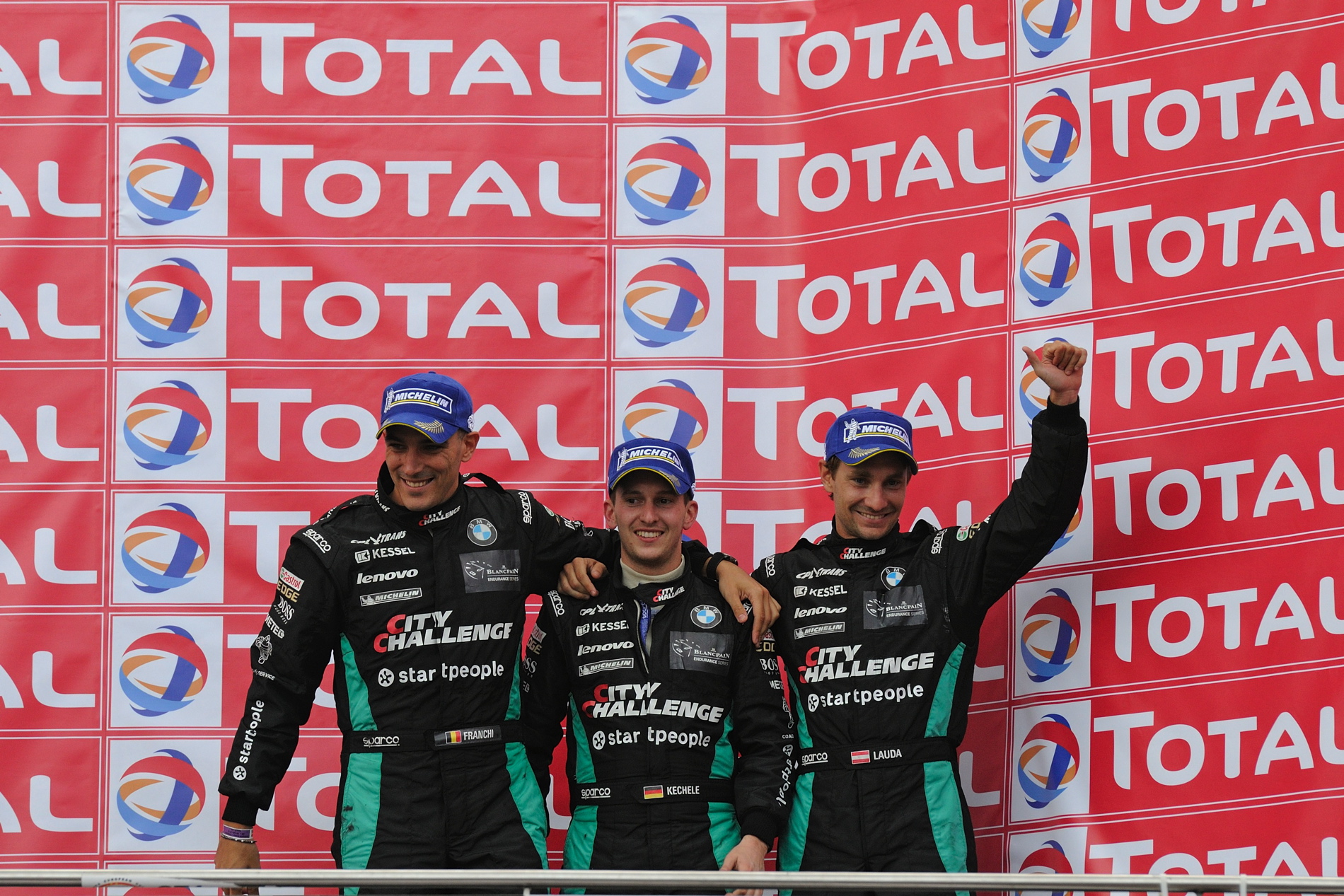 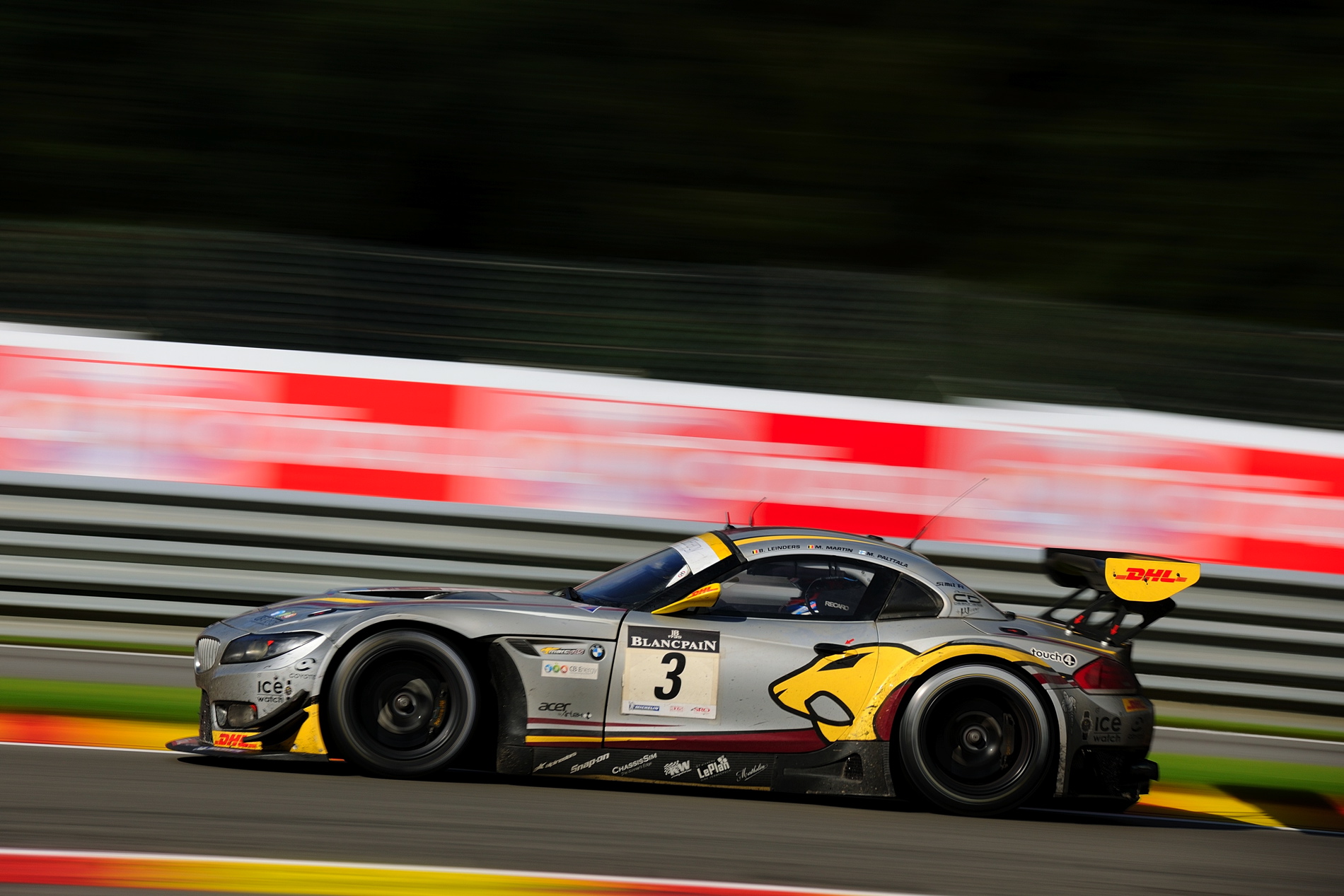 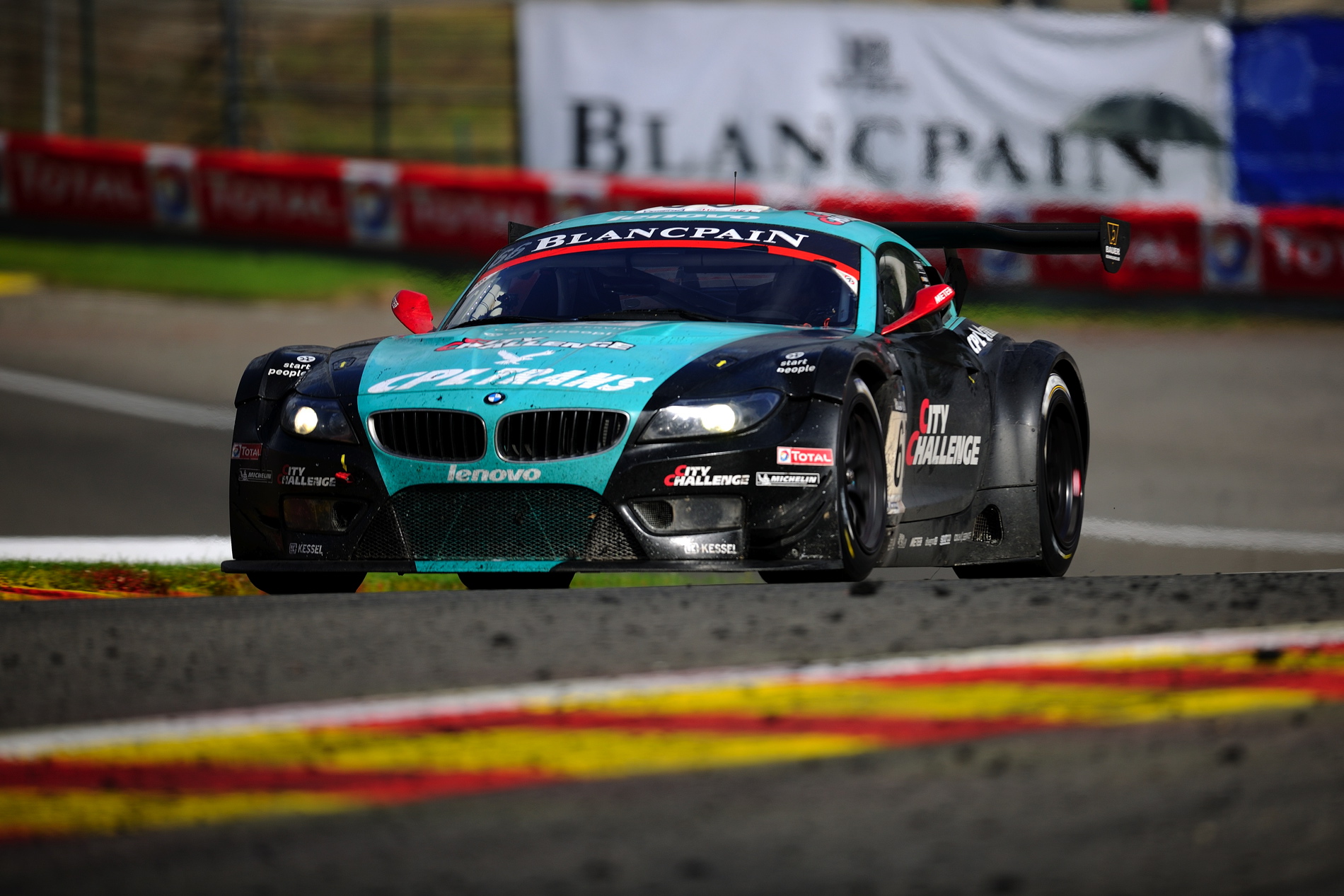 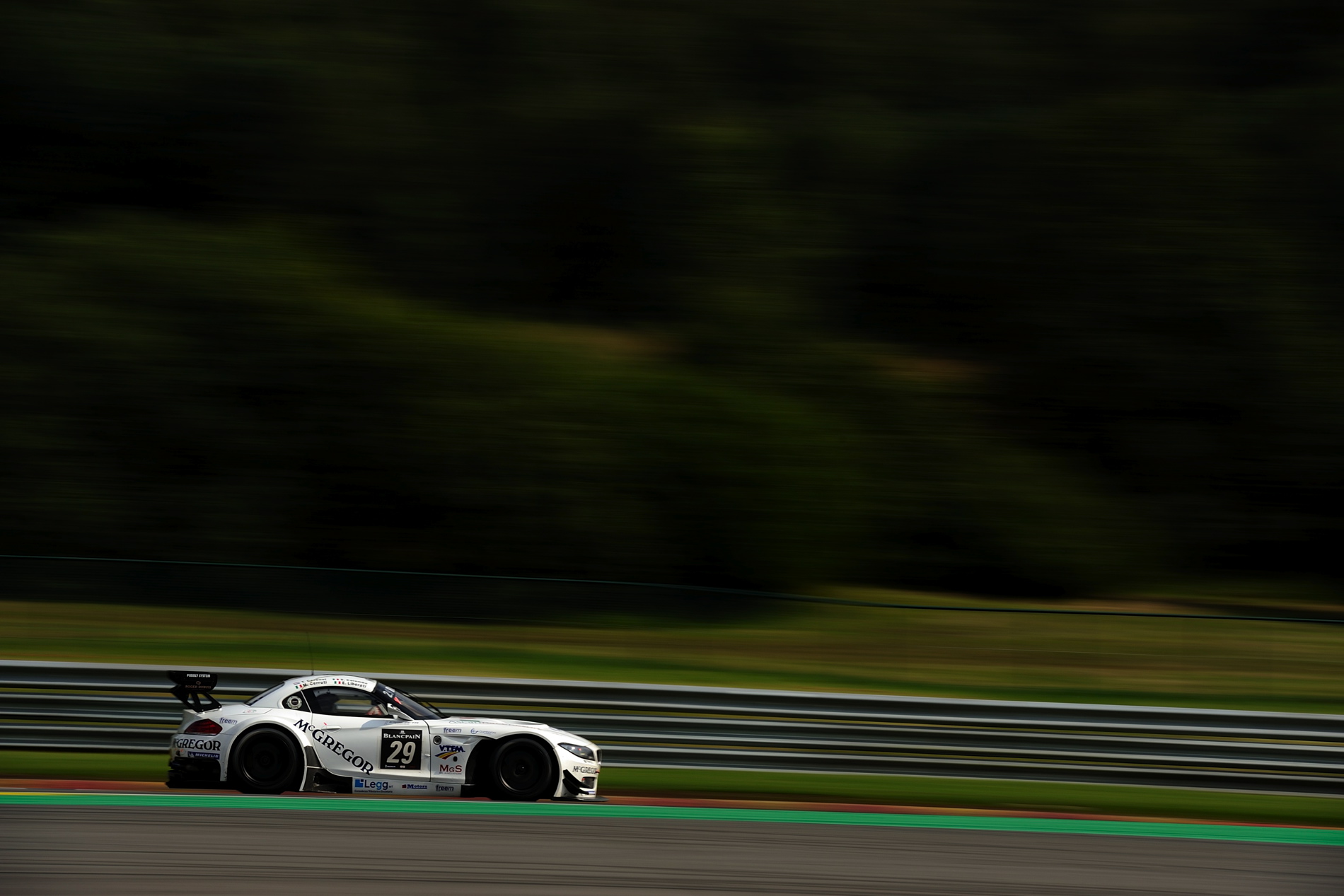