BMW Group has today announced a further £250m investment in its UK manufacturing operations by the end of 2015 at its plant in Oxford, steel body pressings operation at Swindon and engine plant at Hams Hall near Birmingham. This is to support the company’s international growth strategy for the MINI brand with increasing volumes and up to 10 different models in the new line-up in the mid-term. It comes on top of the £500m UK investment announced in June 2011 and means additional job security for the 5500 UK associates working in the UK MINI production network.

The announcement was made during a visit to MINI Plant Oxford by Business Secretary, Dr Vince Cable and Harald Krueger, Member of the Board of Management BMW Group, on the day when the Olympic Torch Relay will visit the plant. 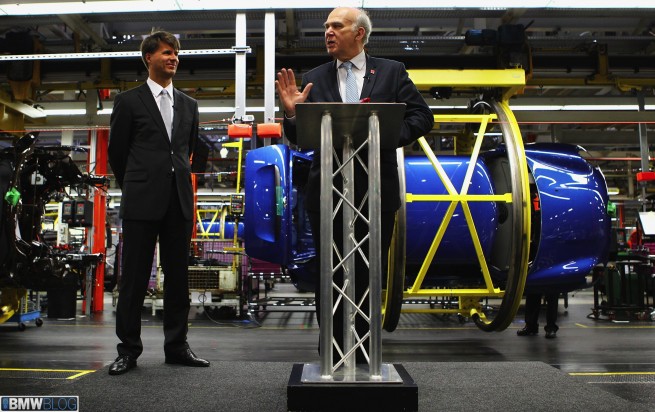 “A year ago we announced a further investment of £500m in our UK production network by 2014 and today we are announcing an additional £250m, taking us through to 2015. This brings our total investment in the UK since 2000 to £1.75 billion” said Krueger. “Over the last decade, MINI has been a unique global success and the BMW Group has even greater plans for the future development of the brand. Plant Oxford has played a major role in this with cars being exported to over 100 countries around the world. This additional investment is great news for all our employees in the UK and shows the BMW Group’s commitment to Britain as a vital manufacturing base for us.”

Dr Vince Cable addressed company employees at Oxford, warmly welcoming the new investment, “BMW’s ambitious plans for MINI will ensure its UK sites at Oxford, Swindon and Hams Hall remain at the centre of MINI production worldwide. The investment of £250 million in addition to the £500 million last year demonstrates BMW’s commitment to the UK and safeguards jobs for the future.”

The extra volume for the growth strategy of the MINI brand and the complexity of new model lines means that additional production capacity for MINI sales beyond Oxford’s maximum capacity is needed in the medium term and the company is now considering how to achieve this.

“Our preferred option is to establish a contract manufacturer as a satellite production as close to our UK operations as possible, at the Nedcar plant in The Netherlands, with whom BMW is in discussions.” explained Krueger.  “Oxford will provide special MINI production expertise for any new operation, particularly in dealing with the high complexity and customer individuality which MINI demands and in operating state-of-the-art, multi-model production lines. Just as Munich is the centre of the BMW world, Oxford is and will remain the home and the heart of MINI.”

As the volume and variety of the MINI model line-up grows, there will be additional production requirements for engines and body panels from the BMW Group’s specialist UK facilities in Hams Hall and Swindon. Part of the new investment is to develop specific production facilities to meet these requirements.

A report published by Oxford Economics makes clear the significance of BMW Group’s business operations to the UK economy. The key findings of the study show: