Today started out pretty miserable, weather wise. Teams awoke to loud thunderstorms, heavy rain and high winds as they made their way to Mid America Motorplex in Pacific Junction, Iowa. Believe it or not somehow we were the first team to arrive at the track to find the gates locked! Looking at each other, we began to compare our watches, think we’d arrived an hour early; criss-crossing time zone is mentally challenging. Anyway our fears were soon put to rest as a few minutes
later the track workers arrived and opened the gates.

With all the heavy rain falling we decided to see if we could find shelter for the car and belonging, and soon found the tech shed which suited our purpose. Only problem was the roof leaked when the winds increased their ferocity, and soaked much of our equipment.

For those that don’t know this track was closed for most of last year due to being underwater, due to the flooding that occurred in the area in 2011. Fortunately track management and their team had really worked diligently to make the track habitable again to race cars.

The storms pushed back the start by an hour to 9:00am, and depending on how you look at it, fortunately the rains started to subside. The early runners would have referred the rain to continue so everyone had to tackle a wet track, while the later runners preferred a drying track for obvious reasons.

After yesterday’s run at Autobahn, teams were re-classified based on their finishing position, so we were in the early group which meant Mike would have to learn the track on his recce lap, but also determine which water puddles were safe to transgress and which to avoid. This was SOP for probably the first 20 to 25 runners. After that a drying line began to appear and would allow the later runners an advantage.

We were in the third run group and Mike peddled the BMW M5 around had a decent showing, but knew crews in our class running later would have significantly better times, thus reducing our points haul for the morning. After all the runs were complete we finished 19th overall and 5th in Luxury Class. 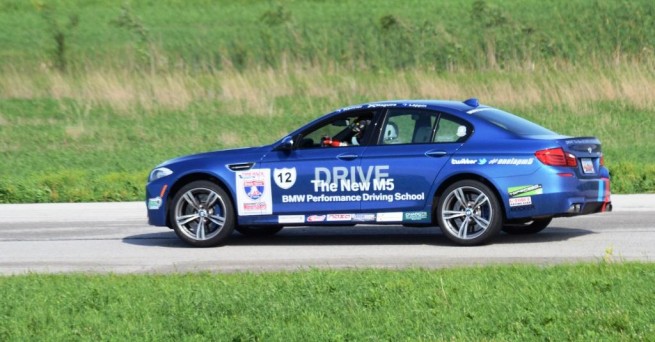 By the time the afternoon sessions started, the track was dry except for the odd puddle here and there, so everyone would be on an even footing. And sure enough the times tumbled. Our morning time was 5:35.319 and the afternoon result was 5:23.701, placing us 13th overall and 2nd in class for the session. So we end the day in 19th overall and 3rd in class.

We’d also like to thank all the enthusiasts who brave the elements and came to watch the BMW M5 and other One Lap Competitors in action. Like other competitors, as soon as our session is complete, we re-pack
the car, grab a couple of drinks and hit the road for the next destination. This afternoon our destination was the Holiday Inn, Stillwater, part of the IHG hotel group who kindly agreed to support our team on this year’s One Lap of America.

The car is washed, the team fed and I’m writing this from the comfort of my hotel room before catching a well-deserved sleep, before arising at 5:30 and heading off to Hallet Motor Racing Circuit for two time trials. 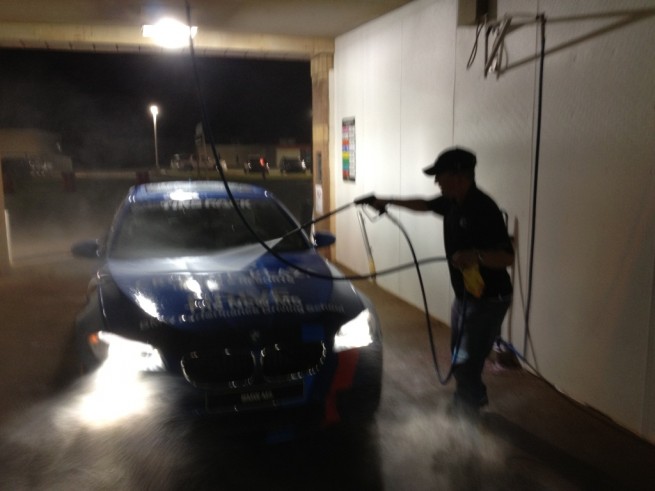 If you are in the vicinity of one of the tracks we’ll be visiting this week, we’d love to meet you and show you the 2013 BMW M5. Not only is it a great opportunity to see the BMW M5 up close, but also the chance to watch just how amazing this car really is when put through its paces on the track.