2012 London Olympics fleet to include 4,000 BMW vehicles, 400 bicycles and motorcycles BMW Group has today handed over the first vehicle to the London Organising Committee of the Olympic Games (LOCOG) to support the 2012 Games – and it’s a bicycle. Global Sales and Marketing Director for BMW Group, Ian Robertson, handed the bike to David Stubbs, Head of Sustainability for LOCOG in central London, as the one-year-to-go point approaches on 27 July.

A total of 400 BMW bicycles will be used by LOCOG in the run-up to and during the Games and will be part of a wide range of vehicles supplied by BMW Group, as a vital element of the company’s Tier One sponsorship of London 2012. These different models have been chosen by LOCOG to meet the diverse operational needs of the Games. 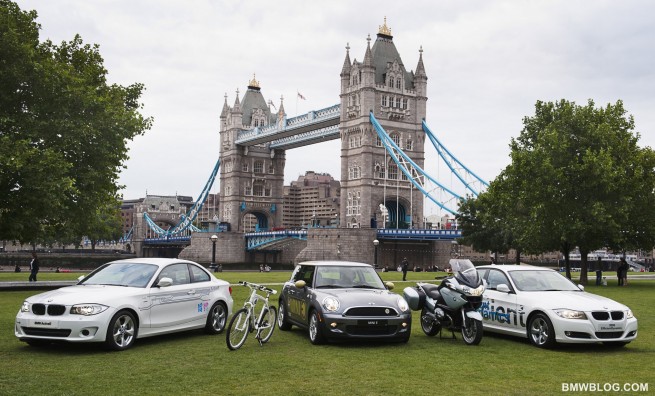 “Everybody will be travelling to the Games by foot, bicycle or public transport where ever possible,” said Stubbs, “and the LOCOG team will be no exception to this. It is rather fitting therefore that the first vehicle we accept for the 2012 fleet is a bike. However, cars and motorcycles remain a vital part of the transport arrangements to ensure the smooth running and full operational support of the Games.”

Robertson explained, “The majority of the fleet will be made up of highly efficient diesel-powered cars, featuring the company’s award-winning and industry-leading EfficientDynamics technologies. This has allowed us to meet LOCOG’s extremely challenging target of 120g/km of CO2, as an average across the fleet. Our success in the field of sustainable mobility has been recognised by the Dow Jones Sustainability Index, which has named BMW Group the world’s most sustainable automotive company six years in a row.”

The BMW 320d EfficientDynamics Saloon will make up at least a third of the fleet, with its exceptional fuel efficiency (68.9mpg combined cycle) and low CO2 figure of just 109g/ km. A new model, the BMW 520d EfficientDynamics Saloon will make its global debut later today and will also feature significantly in the 2012 fleet. This mid-size car returns fuel consumption and CO2 figures which put many superminis to shame – 62.8mpg on the combined cycle and a CO2 figure of just 119g/km.

Shaun McCarthy, Chair of the Commission for a Sustainable London 2012 said “As a major sponsor of the Games and a Sustainability Partner, we have been impressed with the dedication BMW has shown to tackling the twin problems of air quality and carbon emissions.  We welcome their contribution to the inclusion agenda by adapting a proportion of their Games-time vehicle fleet to enable them to be driven by disabled people. We understand this to be a first for the Olympic Games. We look forward to their contribution to a sustainable Games next year.” 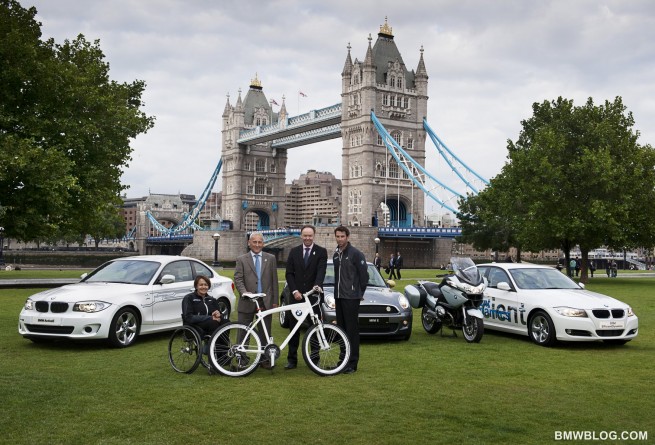 Electric vehicles will play an important role and the fleet will include 200 MINI Es and BMW 1 Series Active Es. In addition, BMW Hybrid cars will make their first appearance on British roads and an innovative electrically-assisted bicycle, the Pedelec, will debut on the Olympic and Paralympic fleet.

Speaking from City Hall, Kulveer Ranger, the Mayor of London’s Environment Director, said, “The Mayor is championing the rapid uptake of zero and low emission transport in London before, during and after the 2012 Games. This is a vital part of his vision to improve quality of life for millions of Londoners by cutting pollution and cleaning up the city’s air.”

“We therefore welcome this first glimpse of some of the cleaner, greener vehicles which BMW will be fielding as part of their Olympic and Paralympic fleet, including electric vehicles and bicycles. As cycling sits at the heart of City Hall, we are particularly pleased to see that BMW’s exciting new electric bicycle will debut in London next year.”

Motorcycles will feature significantly on the fleet too and their uses will include operational support of road and mountain biking events. BMW will supply a number of different models– R1200RT, R1200GS and F650GS.

“It is a tremendous honour to extend BMW Group’s long term commitment to the UK to this support for London 2012,” said Robertson. “The variety of different BMW Group vehicles in the London 2012 fleet, shows the depth of our dedication to provide sustainable individual transport to meet a broad swathe of different needs. We will supply almost 4,000 vehicles, in addition to the 400 bicycles, from diesels to electric cars, hybrids to motorcycles, as well as innovative new products like the Pedelec. I am also personally delighted that we are able to adapt a number of our vehicles for disabled drivers so that volunteers of different physical abilities can drive our cars.” Baroness Tanni Grey-Thompson, member of the House of Lords and the most successful British Paralympic athlete of all time, was also present at the hand-over and commented, “I am particularly delighted that BMW has taken such an inclusive approach to the vehicles they are providing for 2012. This will be the best Paralympic Games ever and a once-in-a-lifetime opportunity for all involved.”

Baroness Grey-Thompson is the newest member of the BMW London 2012 Performance Team and joins the 23 national sponsored athletes and 74 regional athletes, all receiving support from BMW Group.

To find out more about the BMW Performance Team visit www.bmw.co.uk/London2012.