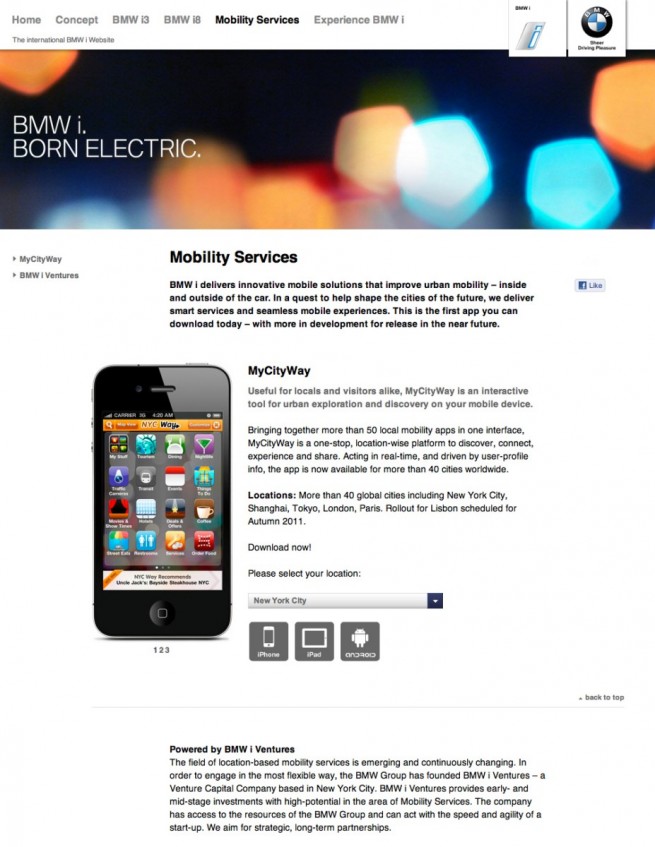 BMW i Ventures – the automaker’s recently established venture capital company with an investment fund of up to $100 million to develop individual mobility solutions for the world’s biggest cities – today announced Edward Robinson, a 32-year BMW Group veteran, will be President.

In addition, the fund announced the planned creation of an incubator laboratory space in New York City and establishment of an expert advisory board whose purpose will be to guide decisions regarding future investments.

“As urban populations around the world increase, the goal of BMW i Ventures is to develop and leverage technology to further the freedom of mobility,” said Robinson, who will assume the BMW i Ventures role in addition to his continuing service as President and CEO of BMW Financial Services, Americas Region. “We have chosen to base our operations in New York City because of its position as a center of digital media and technology and its proven commitment to furthering this industry.”

Established in February of this year, BMW i Ventures is focused primarily on mobile connectivity and location-based services aimed at increasing the freedom of mobility of individuals in the world’s most heavily populated urban centers. Significantly, BMW i Ventures will focus on premium mobility services – meaning that it will also look for solutions that are not exclusively related to automobiles.

The fund’s first investment was in MyCityWay, a set of location-aware apps for urban navigation that provides users with information on public transportation, parking availability and local entertainment that was one of the winners of New York City’s inaugural BigApps.

Beyond financial investment, the BMW i Ventures plans to establish an incubator space in its facility to further support up-and-coming companies and technology solutions.

“We had the potential to establish BMW i Ventures headquarters in a number of the world’s mega cities but we chose New York City because it is one of the world’s most complex and vibrant cities as well as for its sheer level of talent and creativity,” said Joerg Reimann, Managing Director of BMW i Ventures. “We also credit Mayor Michael R. Bloomberg and the Economic Development Corporation (EDC) for creating a welcoming environment and nurturing the City’s tech scene.”

Also announced today was the establishment of the BMW i Ventures advisory board and Josh Rubin, principal at Captain Lucas, Inc. and founder of Cool Hunting as the first member. Rubin has been noted for his expertise on strategy, content, and design for digital products, services, and publications, specifically in mobility-user experience and consumer behavior.

“With the assets BMW brings – not just in terms of financial, but including brand recognition, market access, technological and engineering as well – BMW i Ventures is poised to become a major enabler of software-based mobile solutions for years to come,” said Rubin. “There are so many companies with early-stage products that with the right amount of guidance and fostering could become the next indispensable tool for urban mobility.”

All of today’s announcements culminate to set a positive foundation for BMW i Ventures’ future work.