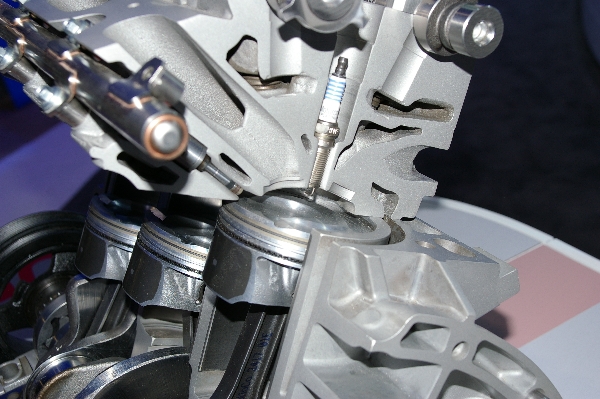 BMW releases a new video of the highly praised N20 engine. The four-cylinder TwinPower engine is replacing the six-cylinder naturally aspirated engines found in several BMW models. First vehicle to receive the new four banger is the X1 xDrive28i which will be followed by models from the next generation 1 and 3 Series.

Judging by the video below, it would appear that if BMW is using a second generation solenoid injector, spray-guide and direct injector. They are cheaper than the Bosch Piezo injectors used in the N54/N55 six-cylinder turbocharged engines, but they can still be used at the top of the cylinder head, unlike first generation solenoids which are usually found on the side of the combustion chamber (see the attached pic of Ford’s EcoBoost cylinder head).

The video goes into further details of the way the engine operates and some of its components.

Just a bit more background, piezo injectors allow for stratified charge (better fuel economy) if you have a uniform quality supply of gasoline, which the US doesn’t. So BMW doesn’t implement the stratified charge capabilities of the injectors in the N54/N55 engines in the US (at least – not sure if it’s implemented in Europe).

The first gen solenoid injectors did not have the capability to do stratified charge. In fact they generally were installed in the side of the combustion chamber and ‘bounced’ the spray off a ‘seawall’ built into the crown of the piston, to provide appropriate fuel/air mixing.

Recently Ricardo has been working on a spray guided DI using a solenoid injector (“A Clear view on gasoline combustion”, Ricardo Quarterly, 3Q 2010). This injector has an outward opening ‘pintle’, like a piezo injector. The spray guided direct injector (SGDI) is also known as an a-nozzle injector.

If BMW is using a solenoid SGDI, it’ll be on the leading edge of tech. The benefit is the ability to do stratified charge at lower costs, especially in an engine that you intend to make a HUGE volume of (would BMW resell it?).