G-Power is back with another nutsy project, but this time with a flavor of “green”. The European tuner combined their supercharger packages with LPG (natural-gas) instead of gasoline. Beside the eco-friendly benefits, LPG is also known to cost about half per liter than gasoline and reduces CO2 by 15 percent.

More details in the press release below.

Press Release: G-POWER is known first and foremost for spectacular supercars, enormous power hikes and world speed records. What is less well-known, however, is the fact that environmental protection and resource conservation also enjoy a high priority in all G-POWER developments.

The whole package becomes even more environmentally friendly when the increased output is delivered courtesy of LPG instead of petrol. The conversion, however, is not that straightforward, even for series production high-revving engines. The even bigger challenge comes when the engine in question is also supercharged via two ASA radial compressors. By lucky coincidence, G-POWER is not only a supercharging specialist, but also one that happens to have particular expertise with BMW V10 power units. It is not without reason that G-POWER is the only company worldwide to offer an aftermarket supercharger system for the BMW V10 engine.

The outcome is the G-POWER M5 HURRICANE GS equipped with one fully sequential five-cylinder LPG system per cylinder bank. The benefits of LPG as a fuel are both economical and ecological in nature – not only is LPG around 50% less expensive per litre than petrol, it also reduces CO2 emissions by around 15 percent.

That said, there can be no sacrificing the hallmark G-POWER performance increase. 660 hp and 650 Nm of torque are the figures achieved by the SK II bi-supercharger system thanks to low-pressure forced induction with a relative charge pressure of 0.6 bar. Each cylinder bank of the 5.0l V10 power plant is equipped with a belt-driven ASA T1-313 compressor. Compared with conventional mechanical superchargers, which consume a large proportion of the additional power generated to drive themselves, ASA compressors have an efficiency rating of up to 80 percent. They thus form the ideal foundation for efficient forced induction, as well as increased output with an eye on resource conservation. 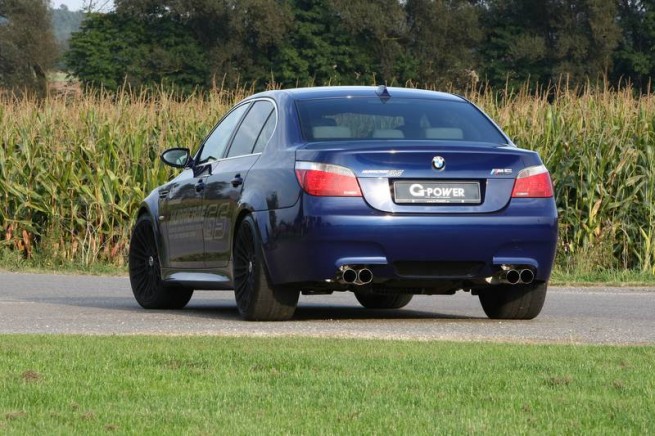 Downstream of the two ASA compressors, the pre-compressed charge air is brought down to performance enhancing temperatures by the twin-scroll, water-cooled intercooler finished in G-POWER’s characteristic orange. This sophisticated cast aluminium component replaces the series production airbox above the engine, where its short airways facilitate the same spontaneous responsiveness as the series production engine, albeit combined with a considerable benefit in torque. The superiority of the G-POWER compressor system is particularly evident when it comes to low-end torque, which is one weakness in the high-revving concept favoured by M GmbH. At long last, the 5.0l V10 offers impressive power delivery, of the kind that many customers might reasonably have expected from the series production version. Specifically developed mapping of the engine electronics and SMG transmission control ensure perfect interaction of all components. 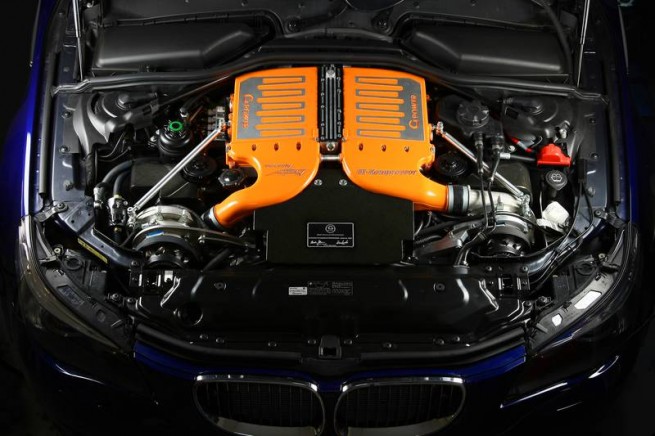 08.09.2010, 02:48 hours, local time. A desolate strip of autobahn close to G-POWER headquarters in Autenzell. The final test on the G-POWER development protocol is, as always, the calculation of top speed. With a sonorous growl from the G-POWER SPEED-Flow exhaust, the G-POWER M5 HURRICANE GS lets loose, just a few seconds later reaching its top speed of 333 km/h – a world record for an LPG car. With this world speed record, G-POWER delivers an impressive demonstration that high performance and environmental compatibility don’t have to be mutually exclusive.

Of course, it’s not just in top speed that the G-POWER HURRICANE GS achieves top marks. From a standing start, it sprints to 100 km/h in only 4.6 seconds. The 2-tonne saloon passes the 200 km/h mark in a total of just 11.4 seconds.

The immense forces that lie behind these figures are transmitted to the road via 9.0 x 20-inch and 10.5 x 20-inch forged SILVERSTONE CLUBSPORT alloy rims clad in 255/35 ZR 20 and 285/30 ZR 20 MICHELIN tyres. Thanks to their race-proven production technology, the G-POWER wheels are no heavier than the series production wheels, despite their larger dimensions. The resulting reduction in unsprung masses ensures better acceleration and greater agility through corners.

Further contributors to the high-speed capability of the HURRICANE GS are the G-POWER high-performance braking system and the G-POWER RS coil-over sports suspension, with 9-way adjustability for compression and rebound plus infinitely variable height adjustment.

The G-POWER SK II bi-supercharger system incl. conversion to LPG is also available for the current BMW M5 and M6.

Precision Sport is the official installer for G-Power in the United States. 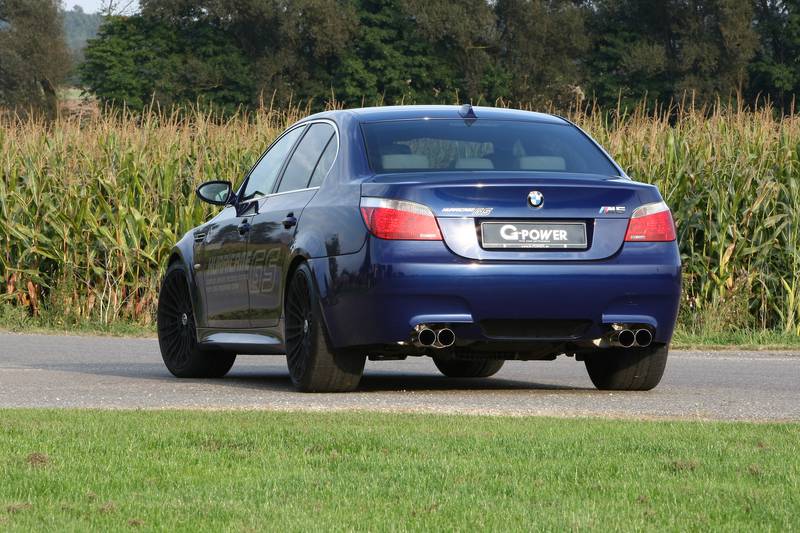 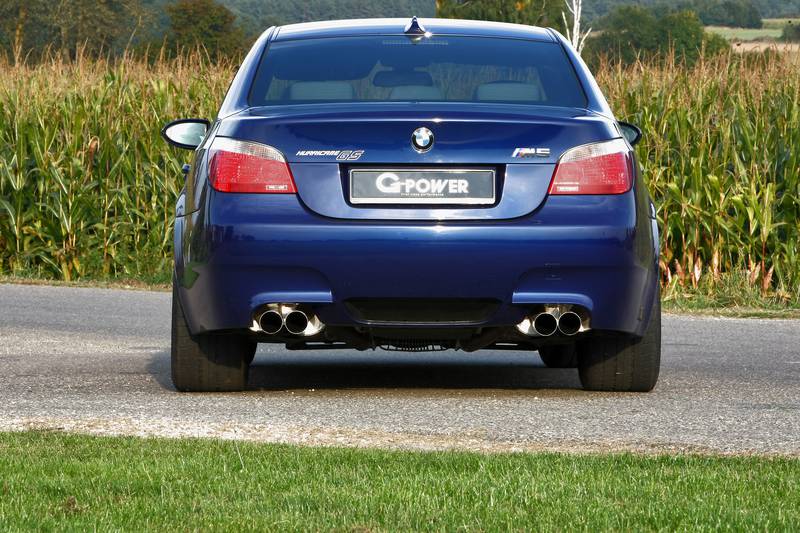 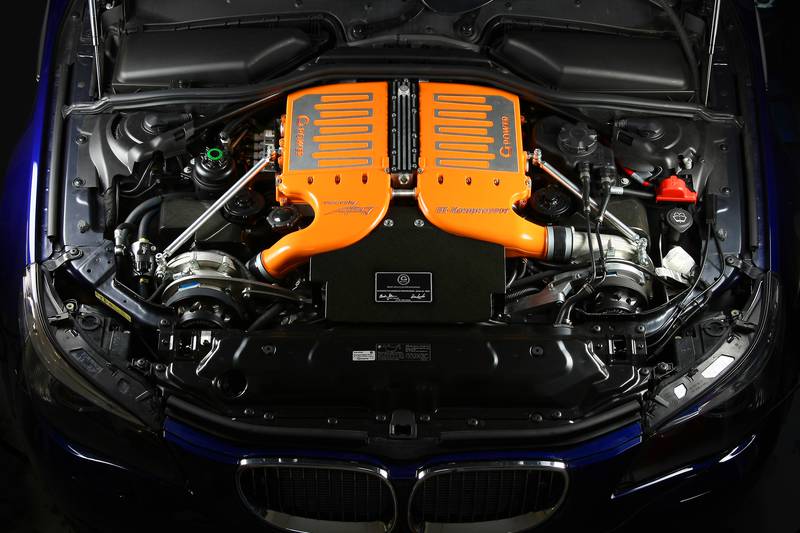