BMW X3 Games: the ultimate challenge for sporty all-rounders from around Europe 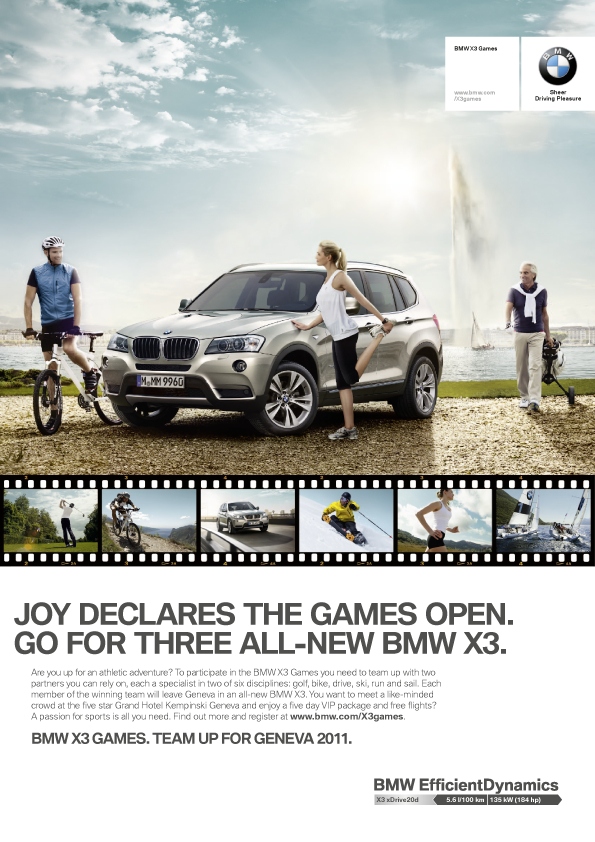 Next year, BMW is offering amateur sportsmen and women from throughout Europe a unique stage to demonstrate their versatility, skill and ability to work in a team. Sixty teams, each consisting of three members, will go head to head in six challenging disciplines at the BMW X3 Games. Sailing, mountain biking, skiing, golf, running and driving are in store for the international competitors when they test themselves from 27th April to 1st May 2011 in Geneva (CH). The teams must also successfully complete a creative task. The winning team can look forward to a sporting all-rounder: each team member will receive a new BMW X3.

“The BMW X3 Games are aimed at amateur sportsmen and women from all age groups,” says Ralf Hussmann, Head of BMW Sports Marketing and Brand Cooperation. “Each competitor can bring their own personal strengths to this multi-sport event, thus working with team-mates to achieve the big goal. However, the BMW X3 Games are about more than three spectacular main prizes. Teams from 18 European countries will assemble in Geneva, where they will not only compete against each other in an exclusive environment, but will also line up together. We can look forward to thrilling duels in a unique atmosphere.”

From 15th November 2010 to 28th February 2011, anyone interested can either register individually online at www.bmw.com/X3games or as a complete team of three. The teams to appear at the BMW X3 Games in Geneva will then be drawn and receive a notification concerning their participation by mid-March 2010. Each entrant will compete in two of the six sports. All three team members will work together to master a creative task. A points system will be in place to determine the overall score.

The BMW X3 Games are scheduled to start with a sailing regatta on Lake Geneva. The contestants will sail on Beneteaus First Class 7.5 yachts. They will then move on to a challenging course in nearby “Juragebirge”, which they will tackle on BMW Cross Country Mountain Bikes. The ski competition will be held in Chamonix Mont-Blanc, close to the Swiss metropolis, before the participants must demonstrate their ability behind the wheel of the BMW X3. A round of golf in Gross Stableford format and a 14-kilometre run round off the sporting challenges at the BMW X3 Games.

The overall winners can look forward to an impressive vehicle. The new BMW X3 celebrated its world debut at the “Mondial de l’Automobile Paris 2010” in October. Featuring greater sportiness, driving comfort, interior space and versatility, the X3 is significantly increasing the lead in the segment founded by its predecessor.

First to the destination, last to refuel: When it comes to efficiency, the two engine variants available as the car is launched are setting new benchmarks. The Auto Start Stop function is combined with an eight-speed automatic gearbox for the first time. No other manufacturer in the world can boast such a comprehensive range of measures for reducing consumption and CO² emissions as BMW. High-performance engines and a sporty driving style need not conflict with the environment and resources. BMW X3 xDrive20d with automatic gearbox: combined consumption 5.6 litres/100 km, combined CO² 47 g/km. BMW X3 xDrive35i with automatic gearbox: combined consumption 8.8 litres/100 km, combined CO² 204 g/km. The new BMW X3 is also the first BMW X model, which has an EPS Electric Power Steering and optional Performance Control as standard. The choice of driver assistance systems offered by BMW ConnectedDrive is unique in the segment. The new BMW X3 can be equipped, inter alia, with Adaptive Cornering Headlights, Head-up Display and reversing camera including Top View.