Absolutely, this is one of the finest cars ALPINA has ever made. Based upon the new F01 7 Series sedan, ALPINA GmbH takes details into their own hands, producing a unique, focused and exclusive performance luxury sedan.

Why would I state performance in front of luxury in this description? After all, the B7 is based upon the ultra luxurious BMW 7 Series. They say a picture is worth a thousand words; if you are still wondering, perhaps you should have a look at our photo gallery.

ALPINA has “rebuilt” the 7 series to a very high standard of reliability and performance. The N63 twin-turbo V-8 engine of the 750i has been developed with completely new electronics and a computer-assembled wiring loom. The turbos are enlarged and the exhaust system has been enhanced so as to reduce back pressure. The results of ALPINA”s work is manifest both on paper and on track. 500 hp is achieved at 5,500 rpm along with a staggering 516 lbs-ft of torque from 3,000 to 4,750 rpm. The engine produces 113.8 hp/liter on its way to a 6,550 rpm redline. 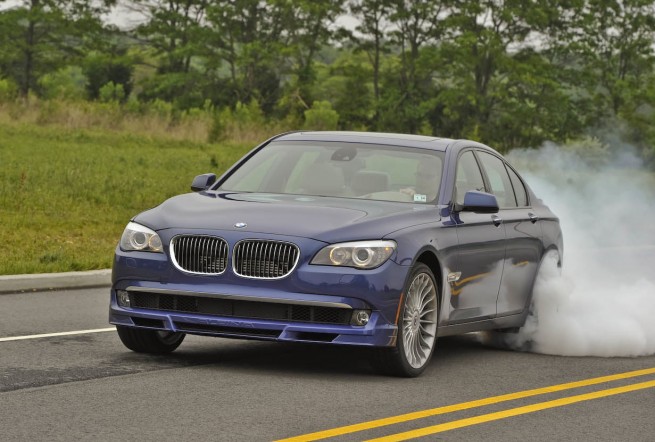 Harnessing all of this power to the ground are massive 21 inch, 20-spoke light alloy ALPINA wheels. Several decades ago, ALPINA discovered that the optimal design compromise between weight and strength is found in a 20 spoke wheel design. From that time forward ALPINA adopted these unique wheels across every vehicle they’ve produced.

Form follows function in the ALPINA design ethos, and this can be seen from every angle of the B7. A rear deck-lid spoiler is subtle in style but highly functional, alterations to suspension set up are felt from the first corner, powerful brakes halt the large car effortlessly and the powerful engine is nothing less than fear inspiring. 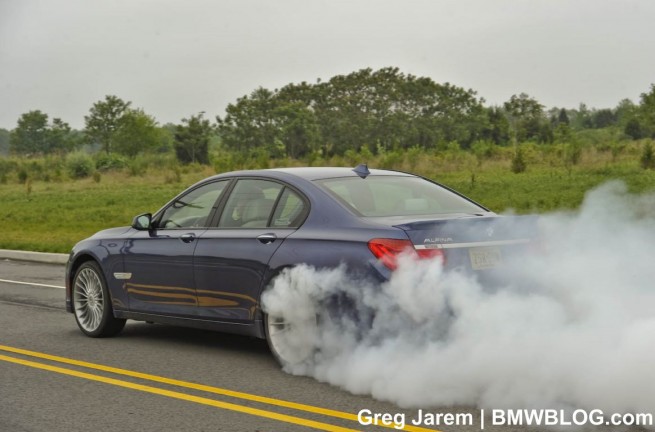 “ALPINA GmbH takes details into their own hands…”

Blades of grass quiver by the roadside, pulsing to the exhaust note. Small pebbles turn and run for cover. Insects flee the scene. The mighty B7 is about to be unleashed. A heavy dose of throttle lights up the rear wheels, the turbocharged engine easily overcoming available traction – even on clean, dry pavement. Heading to the first corner, I feel unsure of the B7’s cornering ability. Will it turn in or push wide with understeer? Worry not – the B7 is scalpel sharp, very neutral at the limit and eager to turn in. Once through the apex, the big four-doored sports car puts power down with a slight wiggle from the tail; reminding you that a cautious right foot is necessary in this powerful sedan. Straightening out from the last corner, speed builds effortlessly, smoothly, quickly! 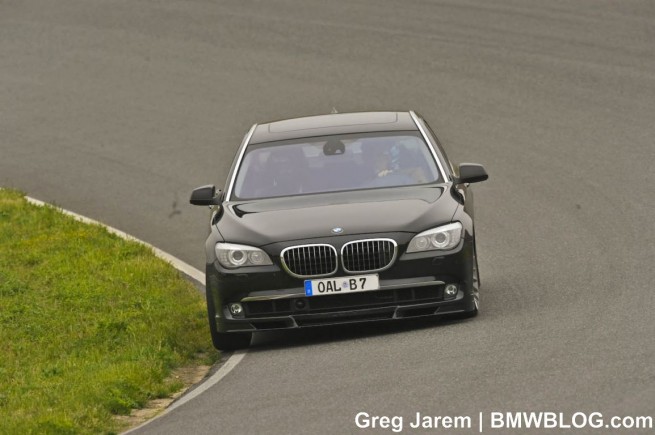 “Driving one is momentous, an experience not quickly forgotten.”

Only the M3 saw faster speeds before braking for the next corner of this track, the B7 has a special way of metamorphosing into a focused race car. I was left dumbfounded by the B7’s handling, this was easily one of the most balanced cars I’ve ever driven; overall weight in this case is less important, it is the distribution of weight and suspension set-up that determines how a car carves through corners.

The B7’s 5,864 lb Gross vehicle weight is compensated for by large, sticky tires, massive, powerful brakes and monumental horsepower. Is the B7 a weaponized track machine like the M3? No. Does the B7 perform well beyond expectations of a large performance luxury sedan? Absolutely!

A magical moment occurred while being driven in the passenger seat by Andreas Bovensiepen, proprietor of ALPINA GmbH. Three passengers piled in to enjoy a hot lap with one of racing’s most distinguished drivers, former champion of the 24 hours of Nurburgring and the German Touring Car Championship back in the ’70s. We found ourselves virtually nailed to the side bolsters of our seats through a long right hander on the race track, the scenery flying by in a way few people have seen from a car’s rear seat. Four grown adult men, helmets on, flying around a racetrack at obcene speeds being driven by one of racings finest drivers? Magic. The B7 is one of very few cars in the world that could find itself in this moment.

“Four grown adult men, helmets on, flying around a racetrack…”

The special allure of this car became clear: the B7 is an exclusive car that accomplishes everything well through a concept coined by ALPINA as “AND engineering.” Powerful and restrained. Razor sharp on the track and comfortable on the roadway. Relaxed, poised and a real animal, craving to melt the asphalt. ALPINA cars give off an aura of speed, refinement and class. Driving one is momentous, an experience not quickly forgotten. 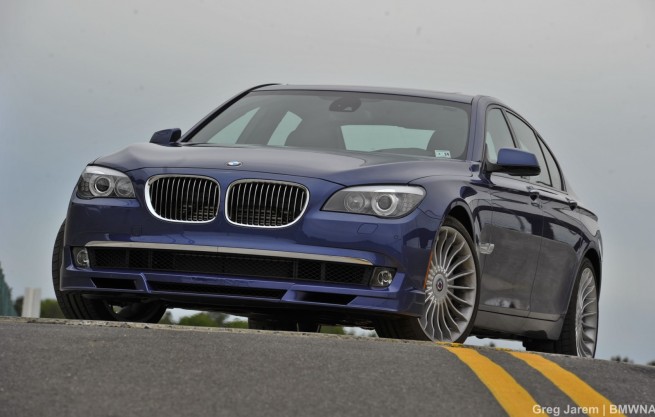 Interior appointments have not been overlooked, numerous custom changes have been made to the passenger cabin. Small, tasteful ALPINA badges pervade the cabin, the finest leather, wood and metals surround all occupants. When driven in a relaxed fashion, the ALPINA is buttery soft and smooth, concealing its bulging muscles under a thin veil of sheet metal. This car is a wolf in (a well groomed) sheep’s clothing; good at everything it does.

The epitome of power, luxury, and exclusivity awaits you; but be careful – they say this much power can corrupt. 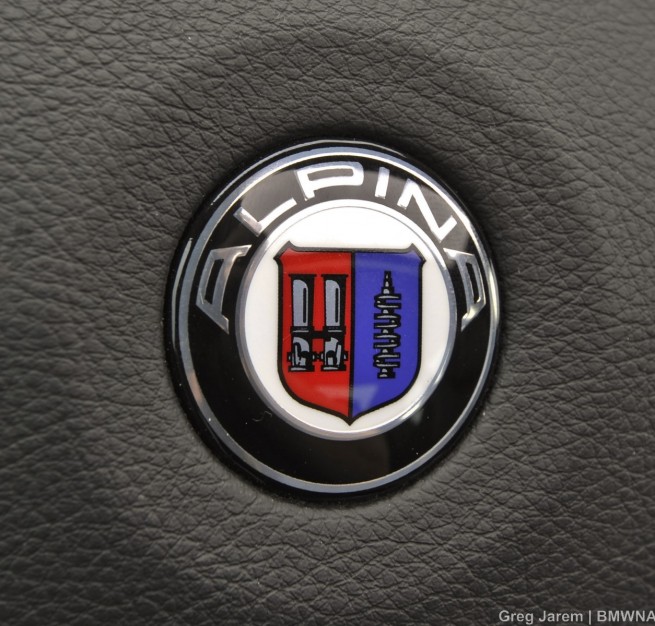 Perhaps what is most intriguing about ALPINA is its rich history. Allow us to leave you with a brief history, courtesy of ALPINA:

In 1961 Burkard Bovensiepen begins his business working exclusively with BMW.
In 1964, BMW AG and its head of sales, Paul G. Hahnemann, confirm ALPINA’s high product quality, dove-tailing the BMW and ALPINA warranties.
1978 arrives and ALPINA present a line up of complete performance cars: the first 6-cylinder 3 Series, the B6 2.8; and the turbo-charged, 300HP 5 & 6 Series-based cars.
In 1983 ALPINA are officially registered as an automobile manufacturer with the German Federal Motor Vehicle Registration Agency – now a unique entity and liable for the quality of content of the vehicles they produce.
ALPINA went on to accomplish great feats of engineering, often working in harmony with BMW engineers. In 1971, BMW appointed ALPINA as project leader for the BMW 3.0 CSL light-weight Coupé. The CSL – as offered by BMW – is reflected by the 20-spoke ALPINA wheels.
In 1986 ALPINA developed a 6-cylinder 3 Series, called the 333i for the South African market, which is sold through BMW South Africa.
In 1996, in a joint project with BMW, the BMW ALPINA B12 (7 Series) debuted with electrically-heated metal catalysts, later used in V-12 7 Series production (a first in the automotive industry!)
In a joint project initiated in 1998, ALPINA helped BMW design the six-cylinder, 3-liter BMW ALPINA D10 which produced 245bhp, a specific output of over 80bhp, not found in diesels of the day.
In 1999 ALPINA was tasked with developing a high-performance X5 Prototype, the result is convincing, and the E53 BMW X5 4,6is was born.
Technology sharing between ALPINA and BMW has been going on for decades, and both companies have mutually benefited by it.