Column: Spark Plugs – Who Needs Them?

There are moments of clarity in life when you realize that some things you were reliant upon are no longer needed.
Take for instance, the ‘Thigh Master.’ Popularized in America during the 1990’s, infomercials went on the offensive, claiming that the Thigh Master was an essential part of any workout routine. While in some households the Thigh Master was used religiously for years; the dawn of this millennium has shown that a far better workout can be accomplished using superior equipment at your local Gym. (Youtube Link)

It seems we’ve also been convinced that spark plugs are an essential part of our car’s engine. From the very beginning, spark plugs have been commonplace in automotive engines. Varying by design, some have incorporated exotic metals such as iridium and platinum, but ultimately – they create a spark for combustion as they always have.

Modern demands for increasingly efficient and environmentally friendly engines have given us pause for a moment of clarity. Advancements must be made in the design of internal combustion engines to keep in step with ever-higher fuel efficiency and emissions standards. Is it possible that someone could invent a new form of internal combustion, one that proves itself powerful and refined while extremely fuel-efficient?

Born in 1858 of Bavarian descent, Rudolf became a Refrigerator Engineer (cutting edge at the time, mind you), but his secret love was in engine design. Drawing upon his education from Munich Polytechnic, Rudolf set about on a special project; sketches, calculations and drawings accumulated before him. On August 10th 1893, Rudolf had completed his first working prototype: a single cylinder engine standing 3 meters (10ft) tall with a large flywheel at its base. That very day the giant engine roared to life, only Rudolf’s heart beating heavier and louder than his invention before him. The first revolutions of this engine had shown the world that fuel could be ignited without a spark. A year later Rudolf went on to patent his invention, proudly coining it the ‘Diesel’ engine.

By the early 1900’s Diesels started to show up in many engine applications from agriculture to marine use, transportation to factory power generation. In modern times there are diesels flying above in airplanes, powering small pumps and generators around construction sites, and powering the largest of ships and locomotives. Diesels are found globally in many places and of course, under the bonnets of our beloved BMWs.

BMW’s use of Diesel engine design stretches back to their history in aviation. In 1935 BMW developed a prototype Diesel Aircraft Engine, the BMW 114. The 114 was a 9 cylinder air-cooled radial engine displacing 27.7 Liters. No doubt smoothness and lightweight construction were hallmarks of this first BMW Diesel considering its application. Years later the same hallmarks of engineering are found in BMW’s diesel engines; only smoother, lighter and drastically more powerful. Oh, and a little bit smaller.

So how does it all work? Let’s get this Diesel spinning…

In its most simplistic form, a Diesel engine transforms the potential chemical energy of fuel into kinetic energy through ‘internal combustion’ (controlled explosions), as does any gasoline-fueled engine. The difference lies with its ignition.
Since the late 1800’s, internal combustion engines burning petroleum-based fuels used an electric spark to ignite the air-fuel mixer contained within. To this day the same basic concept of ignition is used, igniting the compressed air-fuel mixer with an electric spark generated by a spark plug.

Diesels differ in concept by igniting the air-fuel mixer without the use of sparkplugs. How is this possible, and what Law of physics did Rudolf Diesel contemplate when designing the Diesel engine?
French Chemist Joseph Louis Gay-Lussac made a discovery in 1802 that was later fundamental to the design of Rudolf’s engine. Gay-Lussac discovered a relationship between the temperature and pressure of a gas, where the temperature of a gas will increase as the pressure of this gas is increased, the volume remaining constant. Rudolf went on to determine that if he could compress a fixed volume of air to a high enough pressure within the cylinder of his engine, it’s temperature would increase to the point of ignition.

This explains the high compression ratio of a diesel engine, literally squeezing the air-fuel mixer to such a high pressure and temperature that the fuel ignites. Consider the compression ratio of the BMW 335d’s Diesel engine at 16.5:1. That is to say that in ratio, this engine takes 16.5 Liters of air and compresses it into 1 Liter of space. This also explains why traditionally Diesel engines have been heavier, the walls of the block made thicker to withstand the force of compression.

Advancements in Diesel technology have transformed what were once rough running, loud and odor emitting engines into smooth, quiet engines barely emitting a scent.
Time does not permit us to consider all of BMW’s advanced Diesel technologies in depth, but lets take a brief look at a few highlights:

Advanced Turbo Technology. The use of Variable Twin Turbos has reduced turbo lag to a thing of the past and elevated performance to levels only a sports car could claim. For an in-depth consideration of BMW’s incredible Turbo technology, please hit the jump.

Common Rail Fuel Injection. BMW has gone to great lengths to advance this technology, and are in fact leaders in the field. Common Rail Fuel Injection facilitates highly accurate fuel metering under extremely high pressures prior to injection (the latest BMW engines are injecting fuel at over 2000 BAR/29,000 PSI!). Along with the use of precision Piezo injectors, fuel is atomized and distributed for complete combustion; every droplet of fuel is translated into stump-pulling power and torque.

Diesel Particulates Filter. This technology allows for reduced emissions and the elimination of “Soot” from the exhaust. The filter unit is mounted directly on the exhaust manifold and is self-cleaning as it incinerates the particles is captures; it is 100% maintenance free.

Blue Performance Urea Injection. To nearly eliminate harmful Nitric Oxide emissions, BMW has developed a system whereby urea is injected as a catalyst to eliminate NOX in the exhaust system. The by-products are Nitrogen and water vapor, both harmless to the environment.

Aluminum Alloy Construction. The greatest adversary of a BMW performance car is weight. As mentioned earlier, Diesel engines are traditionally built heavier to withstand the higher operating forces within. The consequence of this weight penalty has always been severe – but BMW has applied their lightweight design philosophy to their Diesel lineup, and the results should have gasoline engines running for cover. BMW’s latest diesels use Aluminum Alloy for the construction of the engine block, and crankcase. On the latest 3 series, a negligible weight penalty of 150lb is added moving from the 335i to the 335d – a remarkable achievement.
There are many, many more technologies beyond those mentioned, but the message is clear: BMW has advanced the performance envelope of Diesel engines far beyond what was ever thought possible. And the best is yet to come.

BMW Motorsport plays its role in making Diesel Racing history. In the 1998 running of Le Mans, the checkered flag fell to the blur of a BMW 320d completing its final lap of the illustrious race. BMW went on to achieve great success in racing high-output Diesel engines. Stunning victories followed in the 2003 and 2004 Paris-Dakar Rally; A Twin-Turbo Diesel BMW X5 took both Checkered Flags and was the first Diesel in history to win a special stage. Audi’s success in LeMans racing gives further credence to the legitimacy of Diesel race cars.

The Vision Concept’s 3 cylinder Diesel is a technological masterpiece, and gives us a glimpse into the possible future of ///M road cars. The potent 1.5 L engine is currently the world’s most powerful Diesel relative to its specific output of 109 hp/Liter. The mighty Diesel also produces a massive 214 lb-ft of torque flat across its powerband. Applying the Vision Concept’s specific-output to the 3.0 Liter in the 335d would produce 326 hp! Consider that the E46 M3 produced 333 hp from a 3.2 liter, and the implications make our right foot very excited. 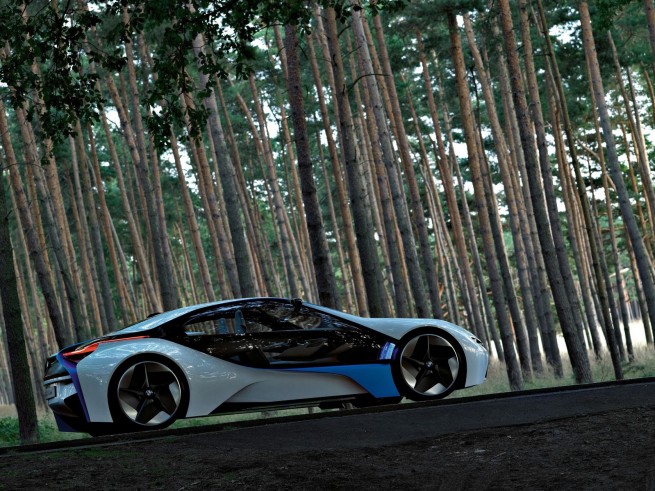 Diesel powered BMWs are not something to be scoffed at or dismissed. The unique drive characteristics of Diesel engines unleash new possibilities for what constitutes the Ultimate Driving Machine. Endless torque at all RPM; a brilliant rumble that tickles your ears and makes grown men giggle; scorching performance from high-output engines touting horsepower figures fit for the racetrack; lightweight construction that lends itself to perfect balance – begging you to carve the next corner. All while achieving phenomenal fuel mileage and efficiency, leaving the smallest imprint on the environment possible. I’m convinced that the sporting, torquey character of BMW performance Diesels should be embraced by all who love tail-out antics. The dawn of a new age of performance cars has arrived, and you can rest assured that BMW is the undisputed leader in advancing efficient, dynamic motoring.

So is there anything negative we can say about Diesels after a thorough evaluation?

Well, on the down side, Diesels have proven more expensive to manufacture since all engine components must be fortified to survive the extremely high pressures within. Of course, this also plays out as a positive factor since the robust design renders a Diesel very reliable, durable, and long lasting. Also of some concern is the lower redline of Diesel engines. As a true enthusiast of high revving engines, I admit this is a drawback for the time being. Through design, a very balanced Diesel will be able to rev well beyond the typical 5,000 RPM limit, and in time we will see higher revving diesels. Of some consolation however, is the usable powerband. With 442 lb-ft of torque on tap from 1,500 RPM on the 3.0 L TwinPower Turbo Diesel, the powerband is simply moved lower in the rev range. Picture it as though the bottom 4,000 RPM have been cut out of your S54 M3 engine; your car now idles at 4,000 RPM. Now add 190 lb-ft of torque.

This kind of thrust will make you wish for every green light to turn red.

Maybe it’s time to pull the spark plugs out of your car and find a place for them beside the Thigh Master on that dusty shelf in your garage. To those of you still on the fence about Diesels or to those who claim Diesels are dirty, please read the following sentence very carefully.

The only smoke trailing a BMW Diesel is swirling off its tires.