Along with the SIMPLE Concept revealed minutes ago, BMW sends another concept to the Museum. BMW CLEVER, short for Compact Low Emission Vehicle for Urban Transport is part of the Project i program to produce practical, low-emission city vehicles.

It’s a three-wheeled vehicle powered by a natural gas engine and measure 3 meters long, 1 meter wide and 1.4 meters tall, weighs in at under 400 kilograms.

BMW CLEVER Concept accelerates from 0 to 60 km/h in around 7 seconds, going on to a top speed of approx. 100 km/h. The two gas cylinders each contain 1.7 kilograms of CNG (Compressed Natural Gas) to provide a range of about 200 kilometers.

More information and photos in the press release below. 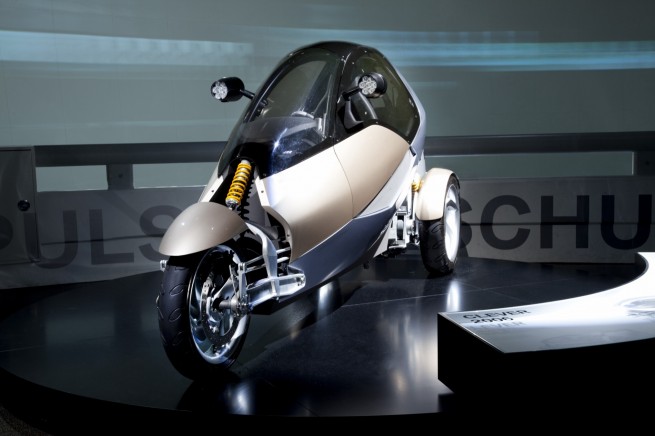 CLEVER is the acronym for “Compact Low Emission Vehicle for Urban Transport” and refers to a research project aimed at producing a low-emission, practical city vehicle. The CLEVER project was launched in 2002 as an initiative of Berlin’s Technical University, sponsored by the 5th Framework Programme of the EU Commission. Further research partners were the University of Bath, England, the Institut Français du Pétrole and the University of Natural Resources and Applied Life Sciences, Vienna. Involvement on the industry side came from Cooper-Avon Tyres Ltd., the ARC Light Metal Competence Centre Ranshofen GmbH, TAKATA-PETRI AG and WEH GmbH. The BMW Group took over the technological management and the construction of the chassis, interior and exterior. The design and the prototypes likewise came under the aegis of the BMW Group.

Being CLEVER means sitting one behind the other in a three-wheeled vehicle driven by a low-emission natural gas engine. And that adds up to low aerodynamic drag, minimal weight and a small road footprint: the research vehicle is around 3 metres long, 1 metre wide and 1.4 metres tall, weighs in at under 400 kilograms and offers no more than a square metre of frontal area to the airstream. But being CLEVER also means enjoying the riding fun of a motorcycle coupled with the safety of a passenger car. To this end, the driver and passenger sit in a crash-optimised aluminium space frame with computer-controlled tilting during cornering, offering occupants a typical two-wheeler ride experience.

Focusing on the essentials of motorised travel in city traffic thus paved the way for new technologies and innovative solutions. The tilting technology, in particular, was then a novelty in this form: the single-cylinder engine along with the seamless CVT transmission are mounted in a subframe to which both rear wheels – controlled by swing arms – are attached. The connection to the front main frame is by a central pin with two hydraulic actuators. Depending on the driving situation, these ensure that the driver and passenger lean into corners by up to 45 degrees. It makes for driving that is free of transverse forces and, for the first time, is entirely computer-controlled.

The research engineers came up with a similarly unusual solution for the front steering, which is controlled by an H-shaped swing arm. To save space and weight on the one hand, while on the other creating a secure connection to absorb energy in a frontal collision, they developed a new kind of wheel hub steering. The pivot pin around which the wheel turns during steering is located inside the wheel hub, allowing the front axle to be attached to the swing arm flanges on both sides. When the driver turns the steering wheel – which, incidentally, comes from the BMW Z4 – a steering transmission with lever arm control transmits the steering commands. This not only prompts the wheel to turn but, depending on speed, also tilts the entire passenger cell into the corner.

A paramount aim of the CLEVER was to use a drive system with minimal emissions. The stipulation of low CO2 emissions in the region of 60 grams per 100 kilometres was thus part of the brief from the start. The researchers opted for a fully developed single-cylinder engine with 230 cc displacement and output of 12.5 kW, powered by natural gas from two compressed-gas cylinders. The research vehicle accelerates from standstill to 60 km/h in around 7 seconds, going on to a top speed of approx. 100 km/h. The two gas cylinders each contain 1.7 kilograms of CNG (Compressed Natural Gas) to provide a range of about 200 kilometres. That means it costs two people 1 euro to travel around 100 kilometres. The cylinders are also designed to be easily refilled at gas filling stations as well as at home.

On a par with eco-friendliness and energy efficiency, a high level of passive safety was among the principal requirements in the brief. As in a Formula One racing car, the main frame – weighing just over 60 kg – constitutes the survival cell, while the front wheel and steering ensure a deformation path of some 35 centimetres to absorb sufficient energy in an impact. Thanks to special seat belts and a specially developed driver airbag, the research vehicle complied with the Euro NCAP crash test requirements for small cars at the time: even in a frontal collision at 56 km/h, the three-wheeled prototype offered a secure survival cell.