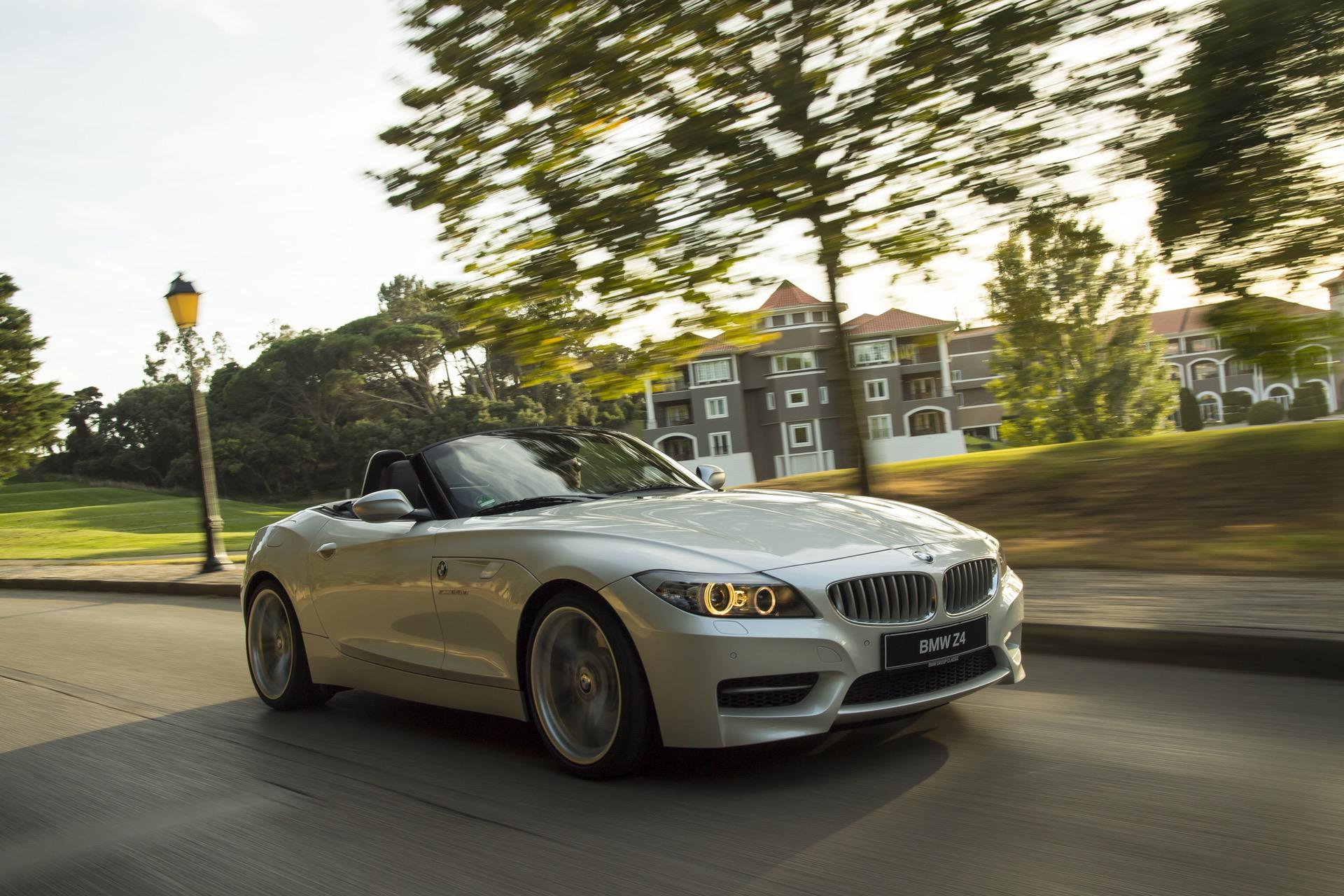 Well folks, today is finally the day we get a true glimpse at the 2009 BMW Z4 and what a glimpse it is! As BMW noted in it’s press release, the new Z4 is the first BMW  Z Series to carry a hardtop convertible. As such, this new Z4 will be a hybrid of both coupe and convertible which may leave little hope for those of us looking for a successor to the E85 coupe.

Moving on though, the new Z4 is a tour de force of  styling, technology and performance. For those of you that followed the many test mule pictures that have littered the internet the you probably already knew what to expect in terms of styling, especially based on some of the prospective spy shots we’ve shown here before. However, the Z4 looks even better than I had hoped. It retains the classic sports car layout with a potent engine tucked under a long hood with a soft, tapering tail at the rear.

The cut lines that glide down the car from wheel well to wheel well are a strong evolution of the original flame surfacing lines seen on the previous generation Z4. These same cut lines are then accentuated by the fender inlets behind the front wheels, a styling cue taken directly from the CS Concept and already spotted on the new F01 7 Series.

Speaking of the CS Concept, strong cues of the CS Concepts nose are found in the nose of BMW’s new land shark. The protruding, wider grill is the most distinct feature of this car and taken directly from the CS. The headlamps of the new Z4 also share CS DNA coupled with an evolution of the previous Z4’s headlamp architecture. On the flip side, at the new Z4’s rear, we see more styling cues drawn from the current 6 Series with the tail lamps while style retaining the prior Z4’s general shape though the rear deck does have more of a supple, gradual slope compared to the very shear, sharp drop of the rear deck of the old Z4.

Moving inside the car, we see an interior that almost exactly duplicates that of the CS Concept’s. In my opinion, this interior really focuses the dash and instruments much more toward the driver, which is thankfully the opposite of the direction BMW’s interiors had been moving. Granted it’s difficult to tell, but the fit and finish of interior appears to be very refined and polished and pulls design cues from the CS again with the electronic handbrake and the unfortunately goofy looking shifter on automatic/DCT models. That said, the Z4 will be a very comfortable, cozy place  to be that wraps around it’s occupants juxtaposed to the somewhat expansive, long dash-laden interior of the previous Z4.

Outside of styling, the Z4 brings a lot of the new techno goodies that BMW has been working on. Just to name a few, we’ll see a new 7-Speed DCT transmission, the improved iDrive interface, electronic handbrake, Dynamic Drive Control – which makes the suspension adjustable(my favorite new option!) Needless to say, the new Z4 will pack the pinnacle of BMW’s current road-going technology. Who said Audi’s the only one with the mantra “Vorsprung durch Technic?”

Now, for the most important bit. How’s it going to perform? It’s going to perform pretty damn well actually! As many had hoped, the new Z4 will come equipped with the award-winning 3.0L twin turbo inline-6, which should keep all of the enthusiast crowd happy until BMW graces us with the M variant. The 300 horsepower engine can be coupled to not only a 6-speed manual but the new dual-clutch 7 speed automatic which will likely shift faster than the traditional manual transmission.

The twin turbo will also be complimented by what many of the US BMW enthusiasts will recognize as the E90 330i engine: the 3.0L 255 HP inline-6. While the twin turbo version with DCT will weigh in just shy of 3,300 lbs, don’t fret, it’ll still do the 0 to 60 time in 5.0 seconds flat or likely faster given BMW’s traditionally conservative performance ratings. So, we’ve got another BMW that’s treading heavily into Porsche 911/Cayman territory? Sounds good to me.

Before you get all excited and run to the phone to call your dealer, you’ve got to get this new naming system for the car down, otherwise your dealer won’t have a clue which engine you want. Thanks to ridiculous laws requiring more clear, non-letter/number nomenclature for model names, the new Z4 will be called the BMW Z4 sDrive35i which stands for “Sports Driver 3.5L injection” – I think, that’s my best guess for this new, terrible naming system.

I much prefer the Z4 3.0Si, a throwback to the model numbering of the 1970’s. So, if you don’t feel like dropping a ton of coin on the top-of-the-line twin turbo sDrive35i then spring for the sDrive30i which should likely start somewhere in the low-to-mid $40’s. Look for the new Z4 to officially drop on dealerships May 9, 2009 according to BMW.

Look for us to have a review and further information as we learn more on BMW’s hot new roadster.