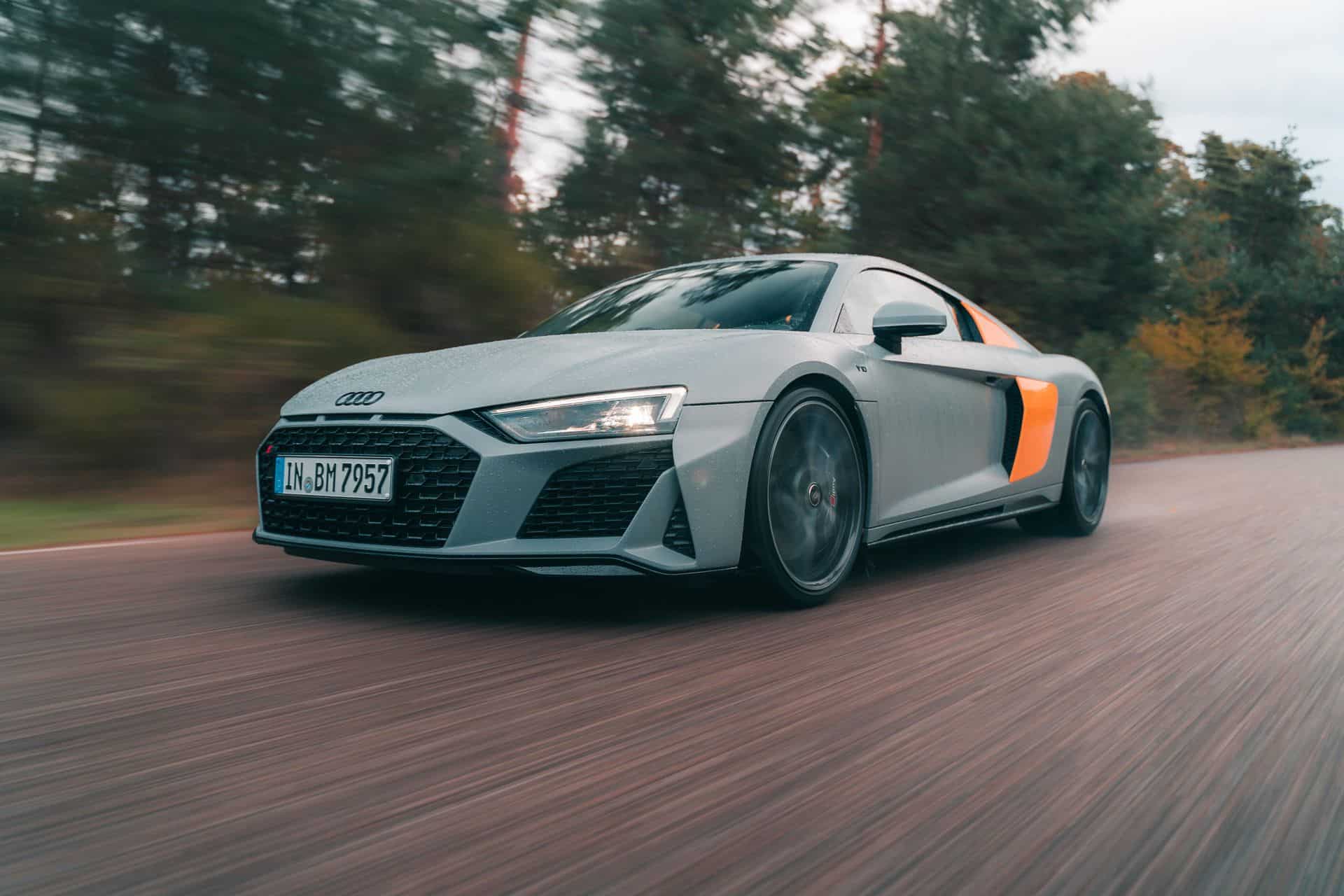 The 602-hp GT is the final sendoff to the mid-engine Audi R8 and I wanted to test it before it bows out. The R8 might not have a BMW counterpart, but it will certainly go down in history as one of the most iconic cars in the world. The V10-powered R8 has been on sale since 2006 and Audi already confirmed that it will be replaced by a fully electric model.

Starting the story about the latest iteration of the charismatic model which lives at Audi’s top of the food chain is more difficult than I thought. Mainly because the Audi R8 has been part of my personal journey throughout the world of automotive journalism. Ever since I started to write about cars, the Audi R8 had a fascinating impact on me. Mainly because it was the most approachable supercar that was within reach when I returned an S5 Convertible or a new TDI-powered A3. The R8 was always there in the same press parking garage waiting for that moment I could give it a GO, which in the end happened quite often the past 15 years.

The R8 is therefore not new to me, however the last time that I drove one was four years ago in Dubai, and we had two cars; the R8 V10 Spyder and the RWS, a limited edition rear-wheel-drive version which had its front-wheel drivetrain removed. Only 999 units would ever be made. Earlier this year, I was handed the keys for two weeks.

Not your average specification though, the Germans parked a Coupe variant in front of my door dressed in an individual paint finish combining a Nardo Grey matte effect with side blades in Vegas yellow. Inside, the bucket seats were dressed in fine jet grey/black perforated Nappa leather, with stitching in Calendula yellow as well as air vents and decorative inlays in Vegas yellow fitting the outside color details.

As many you may know, the Audi R8 and its fabulous naturally-aspirated V10 are on borrowed time. The supercar is on its way out and with the release of the new farewell model, the R8 GT, we are going to say goodbye to the R8 in the next 1-1.5 years. You could say this story is even a bit of a farewell to the storyline I had with the supercar which changed Audi’s sporty image forever.

But before we are going to contemplate about Audi’s upcoming all-electric replacement, let’s talk cylinders and displacement. The RWD Performance offers 30 horsepower more than its none performance version and has 10 Nm of torque more. The vehicle is 50 hp and 30 Nm down on the Quattro variant, which is also 60 kilograms heavier (80 kg when you have the Spyder). The top speed is set at 329 km/h (204 mph), which is slightly lower than the 4WD variant. A sprint from zero to 100kmh goes in 3.7 seconds which is considerably slower than its Quattro counterpart which needs 3.1 seconds.

All nothing to be ashamed about, but while driving you notice the absence of the additional punch from the Quattro model. The RWD is truly a different animal and shows this in its own right. There are a few noticeable differences such as the 19-inch wheels, steel brakes and body coloured ‘side blade’ air intakes, where the Performance quattro gets 20-inchers, carbon-ceramics and dark exterior trim as standard. My test car came with the 20-inch five-spoke V-design Evo wheels in anthracite black.

Jumping behind the wheel lets you experience it’s unique character. A level of driving dynamics not often found anymore in the current age of turbocharged sports and supercars. The Audi lacks low-down, or even mid-range, torque. You really need to work the car and decide which gear to select via the cheap-looking paddle shifters before you eventually floor the throttle. It is not as easy to get its full potential, you need to think and work, which feels immensely old school and not reminiscent of what you would expect in this day and age.

The story continues when you take on the steering and attack some corners. The back-to-basics dynamics shine through the steering feel. Audi’s Dynamic Steering was fitted to the R8 RWD, and it felt oddly out of place requiring you to turn in sooner than you were normally intending to do. The additional lock provided some kind of disconnect with the car, which could be my personal feeling of having experienced similar Italian versions from Sant’Agata Bolognese, which are able to provide a better connection with the driver or previous encounters with the older versions of the R8 which felt more natural.

The ride is firm, but never uncomfortable on decent roads. In the end, it is still a supercar, although adaptive dampers would have been a wonderful addition. The vehicle is definitely more lively than its Quattro counterpart, but it is not more dynamic. In many ways the absence of the driven front wheels takes something away I so loved from the R8. Not that the difference is night and day, but for those familiar with the true nature and heritage of the R-model will understand what I mean when I say that a RWD R8 doesn’t really feel familiar Audi.

All in all, I won’t deny that the Audi R8 V10 Performance RWD is still a compelling package. Especially if you look at the current market space where there aren’t that many new supercars within the same price bracket as this R8. For those considering the supercar from Ingolstadt, you need to look at it from a different perspective where the old-fashioned nature of the car is able to overload you with a combination of its brilliant sound track, the mechanical identity of its limited-slip diff and the fact that you don’t have those adaptive dampers. Almost a unicorn in the current world where you can alter anything fit the flick of a switch.

All of this absence and simplicity make the R8 Performance RWD so interesting and easy to drive with linear performance delivered straight and true. The car feels small around you within its sensible dimensions. It shows familiarity throughout the cabin with switches we have seen before, menu interfaces which require a moment to think and buttons on the steering wheel which let you select the performance modes and open up the exhaust. It is a shame that all the characteristic pops & bangs have been muted due to emission and noise legislations in Europe.

The everyday supercar is what we know the Audi R8 for, and this R8 V10 Performance RWD model is nothing other than that. The new model fits well within a long history of Audi supercars, and lets us still taste the sheer loveliness of a natural aspirated V10 engine mid-mounted behind your ears.

It’s a wonderful choice for those of you drivers who want to enjoy their supercar every day of the week, and who are connected to the heritage of a model and its powertrain which will leave our shores soon never to return again. So maybe not everyone’s current cup of tea, but definitely one that will be sorely missed next year. Goodbye Audi R8, it has been a wonderful ride… 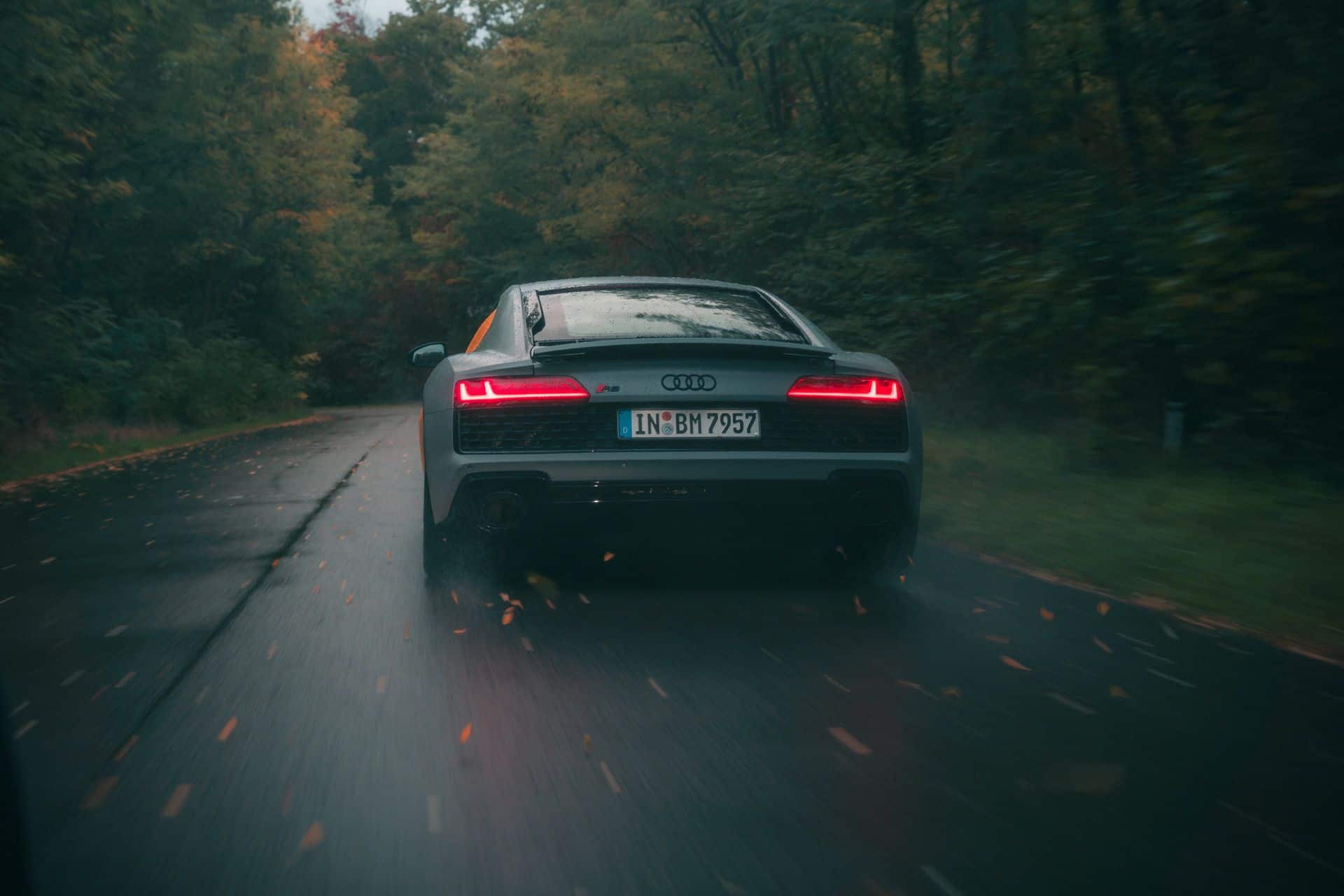 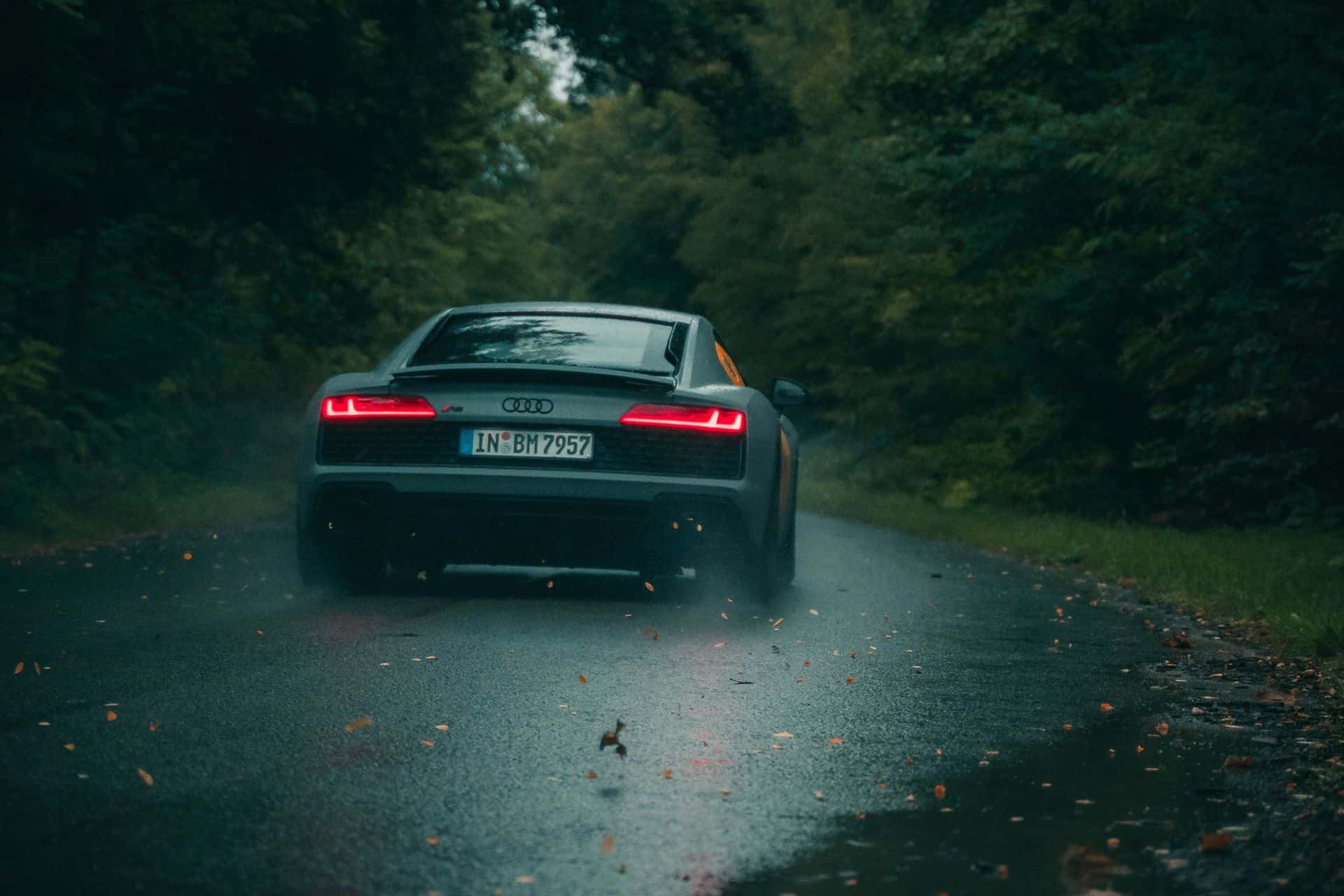 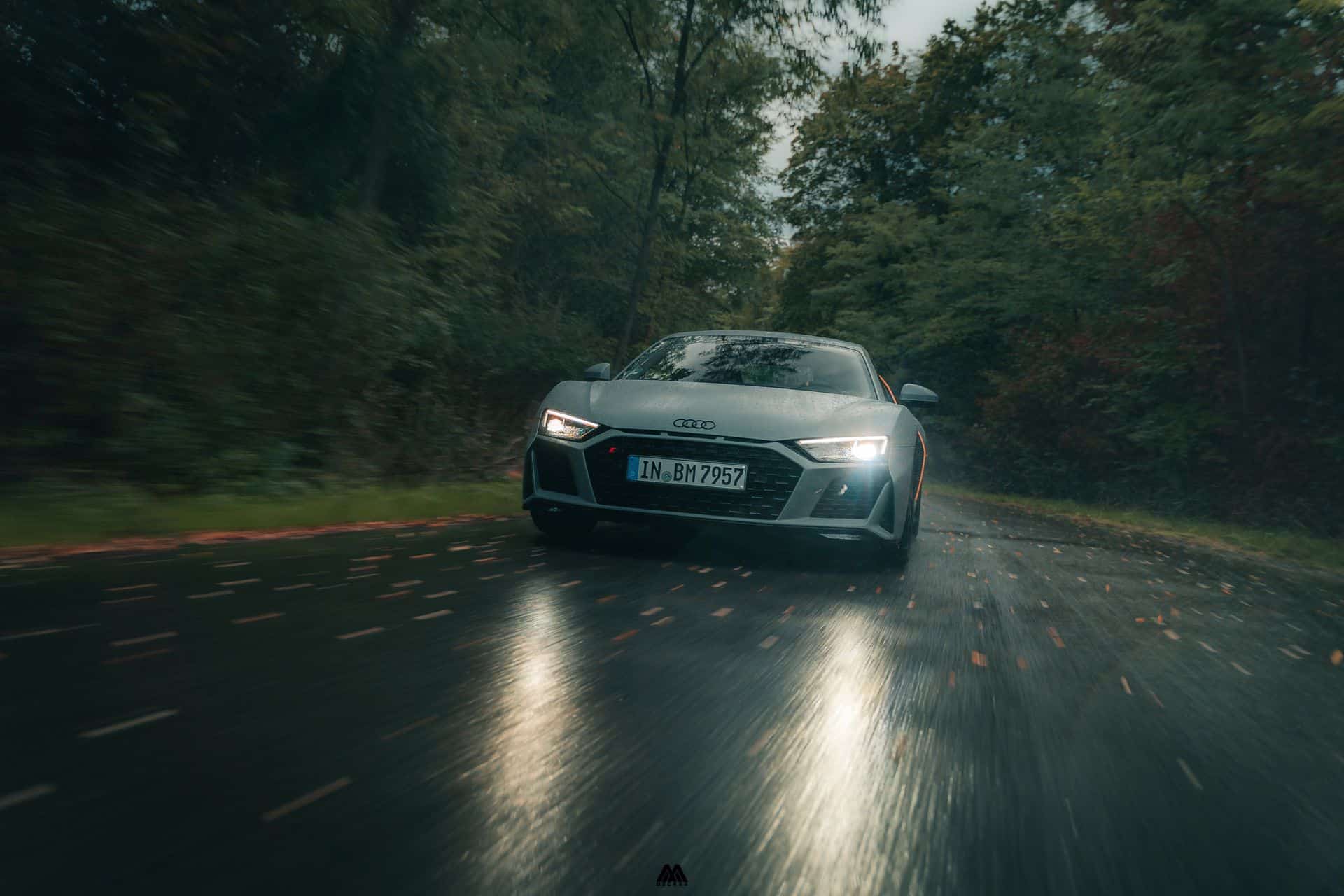 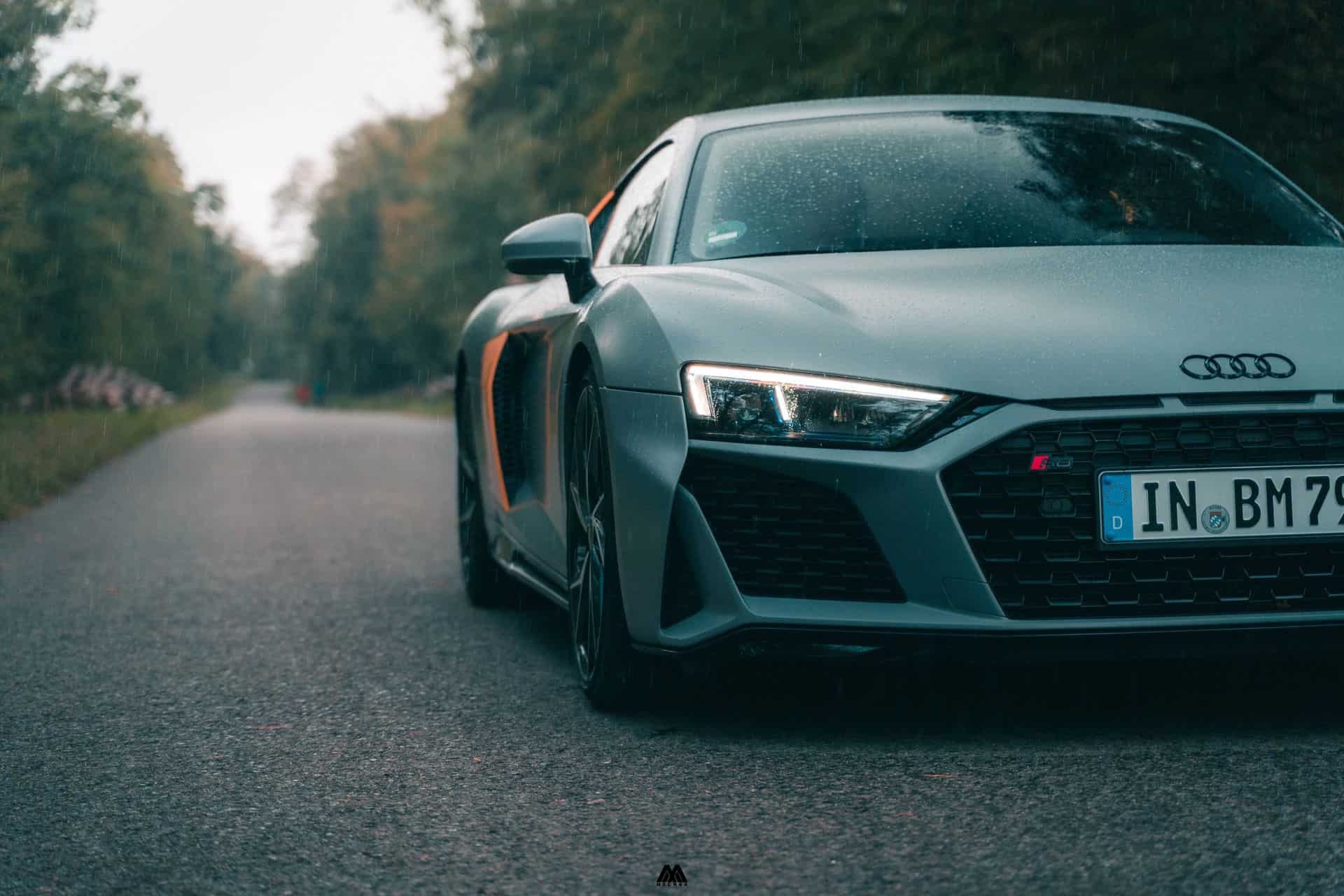 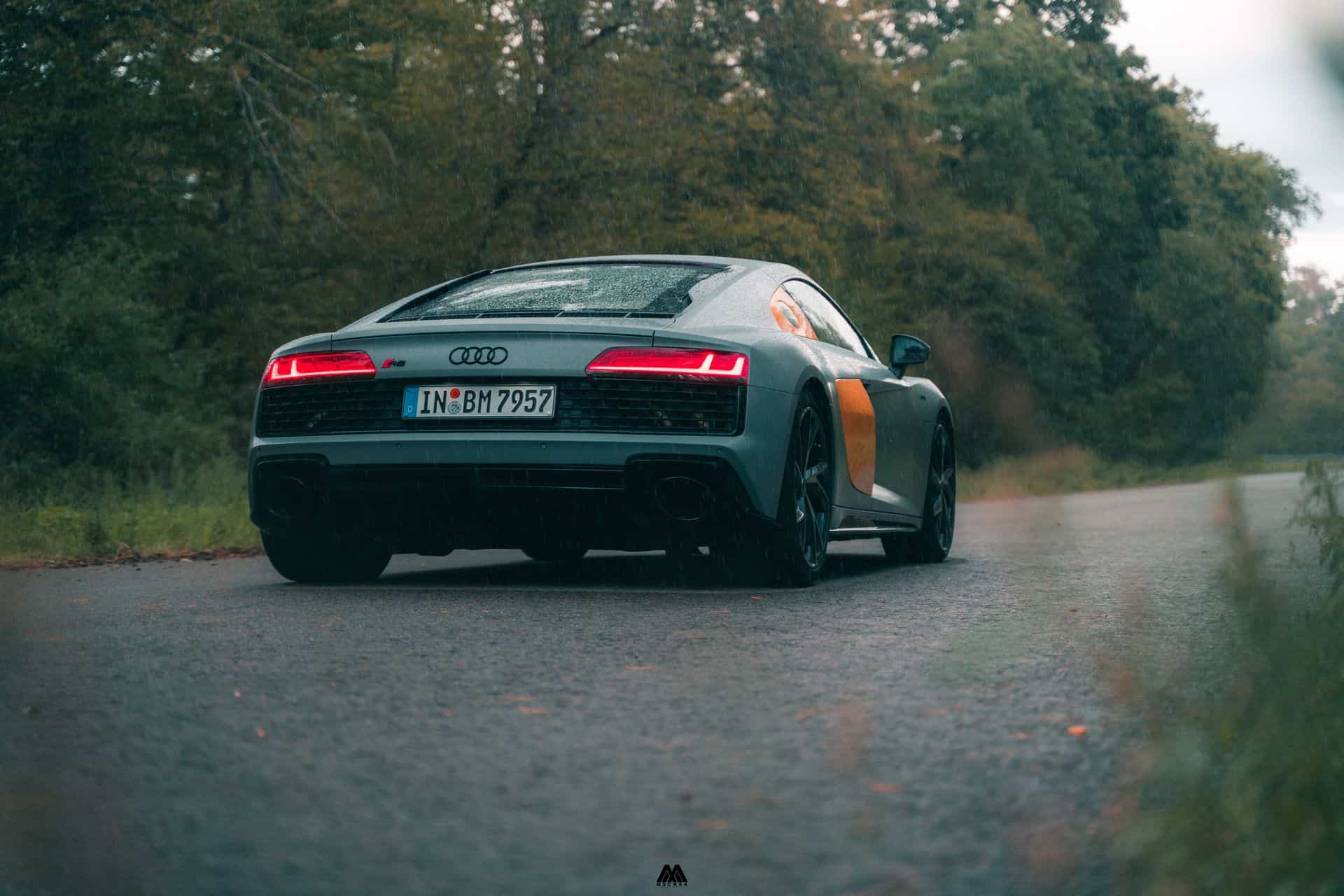 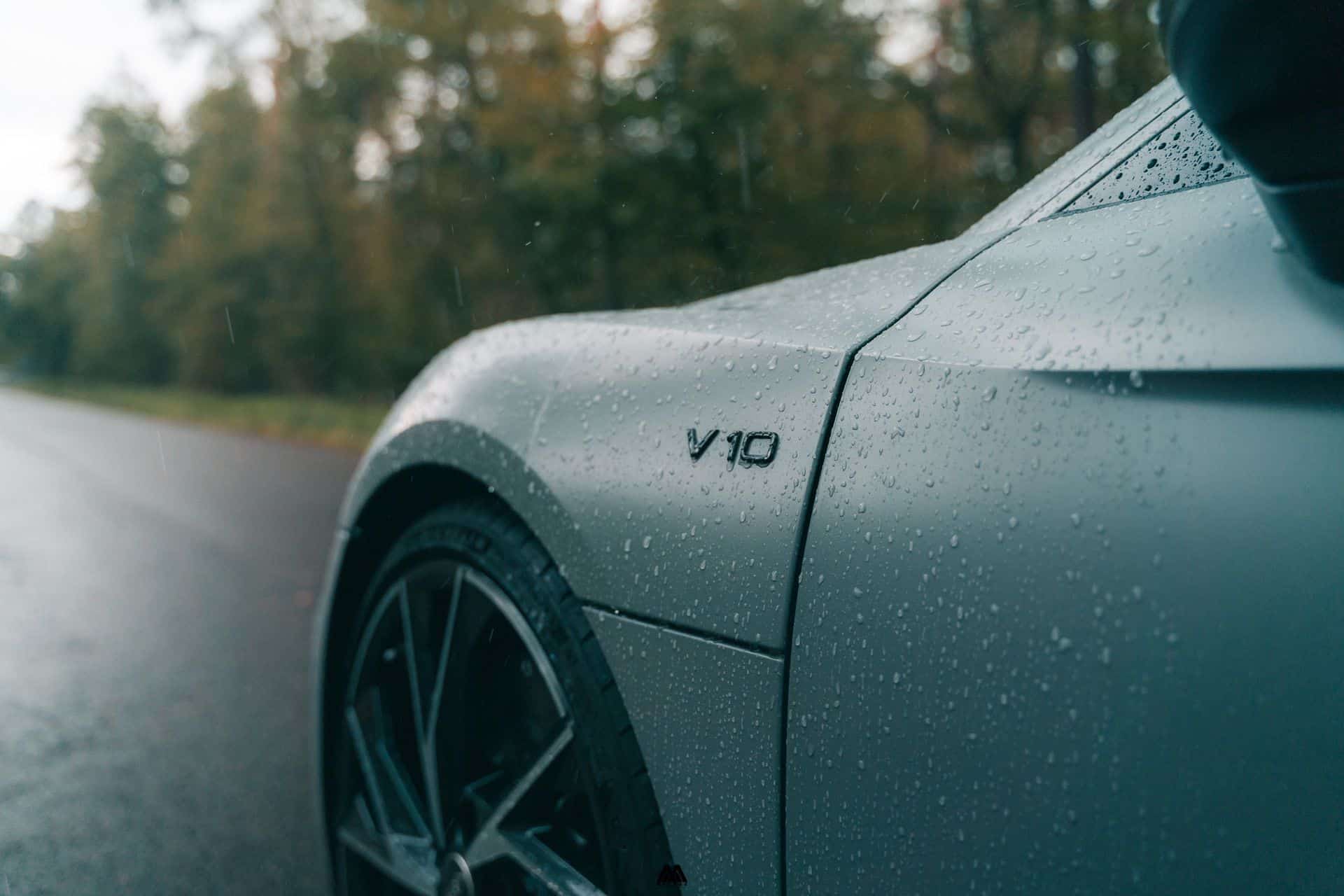 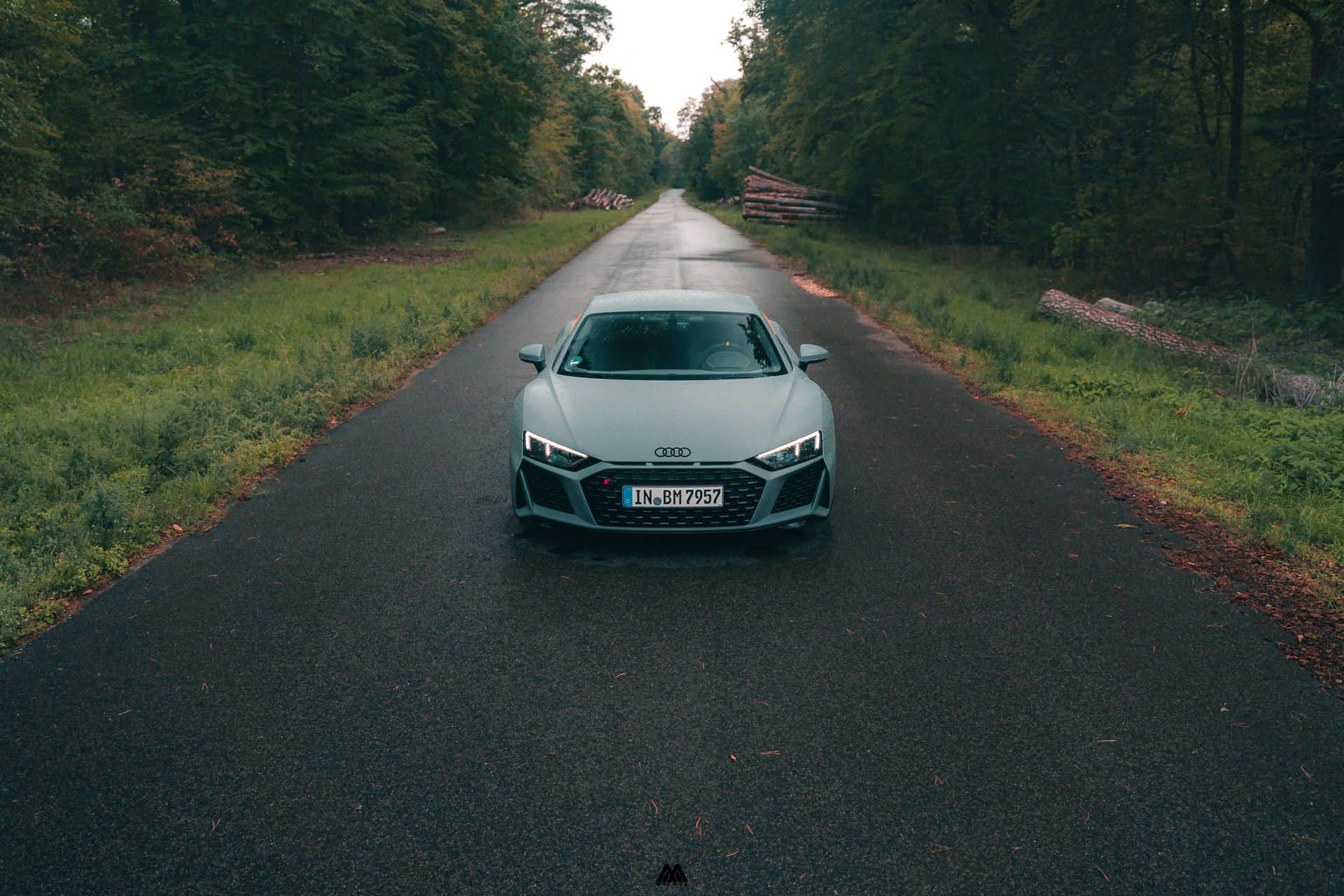 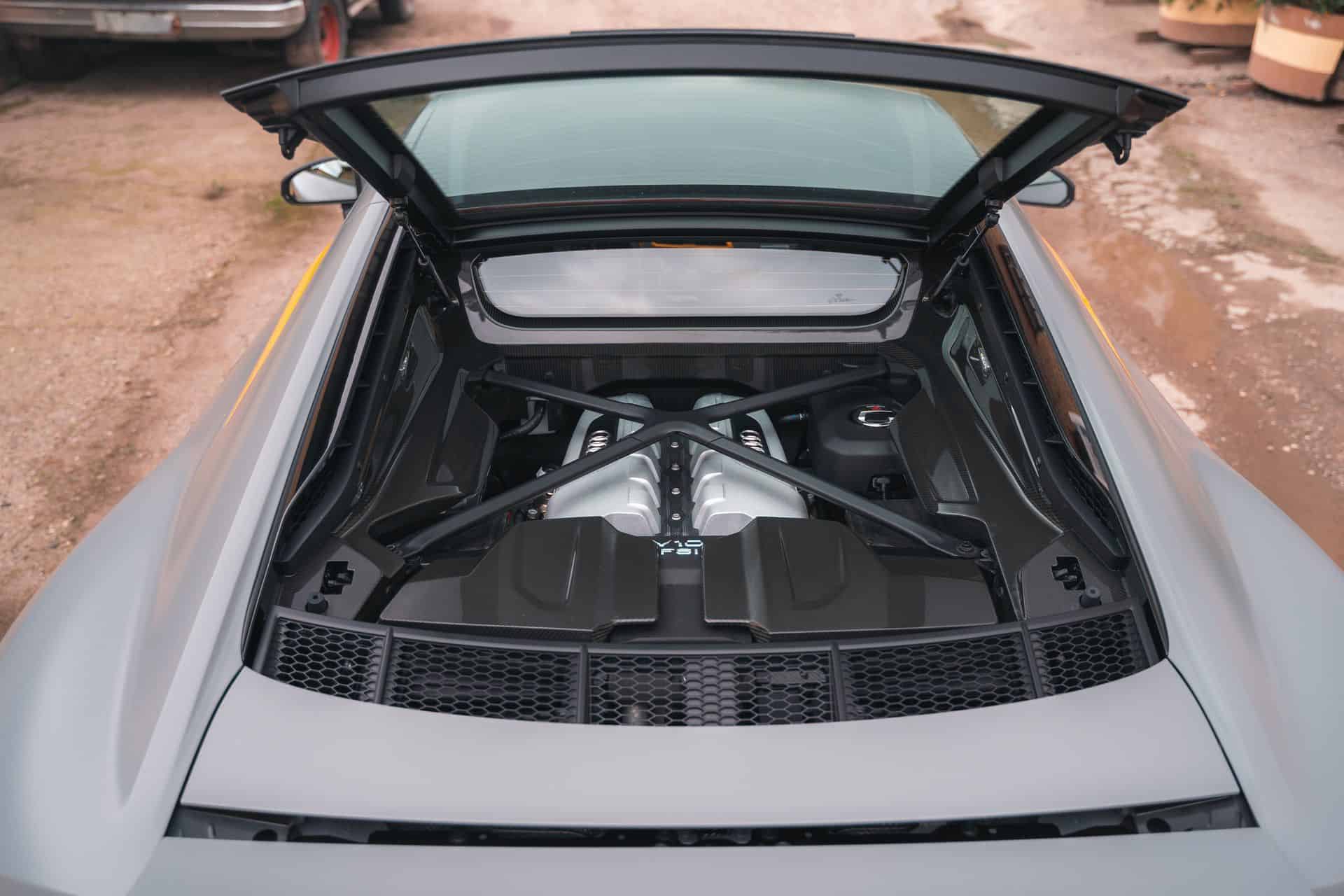 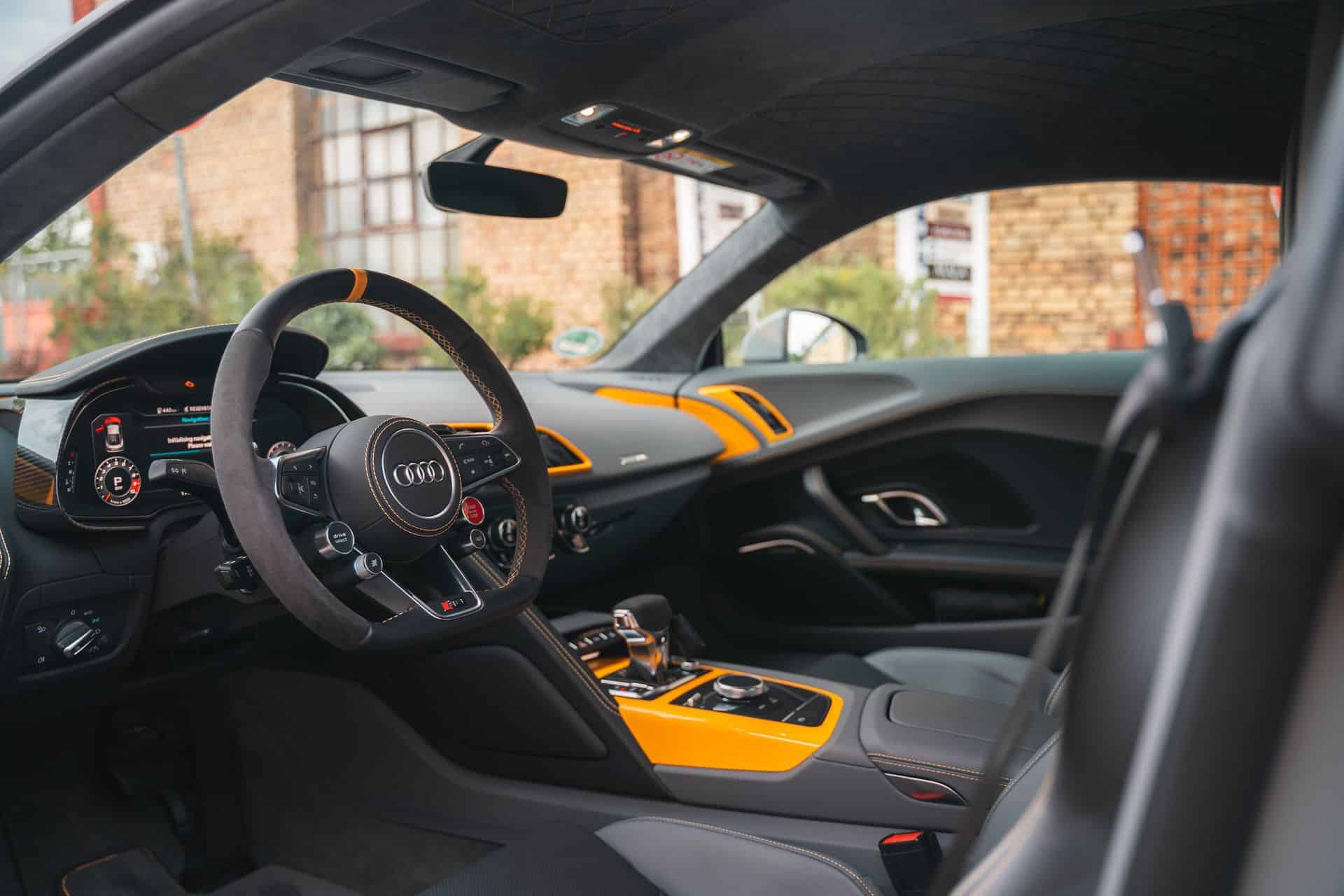