The ninth stage of the 2021 Dakar Rally brought good news for MINI fans. Stephane Peterhansel and his X-Raid MINI buggy managed to extend his lead in front of his main rival, Nasser Al-Attiyah, following the first stage win from the Frenchman. It took nine stages for him to get a win but he finally did it and is heading towards a record-breaking run once again, with the 14th title in the line of sight.

It was a good run from Peterhansel from start to finish. In the first part of the stage the two top drivers in the competition were separated by just six minutes but the consistency of Peterhansel was hard to match for Al-Attiyah. The Toyota driver also had some bad luck, two punctures and a navigation error forcing him to settle for second place. The Quatari driver is now 18 minutes behind the Frenchman in the overall standings. 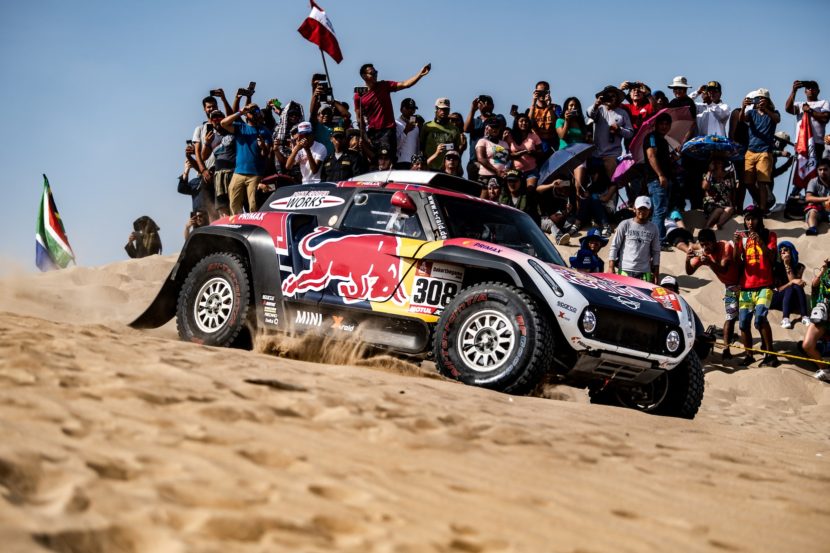 Third-place Carlos Sainz also had a difficult day, with some technical issues hindering his performance. Fixing a brake problem on his MINI X-Raid buggy meant Sainz crossed the line 22 minutes behind the leader. And yet, he wasn’t third. The podium on Stage 9 was completed by Giniel de Villiers who crossed the line just 19 seconds after Al-Attiyah did, putting in a great performance in his Toyota Hilux.

At the moment Peterhansel is still in the lead, with 17 minutes and 50 seconds to spare compared to Nasser Al-Attiyah who is in second place. Carlos Sainz is still third overall, with 1 hour, 2 minutes and 25 seconds to make up for. Jakub Przygonski with his Toyota are fourth while Nani Roma comes in fifth at the moment, being 2 hours 42 minutes and 38 seconds behind the leader as we’re heading into the final three stages of this year’s Dakar Rally. 2021 could very well mark the moment Peterhansel wins his 14th title.