VIDEO: How to Upgrade Your F80 BMW M3 iDrive Screen

One of the pitfalls of buying an older car is that you’re getting older technology. After seeing some of the new tech in modern BMWs, it might be tough to go backward and get some older tech in cars that are only a few years old. However, there are some ways to get around that old tech and retro-fit some of BMW’s newer tech into an older car. For example, this video shows you how to upgrade the iDrive screen in an F80 BMW M3 or F82 BMW M4 (or any F-series car, to be honest).

Essentially, this upgrade replaces the stock iDrive screen in the F80 BMW M3 with the larger one found in newer BMWs. The newer screen isn’t some aftermarket part with questionable reliability or quality, either. It’s a factory BMW part that you can actually source from BMW. So it will not only work perfectly but it also looks cohesive and like it fits the car. It’s also not only larger but is a touchscreen unit, so it adds touch-capability to your F80 M3 (or whatever other F-series Bimmer you have) that didn’t previously have it. 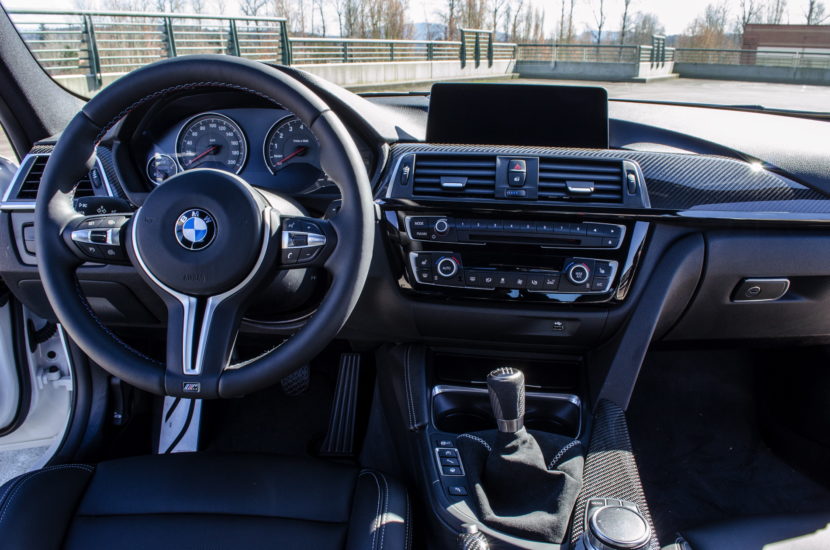 It’s not a super complicated install, either. Admittedly, it’s a bit risky as you have to physically modify the new screen to fit. Its brackets are a bit too big and so too is the plastic housing for the screen. So it needs to be cut back a bit, in order to fit properly. Considering the new screen is not cheap, that might give some owners a bit of anxiety, especially because you can break the new screen if you’re not careful. That said, once it’s done, it’s almost plug-and-play.

After the screen is installed, you need to adjust the car’s code before plugging it back in. That’s not a problem, honestly, because OBD coders are not only common today but they’re easier to use than ever before, thanks to mobile app integration. So you just plug the coder into the OBD port (which is something you should invest in anyway, as they can be incredibly useful), connect to it with your phone and just go through different setting and check some different boxes. All of which are listed in this video.

Once that’s all done, you plug the screen in, turn the car on and voila, it’s done. Now you have a larger, clearer touchscreen iDrive unit that not only looks better than before but adds better usability. So your older car doesn’t seem as old anymore. It must be said that this should only be done on cars out of warranty. Replacing the iDrive screen is certainly going to void your factory warranty. But if your M3 is no longer under warrant, have at it.