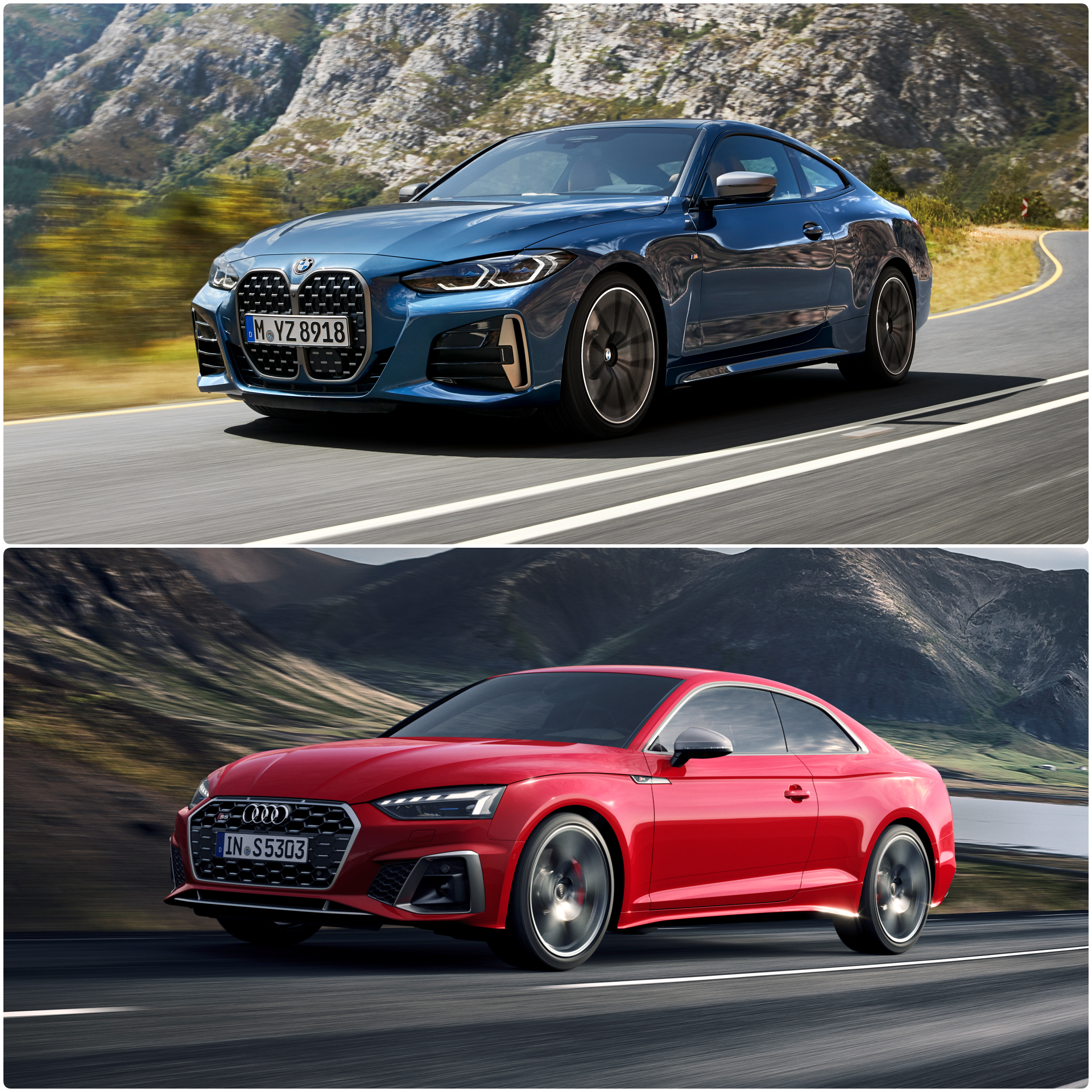 The two Bavarian premium mid-class coupes go head to head in a visual competition to find out which one is the most appealing. Looking at the new BMW 4 Series Coupe and the Audi S5 Coupe facelift, I came to realize that the two contenders share some very similar silhouette and body accents. However, the minute details and the recognizable styling philosophies set the two cars apart and individualize their characters.

I decided to put the new BMW M440i xDrive Coupe against its arch-rival from Ingolstadt – the recently revised Audi S5 Coupe TDI. To be honest, it is quite difficult to pick a definitive favorite of the two, objectively thinking.

Both the Audi and BMW have built a strong image for their midsized premium coupes. Although the design of the 2-door S5 was conceived almost 6-7 years, the Audi is still a pretty tough competitor in the looks department.

If we are to compare the front fascias of the two models, we can depict certain similarities, like the large-sized grilles. Of course, in the of the G22 4 Series, we are talking about a complete premiere when it comes to the huge kidney grilles transferred from the Concept 4 showcar.

The Audi S5 Coupe TDI displays more upright, rectangular shapes and details with a specific aluminum matte finish for the air vent details and the single-frame grille. The LED headlights have been slightly revised this year and still remain highly attractive and elegant.

On the M440i xDrive, the front air intakes are simply enormous to say, further underlining the aggressiveness and sheer muscularity of the front end. The new 4 Series Coupe also boasts a set of impressively styled headlights, with an iconic light signature joining the ultimate BMW Laser technology.

On the M440i xDrive (including the M440d xDrive), the kidney grille frame, the mesh design of it, the aerodynamics body accents, the exterior mirror caps and the exhaust pipe finishers are painted in Cerium Grey.

At the rear end, we are again faced with some similarities regarding some lines and overall architecture, yet the distinctive design philosophies of the two Bavarian brands further individualized their models.

The Bimmer boasts newly designed, “L” shaped tail lamps with darkened out inlays and an iconic glow at night. The exhausts have a dual setup and a highly spectacular trapezoidal shape, together with glossy black diffuser area and the air vents on the rear bumper.

The S5 Coupe is more traditional, exposing simple and clean styled tail lamps, together with circular quad exhaust pipes. The aerodynamic diffuser does not take that much surface compared to the M440i xDrive.

The two competitors show a clean surfacing on their side profiles, boasting a powerful character and a muscular flank sculpturing. The side window line is also slightly similar. The new 4 Series Coupe gets slightly less glass surface, an upwards contour line and a completely reshaped Hofmeister kink.

However, the Bimmer is better proportioned and looks slender and more dynamic than the Audi, which is underpinned by a front-wheel drive technical platform.

The cabin of the two Bavarians are the beholder of radically different styling philosophies. While the dashboard of the Audi S5 has been slightly updated for this year’s facelift, it can’t help pretty much to hide its age.

The bigger, centrally-mounted display with touchscreen capability looks a bit like an after-thought. Like on the A4/S4 facelift generation, the round MMI controller has been discontinued on the new Audi A5/S5 models as well.

In the new BMW 4 Series Coupe, you receive a harmonious blend between the classic BMW dashboard architecture and the futuristic, modern and fully connected design language.

The Live Cockpit looks a bit better than Audi’s digital instrument cluster, boasting a clean structure and impeccable, premium quality graphics. And the BMW infotainment concept gravitating around the BMW OS 7.0 technology is miles ahead of the one on Audi in all aspects.

Furthermore, the dashboard of the new 4 Series Coupe is inspired by the 3 Series, showcasing a reduced number of physical buttons and approaching a more minimalistic philosophy.

As many other new BMW models, still boasts a complex and multifunctional digital operation concept, which gathers the touch-sensitive Control Display, the iDrive rotary controller, the spoken instructions thanks to the BMW Intelligent Personal Assistant, as well as gestures and control buttons on the steering wheel.

When it comes to powertrains, BMW now offers two range-topping M Performance variants, which look exactly the same outside, but run on diesel and petrol.

The petrol-fed M440i xDrive boasts 374 PS (368 hp), whereas the mild hybrid diesel engine on the new M440d xDrive is good for 340 PS (335 hp). So, given the fact that Audi offers only a diesel-powered S5, the M440d xDrive is Munich’s closest match for the rival from Ingolstadt.

Let’s do the math for this visual contest:

With 4 points vs. 2 points, the new BMW M440i xDrive is the clear winner of this challenge ahead of the Audi S5 Coupe TDI, thanks to its monumentally controversial and dynamic exterior design and the classy, elegant and modern interior.

But also, the Audi will always remain quite an outstanding competitor and, surely, a very attractive car overall.

So, in the end, we want to know which is your favorite of the two.