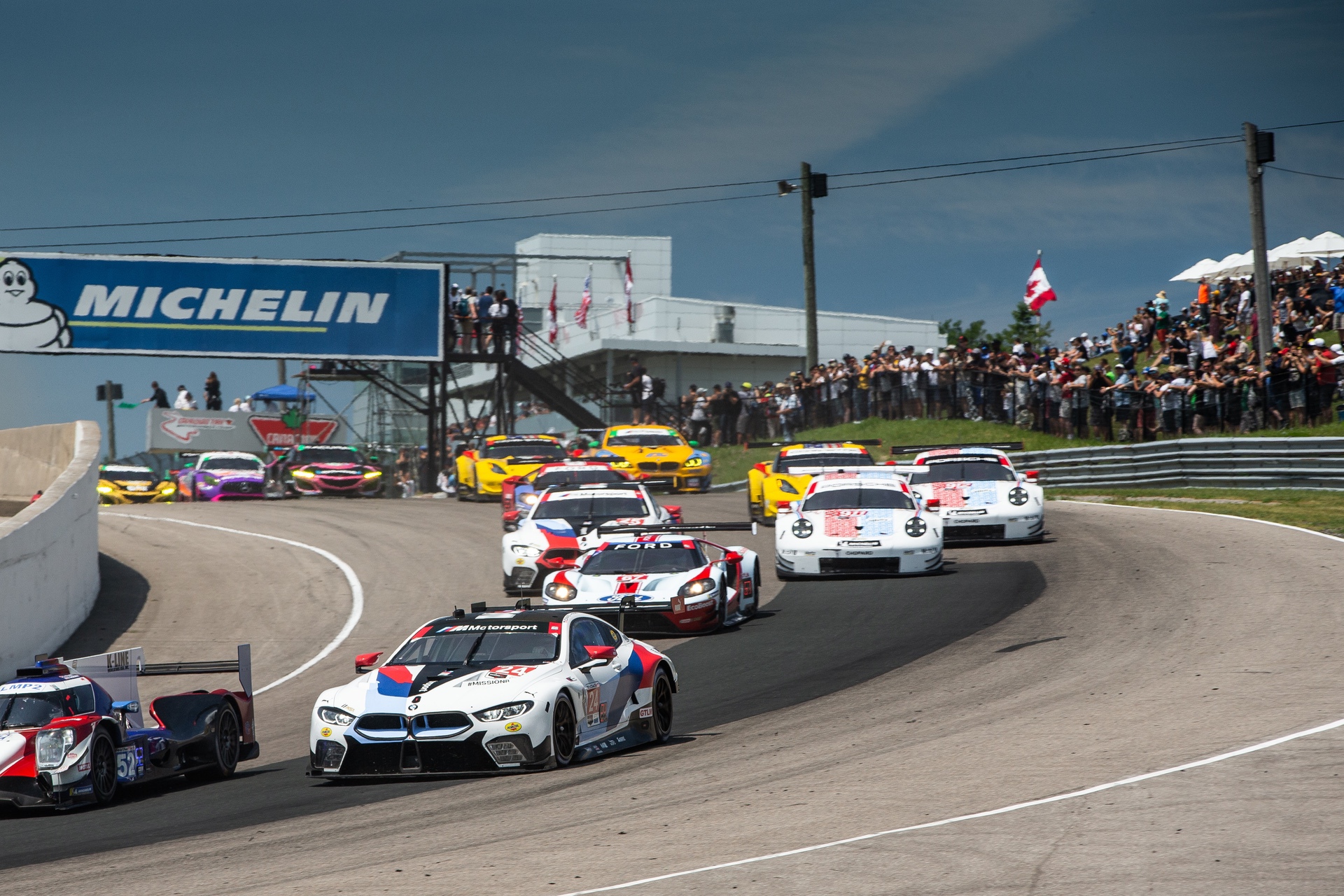 BMW Team RLL finished second and fourth in today’s two-hour-and-forty-minute IMSA WeatherTech SportsCar Championship Mobil 1 Sportscar Grand Prix presented by Acura. John Edwards and Jesse Krohn scored the runner-up finish after starting from the pole position, finishing 1.778 seconds behind the winning Porsche 911 RSR. The result was the first podium of the season for the No. 24 BMW M8 GTE and moves BMW back to second place in GTLM class manufacturer points standings. Tom Blomqvist and Connor De Phillippi finished fourth in the No. 25 BMW M8 GTE, less than nine seconds behind their teammates. 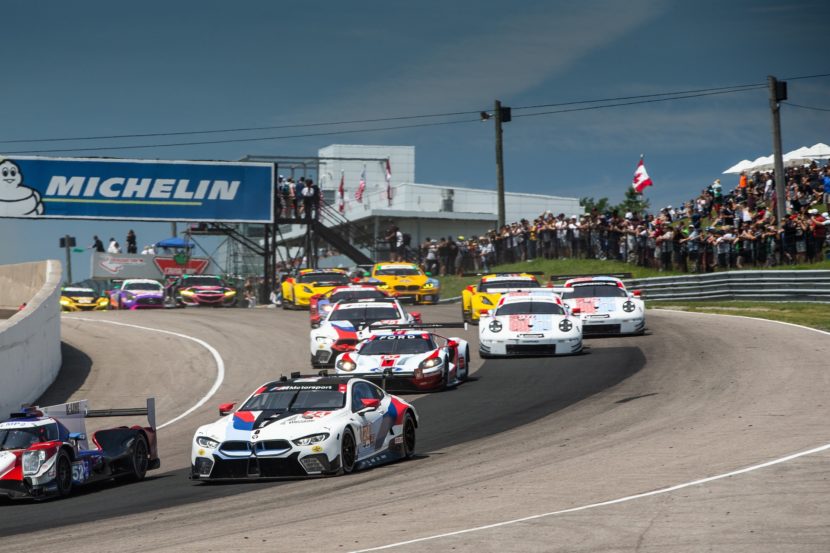 Locking out the GTLM class front row in yesterday’s qualifying, polesitter Jesse Krohn opened a gap to the field in the No. 24 BMW M8 GTE after the green flag waved, to lead by 3.5 seconds after the opening 30 minutes were completed. Tom Blomqvist, in the No. 25 M8 GTE, fell back from his outside front row starting spot to run in fifth place. Blomqvist pitted on lap 39, just before the one hour mark, to hand off to De Phillippi. Carrying a 15 second lead, Krohn pitted six laps later to turn the No. 24 M8 over to Edwards.

With just over one hour remaining in the race and 77 laps completed in the GTLM class contest, BMW Team RLL began planning their final pit stops. Edwards rejoined in second, 12 seconds from the leader. De Phillippi raced in third, some five seconds behind his teammate. De Phillippi and the No. 25 M8 was the first to stop for service, Edwards and the No. 24 machine stopped three laps later for new Michelin tires and fuel. All GTLM class competitors completed their second pit stops before the race’s first caution flag waved after almost two hours of green flag racing. The yellow flag packed up the field and, with Edwards in second and De Phillippi in fourth, the race to the checkered flag began as the green flag waved on lap 92. A scary crash involving a prototype car brought out a second yellow and then a red flag with 30 minutes to go. The restart left a hard 17 minutes of racing with BMW ultimately second and fourth at the checkered flag.

“This was a good bounce back after a tough weekend at the Glen,” said Brandon Fry, RLL Technical Director. “Both of our BMWs were competitive, but we just did not have quite enough for the Porsches at the end. We will regroup and come back after them at Lime Rock. Congratulations to our BMW brothers at Turner Motorsport for their first win of the season and to Bill (Auberlen) for his 59th all-time victory.”

Lime Rock Park, in Lakeville, Conn., will host the next round of the IMSA WeatherTech SportsCar Championship on July 20 with the Northeast Grand Prix. The two-hour-and-forty-minute race will take the green flag at 1:05 p.m. and is scheduled to be broadcast nine hours afterward on NBCSN from 10:00 p.m. to 1:00 a.m.

Tom Blomqvist, driver No. 25 BMW M8 GTE (P4): “I am disappointed with myself for losing three positions at the start. Ultimately, we had to make some strategy changes to try to make it up, but unfortunately the podium was just out of reach.”

Connor DePhillippi, driver No. 25 BMW M8 GTE (P4): “We expected more from ourselves today than fourth, but we lost some performance compared with yesterday. It’s great that the team is back on the podium. Hopefully, that will give us some momentum heading to the next rounds of the championship.”

John Edwards, driver No. 24 BMW M8 GTE (P2): “It is great to be back on the podium, but the result is bittersweet as we had the car to beat for quite a bit of the race.”

Jesse Krohn, driver No. 24 BMW M8 GTE (P2): “A driver always expects a win after starting on the pole, but today just was not our day. We had all the ingredients, but could not get the mix right.” 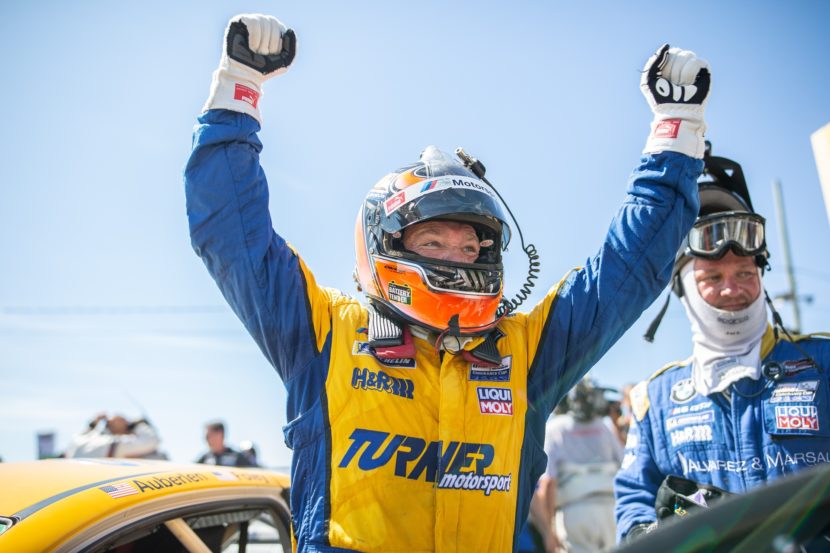 With the momentum of the team’s second place finish last Sunday at Watkins Glen International, Turner Motorsport scored its first victory of the season with Bill Auberlen and Robby Foley driving the No. 96 BMW M6 GT3 to the win from the pole. The victory was Auberlen’s 59th career North American sports car racing victory moving the BMW ace to within one win of a tie with Scott Pruett for the lead in all-time wins.

“We have worked very hard to turn our luck around,” said Will Turner, Team Principal. “Everything went our way today. Robby started the race from the pole and stayed in front. I am very happy that Robby has found a home here. At the end we all got to watch how hard it can be to beat Bill Auberlen in a BMW.”

Bill Auberlen, driver No. 96 BMW M6 GT3 (P1): “Robby did a flawless job from the pole to the end of his stint to hand me a winning car. It was not easy, but we got the win. This is my first time back on the top step of the podium since my mother passed last year and I want to dedicate this victory to her.”

Robby Foley, driver No. 96 BMW M6 GT3 (P1): “The race got really exciting at the end, but we got it done. My stint stayed right on course. The Acura got close a few times, but I stayed in front. A great day for the team.”

Round 6 of the 2019 IMSA MICHELIN Pilot Challenge, the Lime Rock Park 120, will take place on Saturday July 20th at Lime Rock Park, in Lakeville, Conn.