BMW M1 Story Gets Immortalized in “Blue One” Art Installation 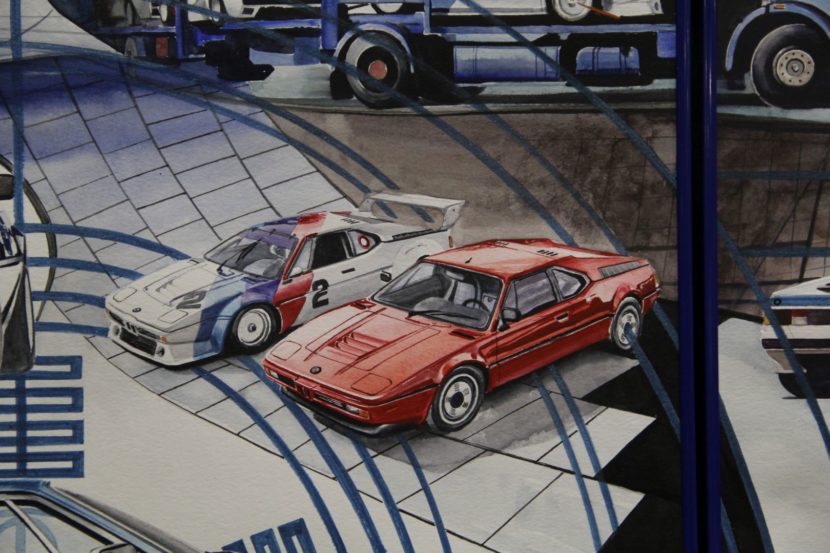 The BMW M1 was and still is the only supercar the Bavarian brand ever made. The creation of the car was only possible in collaboration with Lamborghini and even then, things were extremely close to not coming to fruition. This year, the iconic model turns 40 and in order to honor that rounded figure, the people over at the BMW Car Club of America decided to give it its own art installation. And who better to do it than Romanian painter, Adrian Mitu, an artist who transformed into pure art so much of BMW’s history.

You might remember him from his two previous projects, that got his foot in through the door. To mark the 100th anniversary of the BMW brand he joined forces with BMW Romania and created “Blue Coffee”, a 30-day painting marathon during which he painted 100 watercolors, honoring 100 iconic moments in the history of the brand. Coffee was actually used for coloring, the name of the installation being inspired by this trick used by Adrian.

That project was followed in early 2018 by another art installation dubbed “Blue Hero”, dedicated to the life and career of Jochen Neerpasch, the creator of BMW Motorsport and several defining projects for BMW, including BMW Art Cars, BMW M cars, and, of course the BMW M1.

And so we get to his latest project, “Blue One.” This time, he created an artwork comprised of 25 massive paintings that work as a storyboard, with heroes, milestone and legendary moments throughout the car’s history combined in an elegant composition. 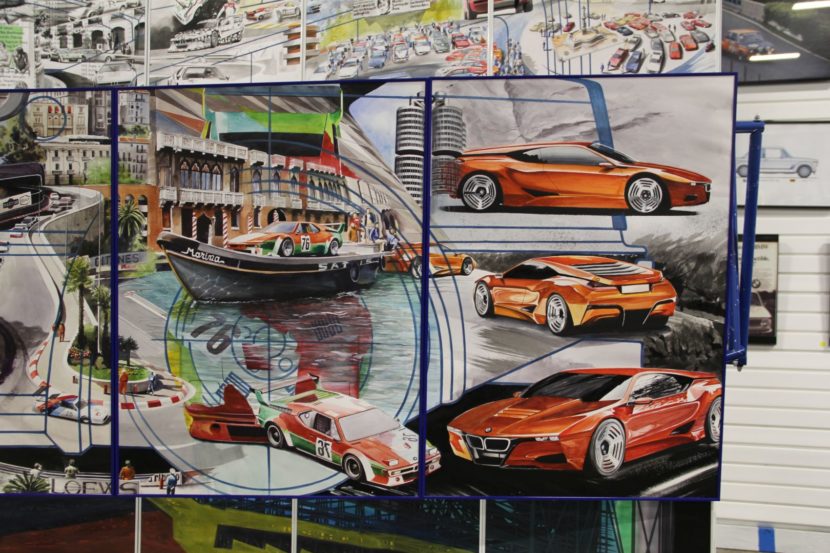 18 paintings are merged in a curved background wall, while seven paintings positioned in front are combined in a straight surface. The background composition integrates the BMW M1 outlines as seen from above, while the front structure presents the side silhouette of the car, both in a 1:1 scale. The background wall tells the story of how the BMW M1 was created, while the front wall shows iconic moments and images of the car. The project follows several BMW motorsport defining figures, such as: Jochen Neerpasch, Martin Braungart, Paul Rosche, Alexander von Falkenhausen, Paul Bracq, Giorgetto Giugiaro, Hans-Joachim Stuck, Marc Surer, Niki Lauda, Mario Andretti and Clay Regazzoni. 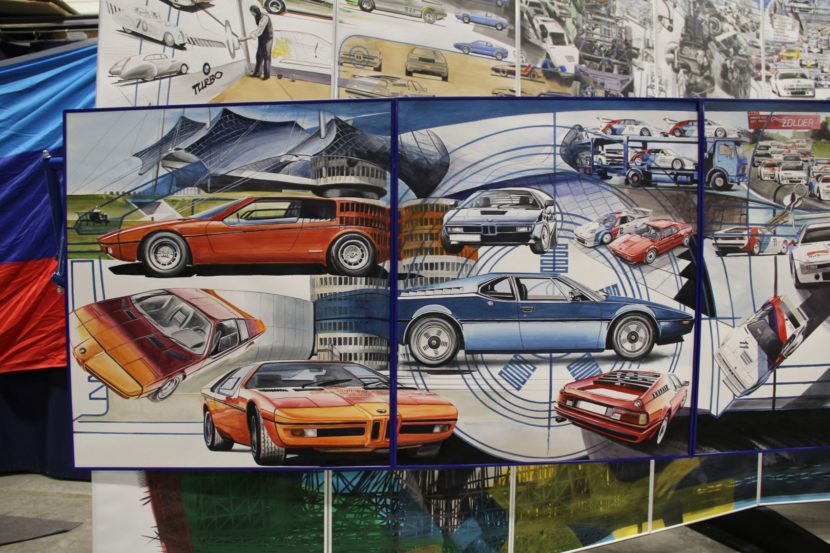 In total, there are 26 parts, 25 painted blocks and an elegant binding structure as a reference to the BMW M1 model code – BMW E26. The structure created to integrate the two walls was specially developed for this project by the Romanian architect Adrian Enache. The Hilton Head Concours celebrated the 40th Anniversary of the BMW M1 during a 3 day event.

“We are proud to be able to present this amazing artwork celebrating the M1,” says Dirk de Groen, President of the BMW Classic Car Club of America.

“The artwork served as the backdrop to the M1 display at the Hanger Party on Friday and was presented on the Concours lawn on Saturday and Sunday.  Visitors are able to enjoy a unique collection of street and race M1s while visualizing the development of this rare BMW”.

After the Hilton Head Concours, the Blue One Project will be displayed at the BMW CCA Foundation Museum in Greer, SC before returning for a European tour in the Spring of 2019.

“It will be exciting to experience the Blue Coffee, Blue Hero and the Blue One Projects together in a single venue,” says Adrian. “I am proud of the support that we have received from the Foundation Museum and look forward to thousands of people being exposed to the history of BMW as told through creative artwork.”