Marco Wittmann wins the DTM finale at Hockenheim for BMW 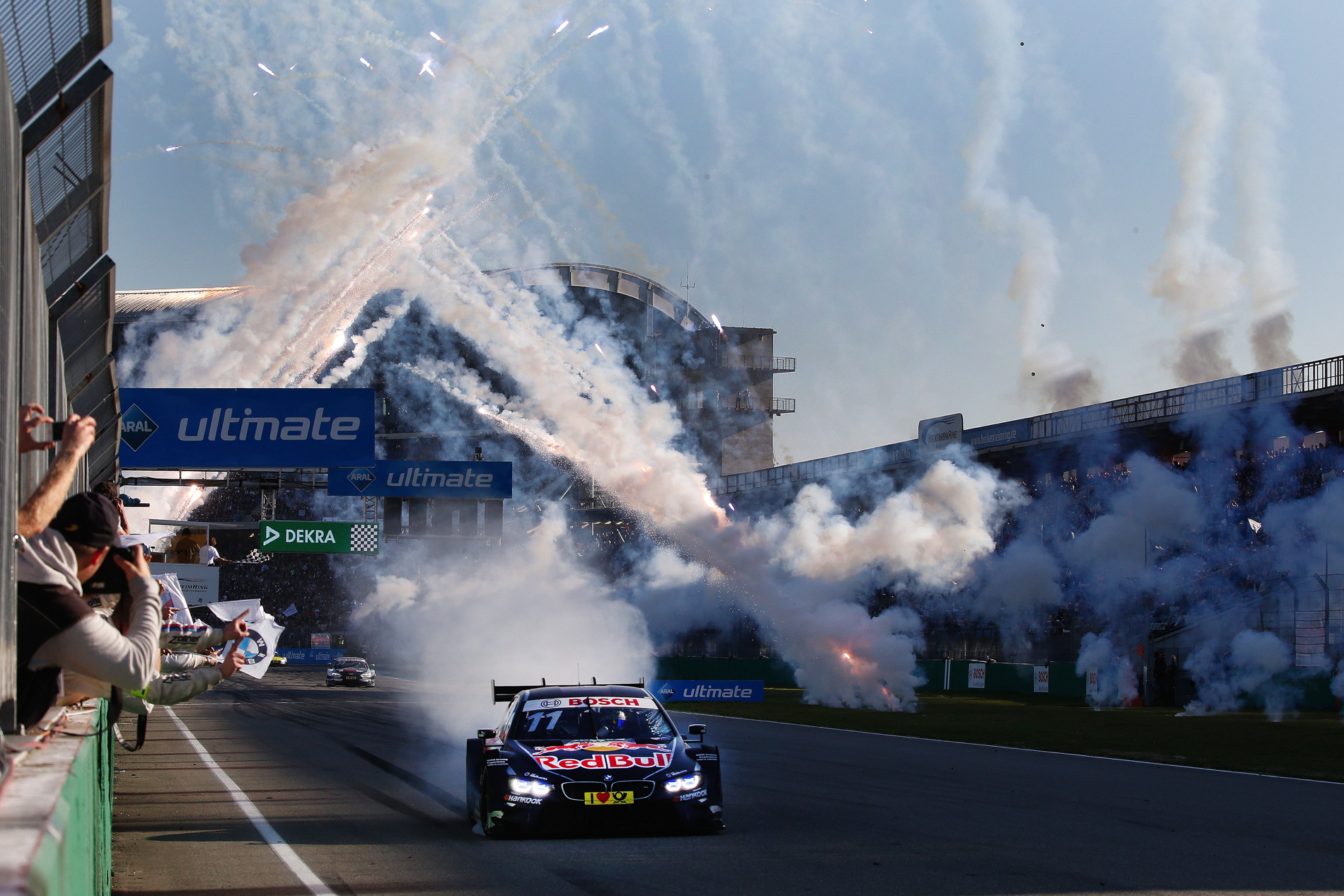 Marco Wittmann (GER) produced an impressive display in his last race as DTM champion – for now – to claim his first win of the season and ensure that BMW ended the season on a high. He finished ahead of René Rast (GER) at the Hockenheim (GER) finale. Second place was sufficient for the Audi driver to win the title. Wittmann now has nine DTM victories to his name. He ended the 2017 season as the best-placed BMW driver in the Drivers’ Championship, finishing in fifth place with 160 points. In the Team Championship, BMW Team RBM was the top-placed BMW team in fourth. BMW ended the year third in the Manufacturers’ Championship. 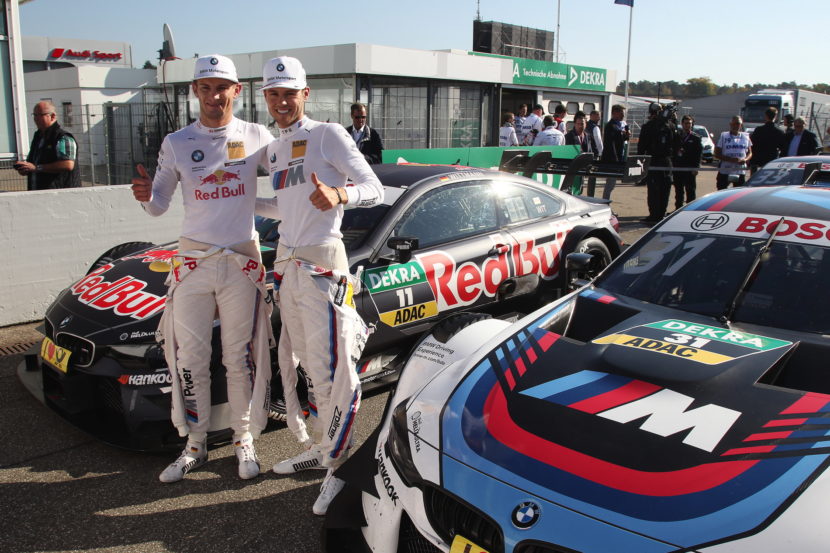 Behind Wittmann, Maxime Martin (BEL) and Augusto Farfus (BRA), in sixth and seventh place, also picked up points in Sunday’s race at Hockenheim. Tom Blomqvist (GBR) started from pole position, but failed to finish after being hit from behind by another car. Timo Glock (GER) and Bruno Spengler (CAN) finished 12th and 14th. In total, 152,000 spectators followed the final weekend of the 2017 DTM season at the Hockenheimring.

Marco Wittmann (Red Bull BMW M4 DTM) and Tom Blomqvist (BMW Driving Experience M4 DTM) were embroiled in a close battle for pole position throughout the 20-minute session, which was interrupted halfway through due to track damage. In the end, it was Blomqvist who secured the third pole of his career with a fastest time of 1:30.491 minutes, for which he scored three points towards the Drivers’ Championship. Wittmann ended the final qualifying session of the season in third place, picking up one point for his efforts. Maxime Martin (SAMSUNG BMW M4 DTM) and Augusto Farfus (Shell BMW M4 DTM) also made it into the top-ten in seventh and ninth places. Timo Glock (DEUTSCHE POST BMW M4 DTM) and Bruno Spengler (BMW Bank M4 DTM) were 12th and 14thfastest. Penalties awarded to other cars saw Martin promoted one place, while Farfus, Glock and Spengler moved up two places on the grid. 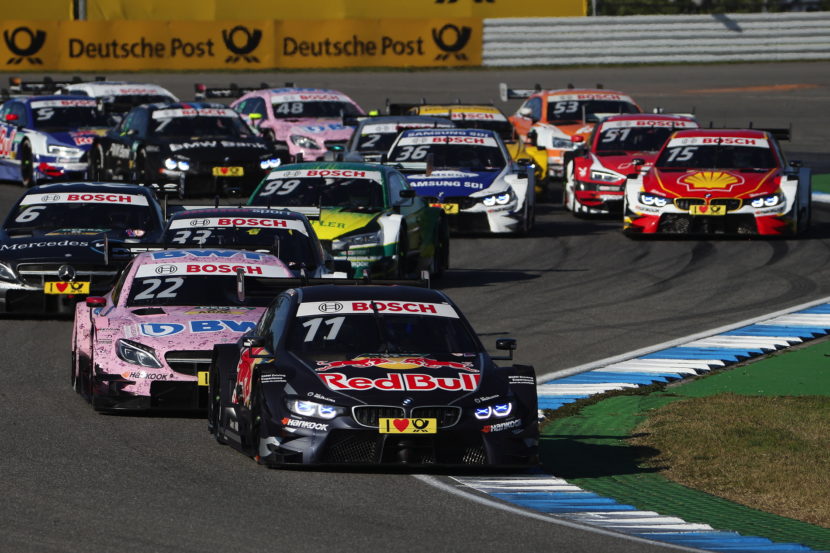 Tom Blomqvist and Marco Wittmann got away well at the start and were running first and second after the opening lap. A further three BMW drivers were in the top ten for the first half of the race, namely Maxime Martin, Augusto Farfus and Timo Glock. An earlier pit stop saw Wittmann leapfrog Blomqvist and take over as the leading BMW driver. With the Drivers’ title at stake, René Rast (GER, Audi) was showing good pace. He passed Blomqvist after his pit stop, while Wittmann pulled clear at the front of the field. A few laps later, Blomqvist was hit from behind by Robert Wickens (CAN, Mercedes) and forced to retire shortly after. Wittmann comfortably defended his lead to claim his first victory of the season in his last race, for now, as DTM champion. Rast was runner-up and crowned the new champion. Maxime Martin and Augusto Farfus came home sixth and seventh to pick up more points at the end of the season. Timo Glock and Bruno Spengler were 12thand 14th. 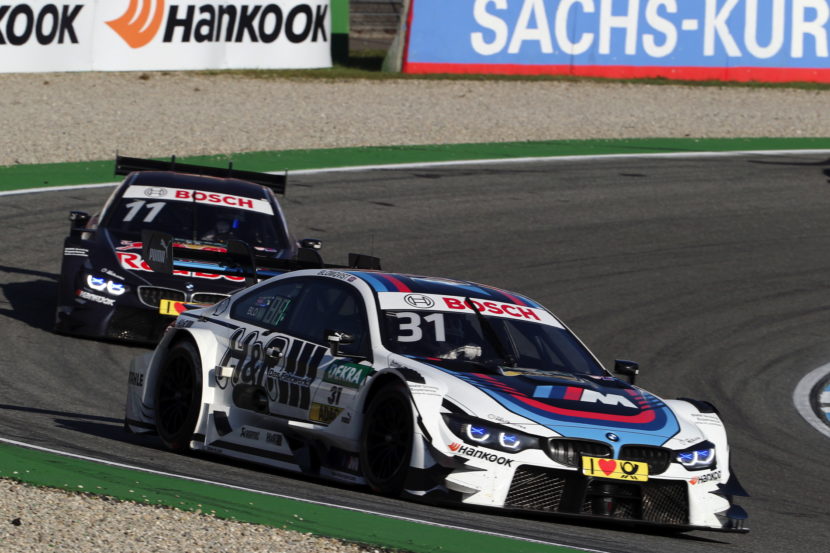 BMW Motorsport Director Jens Marquardt: “The 2017 DTM season finished with an exciting final weekend. 152,000 spectators created a fantastic atmosphere – and witnessed two good, fair races. Timo Glock made it onto the podium for us on Saturday. Marco Wittmann’s victory then brought the season to a perfect close for us. We once again had three drivers in the points in the final race, and we have now had four wins this season. Although this is the first time since our DTM comeback in 2012 that we have come away without a title, I would like to say a big thank you to the whole team. It has been a hard year, but everybody gave it their all, right down to the final lap. Congratulations to René Rast and Audi on their titles. René got the better of the more established drivers in his rookie year. All in all, the DTM event here at Hockenheim has once again shown what makes this series so special: close battles, fantastic drivers, and passionate fans. Congratulations to Gerhard Berger and everyone involved. Race weekends like these are the reason we will offer the ITR our full support as it works to shape the future of this race series over the coming weeks and months.” 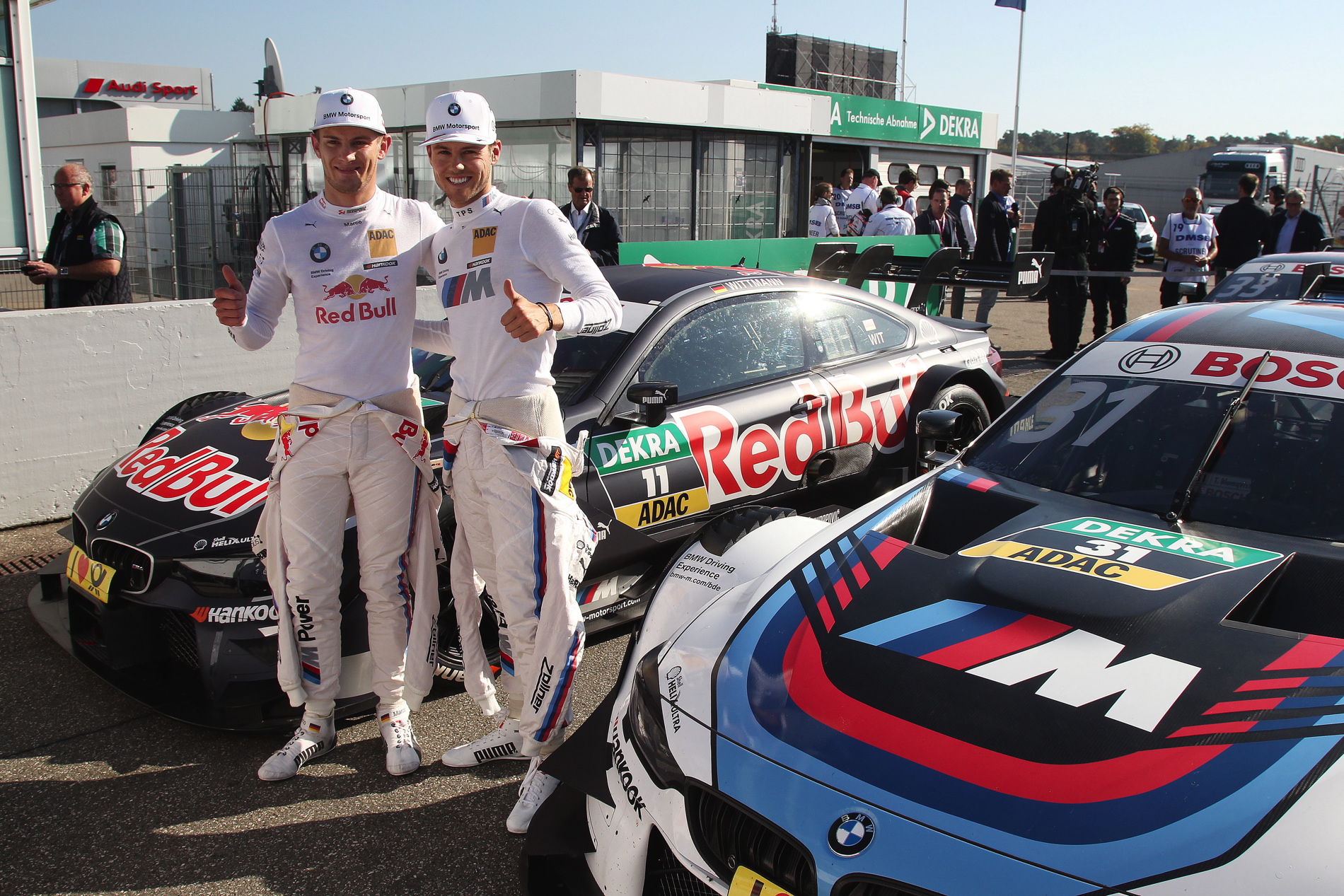 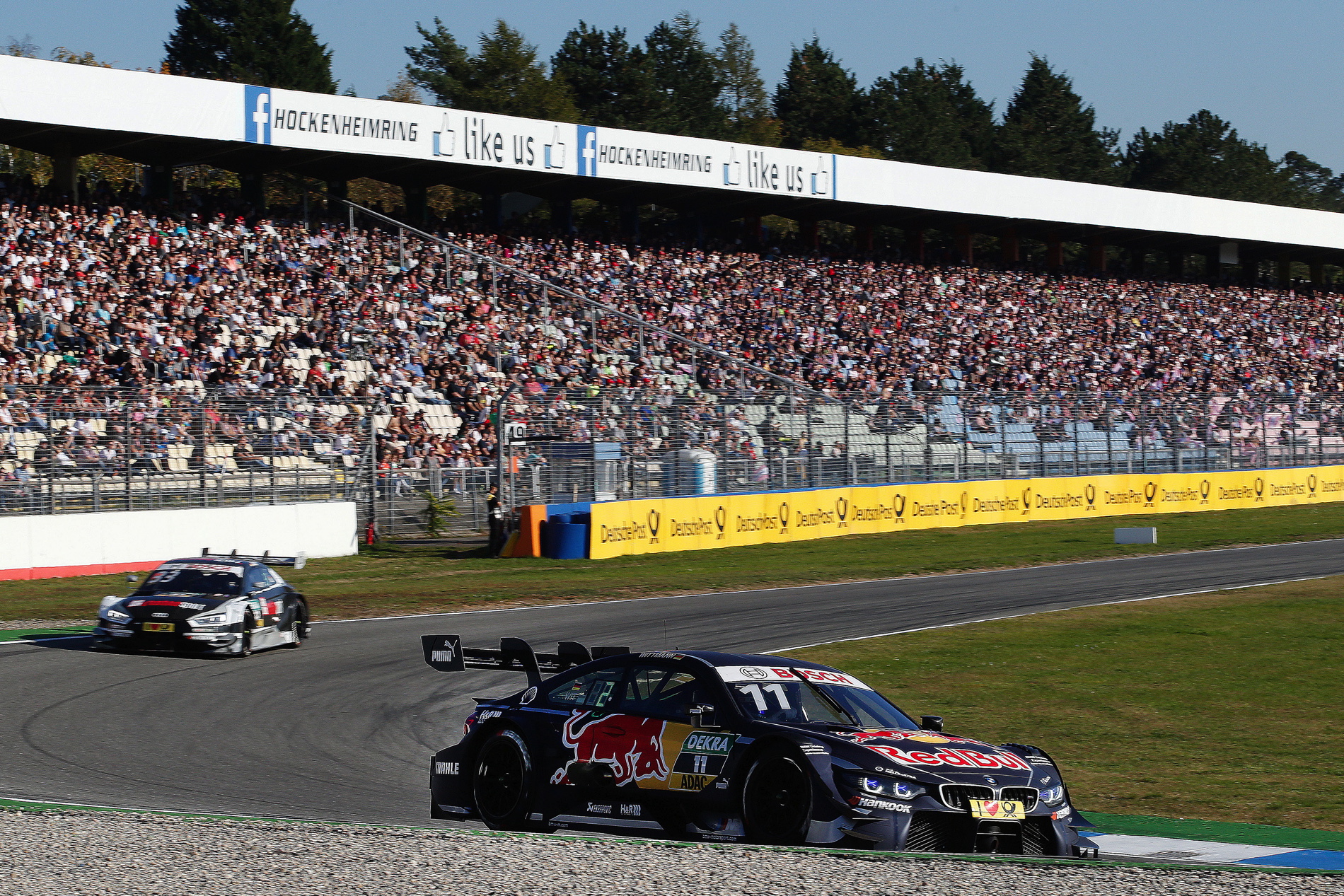 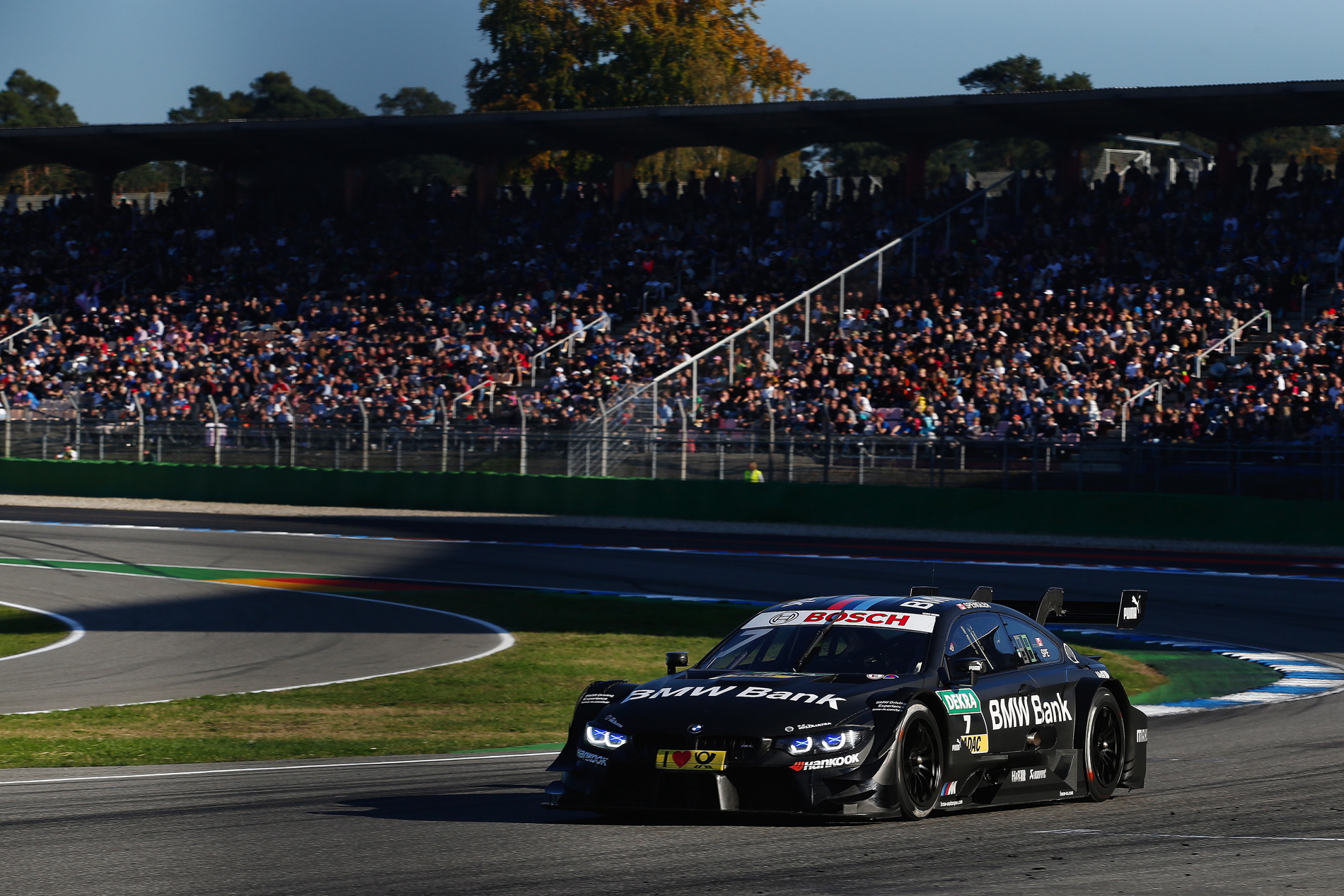 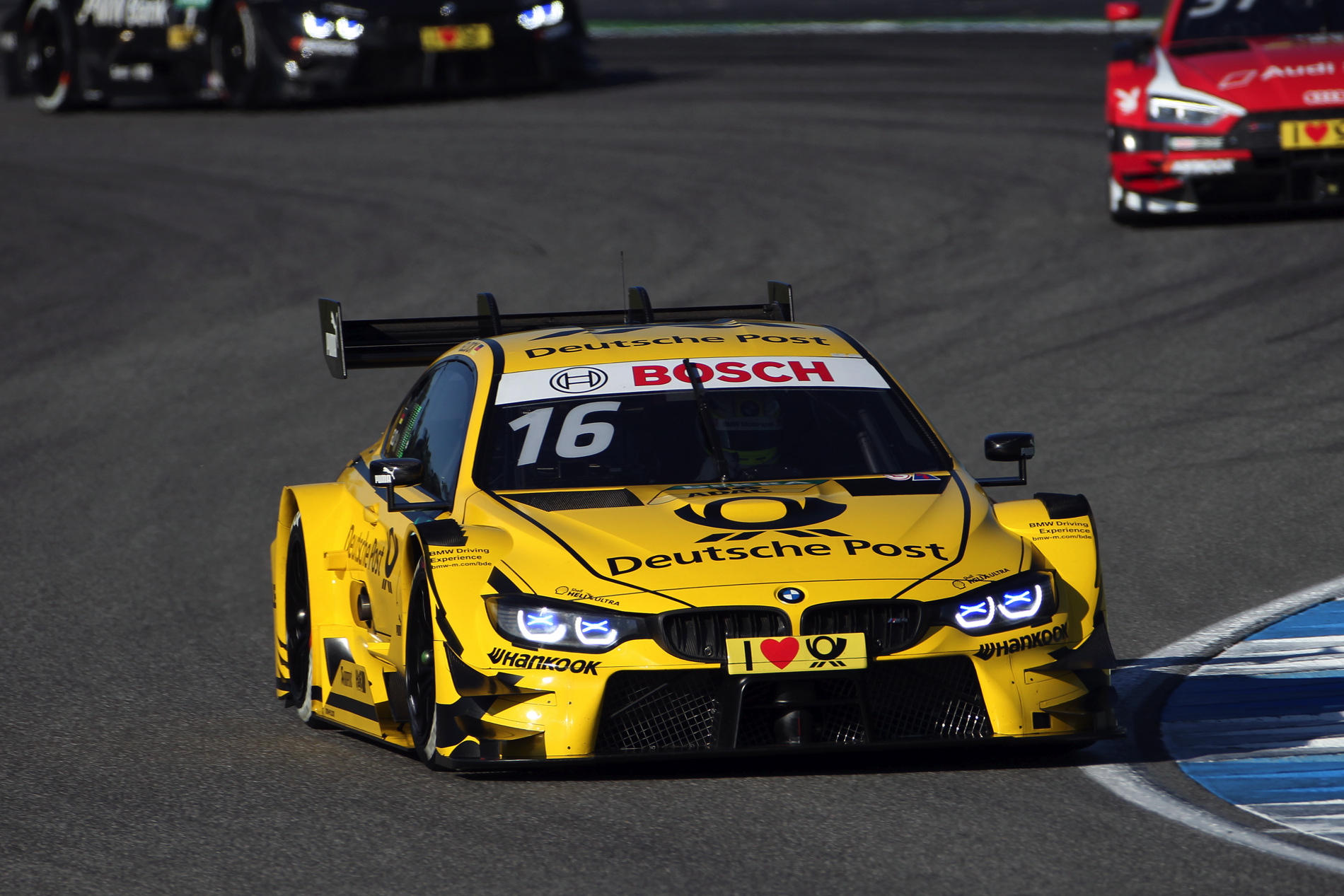 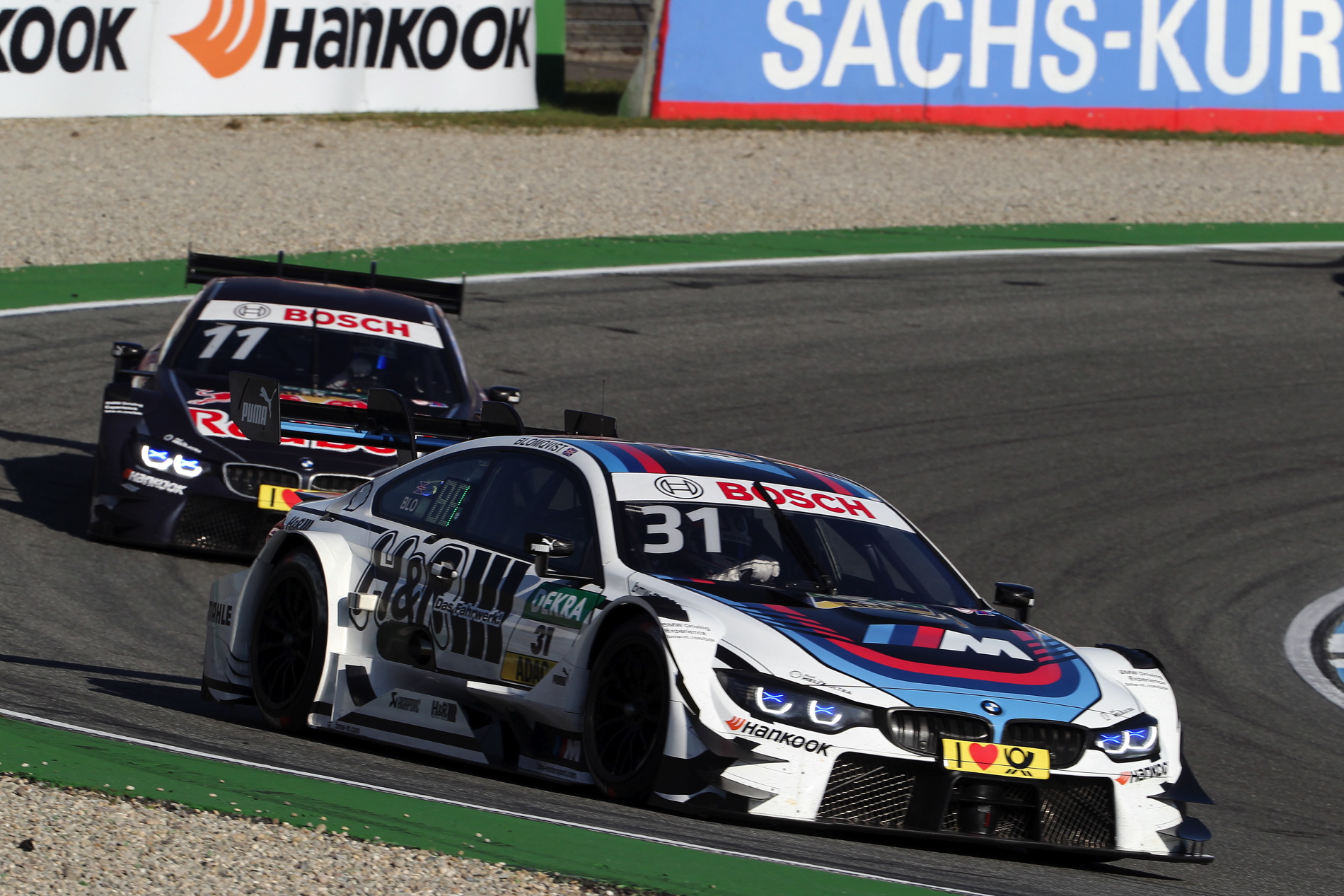 Stefan Reinhold (Team Principal, BMW Team RMG): “That was an eventful end to an eventful season. Firstly, congratulations to René Rast. We have known each other for a long time, so I am very pleased for him, and of course congratulations to Arno Zensen and his team too. I would like to say a big thank you to our team and BMW. We struggled with a few issues this weekend, but to see Marco on the top step of the podium again in the very last race of the year is just fantastic. We are already looking forward to next season.”

Marco Wittmann (#11, Red Bull BMW M4 DTM – Qualifying result: 3rd place, race result: 1st place – 74 races, 9 wins, 20 podiums, 9 pole positions, 683 points, 2 drivers’ titles): “I am really happy. Every driver wants to end the season with a win. It is a great way to go into the winter break. I have been hungry for my first win of the season ever since my victory at Zandvoort was disallowed. It feels fantastic to get it now. My team did a magnificent job. We made a few changes to the car after Saturday, and it really worked well. Thank you to the entire RMG crew, and congratulations to the new champion René Rast.”

Augusto Farfus (#15, Shell BMW M4 DTM – Qualifying result: 9th place, race result: 7th place – 84 races, 4 wins, 12 podiums, 6 pole positions, 380 points): “I think we performed well. There was not much more in it for us. It feels good to have picked up a few more points in the final race of the season. I am now looking forward to the winter break, then we can go on the attack again next year.”

Timo Glock (#16, DEUTSCHE POST BMW M4 DTM – Qualifying result: 12thplace, race result: 12th place – 74 races, 4 wins, 9 podiums, 4 pole positions, 346 points): “The whole day was unfortunately not exactly ideal. As on many other race Sundays this year, it did not really come together for us. We had to replace a damaged gearbox which meant that the suspension points were not right. Also, we did not have enough time left to change the anti-roll bar. As such, the car was not as good as yesterday and we were fighting a bit of a losing battle today. I think Marco’s victory is a nice end to the season for BMW. Respect to René Rast and congratulations on his title win. He fought hard for that in his first year. I take my hat off to him.”

Bart Mampaey (Team Principal, BMW Team RBM): “We had a very good qualifying and then led the race for the first few laps with Tom Blomqvist. It is obviously very disappointing that he was then taken out by Robert Wickens in a very dubious manoeuvre for which he was later penalised. Maxime made up a few positions, thanks to a good strategy and a quick pit stop. As the season draws to a close, I would like to thank BMW and my team. We always gave it our very best and, in my opinion, did as well as possible.”

Bruno Spengler (#7, BMW Bank BMW M4 DTM – Qualifying result: 14thplace, race result: 14th place – 157 races, 15 wins, 48 podiums, 18 pole positions, 833 points, 1 drivers’ title): “Congratulations to Marco on his win today and, of course, to René on the title. Personally, I am obviously not happy with my race today. I don’t think we were right to stop just three laps before the end of the race. That’s the way it goes sometimes.”

Tom Blomqvist (#31, BMW Driving Experience M4 DTM – Qualifying result: 1st place, race result: DNF – 54 races, 1 win, 5 podiums, 3 pole positions, 197 points): “My start was good, and I led up until the pit stop. That did not go well, and I lost ground as a result and dropped back two positions behind Marco and René. After that, I no longer had the same pace and had a few issues with the balance of the car. Robert Wickens then took me out of the race. All in all, it was very disappointing for me and, to a certain degree, reflects my entire season.”

Maxime Martin (#36, SAMSUNG BMW M4 DTM – Qualifying result: 7th place, race result: 6th place – 64 races, 3 wins, 10 podiums, 3 pole positions, 363 points): “It was a difficult race. We were not able to match the other cars’ pace so well in the second half. Despite that, it has been another good season for me. We have had a few highs and lows, but on the whole we were roughly as consistent as in previous years. Congratulations to Marco on his win today. And, of course, congratulations to Audi and René Rast on their titles.”