Sometimes life rains happy little flowers. Take the other day, for example. There I was, having an otherwise normal day working out of my firm’s office in lovely Columbus, Ohio, and suddenly I wasn’t. Alien abduction can be the only explanation because there can’t be any logical reason I suddenly found myself in the race shop of Rahal Letterman Lanigan Racing in Hilliard, Ohio, standing next to one of the most iconic race cars of all time: The BMW-powered McLaren F1 GTR.

In the pantheon of sports cars, the Gordon Murray-designed McLaren F1 sits at the highest step of any possible pedestal; it’s so iconic, it’s virtually mythic. And the race car that was born from the road car project (and begrudgingly by Murray at that) still exists as some sort of almost unbelievable footnote, a seemingly effortless tilting of the race world’s axis that hasn’t really been replicated since.  It was a car so extraordinary that it won the overall victory at Le Mans on its first try, when it did so in 1995.

The BMW S70/2 V12 engine was the beating heart of the F1 GTR and was used by BMW in the F1, the V12 LM and LMR Le Mans prototypes (and rather humorously in the one-off X5 Le Mans built to celebrate BMW’s overall victory at Le Sarth in 2000).  The 6-liter motor made 618-hp and 480 lb-ft of torque and redlined at 7500rpm.  Ironically, Le Mans GT1 class rules limited the amount of horsepower the race motors could make, so courtesy of an air restrictor, the F1 GTR’s engine actually made slightly less power (closer to 600-hp) than the road car.  This slight limitation was more than compensated by the dramatically more aggressive aero package and lower overall weight on the race car, as evidenced by it achieving 236.7 mph on the Mulsanne Straight when it arrived at Le Mans in 1995.

This particular car, chassis #17R, was campaigned at Le Mans in 1996 by BMW Motorsports (in conjunction with their Italian partner, Bigazzi Team SRL) and finished 8th overall (and 6th in the GT1 class). Nelson Piquet, Johnny Cecotto, and Danny Sullivan shared driving duties. It’s now part of BMW North America’s BMW Classics collection and is maintained in pristine running condition by the mechanical wizards of BMW Team RLLR. And it’s most assuredly no museum queen; it last bared its teeth at this year’s Rolex Monterey Motorsports Reunion at Laguna Seca under the hot shoe of BMW factory driver Bill Auberlen.  (To get an idea of what this beast sounds like from the cockpit, check out this clip on Axis of Oversteer.)

The F1 GTR shares the iconic scissor doors and majority of internal mechanicals with the road car but in race car trim is about as raw and purposeful as you’d imagine. The F1 GTR also shares the road car’s central seating position, with two vestigial jump seats positioned on either side and slightly rearward. Getting in through the lattice of roll cage and into the central seat takes more than a few acrobatics, but once I pretzeled thusly, the fit of the cockpit and vista over the car’s snout feels perfect; the physical presence of the giant BMW V12 behind my head is palpable, and the aluminum shifter is perfectly at hand. Come on guys, let me fire this monster up! I think I may have blinded someone with my grin. And since a sister car, chassis #21, sold at a Gooding & Co. auction in 2014 for $5.28MM, I was really glad I didn’t ding it getting in or out. 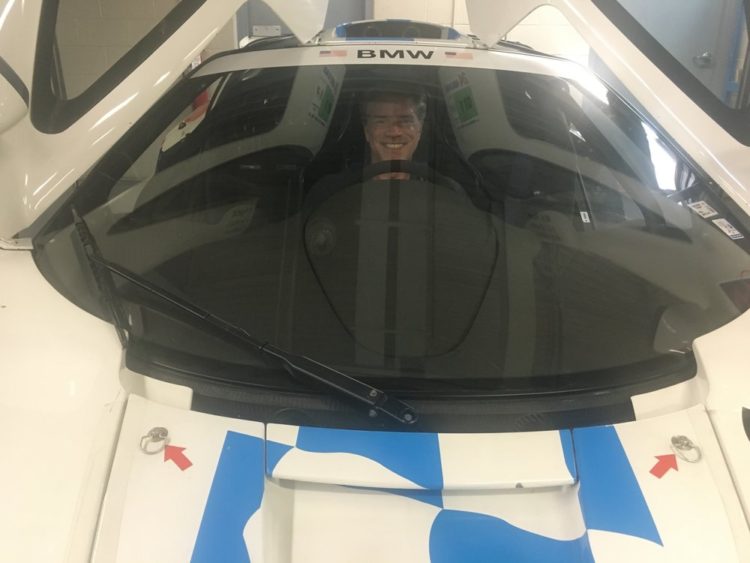 As all wonderful things must be, my time in the car was all too short (though I think I was a bit more graceful folding myself out). But what an amazing experience with an absolutely astounding piece of automotive and racing history. One I’ll never forget.

(Extra special thanks to Steve Dickson and Brian Marks from RLLR for making the alien abduction possible.)