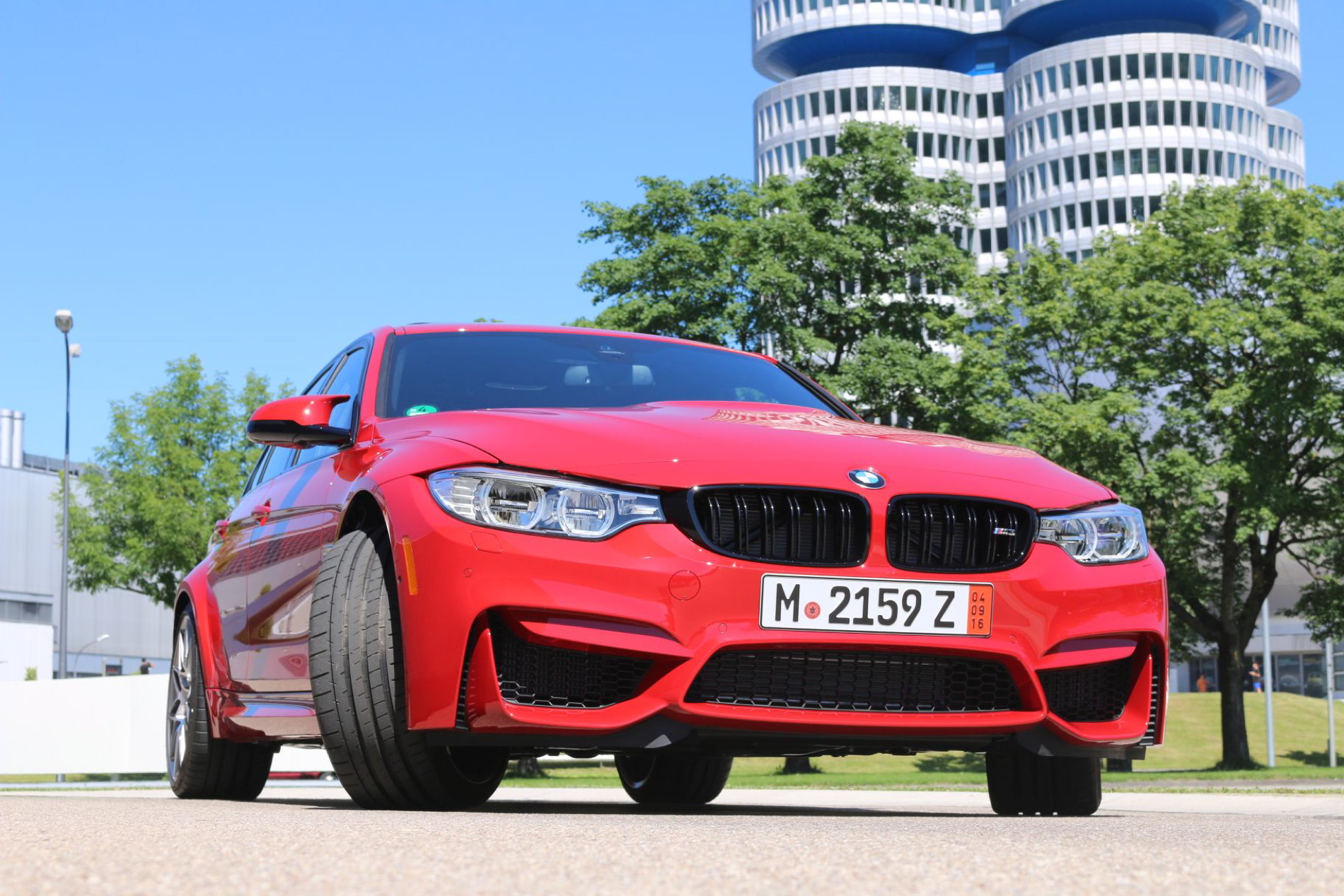 Comparing when it really counts – on the Nurburgring – By Dan Irish with Alexei Griesbach. Being that I like European Delivery from BMW so much, it was not a hard choice to order the 2016 M3 with the Competition Package (Equipment code “ZCP”) in January 2016 even though I had the 2015 M3 in the garage (see my previous article from last year BMW European Delivery: The 2015 Melbourne Red M3 and Surviving the Nurburgring). So with the press release hot off the wire, the order was placed and a delivery date of June 2016 secured. This would be the final month of delivery for the MY 2016, as the production line switches to MY2017 in July. This is my 8th European delivery since 2004.

While the BMW M3 definitely is not a car lacking power, the Competition Package adds in additional horsepower for the final burst of top end speed to 165 MPH. But when can you go 165 MPH in North America?

The 3.0 liter twin turbo six cylinder doesn’t spit fire like the previous generation of the E90 V8, it does deliver torque and acceleration in droves. Whether it’s too abrupt or not is really a testament to your driving skill, when comparable to the more predictability of the Mercedes AMG class.  When comparing the 2015 M3 to the 2016 M3 with the Competition Package, it’s clear that the acceleration is very similar, but getting to top speed is definitely smoother, more fun and faster.

By recalibrating the rear suspension, differential and stability control software, a driver of the 2015 M3 can easily transition to the Competition Package and not end up in the railing. The Competition package takes advantage of the strengths offered by an additional year of refinement and balancing. The 5th generation model M3 is just as crazy fun as the original E30 or E36 models, but it is an even more fun type of crazy.

The best improvement in the MY2015 vs MY2016 Competition Package is the smoothness of the way that the max torque can deliver the acceleration that has made the BMW famous. With max torque between 1850 rpm and 5500 rpm, there’s quite the range. But with the improved software settings (meaning that the choices provided to the driver are more meaningful now), hardware and engine all work in a harmony that wasn’t fully realized in the regular M3.

The new engine pays even bigger dividends. Not only does it place less weight over the front wheels, but it also reduces the polar moment of inertia, which is simply a measure of how enthusiastically – or reluctantly – a car turns from its previously straight path. Too much weight at either end slows things down; amass more of the weight in the middle or, better yet, reduce it overall and the car has a lower polar moment of inertia. To the driver behind the wheel, this creates more of that enthusiasm for deviating from the straight and narrow.

These improvements reduce the 0-100km/h time of just under 4.0 seconds when acceleration is applied through the wheels with the magic of the seven-speed dual-clutch transmission. You’re pressed back into your seat in all cases beyond 75% throttle. Which brings me to the next point is that the Competition Package seats are way more comfortable than the standard M3 seats. A huge improvement, one that was relatively unexpected, but having driven 3,000km in the 2015 M3, it was clear to me this evolution was in the right direction.

Where does it really shine?

Where the Munich Monster really shines is on the track. This red monster made itself at home at the Nordschleife also known as the “Green Hell” where you can truly unleash the ultimate driving machine. With a push of the “M” button, the F80 evolves into an entirely different beast – the suspension stiffens up, steering wheel becomes tighter, throttle response is more sensitive, and the HUD turns into a tachometer resembling that of a Formula 1 car.  The straight-six, bi-turbo engine shrieks through the quad exhaust tips when opening up the throttle and gurgles as you ease off the gas (assuming you’ve put the vehicle into ‘valves open mode’ by selecting M2 with max engine performance). All of this is an indication that the F80 Competition Package was designed with one thing in mind – to slay the Nurburgring.

Navigating the Nordschleife (North loop circuit) was much more technical and required marginal room for error compared to the Grand Prix F1 Circuit. When comparing the performance of the original F80 M3 to the Competition Package, what really stood out as a big difference is the performance on the Nordschleife compared to the Grand Prix F1 circuit. The F1 track is relatively flat, wide and with tons of open space, few elevation changes and some long wide straights for top speed. The Competition Package outshined its original brother most notably in the very technical, elevation-laden, tight cornering Nordschleife. For someone who is a first-timer on both tracks, it is highly recommended to take a few laps around with an experienced instructor before taking the reigns. Also spending hours on a racing simulator such as Forza Motorsports and Gran Turismo will help familiarize the layout of the track. For Alexei, he was a Nordschleife virgin, while for me it was my 10th time on the track.

Not much track preparation was necessary to maximize the pleasure and performance of driving the Munich Monster. The onboard computer monitored all of the vitals of the car such as the tire pressure and temperature (reaching 70C) and even displayed a torque and horsepower gauge (usually maxed out or near minimum) as well as the amount of G-forces being pulled (.98Gs). If you’re feeling lucky, then flip the stability control off and watch your world view change as the tires get loose. Coefficient of sliding friction being generally less than that of static friction for any given Michelin rubber.

The 285mm wide rear Michelin tires held up very well after completing more than 20 laps on the 13km Nordschleife, but the front left showed the most wear. The car resists any sudden movements that may offset its balance, using the wider wheelbase, upgraded suspension and improved stability control to add on more lateral speed with more confidence. This was especially useful when cornering the banked and bumpy carousel corner.

The cross drilled rotor discs mean that hitting the brakes with enough force will respond with strong stopping power, and we didn’t notice any brake fade. The carbon ceramic brakes are a $8k extra so that is hard to justify unless you are living in a warm climate and tracking the car often. Straight-line braking before entering the laborious series of twists and turns was essential to balance the Competition’s power, speed, momentum and weight. Despite having the same essential parts as the 2015 M3, the rear differential feels more in tune with proportioned torque allocation to each rear wheel. In our case, we tried to drive the ‘line’ and with the goal of not engaging the traction control; this would mean we were on the fastest, straightest line and the Dynamic Stability Control (DSC) was not saving us at every turn. We were not that successful until about lap 19.

As unpredictable as the weather might be in Germany, luck was on our side since the weather was ideal for track conditions. It is best to avoid the track when it’s raining or your butt will be puckered as you think the next moment may be your last. Only once did it rain at the Nurburgring during our multiple days, but proving my skills and demonstrating how difficult it is to keep the M3 from going off course and into the guardrail was like I was using the Force (yes, that Force required of a Jedi master). Even with the stability control on, the rear wheel drive was very prone to getting squirrely on the sharp corners of the track. After completing a couple of laps at less than ideal speed, it was time to retire and rain check for another day.

Although the Competition Package was designed for this track, it clearly excels on the open road. Driving the Autobahn at 165 mph which is what the M3 ZCP is maxed to – feels no different than driving 65 mph. Having the suspension on Sport mode was about as comfortable as floating on water, but driving the cobblestone city streets of Europe was quite literally a pain in the ass. The cabin noise is also very prominent but the 16-speaker Harman Kardon sound system is superb enough to mask any background noise while blasting Above and Beyond.

At the end of the day, there is no question that the 2016 Competition Package M3 is the full embodiment of the evolution of the M3 spirit, and then some. Compromising ride comfort for sheer driving pleasure is worth dishing out the extra money if you spend as much time on the track as much as your daily commute.  This is what makes the Munich Monster the Ultimate Driving Machine.

PHOTOGRAPHERS AT THE NURBURGRING:

Many tourists to the Nurburgring aren’t aware of where you can get awesome photos of your experience. There are regular photographers that show up to the Nurburgring and stake out key photogenic spots depending on time of day, taking shots of the hottest cars in the crazy turns. We’ve included some of our favorites in the gallery below, including a few with the right proportions for iPhone wallpaper. Enjoy!

The photos in this article are purchased from:

Video was captured on a combination of Samsung 7 with a car mount and a GoPro, edited by Alexei Griesbach. Thanks to everyone who contributed to this article.