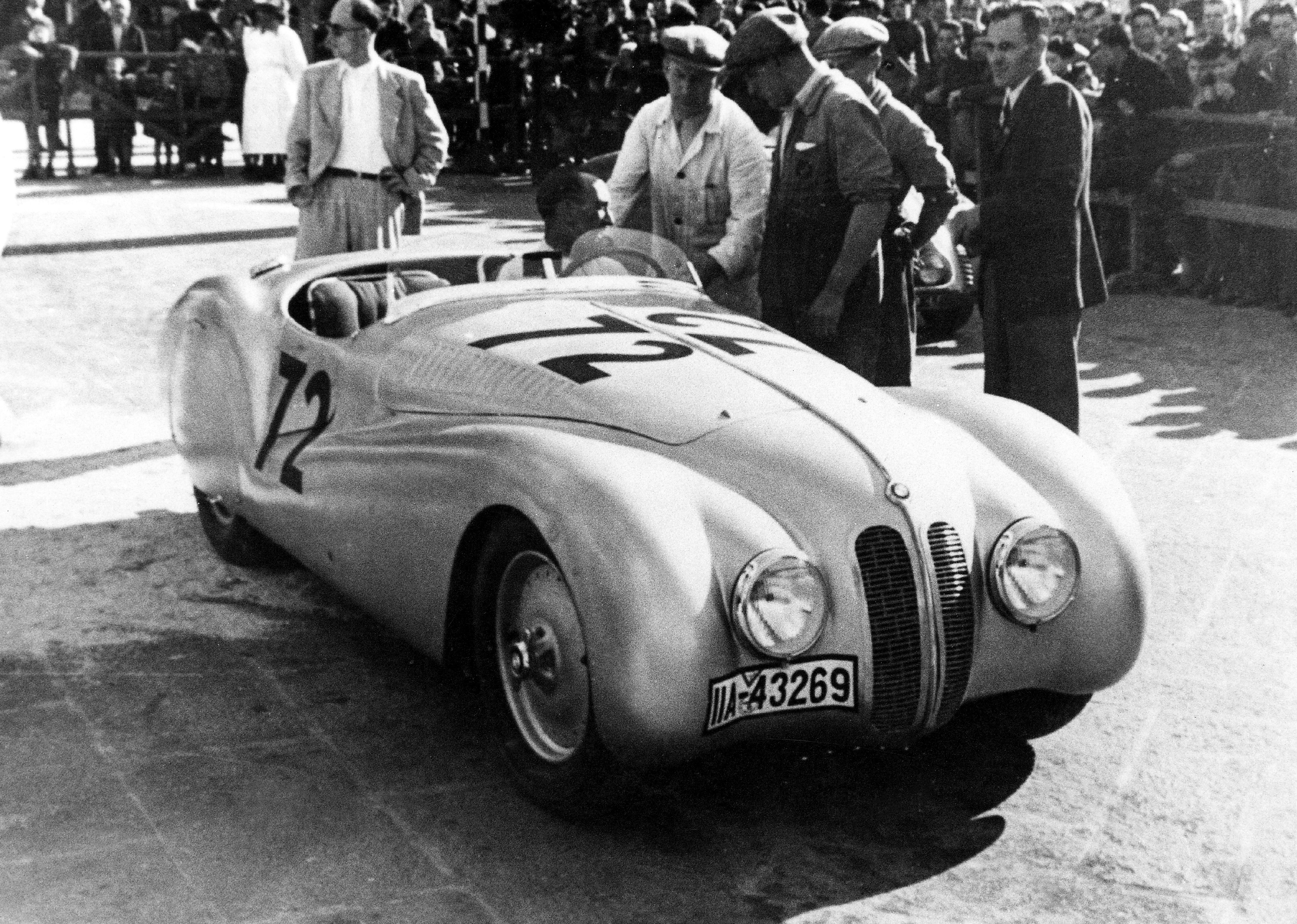 In 1932, BMW began developing its first proprietary inline six-cylinder engine, which was initially produced as a 40 horsepower, 1.5-litre unit in the company’s Type 34. Undergoing gradual enlargement over the next few years, the motor received its most important upgrade in 1936 with the application of a new hemispherical head with lateral inclined intake valves and crossover push-rods for the exhaust. These innovations easily lifted power to 80 horsepower, an engineering achievement for those times. Weighing in at just 780 kilograms, the 328 Roadster was considered one of the best racing cars one could buy.

Now displacing nearly two liters, the hemi-headed engine was dropped into a lightweight two-seat roadster built around a tube-frame chassis with an independent front wishbone suspension. The Roadster version, whose arrival was to revolutionize the sports car world over the subsequent two years, was unveiled almost as an after-thought, without drum roll or glitzy presentation.

Officially entering production in April 1936, the BMW 328 was extensively campaigned by the factory, with chassis number 85001 debuting to a 1st overall finish at the Eifelrennen Nürburgring while driven by Ernst Henne. In April 1937, the first customer cars were delivered, and both factory and privateer entries racked up wins by the end of the year, with additional checkered flags taken at the Eläintarhanajo in Finland, the GP des Frontières, the Bucharest Grand Prix, and the Eifelrennen Nürburgring again.

In 1938, the 328 really hit its stride, winning some 125 events, including 1-2-3 finishes at the Mille Miglia, International Avusrunnen, GP des Frontières, and two victories at the Nürburgring. These successes were followed by a three-car team entry at Le Mans in 1939 (which finished 5th, 7th, and 9th), and outright dominance at the shortened 1940 Mille Miglia, where team cars finished 1st and 3rd, and privateers finished 5th and 6th. By this time, the 328 could be tuned to reach 60 mph from a standstill in 8.8 seconds, and a top speed of over 110 mph. British BMW importer and privateer H.J. Aldington was once clocked hitting 117 mph at Brooklands.

This particular model with chassis number 85351 has been a regular participant at vintage events for several decades and in late 1980s was purchased by Ralph Day, the former owner of a BMW dealership in Concord, California.

In 1996, the 328 was purchased by the consignors, and the couple spent many hours over the following two decades participating in vintage tours and races, including several runnings of the California Mille and the Colorado Grand. The car competed in the Monterey Historics in 1999, 2000, 2005, 2011, and 2012; and ran in the Classic Sport Racing Group’s Thunderhill in 1999 and 2000; and at Concord Hill in 1999. It also appeared at the 2000 Sears Point Wine Classic, the 2007 Wine Country Classic, and the 2012 Sonoma Historic Motorsports Festival (the new event created by Monterey Historics founder Steve Earle).

Consistently enjoyed and maintained over the last 30 years, this BMW is documented with service and restoration invoices dating to 1998. It features a proper period BMW engine in 328 configuration, rebuilt by expert Shawn Thomas, complete with later updates for improved power and reliability. Notably, it has been equipped with a lovely Volvo synchromesh gearbox (though a period-correct BMW gearbox is included with the car). While the 328 is currently fitted with a driver’s-side racing windscreen, it is accompanied by the more traditional two-piece windshield, as well as a convertible soft-top, tonneau cover, and a pair of rear-wheel skirts.

Recently serviced by the respected Kevin Kay Restorations in Redding, California, this sensational 328 has spent the last three decades in the forgiving climate of California, consistently maintained as needed by two dedicated owners. It is ideally prepared for further tours or racing, and though not a show car by concours standards, would present proudly at any gathering of sports car enthusiasts.

[Note: Not the actual car sold at the auction]