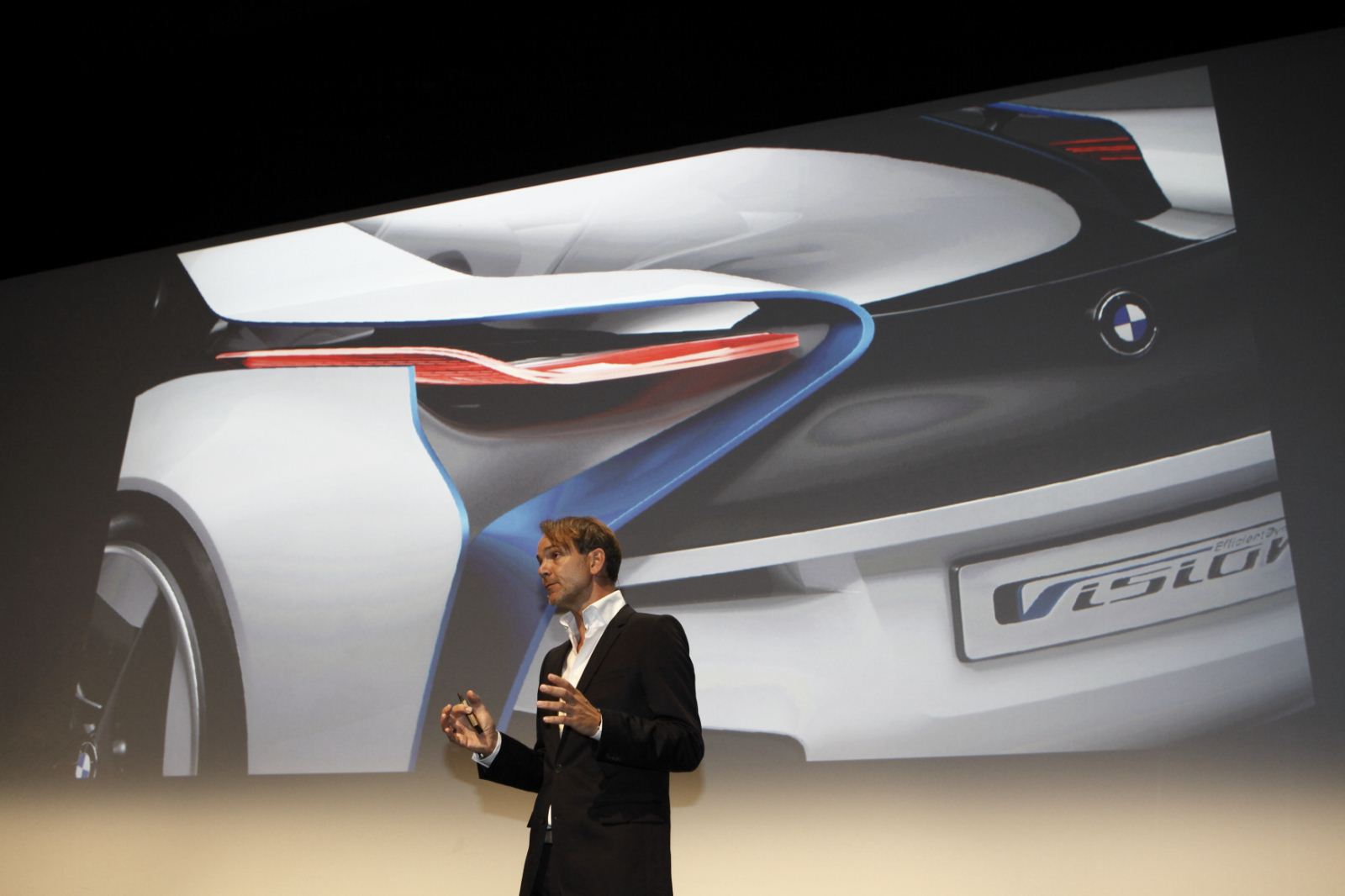 BMW Group Chief Designer – Adrian Van Hooydonk – spoke to German media on the future of automotive design and its interaction with digital technology. BMW has recently introduced the new 7 Series – which along with a refreshed design – also brings the latest and greatest tech inside the cabin. From Gesture Controls to Touchscreen and Connectivity, the 7 Series is a mobile office on four wheels which can offer a seamless digital experience to its occupants. The high-end luxury limousine was followed by the BMW i Vision Future Interaction showing what the user interface of the future might look like – including support from high-resolution vehicle displays where the content responds to the situation. In order to make the interaction of the passengers with the vehicle as intuitive as possible, all functions are controlled using touch-sensitive surfaces, gestures and voice.

“The auto industry is currently at a crossroads,” Van Hooydonk said. “Everything happened at the same time. On one hand there is this trend towards electric mobility, but there are also more gasoline – and people who want to have gasoline. There are new forms of digital interaction, but still a lot of customers who prefer to interact easily and analog with their car, some that prefer simple buttons and levers. And then there’s autonomous driving.”

Van Hooydonk says BMW will offer an option to everyone and customers will be able to choose between driving the car or at times simply handing over the helm to the computer while they participate in a video conference.

But how does digital influence design? Will the cars be like an egg-shaped car like Google’s own autonomous car?

“If I have my way, then you will be sitting in a very sexy BMW – or MINI or Rolls-Royce,” Van Hooydonk said. “And they will definitely not have an egg shape.”

When asked about BMW worries about an Apple car coming down the road, the BMW Group head of design confidently say that Apple is not the only one that knows how to engage with customers at a personal level – BMW knows how to achieve that as well.

“Apple has a very good design team,” the chief designer added. “I know Jonathan Ive personally and I respect him enormously. Of course, if they will build a car, you have to take this seriously. A car is such an important element in human life, that the design must be highly emotional. Super-clean, perfectly executed. And BMW has always known how to develop things that people respond on an emotional level – not to mention the outstanding functionality. Therefore, I see no reason now to be completely unsafe. We just have to make sure that we move forward also in design.”

Van Hooydonk once said that technology in the future will be less and less visible, where gesture controls and touchscreens are at the center of technology.

“If cars in the future – at least in certain phases – can drive highly autonomous, the interior of a car is much more important,” Van Hooydonk added. “People then have time to look around, to do other things and pay attention only to the traffic flow. In addition, the first contact with the car in the future with the car will still being outside the car, probably on an electronic device. The driving itself will only be one of many activities that can exert there. And since we want to offer our customers a wide variety of ways to interact with the car, the digital life will be no longer interrupted by motoring.”

When pressed on the issue of the potential Apple car and their knowledge in customer experience, Van Hooydonk said: “Sure. They [Apple] are well versed in the digital world. But they have a lot to learn in the car world. And the question is: Will the customers receive their whole life, all their experiences and services out of the hands of a group? I don’t think so. I think demanding customers want the best of all worlds. But they naturally expect that there will be no friction between the different products.”

When asked about self-driving cars and their philosophy which clashes with BMW’s famous slogan “The Ultimate Driving Machine, Van Hooydonk said that a fully automated car will not arrive earlier than five years and its experience on the road will be highly influenced by regulations.

“The industry is currently working intensively on the topic “autonomous driving”. And I think the first fully automated car will be not earlier than in five years on the streets. But how the regulation will develop, is really very difficult to say. Recently, in California rules hae been issued that narrows the limits of automated driving narrow. It stipulates that a driver – within a short time – must be able to take the helm again themselves.”

But that doesn’t translate into BMW putting the brakes on autonomous driving projects. Van Hooydonk says the company is very much so committed to innovate and master new technologies.

“I have been working for BMW for more than 20 years and with us big changes are on the way. We do not tend to bury our heads in the sand and hope that the storm is over us. We have showed this with electromobility during digitization. So I think we can say that we do not shy away from the new. We are working very hard. We want to master new technologies.”