The Design of the new MINI Clubman

Home » The Design of the new MINI Clubman

In 2007, MINI wrote a new chapter in the brand’s history when it extended the product family by a vehicle concept that was both innovative and stand-alone: the MINI Clubman. This MINI take on a “shooting brake” was a sports car that combined the style of a coupé with a hatchback for greater functionality – and proved a winning formula from the start.

In 2015, MINI took the Clubman’s success story further, transporting it – literally – into a new dimension. Commanding, elegant and noticeably matured, the third generation had clearly grown both inside and out while carving out a new vehicle class for MINI. “In a segment that places its focus primarily on function and usability, the new MINI Clubman offers unprecedented aesthetics brimming with serene elegance,” explains Anders Warming, Head of MINI Design. “Clever ideas, emotionally charged design and a high-end colour and material mix produce an overall experience previously unmatched in this vehicle class.” Even in the new premium-compact segment it is consciously designed as the “smallest large car”: true to the maxim of the classic Mini, it offers maximum interior space on a minimal footprint. 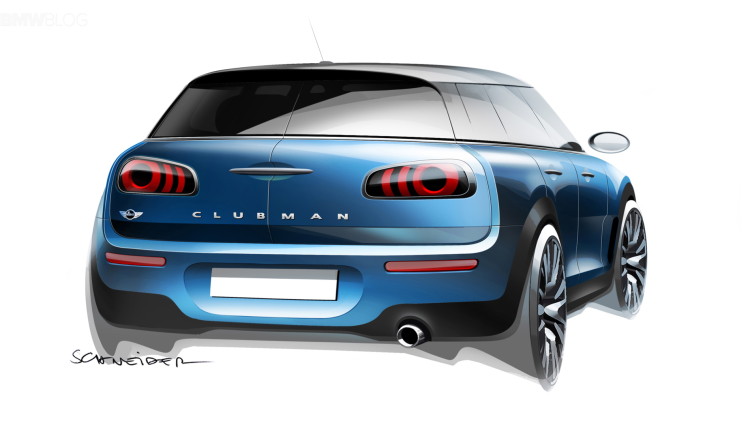 Just over 32 cm longer and around 12 cm wider than its predecessor, the new MINI Clubman provides plenty of space to meet the demands of youthful, urban mobility. Pared down to the essentials, the side view exhibits its qualities at first glance. Classic MINI design cues, such as wheels at the far corners of the car, short overhangs and the incipient wedge shape of the side, signal the dynamic driving experience before a wheel has even turned, while its familiar compact proportions hold the promise of that genuine go-kart feeling. At the same time the stretched roofline and four fully-fledged side doors indicate a larger interior and enhanced functionality. Liberal surface areas convey supreme elegance, while taut lines elongate the side view and fine contouring adds classy highlights and extra dynamics.

Two round headlamps with LED daytime running light rings and a large hexagonal grille create the typical MINI face. These iconic design cues are mounted like jewels in high-quality chrome surrounds, lending an exclusive touch to the front end. Other style-defining details such as the side scuttles with indicators have likewise been redesigned. Horizontally aligned as before, the indicator unit no longer emerges from the side scuttle join but now stands alone.

Viewed from behind, the new MINI Clubman comes across as broad and athletic. The body widens as it cascades towards the bottom edge, lending the vehicle an emphatically stable stance at the rear along with a muscular wheel alignment, an impression further accentuated by the tail lights which are, for the first time, arranged horizontally.

The typical split rear doors make the MINI Clubman a six-door model. Above all in tight parking spaces they offer the option of a smaller or bigger loading aperture, as required, without the need to open an expansive tailgate. The typical wrap-around door frame is now represented by an edge in the bodywork that encloses the entire rear like a discreet clasp.

The interior of the new MINI Clubman has also expanded along with the exterior. The cabin’s new dimensions are made palpable through a generous sweep, clear surfaces and a more “grown-up” sense of space. Here the new MINI Clubman reveals a new level of exclusivity and style.
The defining element of the MINI Clubman interior is its broad instrument panel, which adopts the generous surfaces areas of the exterior and brings them inside the car. Enclosed by a new take on the hallmark MINI ellipse – a surrounding bracket as a highlight feature – the upper section of the instrument panel appears to be floating. This strikingly formed, all-encompassing loop is the pivotal design theme in the interior of the new MINI Clubman and is also taken up in the design of the door and the centre console. 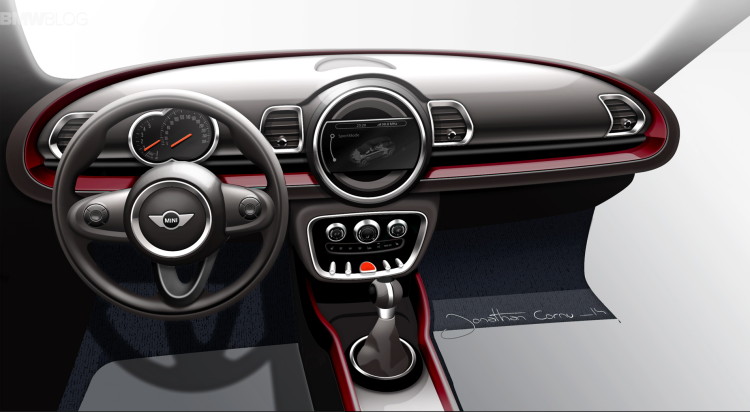 As in the new MINI 3-door and 5-door, the instrument cluster in the new MINI Clubman is positioned on the steering column. The round centre console now comprises above all entertainment and navigation functions, as well as further infotainment options.
For optimum everyday utility the new MINI Clubman offers an abundance of storage options. Smart solutions, a multi-adjustable rear seat and a load space that can be made level when required all ensure segment-style functionality. Another striking feature is the emphatic single-seat concept of the five-seater that extends its athletic and “grown-up” character into the rear of the vehicle. 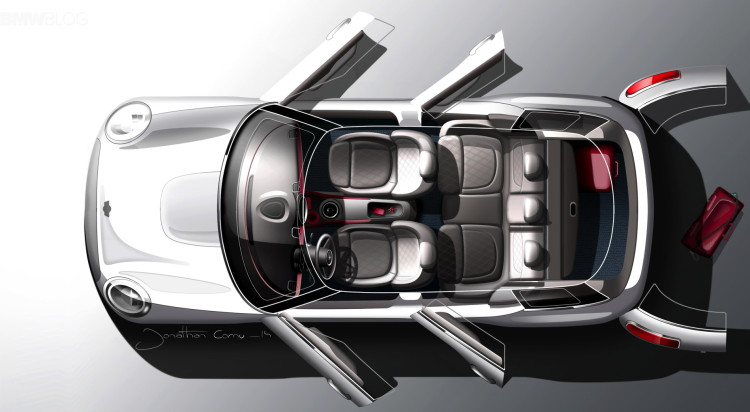 Under the motto “Hide & Reveal”, the new MINI Clubman plays with the contrast between restrained elegance and creative extroversion. On second glance, the transparent and classy interior reveals intriguing hidden details such as the exclusively designed tartan pattern adorning various materials in the numerous cubbies and storage facilities, such as the cupholders, glove compartment and door pockets.

Color and trim design – quality in every detail.

The color and trim concept of the new MINI Clubman transports MINI’s self-image to a new vehicle class. With stylishness, attention to detail and a high degree of personalisation options, it generates highlights seen for the first time in this form. The new MINI Clubman will launch with a choice of 12 exterior color variants, with the powerful Melting Silver Metallic and Pure Burgundy Metallic making their world premiere. In the cabin, colours and materials turn the spotlight primarily on the new form language through different colour-contrast variants of the brackets.

A special highlight is the backlit decorative trim of the “MINI Yours Interior Styles” in the front doors: featuring a partially translucent pattern that tapers off towards the rear, the surfaces benefit from highly effective multicoloured backlighting courtesy of hidden light sources. The interplay of the various decorative surfaces, the optional multicolour backlighting and the ambient lighting with a range of daytime and night-time designs makes for a unique ambience in the cabin. 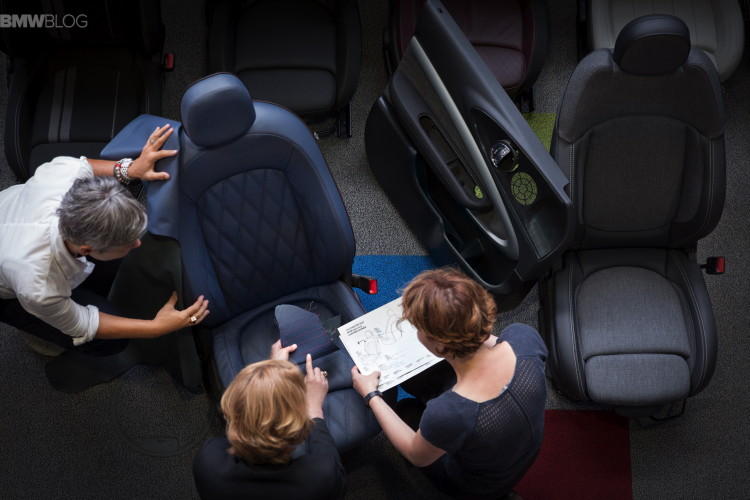 For the ultimate in personalisation there is also a choice of nine seat covers, including the new variant Leather Chester in an exclusive Indigo Blue shade. With their diagonal quilting, these new-generation seats evoke the classic Chesterfield sofa. The design of the sports seats thus cites the British heritage of MINI while delivering a contemporary interpretation of its characteristic diamond pattern for the automotive context.

MINI designed the “MINI Gentleman’s Collection” to coincide with the introduction of the new MINI Clubman. Collaboration with talented young Italians resulted in six premium accessories for gents that combine Italian craftsmanship with creative and innovative details inspired by the new MINI Clubman. The Capsule Collection consists of a hat, a pair of sunglasses, a pair of shoes, a bag, a fragrance and a shaving kit. Characteristic design elements, materials, colours and details from the MINI Clubman were the godfathers for subtle connections between the design of the accessories and this new member of the MINI family. 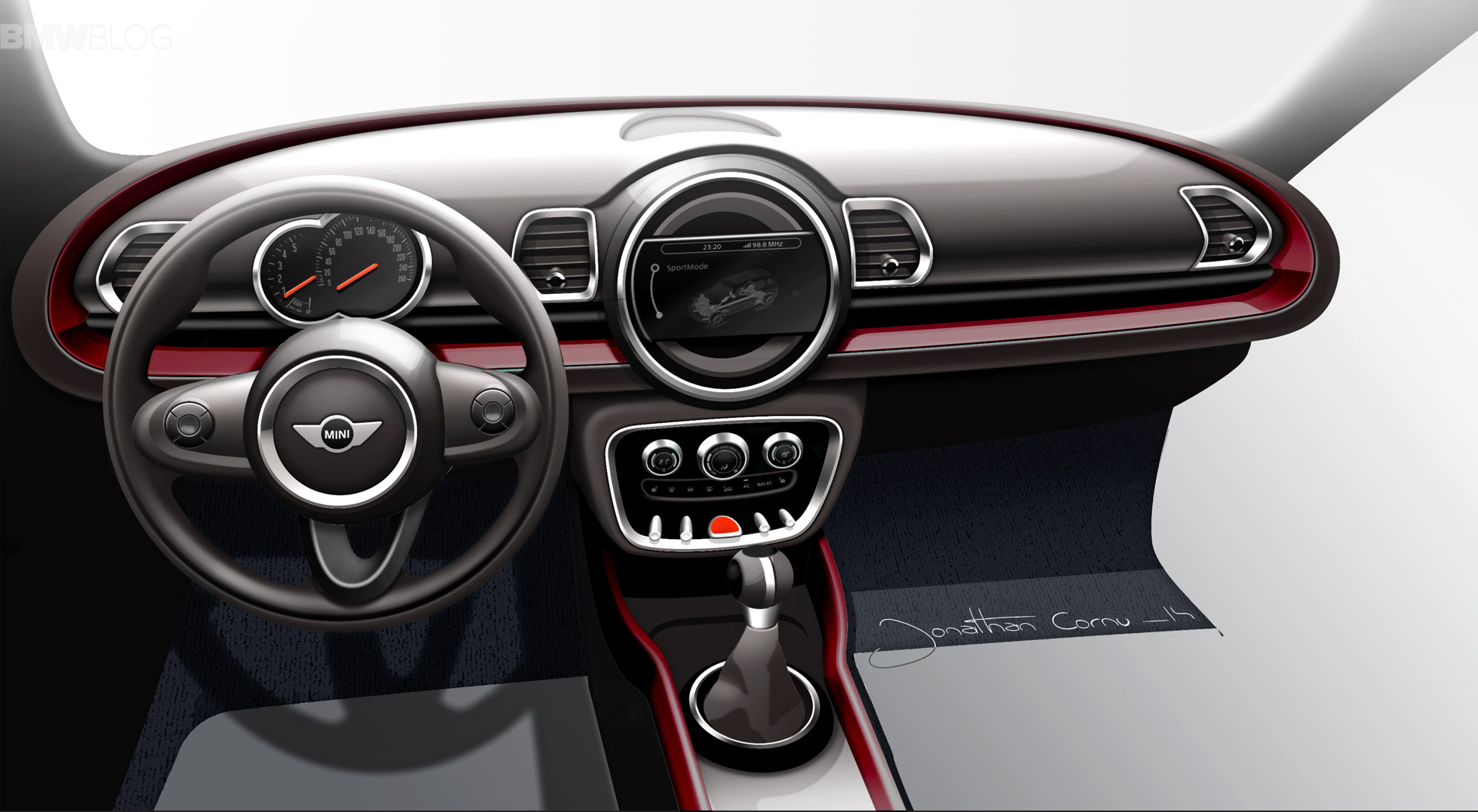 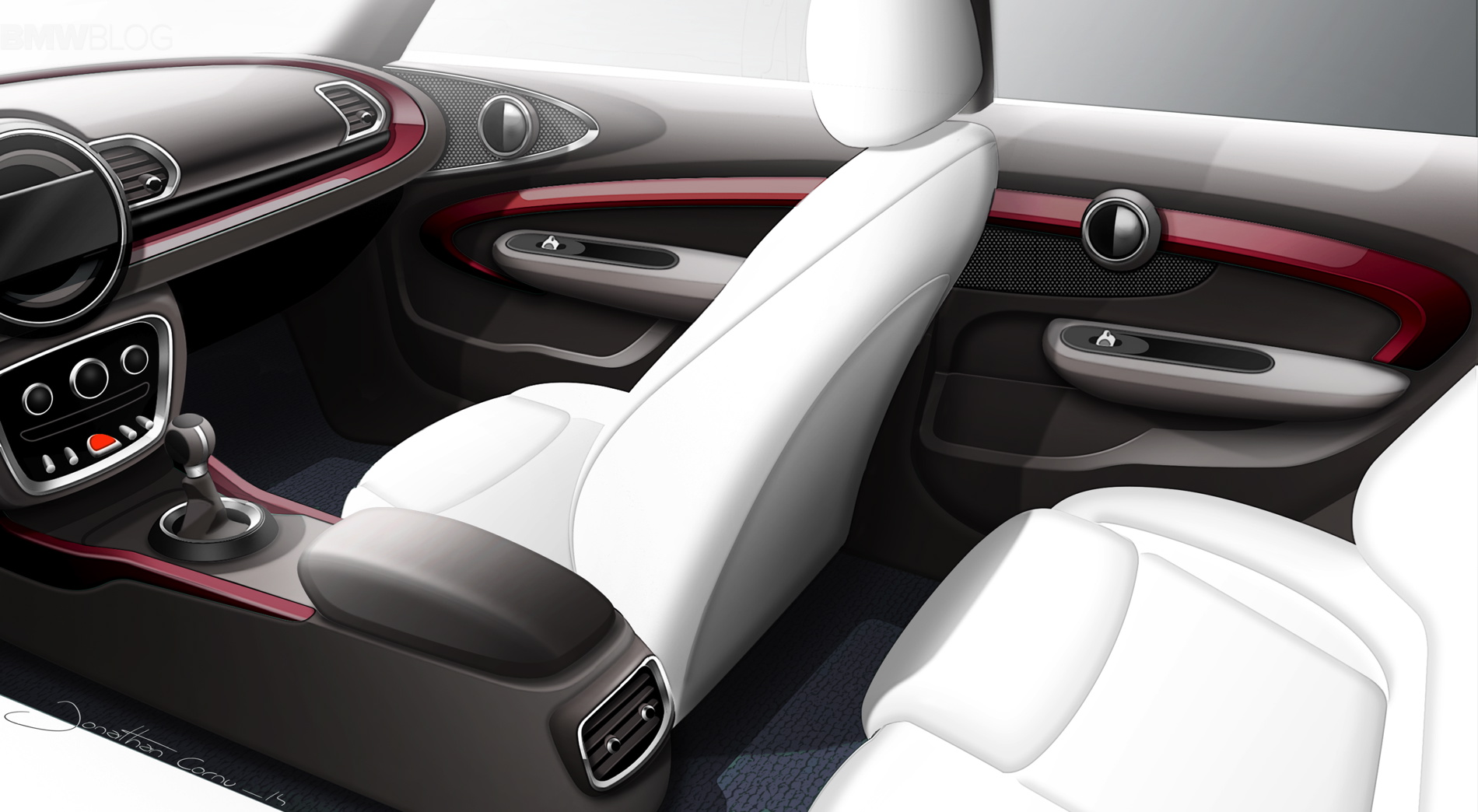 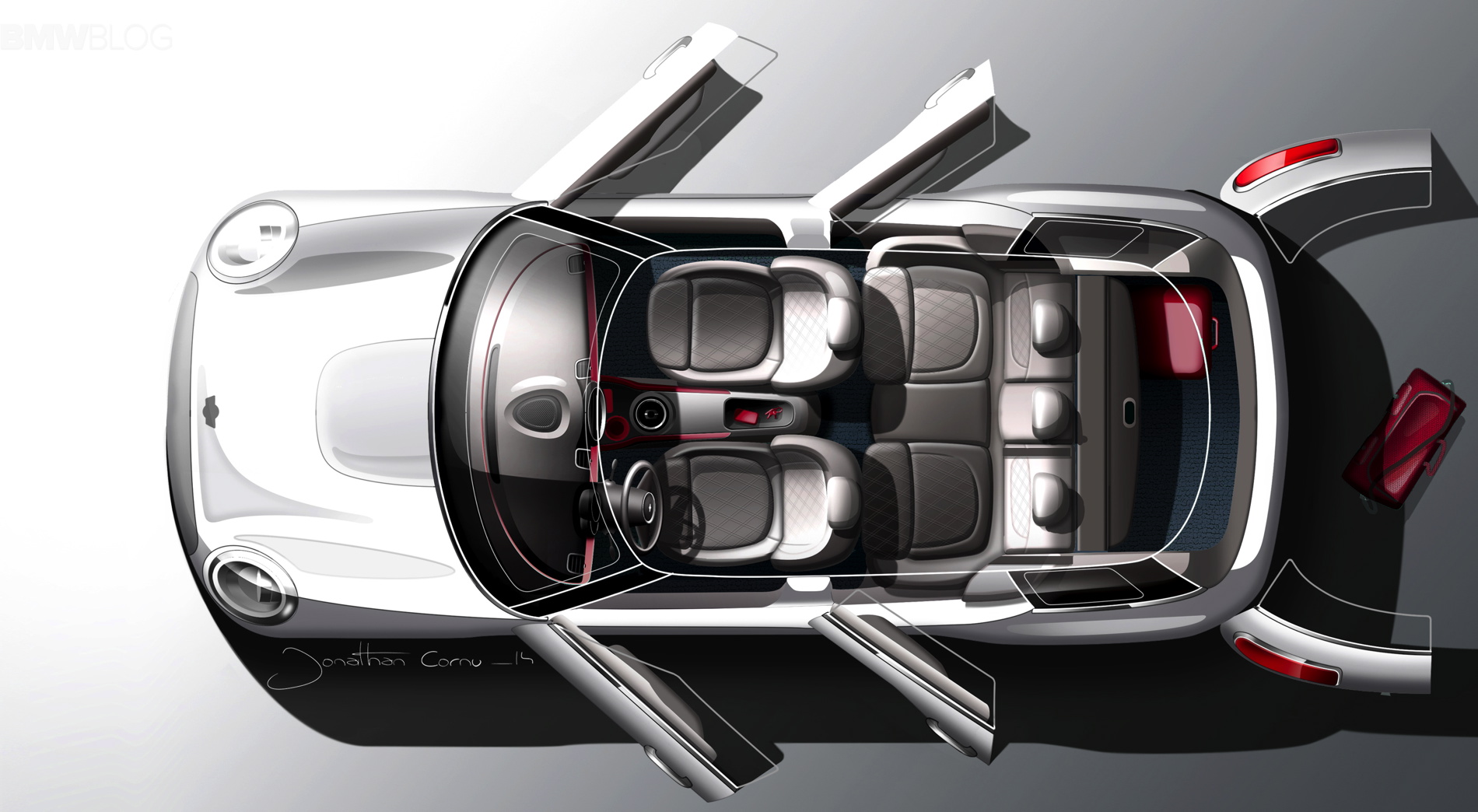 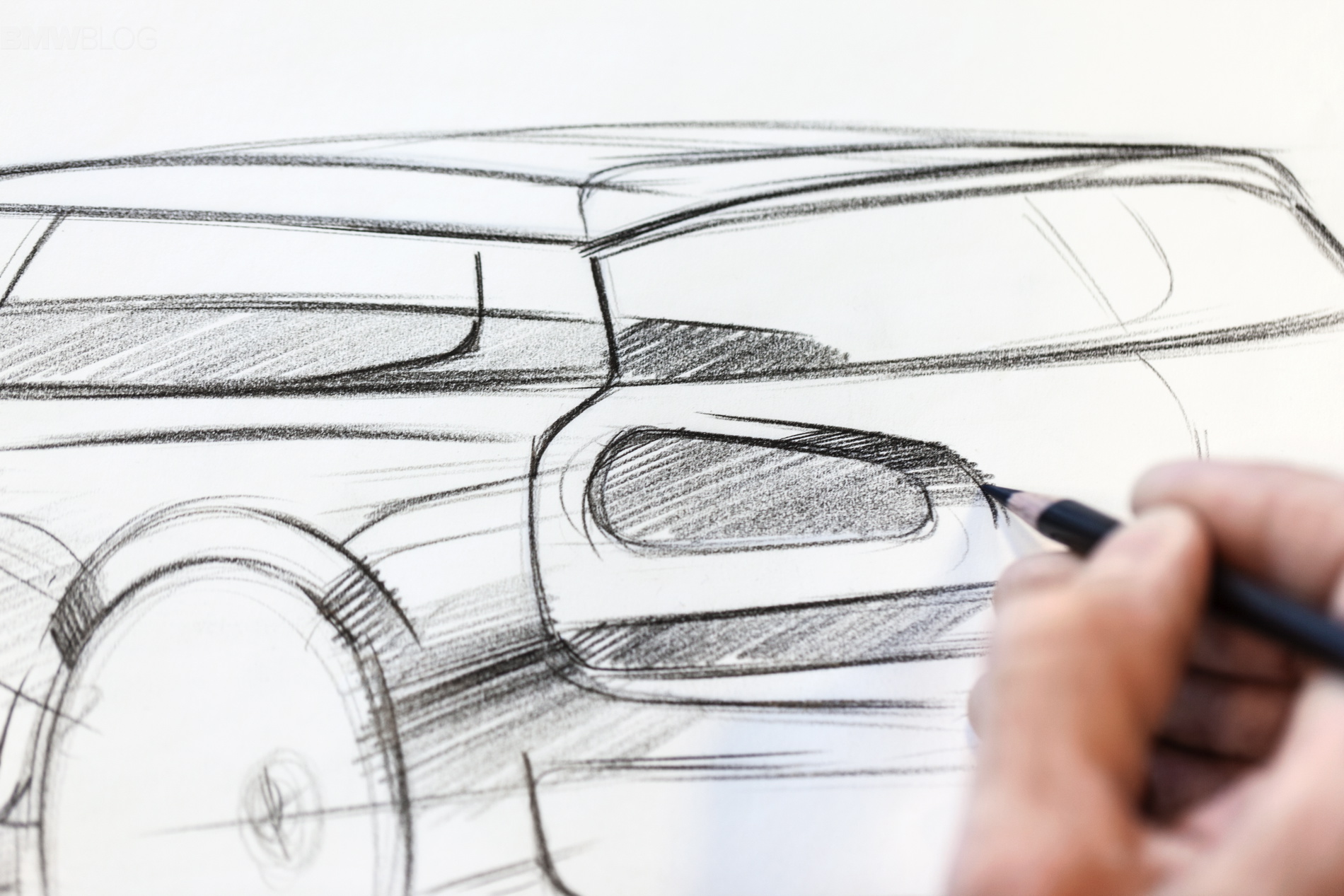 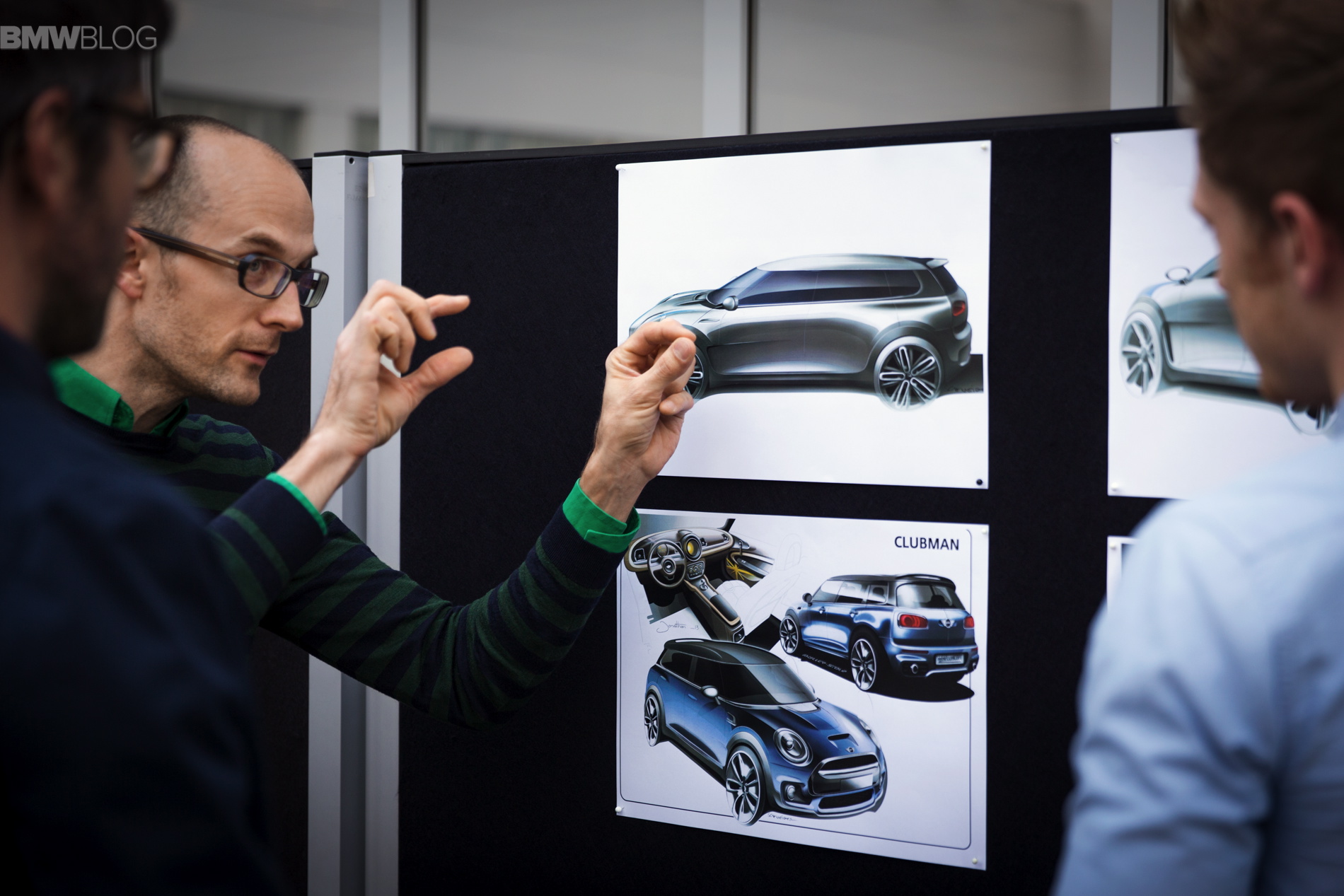 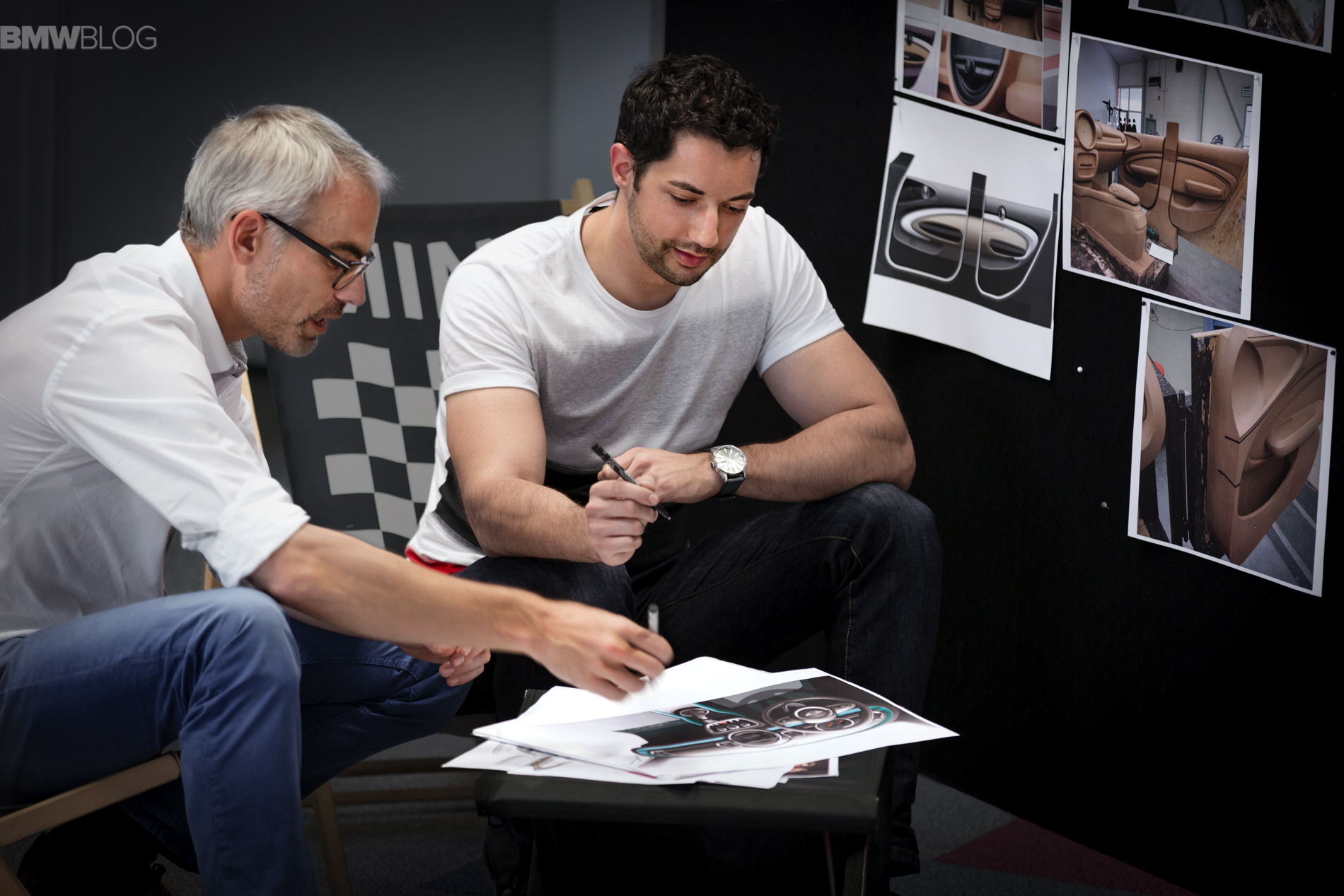 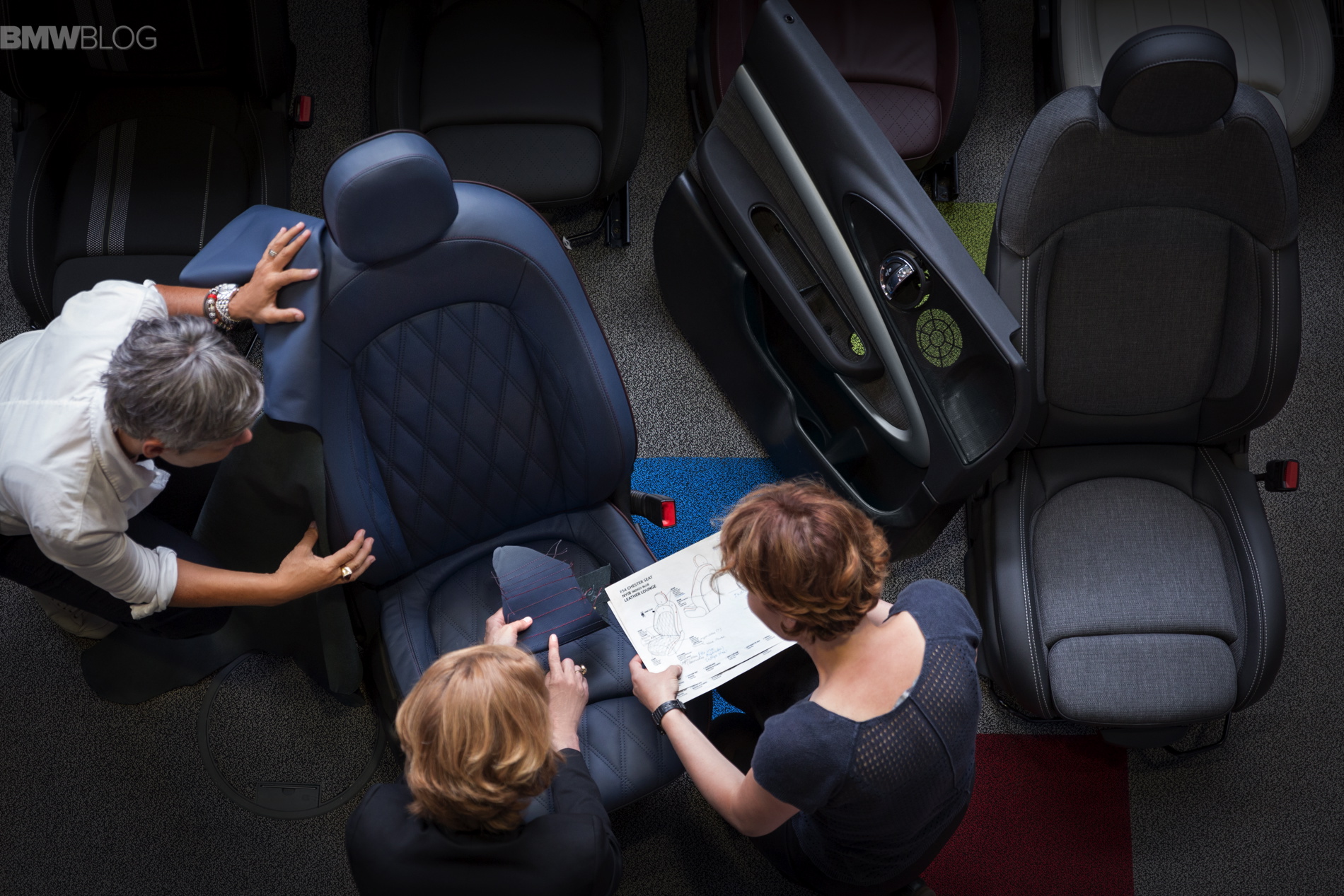 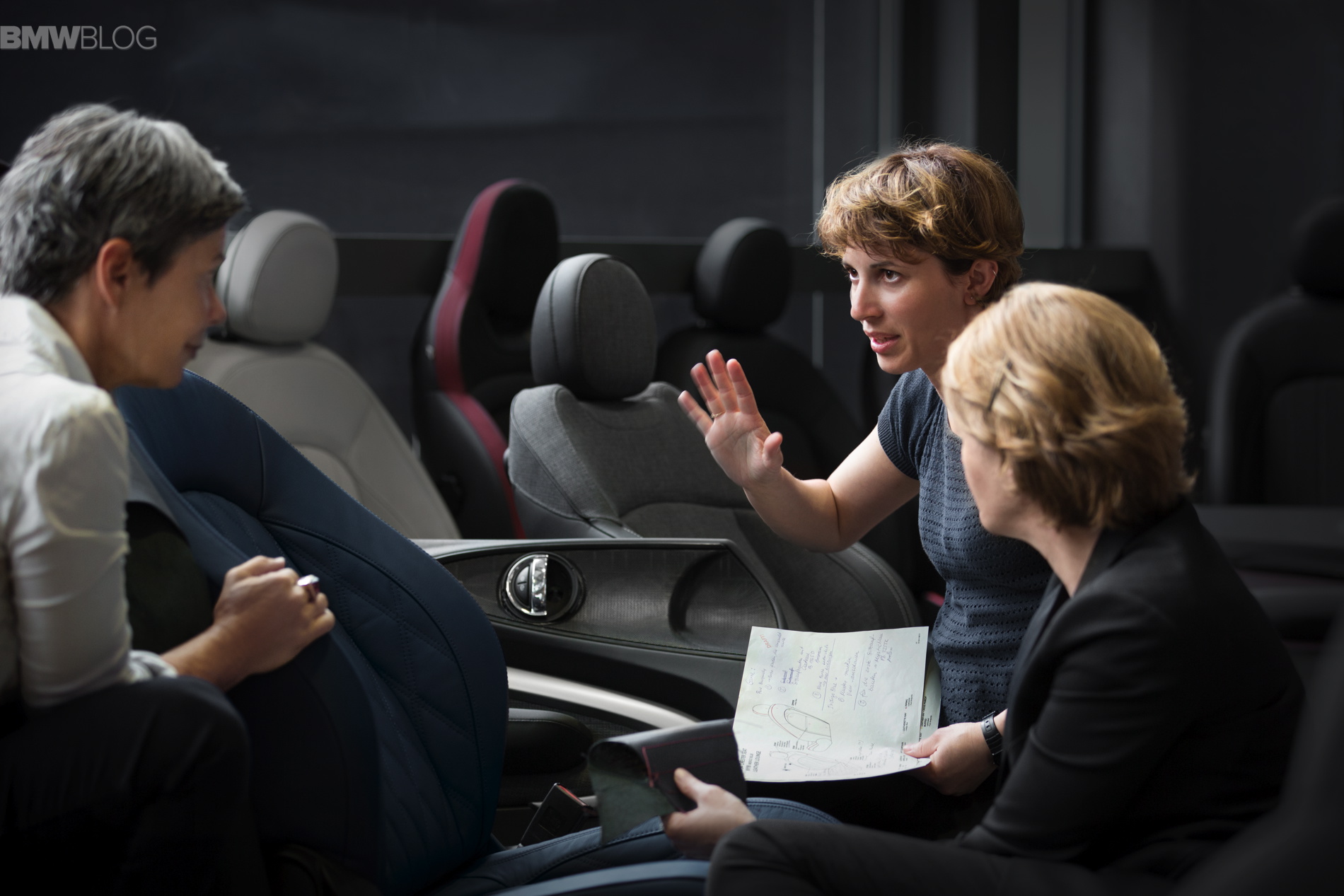 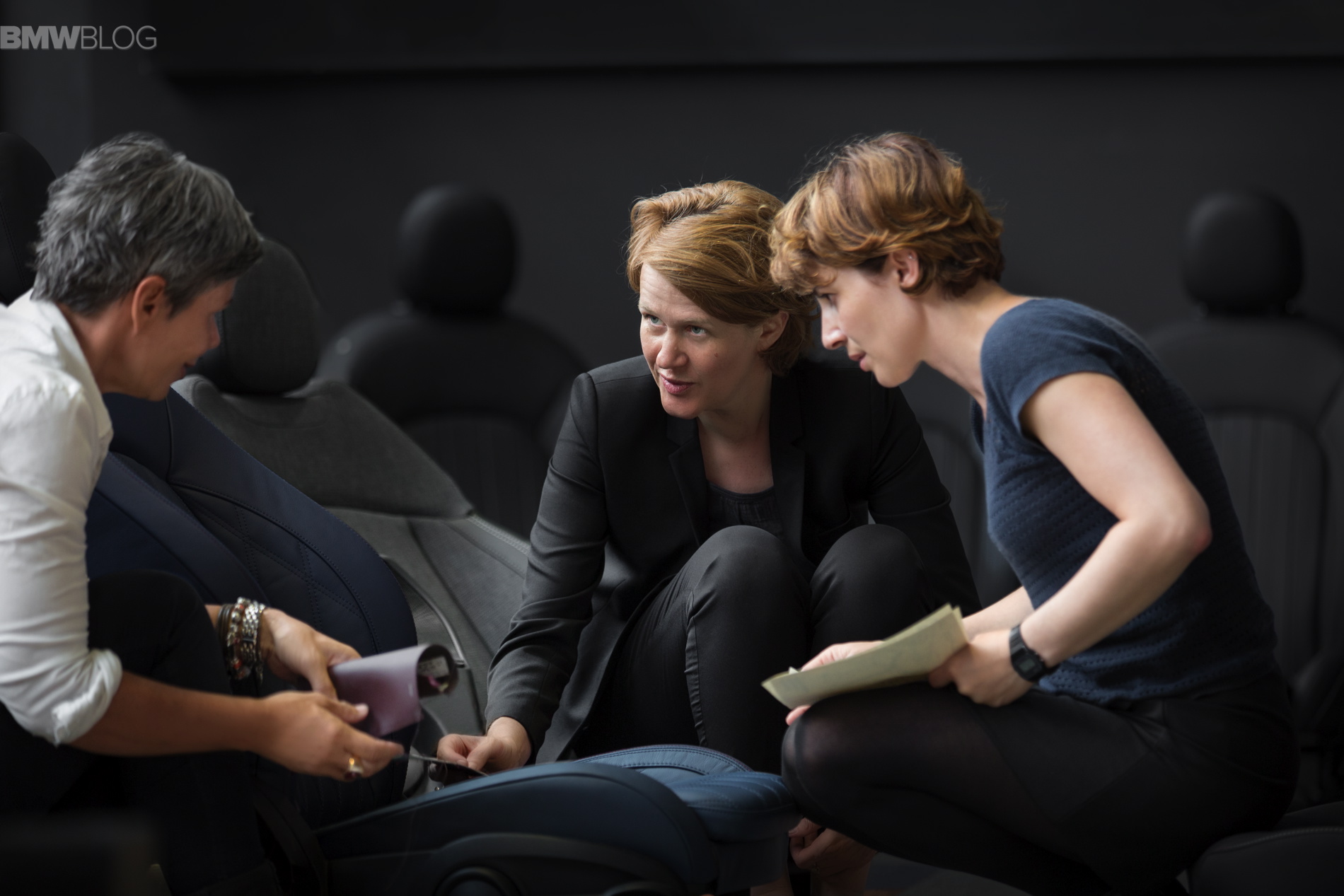 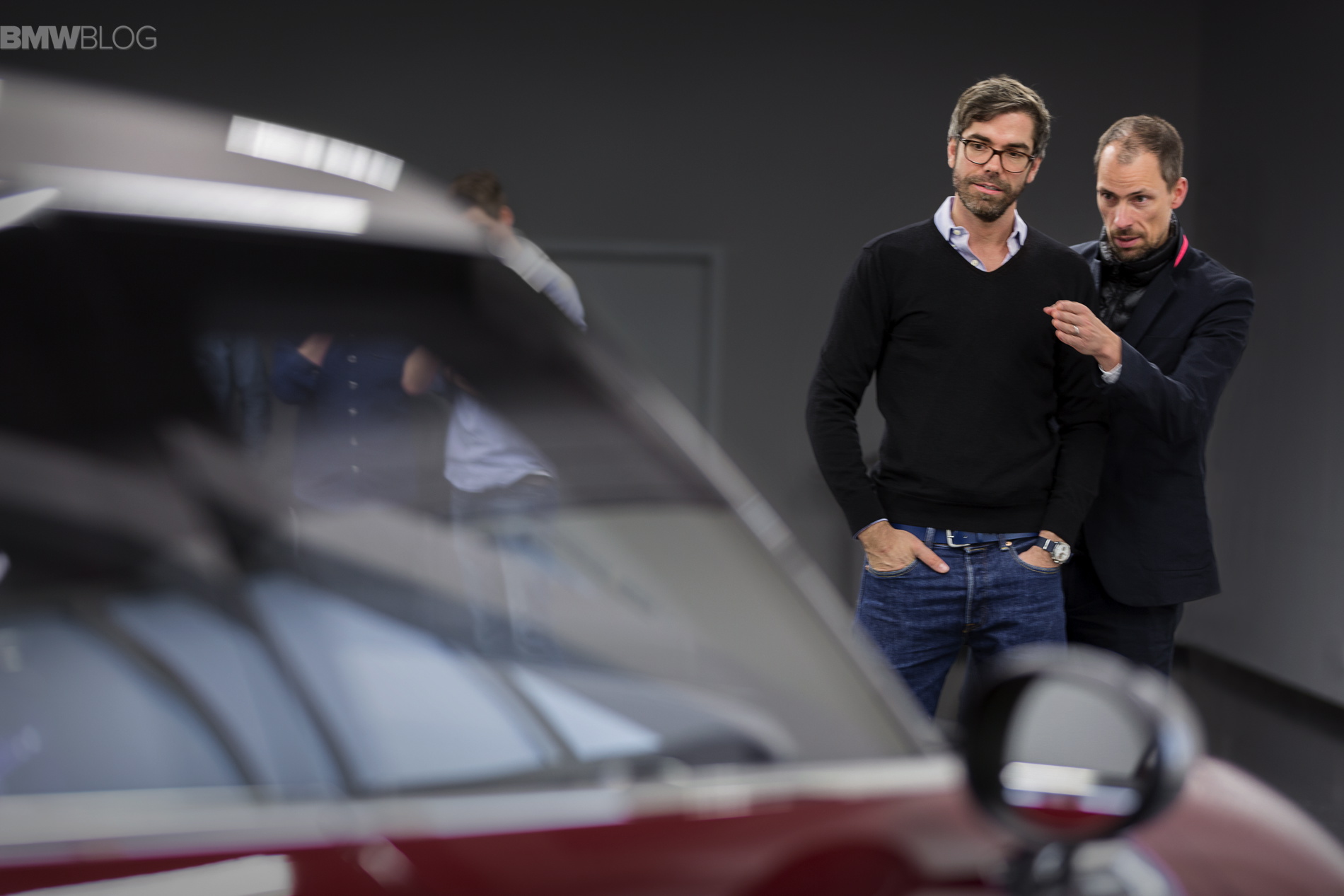