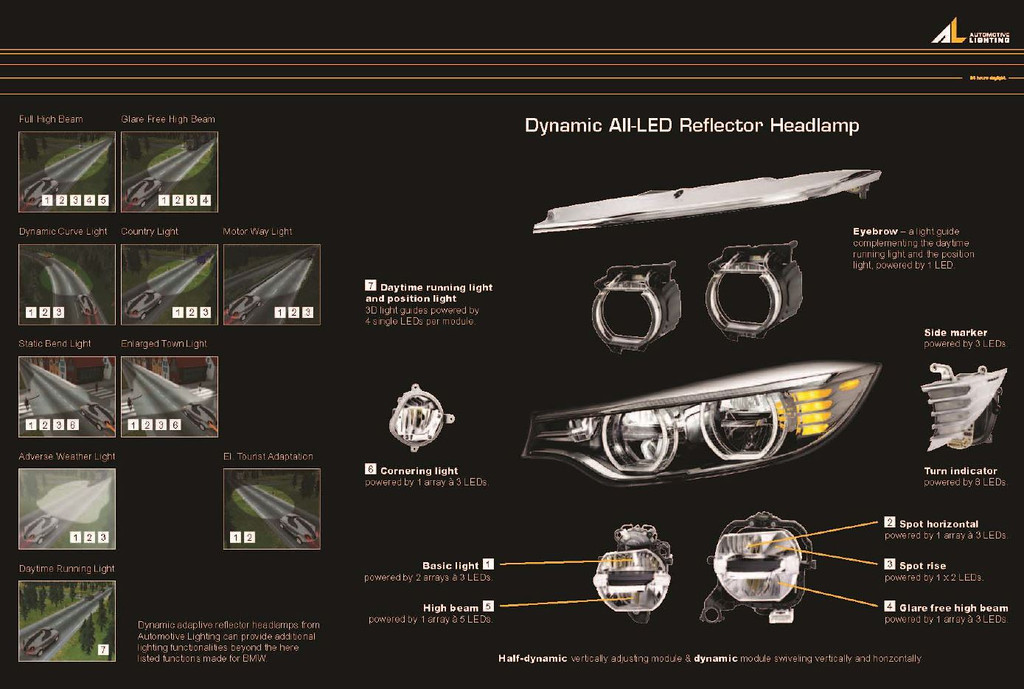 Automotive Lighting, the company responsible for the headlights seen on the new F80/F82 M3/M4 and the new 4 Series, are giving us full picture which depicts the LED technology.

Hussein Al-Attar, the designer responsible for the 4 Series Coupe headlights, described to us in the past the design thought behind the good looking lights.

The BMW 4 Series Coupe concept uses basically the same LED lighting technology found on the 6 Series lineup, but moves from rounded lines to an open hexagon. Al-Attar notes that connecting the light-emitting element to the grille — which is completely closed, by the way — is a new touch. It looks better in person than the LEDs on the current 3 Series sedan and is likely to be retained for the production BMW 4 Series coupe. 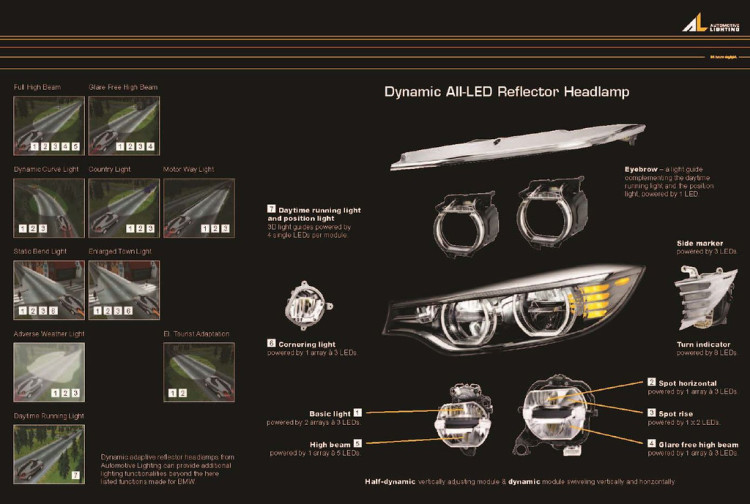 “We had a very clear picture in mind from the beginning,” Al-Attar says about designing the 4 Series Coupe concept’s lights. “At the end it was really fine-tuning and talking about where to put the line” connecting the lights to the grille, a few millimeters higher or lower.

But what about the actual tech behind the lights?

In rear lamps, applications with red and yellow LEDs already are state of the art in lighting technology. In headlamps, especially white LEDs are necessary that for main functions must provide a better light performance. White LEDs have already been used for signal functions like position or daytime running light in some serial projects. With the development of the first Full-LED headlamp for Audi R8, Automotive Lighting set up a world premiere. For the first time, all light functions of a serial headlamp are being realized in LED technology, these are low and high beam, daytime running light, turn indicator and position light.
LED technology offers new opportunities for the future concerning styling, technology and energy consumption.

LEDs especially stand out for the following characteristics:

LEDs are based on semiconductor technology. The light is emitted directly out of the semiconductor substrate when a forward voltage is applied. The colour depends on the band-gap energy of valence and conduction band for the materials forming the semiconductor. The amber colour is directly generated by the LED by Aluminium Indium Gallium Phosphide (AlInGaP) semiconductor material. Through the luminescence conversion process, white light is generated. A blue diode in combination with an applied converter material, the colour blue and yellow, the combination of which is perceived as white light.

To achieve the targeted light patterns with LED applications in headlamps, two conventional opportunities are available that are already implemented in filament and also in gas discharge lamps. Either the light of the LED is redirected through a reflector in order to achieve the light pattern on the road. Or, alternatively compact systems can be applied that project the light in the street using a lens.
Due to their small sizes, LEDs offer the opportunity to combine both light systems for the first time.

Detailed information concerning light technology within the Audi R8 Full-LED headlamp can be found here. (at the moment only available in German)

In contrast to Halogen or Xenon systems, LEDs emit “cold” light meaning that no infrared radiation is being produced. Due to the high efficiency, 20% of the input energy are transformed into visible light (for comparison a filament bulb only transforms 5%) – the rest of the energy generates heat within the semiconductor chip. Luminous flux, colour and forward voltage are dependant on the temperature. As soon as the allowed temperature is exceeded, the lifetime of the LED will be badly affected or in worst case will be destroyed.
To protect the hottest part, the chip, cooling elements with a controlled air transportation system have been developed. The systematic direction of the warm air to the bezel of the headlamp is so simultaneously being used for de-icing and decondensation.

The application of LED technology significantly contributes to the avoidance of CO2 emission and the reduction of fuel consumption.
This aspect especially gains importance with the implementation of daytime running light (DRL). DRL with LED needs 14W of energy, whereas the use of conventional vehicle lighting at day (low beam, rear lights, position lights) consumes 300W.