BMW i3 earns 4 stars in Euro NCAP Crash Tests – What Led To This?

Home » BMW i3 earns 4 stars in Euro NCAP Crash Tests – What Led To This? 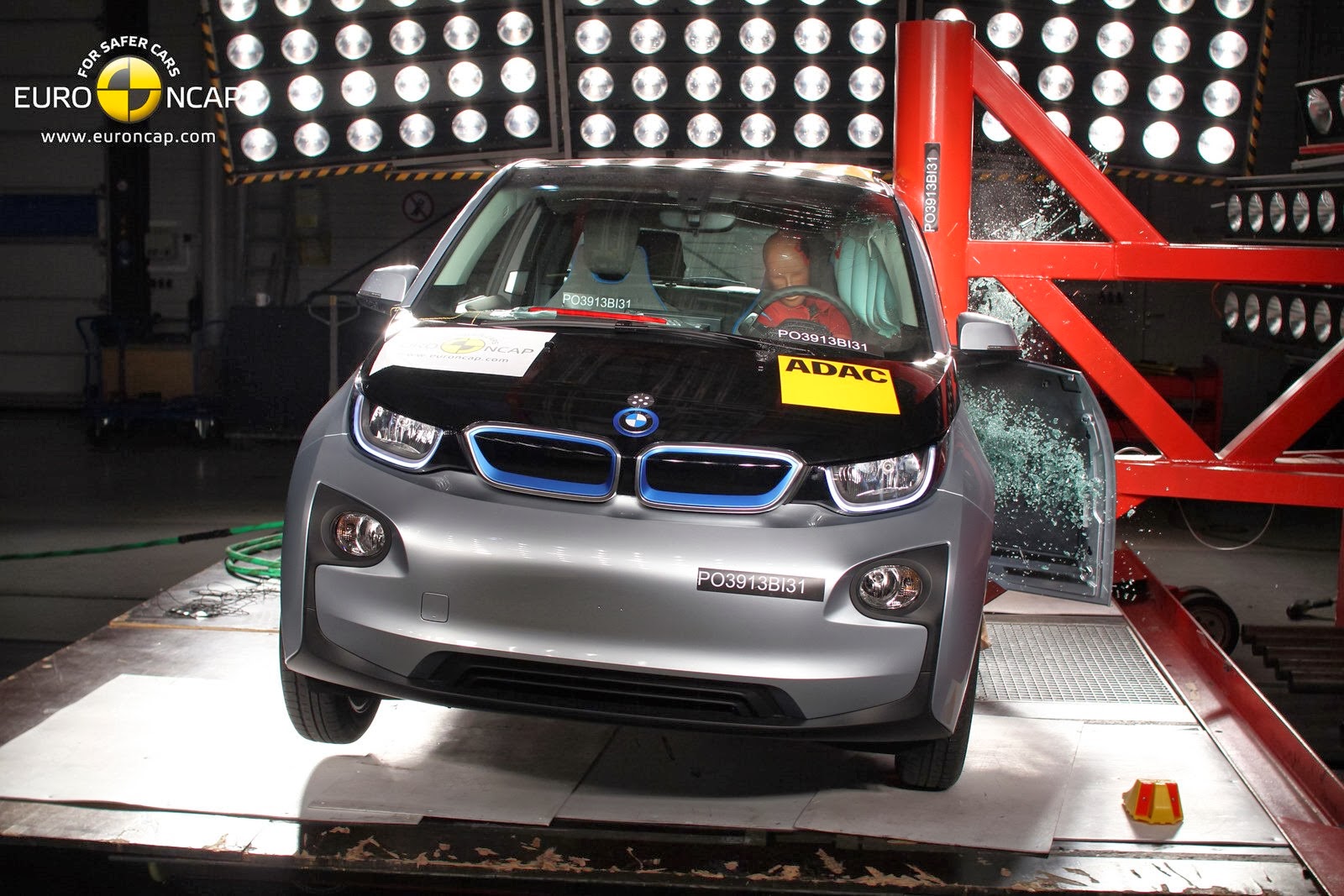 Tom Moloughney, one of the first electronauts in the U.S. and a huge advocate of electric mobility and BMW EVs, writes an article on the Euro NCAP Crash Tests results which awarded the BMW i3 a rating of 4 stars out of 5 possible. What has led to this unexpected rating? Let’s see his opinion on the topic.

Much to the surprise of quite a few people, the BMW i3 earned a 4 out of 5 rating in the Euro NCAP crash tests. BMW has been proudly proclaiming how incredibly safe and strong the car is due the the rigid carbon fiber passenger cell. In fact it was so strong, they were able to eliminate the need for a proper B-pillar and offer the coach style door setup. So why not a top score? Well like anything, the devil is in the details. 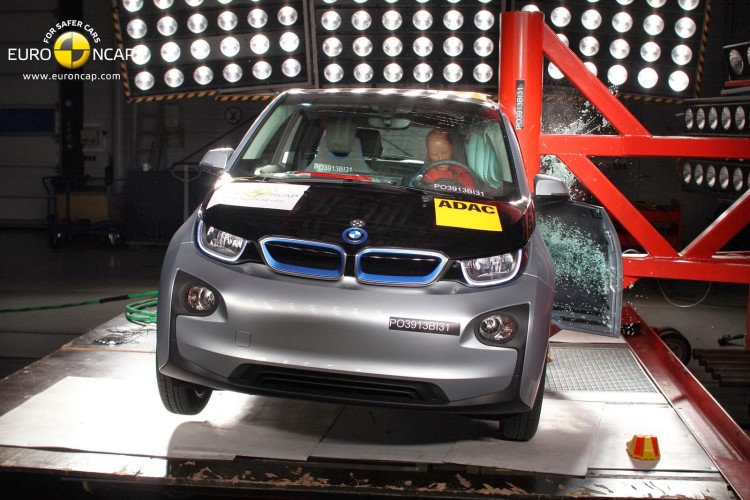 Most people don’t want to waste time reading crash test scores, they usually just look at the star rating. If they see a five star rating, they assume the car is as safe as it should be and anything less than a 5 out of 5 can be viewed as a failure on the manufacturers part to produce a car that’s as safe as possible. So what went wrong here? We’ve been hearing how strong the CFRP passenger shell is and how incredibly well it will protect the passengers in the event of a crash for a couple years now. In fact I personally had a lengthy conversation with BMW board member Ian Robertson about this and he went on and on about how incredibly well the i3 did in their internal crash tests, so why now did it not do well? The truth is, the car actually did very well in crash tests, in fact it did actually score 5 star rating in crash tests for passenger protection, but the overall combined score fell a couple points under the threshold for 5 stars. 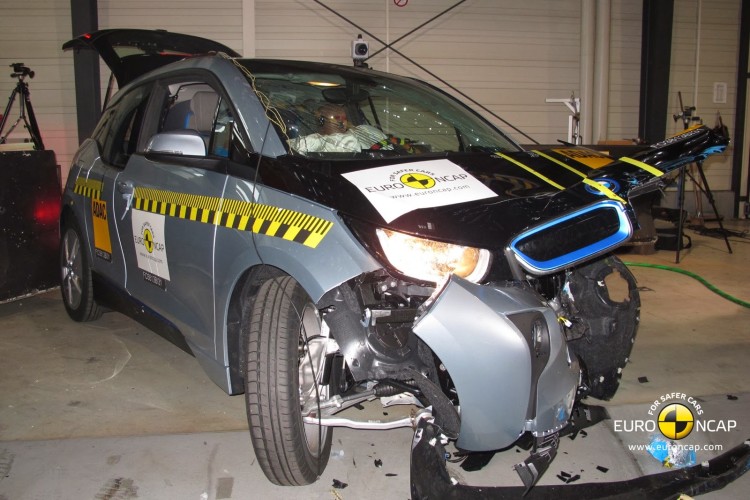 What held them back? When I tell you you’ll either laugh off your seat or shake your head at the foolishness that allowed them to miss the coveted 5 star rating. Ready? Here goes: For some crazy reason, they made the seat belt warning light for the rear seats not a standard feature, instead you have to get it in a package that is an optional. Therefore, if you don’t have the option, you don’t get the warning light that tells you if the rear seat passengers buckled up. That, plus the fact that the speed regulation is optional in most European countries (that is the feature that displays the current speed limit of the road you are driving on and it’s a standard feature on all US i3’s) conspired to give the i3 an extremely low score in the “Safety Assist” category. Those two oversights caused the overall score to dip just below the 85% needed to achieve a 5 star rating. The fact that they were rated 4 of 5 stars really had nothing to do with how the passengers fared in the crash tests, because the i3 actually had high scores in that area. In fact, the i3 achieved a higher score for passenger safety than a Chevy Volt, which did achieve an overall 5 star rating. (see graph below for comparison).

This is a pretty substantial mistake on BMW’s part in my opinion. While the car tested out to be very safe in crashes for all of the occupants, the 4 out of 5 rating will give the casual observer the impression that it may not do well in crashes. Could it be BMW thought the crash scores would be so high they would overcome the low score in the Safety Assist category and still average out to be 5 stars? Whatever the cause I can’t help but think this was a major faux pas. This sets the stage for an interesting and highly anticipated crash test rating for the US when NHTSA and the IIHS get their hands on some i3’s in the Spring. 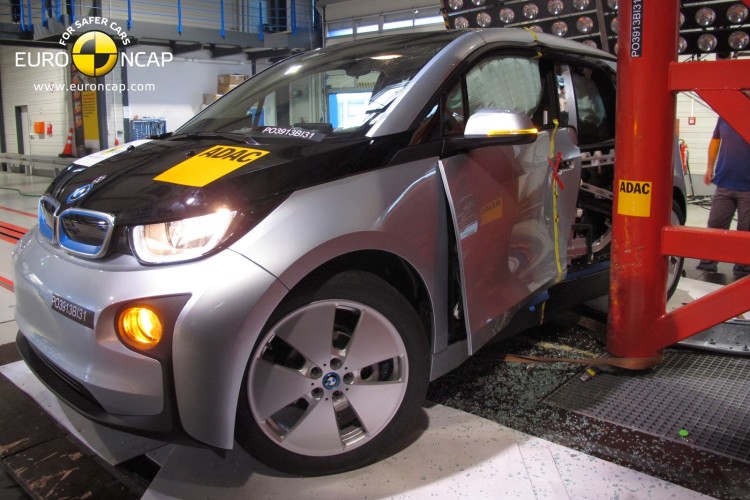