On September 10, BMW’s first hybrid sportscar will make its debut at the 2013 Frankfurt Auto Show. The BMW i8, also referred internally as the progressive sports car, aims to set the bar really high in they performance hybrids segment, one that is expected to grow in the next years.

Recently we had the opportunity to test drive a pre-production version of the upcoming BMW i8 at a BMW secret facility in France where we experienced both the ride and the process thought behind the car.

Here are the top 10 things to know about the BMW i8: 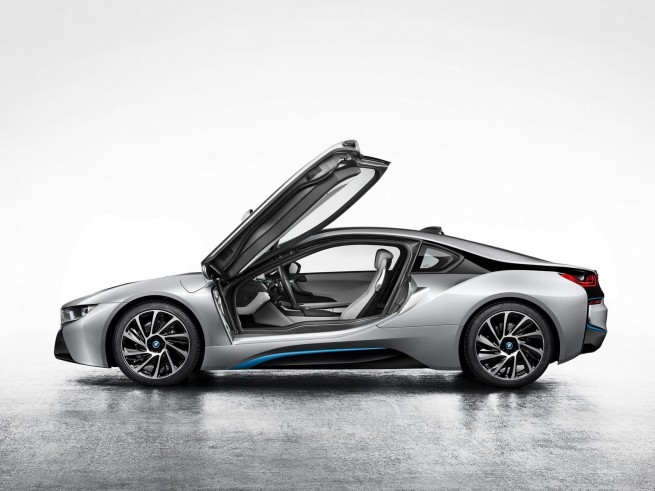 1. BMW i8 has the lowest center of gravity in the current BMW lineup.

2. First BMW to use the new family of engines: 1.5 liter based on a 3-cylinder architecture. Essentially a half-six engine.

3. First BMW with three drivetrains: FWD, RWD, or AWD. Due to its unique architecture, the BMW i8 can run on front wheels, rear wheels or all four wheels. In electric mode, the front-wheels are activated, on gasoline, the rear wheels are being spun, while the all-wheel drive system kicks off when the car uses the electric motor in conjunction with the rear-placed conventional engine.

4. Gorilla Glass. Same glass used on modern smartphones and tablets. The special glass is used for the rear window for sound absorbing.

5. Lighter than the current BMW M3. Thanks to the CFRP used, the BMW i8 weighs only 1,490 kilograms, 200 kg lighter than the M3. This makes the i8 hybrid to be faster than the more powerful M3.

6. The electric motor which drives the front wheels comes with a GKN two-speed automatic gearbox. The motor always run in first gear while in eDrive mode but switches directly to second gear in the mixed modes.

7. First BMW production car with butterfly-style doors. Sometimes referred to as “lambo-doors”, the unique opening will make getting in and out of the car a bit more complicated than usual, but the cool factor is worth the pain.

8. Despite its size and power, the BMW i8 sits on slimmer than usual tires – 20 inches aerodynamically designed wheels, 7.0 inches wide at the front and 7.5 inches wide in the back. The wrapper around the wheels are 195/50 and 215/45 tires, in standard form, but the car we drove used 215/45 and 245/40 tires. Even with slimmer rubers, the large contact patch offers maximum cornering stability.

9. The electro-mechanical steering system comes from the X3 SAV. Recent BMWs have been criticized for their lack of road feedback and somewhat soft steering, but the BMW i8 does better and gives the steering input we all expect from a bimmer.

Read our first test drive of the BMW i8.