Reactions to the opening race of the DTM in Hockenheim

Home » Reactions to the opening race of the DTM in Hockenheim

It was the perfect start: led by a one-two from Augusto Farfus (BR) and Dirk Werner (DE) in Hockenheim, BMW Motorsport enjoyed its most successful DTM race since returning to the popular touring car series last year. Five BMW drivers finished in the points, and Farfus also clocked the fastest lap of the race with a time of 1:34.504 minutes. Read here what BMW Motorsport Director Jens Marquardt, the four team principals and eight drivers had to say after the successful start to the season.

“That was a really awesome start to the season. I must pay a huge compliment to everyone in the team – particularly to Augusto Farfus and Dirk Werner, of course, who presented us with our first one-two since we returned to the DTM. Augusto did not make a single mistake, and BMW Team RBM got its strategy spot on. The same can be said of BMW Team Schnitzer, who helped Dirk climb from 20th to a remarkable second. His fightback was simply fantastic. I hope the first race of the years was as thrilling and exciting for the fans as it was for us. I feel sorry for Timo Glock. He was looking very good at the start and did a great job of cutting through the field. However, any new team is always on a learning curve, and that unfortunately includes set-backs. That makes me even more delighted that his team-mate Marco Wittmann finished in the points in his first race, having started from right at the back.” 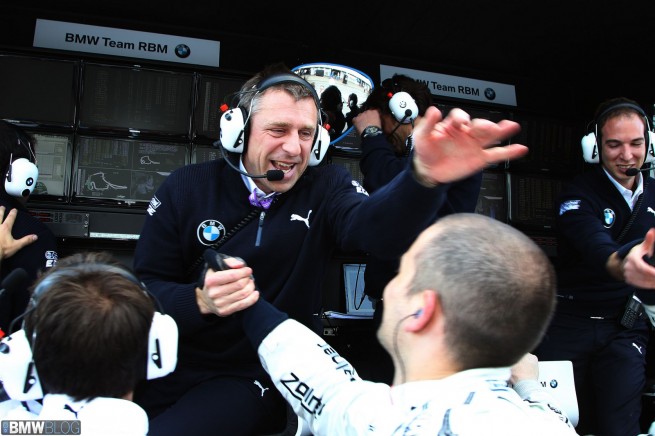 Bart Mampaey (Team Principal, BMW Team RBM):
“I think we have definitely confirmed our arrival in the DTM with this victory. It took us a while to find our feet in 2012, and we also took a good look at ourselves in many areas during the winter break. That is not easy, and I would like to thank every single member of my team for their efforts. We drew exactly the right conclusions – and were rewarded with the victory today. The race was complicated today, and we had an awful lot of decisions to make. We took a bit of a chance with the strategy, but it paid off in the end. Augusto Farfus produced a fantastic performance. And Joey hand can also be very happy with his debut for our team.”

Charly Lamm (Team Principal, BMW Team Schnitzer):
“That is obviously a fantastic start for BMW. Dirk Werner went through a real emotional rollercoaster ride this weekend. After a difficult qualifying, he fought his way from the back of the field onto the podium. That is unbelievable. He deserves a huge compliment for that performance. The same goes for the pit crew and engineers. Our stops and the strategy were very good. Bruno Spengler lost ground in the second stint, for reasons yet unknown. After that, however, he also fought very hard and was rewarded with fifth place.” 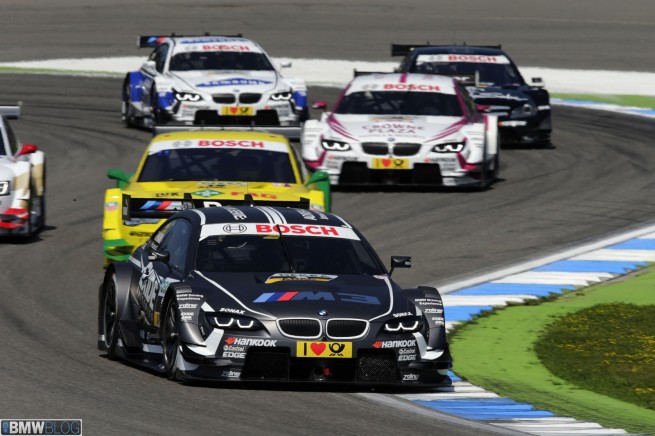 Stefan Reinhold (Team Principal, BMW Team RMG):
“The weekend did not go to plan for our team, as we had started out with high expectations. Even as early as qualifying we were not at the level we wanted to be at. Then came Martin Tomczyk’s false start. Following a collision shortly after the start, we then had technical problems with Andy Priaulx’s car, which we will now take a close look at. He did not have a chance after that. Despite this, I would like to thank my guys. They worked hard during the preparations for the start of the season. We all start from scratch again in two weeks.”

Ernest Knoors (BMW Team MTEK):
“We had a bit of everything this weekend. Yesterday we had a few problems with Marco Wittmann’s car, and today we were unlucky with Timo Glock. However, that is the learning curve we are on in 2013. We can also take a lot of positives from Hockenheim. I am very pleased Marco came through without any technical problems to score our first points. That is a great result. Timo could also have left the race with a good result, but unfortunately we made a mistake. We will learn from that, and continue to work hard.” 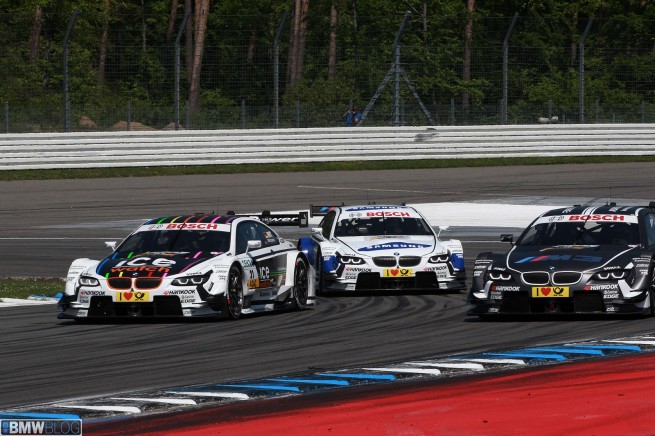 Augusto Farfus (car number 7, BMW Team RBM, 1st):
Tyres: Option-Prime-Option
“That was one of the most exciting races I have ever experienced. Right from the word go, it was clear to me that I would be in with a chance of winning from second on the grid. However, I was uncertain, as nobody could really know what effect DRS and the option tyres would actually have during the race. The fans got to see a lot of overtaking manoeuvres and a super fight out on the track. In the end, my team’s perfect strategy made the difference. It is an unbelievable feeling to start the season with a win. I would like to say a big thank you to BMW Motorsport and BMW Team RBM. That was an incredible start.”

Dirk Werner (car number 2, BMW Team Schnitzer, 2nd):
Tyres: Prime-Option-Prime
“That was a magical feeling for me. I was very disappointed after the poor qualifying result, as I had great hopes for the weekend. I tossed and turned in bed, and did not want to get up this morning. Just a few hours later, it is a completely different story: it will definitely be a long evening. My car was sensational. One of my goals for 2013 was to make it onto the podium. I can hardly believe I have achieved that in the very first race. I have seldom experienced so much action in one race. That was a perfect day for me.” 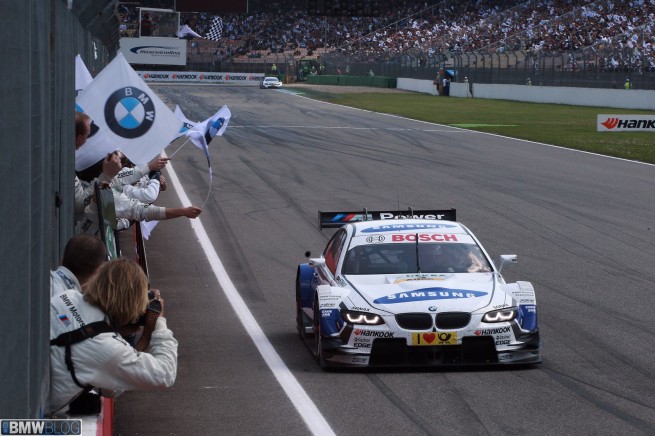 Bruno Spengler (car number 1, BMW Team Schnitzer, 5th):
Tyres: Option-Prime-Option
“I am a bit disappointed, as a podium would have been possible for me today. The start was amazing, and I was able to make up a lot of places. After the first pit stop and the safety car phase, I suddenly had big understeer for some reason. I struggled with that problem up until the end of the race. I just tried to stay on track and drive consistent laps. The team reacted quickly enough to bring me back in to change tyres again. That allowed me to score good points.”

Joey Hand (car number 8, BMW Team RBM, 7th):
Tyres: Option-Prime-Option
“I feel bad about the start, as I just stalled it. I knew I had to make up for it so I said to myself go, go, go. I really pushed for my boys at BMW Motorsport and in BMW Team RBM who have worked so hard over the winter. I really wanted to make a mark in my second year in the series. There are a lot of positives to come out of the first race day of the year, and I am certainly happy.” 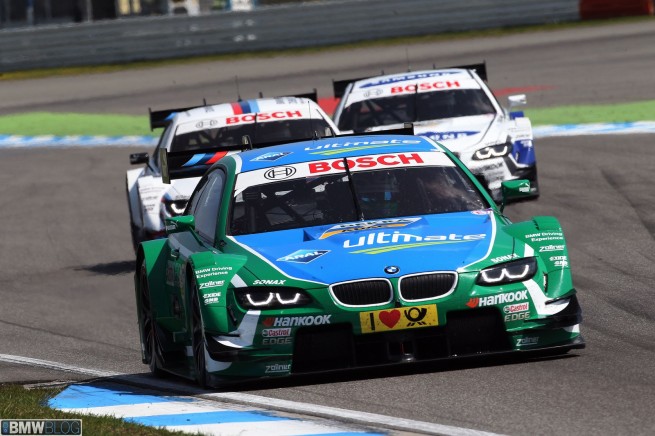 Marco Wittmann (car number 21, BMW Team MTEK, 9th):
Tyres: Prime-Option-Prime
“I am really happy and was not expecting to get into the points after a bad qualifying. Ninth place is a really good result for me. I was a bit unlucky with the option tyres, as I got stuck in a bit of traffic after the safety car and could not take full advantage of them. But still, the result is unbelievable. A big thank you to the team, who did a great job with the strategy and pit stops.”

Martin Tomczyk (car number 15, BMW Team RMG, 13th):
Tyres: Option-Standard-Standard
“The jump start was definitely my fault and I have apologised to the team. It was a bad start to the season after qualifying yesterday, but at least I finally finished a race. I had some good overtaking manoeuvres and the introduction of DRS and the option tyres seems to be working out well. I am looking forward to the coming races.” 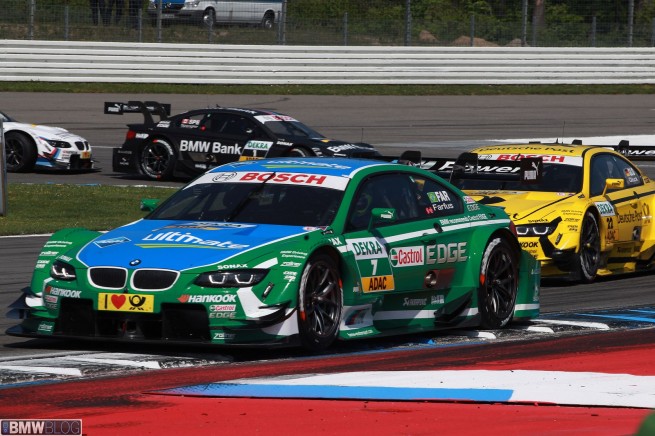 Andy Priaulx (car number 16, BMW Team RMG, 17th):
Tyres: Standard-Option-Standard
“Not a good weekend. We had the potential, but at the end of the day the car had mechanical issues with second gear. I also took a few hits on the first lap, which resulted in floor damage to the car. However, I am really encouraged by the fact Augusto Farfus won and Dirk Werner came from 20th to second. This proves just what is possible in the DTM this year.”

Timo Glock (car number 22, BMW Team MTEK, DNF):
Tyres: Option-Standard
“Generally speaking I will take a lot of positives from my first DTM weekend. I got off to a good start and was already tenth by the end of the opening lap. After that I continued to fight my way through the field and tried to implement our strategy as well as possible. However, I came off the track in the Sachs corner and had to plough through the gravel. We came straight in for our pit stop after that. Unfortunately, one of the wheels was not properly in place. I made a mistake today, and so did the pit crew – that is motorsport. Congratulations to BMW, Augusto and Dirk. The guys did a great job.” 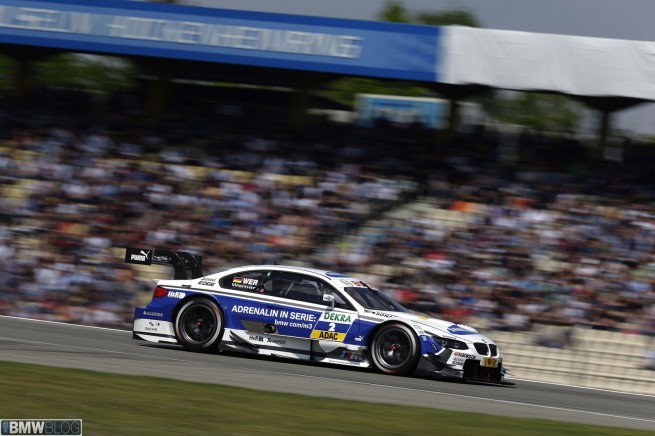 Standings after 1 out of 10 races.