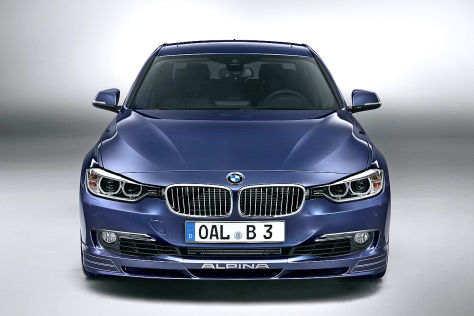 Ahead of its world premiere at the 2013 Geneva Motor Show, ALPINA is releasing new information on their B3 model based on the F30 3 Series sedan. The third-generation B3 will debut next month and it is powered by an upgraded 3.0 liter turbocharged engine that delivers 301 kW (410 hp) from 5,500 RPM until redline 7,000 RPM.

The Bi-Turbo engine is mated to a new ZF eight-speed automatic.

It takes the ALPINA B3 only 4 seconds to run from standstill to 62 mph. The B3 not only brings more power and torque than its predecessor, but it is also more efficient by approximately 20 percent, or 7.9 liter per 100 km.

More details will be revealed next month in Geneva.