Mercedes-Benz confirmed yesterday the launch of a new model: A45 AMG. The compact and fast hatch will make its debut next month at the 2013 Geneva Motor Show and is set to take on the BMW M135i and Audi S3 Sportback.

Based on the A-Class hatchback, the A45 is engineered by the AMG division to include numerous performance, handling and styling upgrades. The one thing that impresses us is the powerplant found under the hood: a 2.0 liter turbocharged inline-four cylinder which produces 360 horsepower and 332 lb-ft of torque. This engine is paired to a seven-speed AMG dual-clutch transmission and power is sent to the ground using 4Matic all-wheel drive. 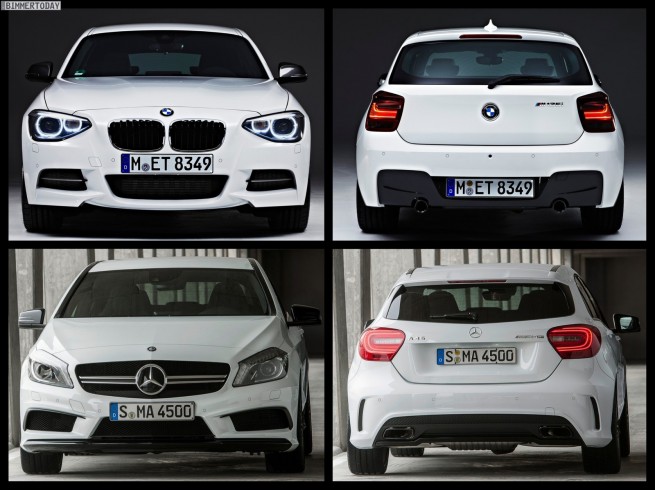 For years BMWBLOG has been comparing new models that join the premium segment and we made no exception today. Below, you have a visual comparison of the BMW M135i and Mercedes-Benz A45 AMG. While we can’t speak yet on the real life performance of the two vehicles, we can at least give us our opinion on the design of the two cars, so let us know in the comments below which one you like best.

12 responses to “Photo Comparison: Mercedes-Benz A45 AMG vs BMW M135i”