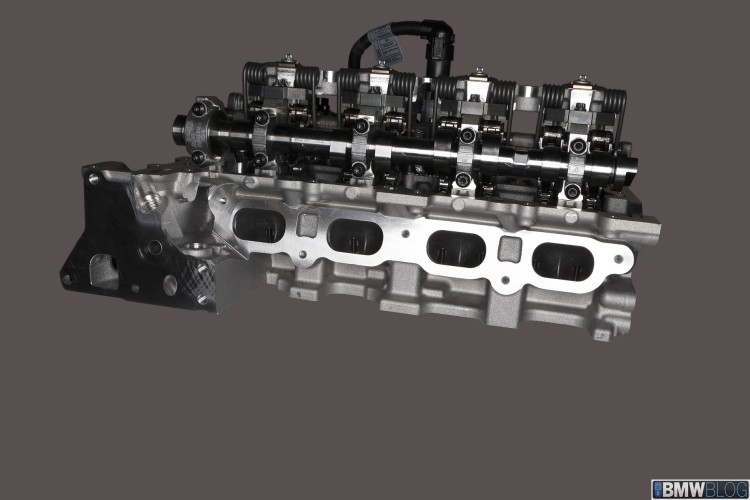 Since the spring of 2007, the BMW Group has had the most comprehensive concept for the consistent reduction of fuel consumption and emissions at its disposal – the Efficient Dynamics development strategy. Efficient Dynamics is an integral part of all areas of vehicle development and is a guiding principle. This includes fuel-efficient petrol and diesel engines, transmissions delivering a particularly high level of efficiency, ancillary equipment controlled on an “as needed” basis, intelligent lightweight engineering and sophisticated aerodynamics, as well as the continuing development of the BMW ActiveHybrid technology and innovative concepts for electromobility. 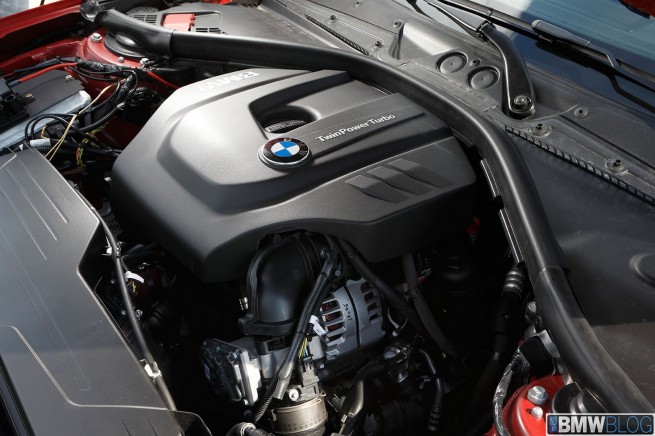 As a technology of the future, the BMW Group is relentlessly driving forward the electrification of its vehicles, and yet still sees great potential for conventional engines. Therefore, in the medium term, the internal combustion engine will remain the BMW Group’s underlying technology and will thus power both existing and future series of volume production vehicles as the standard drive unit. Today, the BMW Group already has at its disposal a high-tech concept in the form of TwinPower Turbo technology. Building upon this, the BMW Group developed a completely new family of engines, to even more effectively take advantage of this approach and to create an unprecedented degree of commonality. The market launch of further advanced drive units will take place the coming year. The first member of this new generation of internal combustion engines will be an advanced three-cylinder unit. 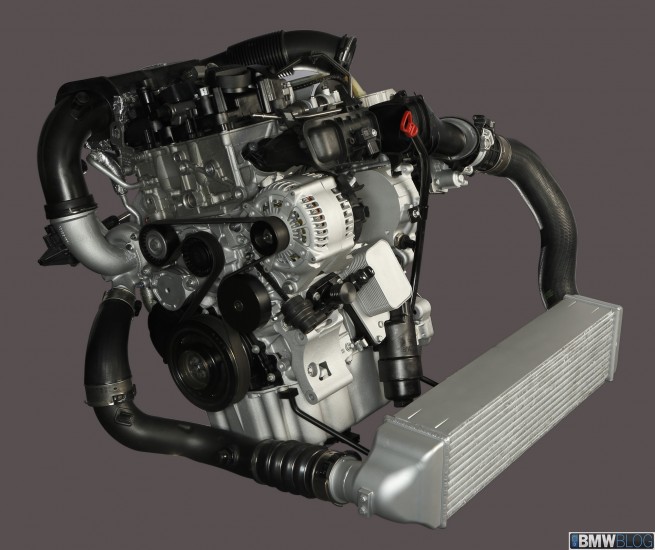 BMW TwinPower Turbo technology, which today is already fitted to many petrol and diesel engines and which in the course of time will be available for all new engines, occupies a key position in the on-going endeavour to reduce both consumption and emissions. The term “TwinPower” designates the compelling combination of variable load control on the one hand and the latest fuel injection technology on the other. The intelligent, regulating technology modules include the (double) Vanos infinitely variable camshaft control system, the VALVETRONIC variable valve timing system and the variable turbine geometry of the diesel turbochargers. These are complemented by the High Precision Injection direct fuel injection system for petrol engines and the Common Rail direct injection system for diesel units. The third element of this high technology concept consists of turbo-charging. This allows a BMW TwinPower Turbo engine to be charged with a single turbocharger, dual turbochargers, a twin scroll turbocharger or with a triple turbo unit. An essential feature of these engines however, is the VALVETRONIC throttle-free load control system, which sets BMW TwinPower Turbo technology conspicuously ahead of its competitors. Unlike a conventional load control system using a throttle valve, VALVETRONIC responds to the driver’s power requirement by varying the valve lift, which results in systemic efficiency gains.

VALVETRONIC: fully variable valve lift on the intake side.

VALVETRONIC, the variable valve control system, is an innovative technology for the throttle-free load control of petrol engines, which the BMW Group has deployed to great advantage since 2001. This system, available exclusively from BMW, has been continuously improved and represents the perfect solution for the engine modules of the future. The latest generation of the VALVETRONIC system employs a high-precision mechanism with an eccentric shaft to vary the valve lift on the intake side. Since the change in valve lift is infinitely variable, the usual throttle valve can be dispensed with during normal operation of the engine. The result: because the regulation of the required air mass takes place within the engine itself, the throttle losses in the charge cycle and thus the consumption can be reduced to a minimum. The engine is now more responsive, since in contrast to engines with conventional load control, throttle-free operation ensures that ambient pressure is nearly always present at the intake valves and thus the time necessary for filling the intake manifold with fresh air is eliminated when the driver needs more power quickly. 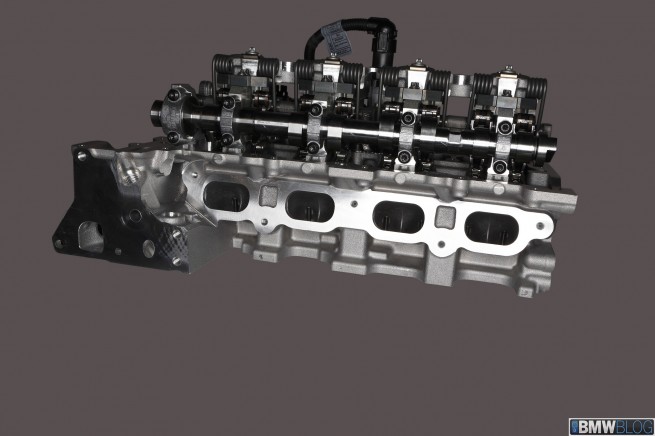 A proven concept with a great future: don’t switch it off – dim it.

In stark contrast to other approaches, the VALVETRONIC system delivers gains in efficiency, including improved engine response and better engine torque development over the entire rpm range of the engine. The throttle-free load control system works like a dimmer, affecting all cylinders equally; the engine continues to run smoothly and its acoustic properties remain unchanged, something which cannot be said of cylinder deactivation. “Dimming instead of switching off” results in minimum fuel consumption and emission levels, while maximum dynamics, matchless comfort and sophisticated power delivery are achieved. In addition, this proprietary
BMW technology can be used in engines of different sizes and power. In a nutshell, these new engine modules put the BMW Group in a position to configure engines of an optimal size, providing an ideal solution for each individual application.

The new family of engines with the 1.5 litre BMW TwinPower Turbo power unit.

Since BMW TwinPower Turbo technology can be integrated into engines of all capacities and any number of cylinders, it is the ideal system for the future Efficient Dynamics family of engines. One of the first members is a 1.5 litre BMW TwinPower Turbo engine. This compact in-line engine possesses all of the renowned characteristics which unite all BMW power units and is distinguished by a high degree of dynamism and efficiency. The characteristics typical of a three-cylinder engine are also much in evidence – high-revving characteristics, spontaneous responsiveness and a dynamic, sporty sound.

The 1.5 litre BMW TwinPower Turbo engine enjoys significantly reduced fuel consumption by virtue of its low internal friction. Due to the long ignition intervals, the charge cycle can be particularly well adapted to suit the needs of the driver, providing a high “low end torque”, as well as a rapid response. To this end, the new three-cylinder uses the latest generation of the High Precision Injection direct fuel injection system and the VALVETRONIC variable valve control system.

The “half of a six cylinder” runs remarkably smoothly.

The vibration characteristics are every bit as impressive as the unit’s lightweight and compact dimensions. In this respect, the three-cylinder engine shares a number of common features with the six-cylinder in-line engines – neither of them generates free inertial forces nor free moments of inertia. The three-cylinder engine is also free of first and second order inertial forces and the roll torque, which is very small compared to the six-cylinder engine, is completely eliminated by the use of a balance shaft. Thanks to its torsional vibration damper, which works on the principle of a centrifugal pendulum, the engine behaves immaculately even at low rpm, providing an extremely comfortable ride.

The three-cylinder sound – emotional and dynamic.

In addition to the high-revving characteristics and gratifying responsiveness, the emotional sound of the engine also makes an important contribution to the driving experience. Because the frequency of the sound of a three-cylinder engine increases 50 percent faster than that of a four-cylinder, the engine is perceived as being extremely vivacious and sporty.
The new family of engines in detail.

The forward-looking engine strategy of the BMW Group is the driving force behind lowering fuel consumption and CO2 emissions. Today, BMW TwinPower Turbo technology is used in petrol and diesel engines of various powers and capacities. With the introduction of the new Efficient Dynamics family of engines, this technology becomes the common characteristic of both types of engine, with three, four and six cylinders. Through the targeted development of additional components that can be used both for petrol and for diesel units, the BMW Group is steadily increasing the number of identical components within the family even further. In this way technical solutions in both current and future versions can be used on all of the engines, regardless of the number of cylinders, combustion method and power.

The basis of the new family of engines is a common design principle for in-line units. The basic engine is made up of optimized cylinder modules with capacities of 500 cc each, developed to the pinnacle of thermodynamic efficiency for use in a passenger vehicle. Consequently the new three-cylinder engine has a capacity of 1.5 litres, the four-cylinder unit is 2.0 litres and the six-cylinder is 3.0 litres. The power developed in each cylinder is between 30 and 55 kW (at 60 – 80 Nm) in the case of the petrol engine, while the diesel develops between 20 and 45 kW (at 75 – 110 Nm).
High degree of commonality between petrol and diesel engines.

The structural similarities between the petrol and diesel engines include the distance between cylinders, the aluminium crankcase, the balance shaft design, the arrangement of the timing chain, the layout of the cylinder head bolts and the high-quality coating on the cylinder bore surfaces. Overall, the number of identical parts used in engines powered by the same type of fuel climbs to 60 percent, while the level of structural similarities between petrol and diesel engines is around 40%. Even more benefits are provided by standardised interfaces. In addition to the identical engine mounting points, these are primarily the interfaces to the cooling circuit, the intake and exhaust manifolds and the heating and air conditioning systems. Compared to current models, the number of possible combinations in these areas has decreased by about half. Finally, all of the power units have the same “cold” intake and “hot” exhaust sides. This is why the three and four-cylinder engines in this new family are eminently suited to both longitudinal and transverse mounting in future BMW and MINI models.

With the new modular engine, the BMW Group will in future be able to build three, four and six-cylinder power units delivering different levels of performance, each perfectly matched to its respective vehicle. This results in larger volumes, leading to significant savings in both development and production. In addition, the high degree of commonality facilitates the development of additional engine versions, which can then be realised economically at short notice, even in relatively small numbers. For the first time, petrol and diesel engines belonging to this new range can be manufactured together, at the same time, in the BMW Group’s engine production facilities. In this way, even short-term fluctuations in demand or new market developments can be addressed flexibly, with great success.

The future is here.

The architecture for the new series of models and new engines has already been defined. With the BMW Group’s new Efficient Dynamics family of engines, it is also possible to provide for a wealth of new models of automobile in the coming years. Because theoretically, the new family of engines could provide ten ultramodern petrol and diesel engines with three, four or six cylinders, for vehicles with both longitudinal and transverse engine positions.