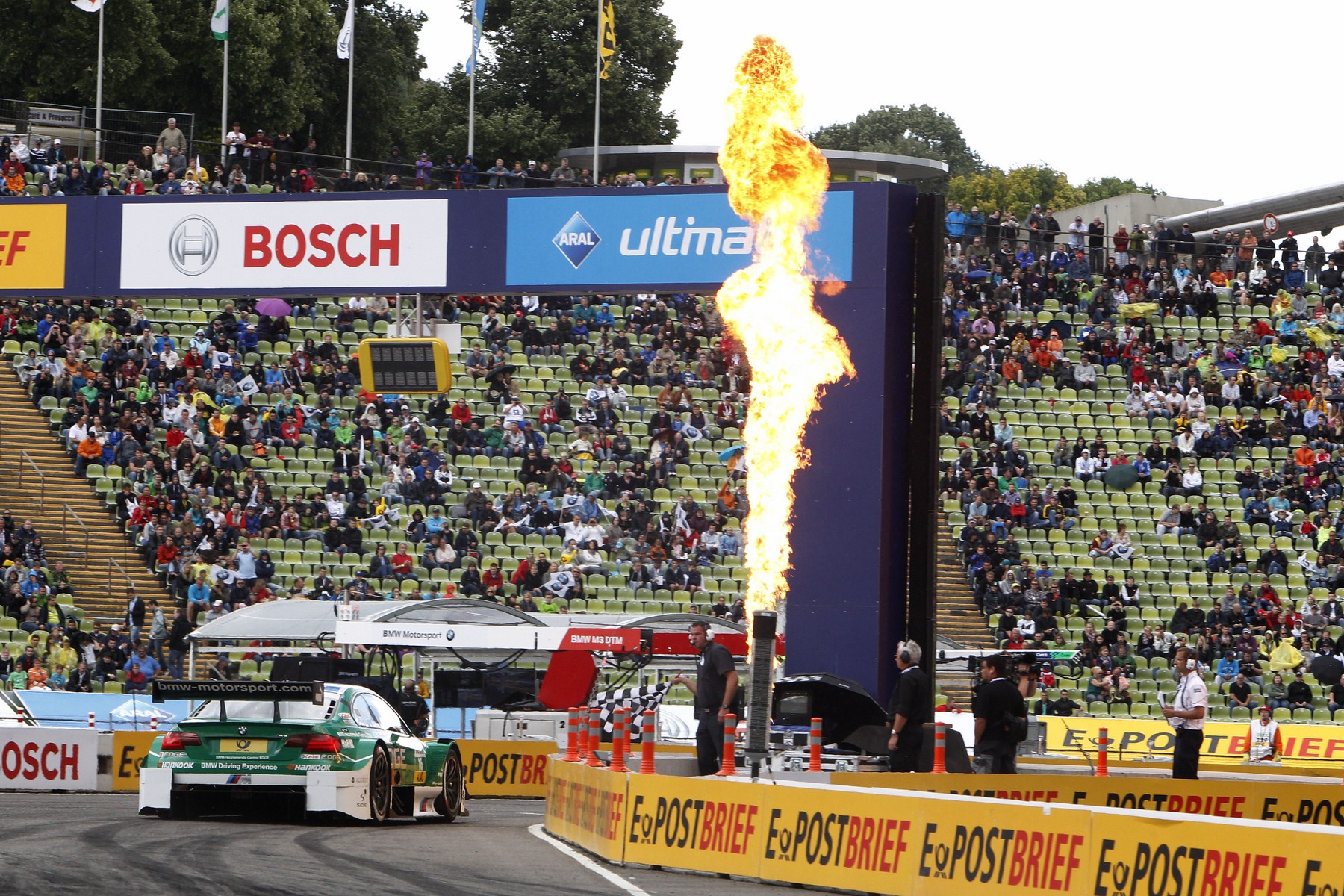 The DTM’s second visit to Munich (DE) saw Bruno Spengler (CA) prove once again that he is right at home on the tight, winding circuit in the Olympic Stadium: the BMW Team Schnitzer driver finished third in Sunday’s individual competition. Last year’s winner, this time at the wheel of his BMW Bank M3 DTM, came up against Jamie Green (GB) in the semi-final and led until just before the end of the race, when he locked his wheels and allowed the Mercedes driver to snatch victory. Mattias Ekström (SE, Audi) went on to defeat Green in the final.

Three BMW drivers were in action in the first round. Dirk Werner (DE) in the E-POSTBRIEF BMW M3 DTM lost out to Audi driver Rahel Frey (CH). Andy Priaulx (GB, Crowne Plaza Hotels BMW M3 DTM) drew the short straw against Felipe Albuquerque (PT, Audi). Both Werner and Priaulx were allocated the first of the two symmetrical 0.614-kilometre circuits, which had standing water on the exit of one of the corners following last night’s rain. Joey Hand (US) also lined up on this track at the wheel of his SAMSUNG BMW M3 DTM and crossed the finish line behind his opponent Roberto Mehri (ES, Mercedes). However, Mehri was given a time penalty after the race, meaning Hand progressed into the last sixteen. 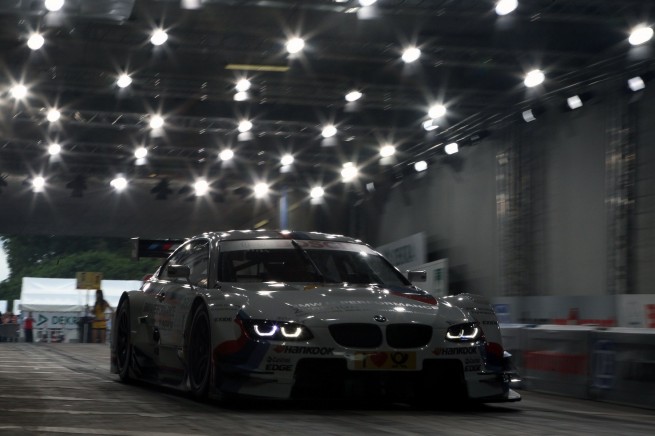 In the next round, the 33-year-old faced Ekström. After four laps, Hand came home 1.559 seconds behind the Audi driver to bid farewell to the competition. Prior to Hand’s race, defending DTM champion Martin Tomczyk (DE) in the BMW M Performance Parts M3 DTM had seen his first action in the individual competition and came through his second-round contest with Robert Wickens (CA, Mercedes). Augusto Farfus (BR, Castrol EDGE BMW M3 DTM) defeated Christian Vietoris (DE, Mercedes), while Spengler progressed to the quarter-finals courtesy of his win over Adrien Tambay (FR, Audi) as the rain started to fall.

With the competition down to the last eight drivers, it was time for the teams to enter the fray: after three laps on a wet track, each driver had to complete a pit stop before returning to the track for three more laps. Spengler and Farfus, who had driven together in Saturday’s team competition, found themselves going head to head, with Spengler gaining the upper hand. Tomczyk was involved in a thrilling duel with Ekström and missed out on a place in the semi-finals by just 0.090 seconds.

With the Show Event in the Olympic Stadium over, the BMW teams now have a short summer break before they return to action at the Nürburgring (DE) on 19th August, when points will once again be up for grabs in the drivers’, team and manufacturers’ competitions.

“Generally speaking it was a great event in our home city of Munich. Our drivers put on a great show for the fans. It was nice to see lots of BMW flags in the crowds. We had super support, particularly from the many BMW employees. We saw exactly the same in BMW Welt, which was extremely well visited over the weekend. Bruno Spengler was once again able to show the conditions in the stadium suit him. Third place is a good result. Whatever happens, our drivers certainly had fun, and you could see how determined they were to do well at this event. Everyone is now really looking forward to our next race at the Nürburgring, when we will be battling for points again.”

Bruno Spengler (car number 7, BMW Team Schnitzer, semi-final):
“It is a real shame I did not make it into the final. The conditions were not easy, as the track was gradually drying out as we were racing. Our team did a great job in the pit stop and I was leading the race. Then I braked a little bit too hard and lost time, allowing Jamie to come through and win. That was my mistake. Still, I hope the fans enjoyed themselves. It was certainly a nice experience for us drivers.”

“From inside the car it was not clear what the problem was during my pit stop in the quarter-final. The team then told me that the pit equipment had not worked properly. At that point I was a little behind, but a good pit stop would have given us a chance. Our package was working well, so it is a shame that I missed out on the semi-final.”

“That was a really close race against Mattias Ekström. Ultimately I only just missed out. However, I thought it only right that I should thank the many fans and BMW employees here for their support with a few donuts. Like yesterday, the atmosphere was superb today and we had great fun. I am now looking forward to the next challenge at the Nürburgring.”

“The event in the Olympic Stadium is definitely very special. I have never experienced one-on-one duels like that on a racetrack. It was absolutely great fun. That is a real event for the fans, just a great show. They could get closer to the teams and drivers here than at any other race this season.”

“My first two laps were good. Then I made a mistake braking and lost valuable time. It was a close race and Felipe Albuquerque drove very well. The other track was definitely a bit faster this morning. However, that is part and parcel of a stadium event. I am disappointed. There may not be any points up for grabs, but it is about pride.”

Dirk Werner (car number 8, BMW Team Schnitzer, round one):
“It is a shame I lost my duel in the first round. I am quite frustrated. I made a good start, but it was really slippery on the side of the track I was racing on. There was still some water on the track in the fourth corner, which made it quite difficult to control the car in the turn. Despite that it was great fun to drive in front of so many fans and BMW employees in the Olympic Stadium. It is a great event.” 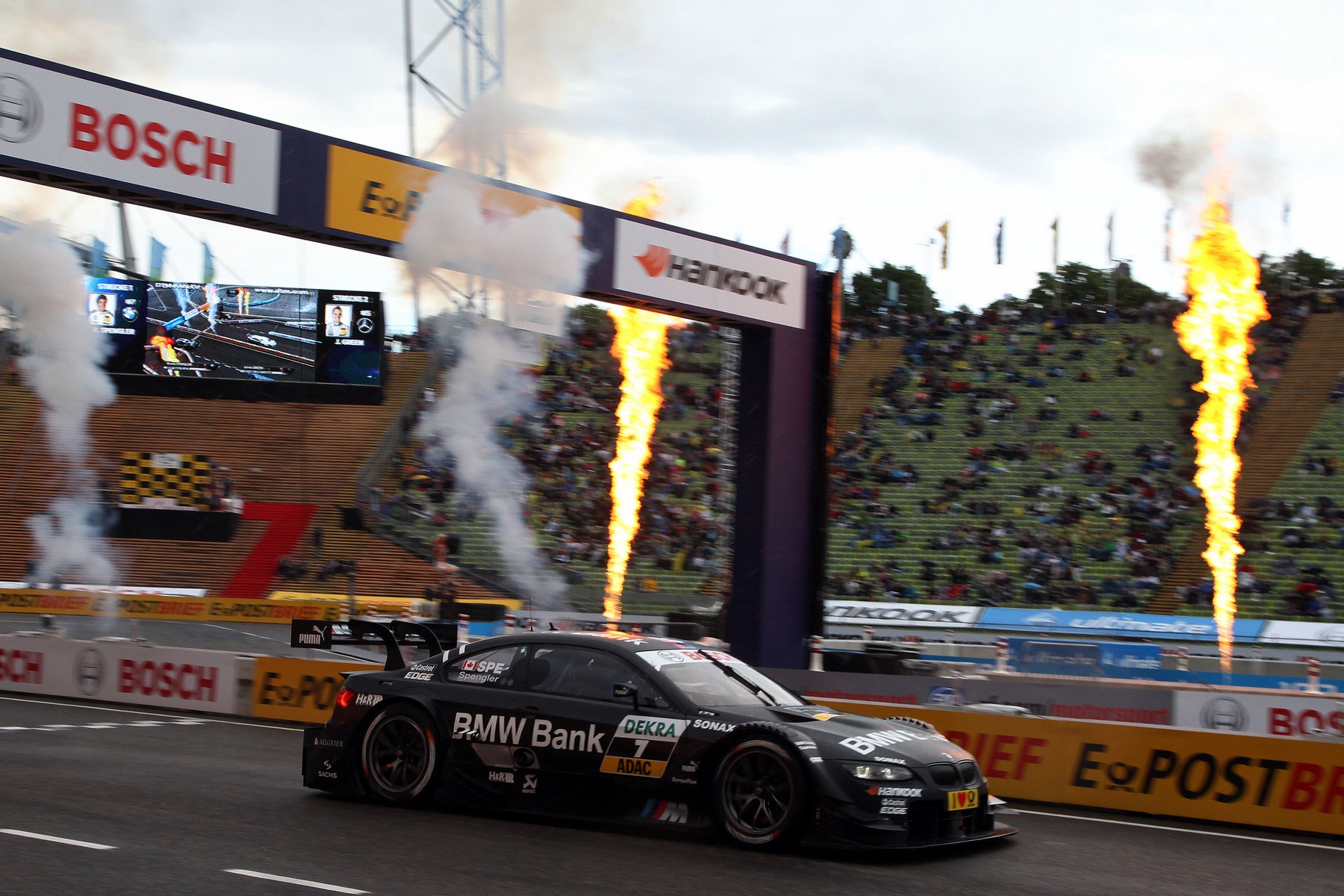 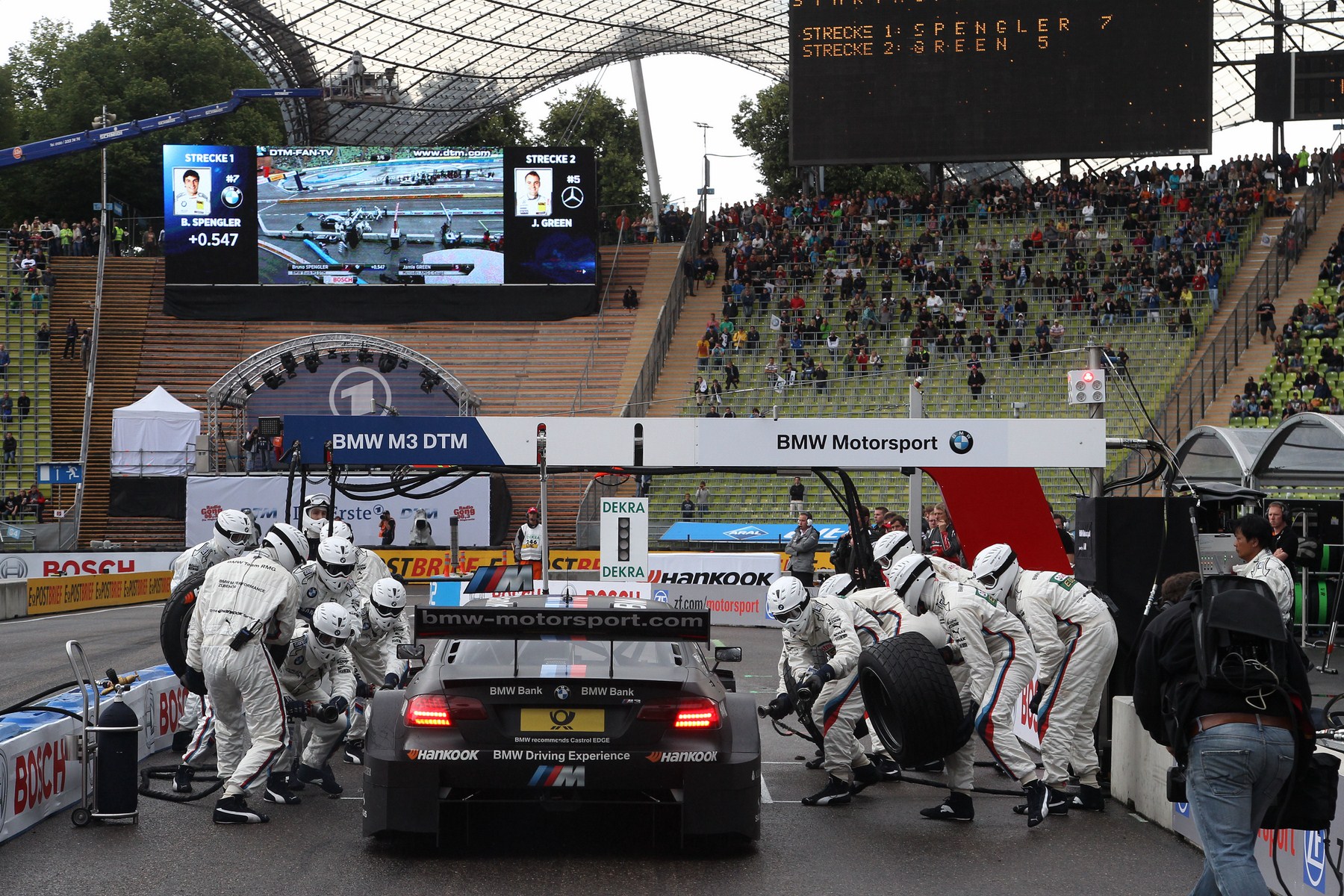 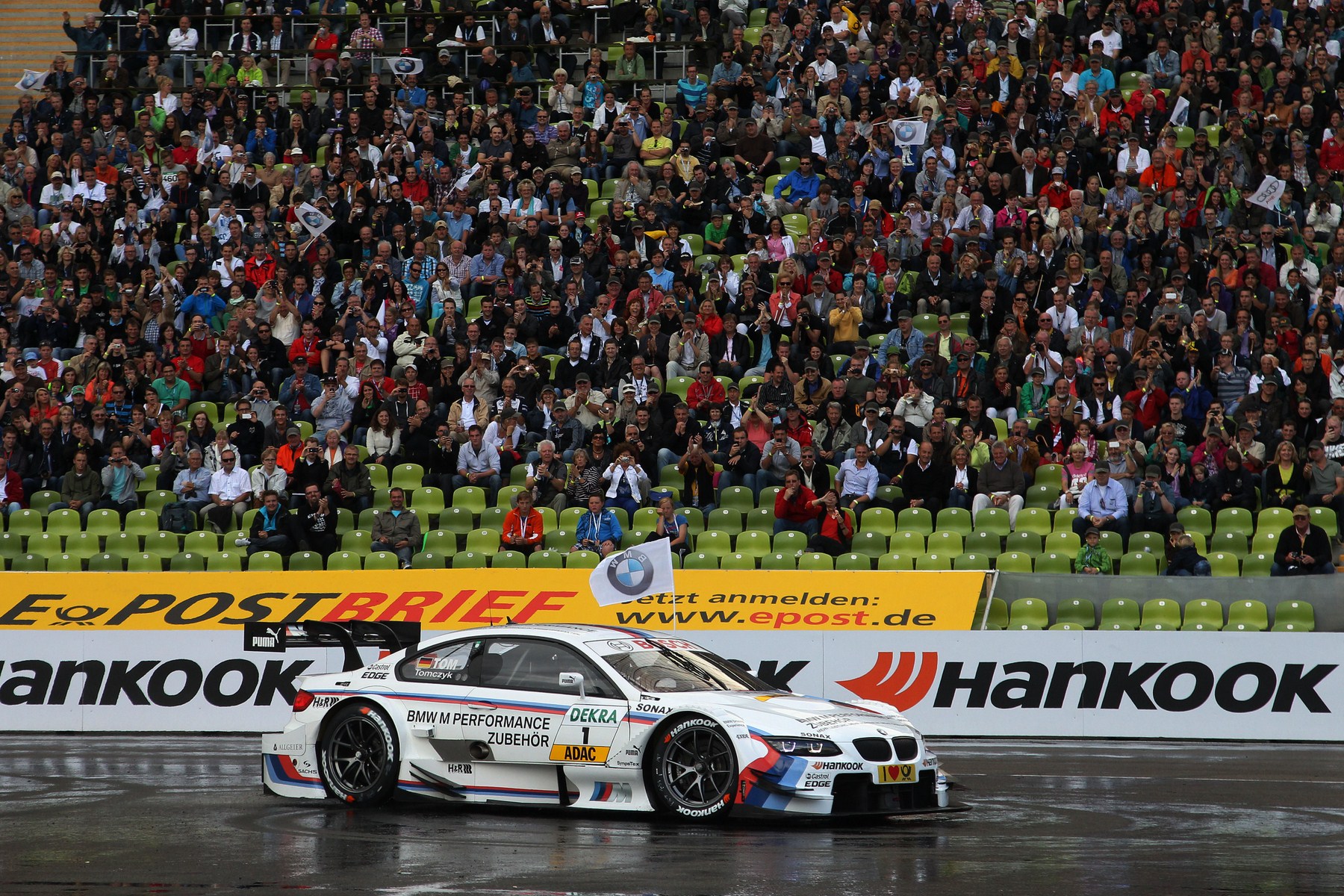 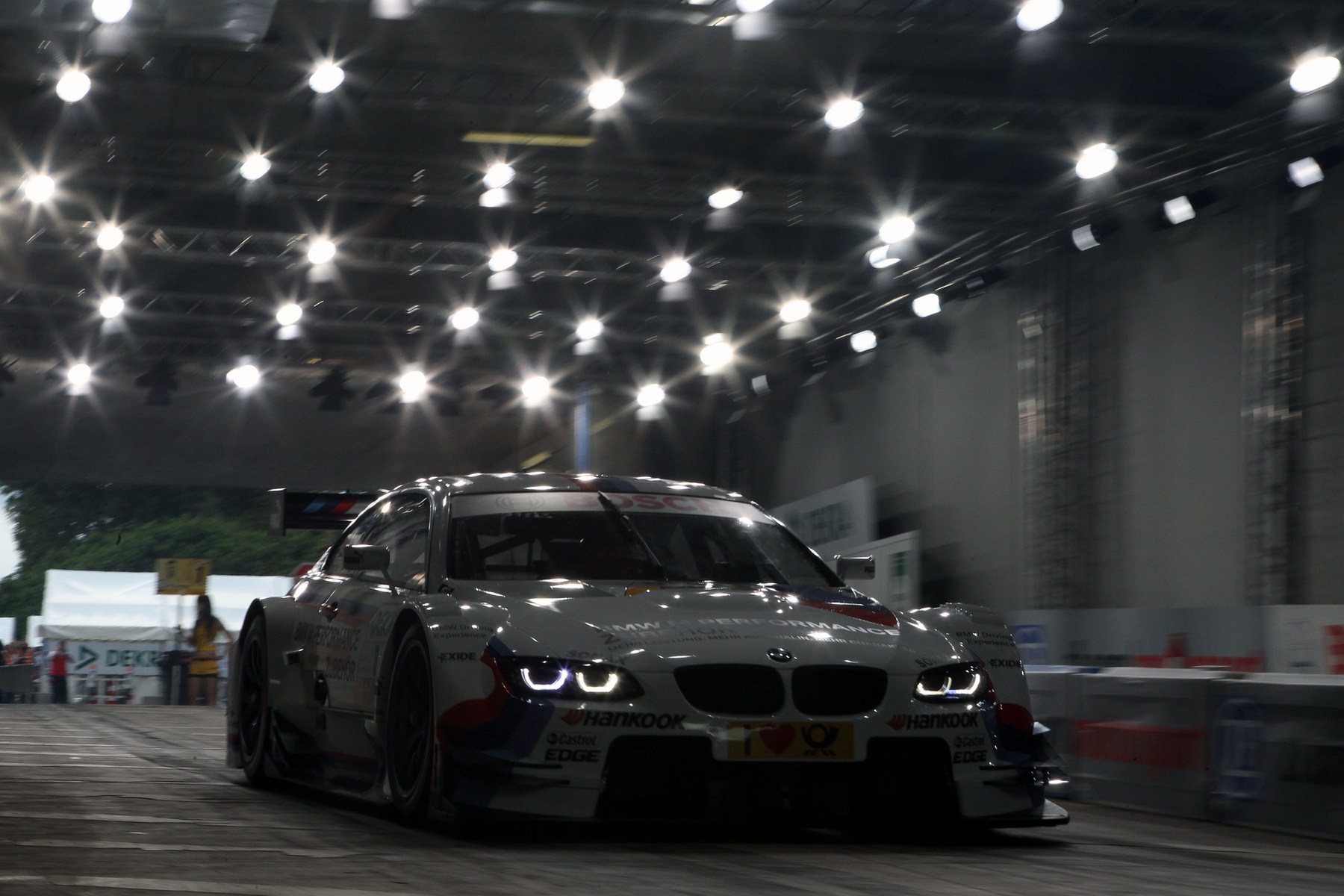