Opposite Lock: The 5 GT Gives Birth

Some time has gone by since the launch of the BMW 5 Gran Turismo. Built upon the 7 series’ platform, the car was modified to look like a 5 and drive like a 7 with the storage space and utility of an X5. Sounds good on paper.

In reality, the car’s proportions strained many eyes, and underwhelming sales figures were the result. I accept that I see things a little differently in the automotive world – I am, in some way, an outcast of public opinion. I like the 5GT. I drove one for a week, and was deeply impressed. Allow me to explain my adoration.

First off, let’s tackle the highly subjective topic of looks. I admit it’s not one of the brand’s most attractive vehicles – not by a long shot – but in the right colour (black) with the M sport pack affixed, it’s still a head turner. At least it turned my head when one passed me downtown Toronto. In real life, in this color and package, it was a very muscular, focused looking car. It’s obvious that it has junk in the trunk. But some people like that. And it is, after all, functional and very practical for those who need to carry gear on occasion. 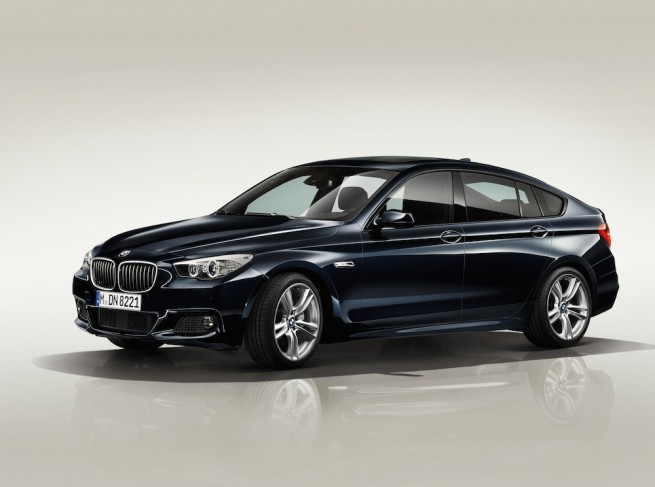 True, you shouldn’t need to dress your car (or significant other) in black in order to find them attractive. But there is much more to this car than exterior looks, and since you’ll be spending most of your time inside the vehicle, the 5GT goes on to win points here. The interior is brilliant. It’s airy, open, relaxed, and luxurious. The sound system is top notch, the interior appointments, technology and materials are on par with the flagship 6 and 7 series cars. The cabin of the 5GT was a place I began to call home after only a few days with the car. 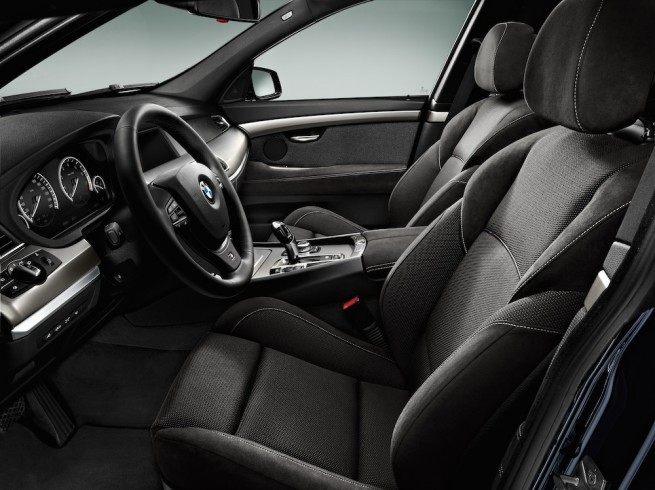 What defines a BMW more than any other attribute is its driving dynamics. A BMW must be able to hold its own through a corner. Knowing the negative press that the 5GT had been getting, I thought it appropriate to prove its metal on the racetrack, and that’s exactly what I did. I didn’t know what to expect at the time. For all I knew, the 5GT would fall flat on its face, embarrassing itself with wanton understeer, wobbly chassis movements, and underpowered brakes. 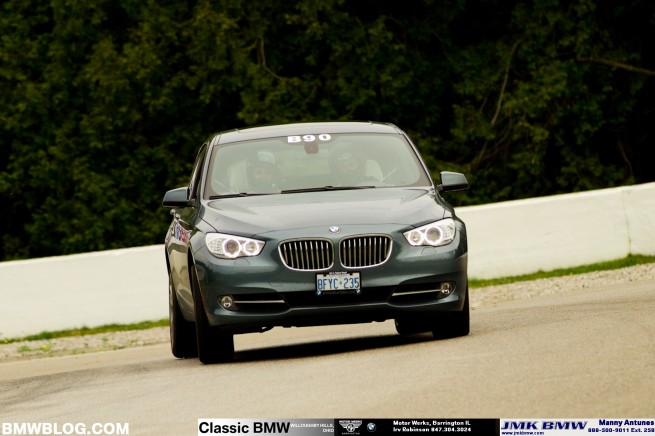 On the fast sweepers of a retired Formula 1 track, BMW’s 5GT made a believer out of me. That I could have a family of 5 tucked in behind me along with a 10-speed and a week’s groceries was irrelevant once I crossed the painted line of pit-out. If I ever have the chance to track the 5GT again, I’ll be sure to have baby-seats strapped into the rear seats (preferably with plastic babies, not the real kind) just to further humiliate the proper sports car drivers I pass. Yes, Mosport raceway is a high speed circuit that favors engine power, but it also demands excellent chassis dynamics and grip in order to press on through its high speed corners. On the straights the 5GT’s 400 hp devoured an array of sports cars, and it was not caught and passed in the corners. What surprised me most was the 5GT’s neutral handling and willingness to turn in. Yes, some understeer was still dialed in, but much less than you’d find on, say, a 135i. The brakes also impressed with very little fade after hard lapping. Bottom line: the 5GT will only look silly at the racetrack until you start driving it. 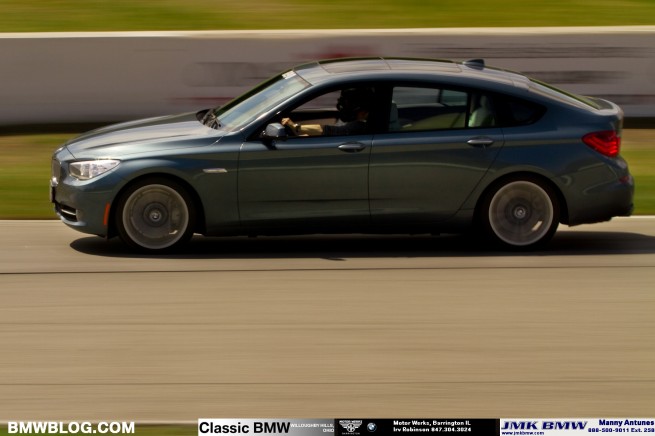 So the 5GT can look the part in the right colour combo (to some eyes anyway) and deliver serious speed and driving thrills should you choose to unleash it on a back road or local racetrack. It will caudal you in the finest quality interior and allow you to carry plenty of cargo in the boot, to boot. It’s also cheaper than the 7 series, despite similar quality, luxury, dynamics and technology. I’m not seeing many down sides.

We’ve heard mixed feedback from BMW regarding the 5GT since its launch. At times, the feedback has been very positive, other times there has been an undercurrent of disappointment, namely in sales figures, and we’re not sure whether or not we will see a second generation of the 5GT. We hope so, but this time, wearing a sharper suit. We would mark the Audi A7 as the benchmark head-turner in this segment. It’s flat-out gorgeous from any angle and has earned rave reviews thus far – also busting the sales quagmire of the segment creating 5GT. 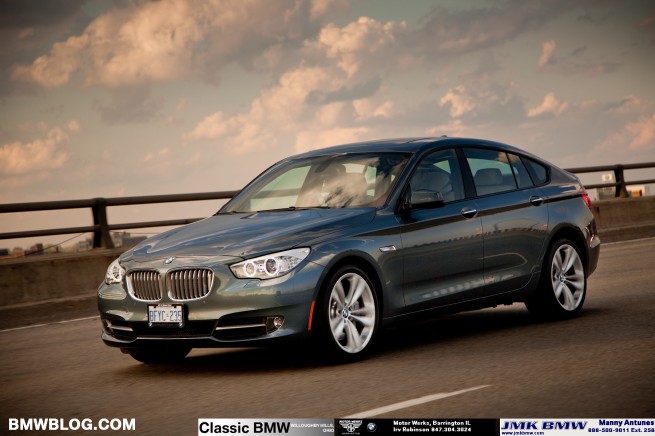 Not long ago, we noticed a baby-bump on the 5GT, right around the rear three quarter panel. Turns out the 5GT is birthing a 3GT. This leaves us with more questions than answers, but we’ll tell you what we know.

The 3GT will launch around March 2013, adding yet another variant to the 3 series for sale across most markets. Expect a price jump above the standard 3er, but not by a large margin. The 3GT will be based on the F30 3 series platform, but will be extended in length to allow the same trunk space and more legroom than its 5 series big brother. It will also ride higher than its 3 series sibling, allowing for easier ingress and egress.

In the looks department, expect a low-slung roof leading to a much sexier rump, described as a combo between a touring sedan and shooting brake concept. The low-slung roofline in combination with a high belt line will squeeze the windows and create the impression of a longer, sleeker car. We’re hoping that, without plagiarizing, the 3GT will be a worthy competitor to the A7 in the looks department – and we’re confident that with its perfect balance and rear wheel drive, it will destroy the Audi dynamically.

The 3GT should go on to offer exceptional versatility and practicality without making the step to an SUV. In a sense, this new “Progressive Activity Coupe” is a station wagon with a sexy name and sexy looks. It will put the cool in parenthood. Or allow folks who need near-SUV space and utility to skip the fuel consumption and emissions associated with a larger, boxier SUV.

Until we see and drive the final production version of the 3GT, we can’t pass any judgment. Conceptually, the apple falls not far from the 5GT tree. And conceptually, we like it.

For a full review of BMW’s 5GT, click here. To see the new 3GT prototype in action, click here.

12 responses to “Opposite Lock: The 5 GT Gives Birth”