Home » Opposite Lock: DSC OFF

Dynamic Stability Control, as BMW brethren know it, is a complex electro-mechanical system that steps in to control the direction of a car if the system detects loss of control. There are many examples of this technology across automakers, each with their own unique and often overstated acronym. Like any other technology, the quality of the system varies across automakers, but generally speaking, they all do a good job of correcting for loss of control. In fact, these systems have been found so reliable and consistent in reducing automotive collisions that they are now required by law in some countries.

In brief, here is how it works: A central control unit continuously takes in information from various sensors around the car. Factors such as wheel speed, throttle or brake position and steering wheel position are used to determine the directional stability of the car. If the system detects excessive yaw rates (oversteer) or insufficient yaw rates (understeer), the control unit will fire out electronic orders to adjust ignition or fueling and grab individual brake discs at any of the four corners to bring the car back onto its intended course. DSC really is an amazing piece of engineering, and in practice it is quite impressive. You can literally throw a car into a corner on a slippery surface, and watch as the system sorts things out.

This begs the question: how on earth did we survive a single car ride before the invent of Dynamic Stability Control? The answer is as simple as the question is stupid – drivers used to apply the tenets of car control to either prevent, or correct for a loss of traction at the front or rear wheels (understeer or oversteer). Whereas cars are beginning to drive themselves, there was a time not so long ago when drivers drove their cars.

All play, no work makes Jack a lazy boy, so I signed up for eight hours of volunteer flag marshaling and standby medic duties at a track event on Sunday. Normally behind the wheel, I found it a unique and interesting experience to watch things from the sidelines. It was exeedingly easy to see when a car was about to lose control, whether the driver was reacting appropriately and whether or not he would survive another lap before being passed – or spinning off the track altogether. This experience was, in fact, my inspiration for writing this edition of Opposite Lock, because the topic of DSC and whether or not to turn it off – particularly on track days – is worth discussing.

Let me be frank: driving a sports car on the racetrack while keeping DSC on is a lot like having sex wearing a condom. It’s still great, a lot of fun, but you’re missing a certain intimacy with the car. There is a safety layer that is isolating you slightly from the experience. Driving at the limit with DSC off will land you with the munchies and in need of a smoke. Of course, such untamed indulgence comes with more risk – I’m talking of crashes not children. And thus, whilst driving with DSC off you must be ever mindful and respectful of the weighty responsibility you have behind the wheel – the very welfare of your car and your personal safety depends on it.

Ironically, I tend to feel safer driving at the limit with DSC off. This is not proof of my insanity (there’s plenty of that elsewhere); there is actually a logical thought process behind this. When pushing to the limit with DSC on, the computer system is constantly reacting, reining in the action and adjusting for the attitude of the car, while you give more basic, large inputs; the finer corrections are made by DSC. What can result is a false sense of security. As you drive faster and deeper into corners, you continue to build speed, while aloof to the limits of grip and subtle dynamics of the car (because you haven’t felt them). When you finally get in too hot, you will not be aware of it until it’s too late. The car’s dashboard will light up like a Christmas tree, and you may even hear audible alerts (in some cars), but the fact remains you are in over your head and neither you nor the DSC can defy the laws of physics. You may well find yourself swinging from a tree, or sideways in a ditch, with roadside assistance on the line. 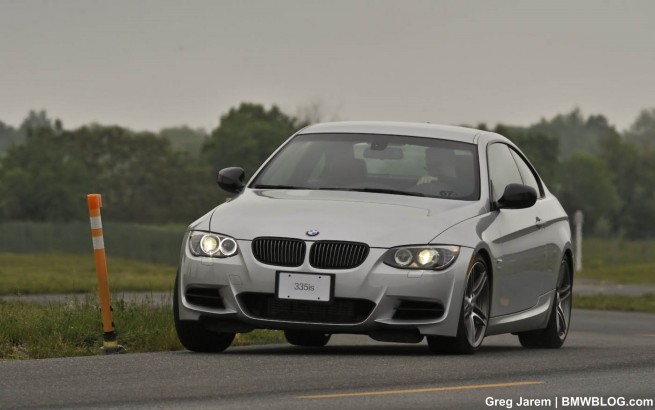 Long ago, I made a conscientious decision to always get a feel for the raw, mechanical soul of each car I test. As I approach the limits of grip, there are no surprises. Most cars predictably understeer, but can be coaxed into oversteer through various means. While prodding the limits, you get a feel for exactly what the chassis and suspension are doing. The contact patches travel straight through the seat and steering wheel, into your hands. The weight and handling balance of the car shows itself in full view. There are no tricks or surprises, no flashing lights or ringing bells: just man and machine.

If you’re pushing a car to its limits with DSC on, you will inevitably become a passenger once you’ve reached or exceeded those limits (or in most cars, even approached them), and that is precisely why I prefer driving at the limit with DSC off. You, the driver, are in control, and there will never be overlapping corrections while both you and the computer work to correct for over or understeer, trimming your line through a corner.

Consider another analogy: think of DSC as a form of training wheels. Initially, training wheels are helpful to get a feeling for your bicycle. You’ve graduated from the tricycle, but you’re not quite ready to tear up the back yard with handlebar streamers flowing in the wind. As a safety net, the training wheels allow you to gain the basic concepts and principles of riding a bicycle so that once they’re removed, you build on what you’ve learned – and I look at DSC much the same way. It’s allowed you to learn the racing line. It’s given you a basic feel for the car’s handling and where you’ll approach the limits – but until you’ve turned it off, you have not truly driven your car, in fact you’ve likely been driven by it. No one in the Tour de France is running training wheels and here’s a hint: it’s not for reasons of aerodynamics.

So, when do you turn it off? Only when you’re ready. Don’t be peer pressured into it – your friends will not pay your bill at the body shop. Grow as a driver until your comfort zone eclipses the button. When you’re feeling confident, seek out a safe, isolated place to push and prod your car to its limits. A closed off parking lot, skid pad, landing strip or racetrack would be ideal. Do not attempt to learn car control on public roads. Once the training wheels are off, you will be amazed at how steep your learning curve becomes.

Interestingly, when driving at the limit with DSC on, the rear brakes can be so heavily used by the system that they may even begin to smoke! Since the rear brakes are frequently squeezed to manipulate the vehicle, you will also see significantly increased brake wear if you drive with DSC on during at-the-limit driving. Yet another reason to turn it off, and learn the nuances of car control.

As an accomplished driver, you will find your fastest lap times with DSC off. When traversing deep snow, you will also find it important to turn DSC off, so that your drive wheels can clear snow and build momentum – something not possible with DSC on. Finally, when the punk kid with hat-on-sideways revs up beside you at the light – turn DSC off. You will have a great opportunity to teach him about the laws of physics and the limits of grip.

Tell us YOUR thoughts on DSC in the comment section below!

26 responses to “Opposite Lock: DSC OFF”