More safety in your everyday driving: The Left Turn Assistant

The left turn assistant is activated automatically in the BMW 5 Series test vehicle as soon as the car’s sensors detect that it is entering the left-turn lane and the car registers the driver’s wish to turn off. Recognition of the left-turn lane takes place on two levels.

The vehicle positioning function of the navigation system allows the location of the car to be fixed to within a metre at intersections. And a mono camera, comparable with standard cameras already in use, registers the turn-off lane markings and lane borders on the road. 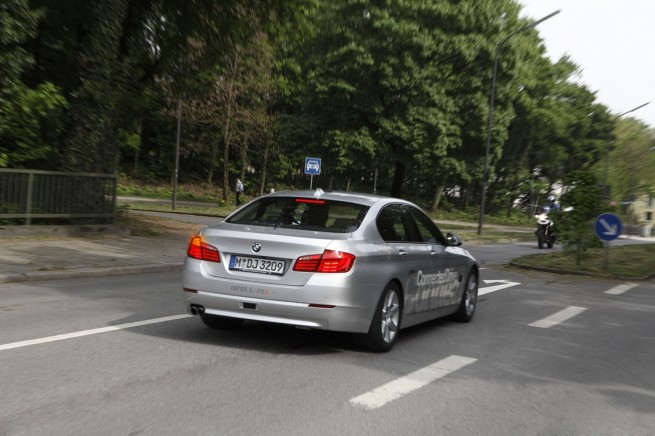 With the left turn assistant activated, three laser scanners in the front end of the car map the area up to 100 metres in front of the car. The laser scanners pick up not only cars and trucks, but also motorcycles. If the sensors detect vehicles approaching from the opposite direction but the car continues to move into the intersection, the left turn assistant activates an automatic braking input in a low speed range up to 10 km/h to prevent a collision. At the same time, a warning sound and relevant warning symbols in the instrument cluster and Head-Up Display advise the driver of the reason for the intervention. This automated action is triggered deliberately without a prior warning stage, as a rapid response is vital in this situation to prevent the car from moving into the intersection and presenting an obstacle to oncoming traffic. If the driver first had to react to a warning, the car would continue forward into the collision area and an accident would no longer be avoidable.

The left turn assistant is designed to work at speeds of up to 10 km/h. The automated braking function does not therefore trigger dramatic deceleration from high speed, but instead should be viewed as a system that prevents the car from moving off or continuing along its path. As soon as the driver engages the brakes himself, the braking input triggered by the left turn assistant is disengaged and the car is “released” again to continue normal driving. To maximise safety the driver can always override the left turn assistant. For example, if the driver needs to guide the car to the side of an intersection to clear the way for an emergency vehicle, he can do so at any time with a short dab of the accelerator. 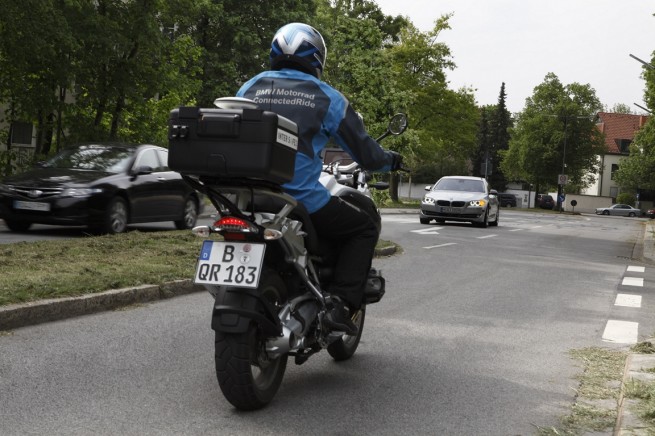 Car-to-x communication further improves safety.
The possibilities of vehicle-to-vehicle communication enhance the functionality of the left turn assistant. In addition to the laser scanners and camera, the BMW 5 Series Saloon can also be fitted with a WLAN car-to-x communication unit. This device not only increases the range of the vehicle recognition function to 250 metres, it also allows the system to detect the presence of concealed road users who also have the technology on board.

A second testing scenario with the left turn assistant shows the additional potential of equipping vehicles with this kind of interface. Here, the research car approaches a motorcycle fitted with car-to-x communication technology. The BMW Motorrad test bike is currently a BMW R 1200 GS. Again, the data provided by camera-aided image recognition and laser scanners allows the system to register the lane markings, the left-turn arrow and the distance to the centre line and stop lines (if these are present). When the driver activates one of the turn signal indicators, the car detects that the driver wants to turn off to the left and the assistance system is activated.

“The car and the motorcycle communicate with one another via the car-to-x interfaces as the motorcycle approaches. The car and motorcycle exchange information on the type of vehicle, its position and speed, as well as dynamic data such as its current steering angle and whether the indicators are activated,” explains Udo Rietschel, development engineer in the BMW Group Research and Technology’s left turn assistant project. The motorcycle then uses this data to detect that the car driver wants to turn off to the left. On the basis of the data exchanged between the car and motorcycle an algorithm then calculates their trajectories and identifies whether a collision is likely. In critical situations the motorcycle increases its conspicuity to warn the car driver. The level of collision risk is assessed and various measures taken accordingly; the motorcycle’s headlight is adjusted gradually, its strength increased and the flashlights and LEDs positioned on the sides of the bike and on its mirrors are activated to create a broader silhouette. If there is an acute risk of collision, the motorcycle’s horn also sounds. If the car continues into the intersection regardless, the left turn assistant brakes the car automatically to a standstill. Here again, a warning sound and relevant warnings in the instrument cluster and Head-Up Display indicate to the driver during and after the full braking manoeuvre why the car has been braked.

Improved safety at intersections – INTERSAFE 2.
Since 2008 a consortium of 11 European carmakers, suppliers and research institutes – including BMW Group Research and Technology, NEC Europe Ltd. Network Laboratories, SWARCO TRAFFIC SYSTEMS GMBH, Volvo Technology (truck division) and Volkswagen AG – have been working together on a research project to develop interactive driver assistance systems which further improve safety at road junctions. INTERSAFE 2 builds on the results of the PReVENT (INTERSAFE) project, the consortium partners continuing the development of the intelligent systems towards the goal of everyday usability. Around €3.8 million of the total €6.5 million budget for the project was provided by the EU.

The premiere of the left turn assistant will take place as part of the INTERSAFE 2 Final Event on 17 and 18 May at a closed-off intersection in Wolfsburg. The premiere will therefore be held in a real-life environment, rather than under test conditions, as is usually the case. 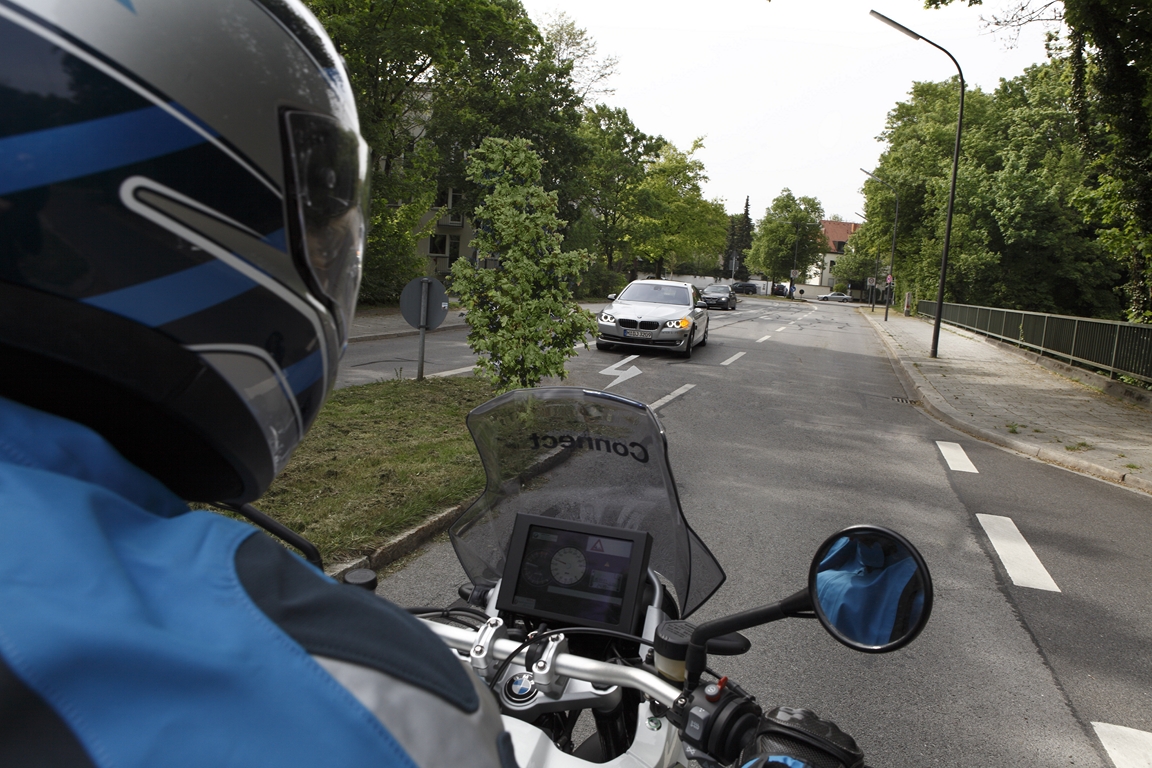 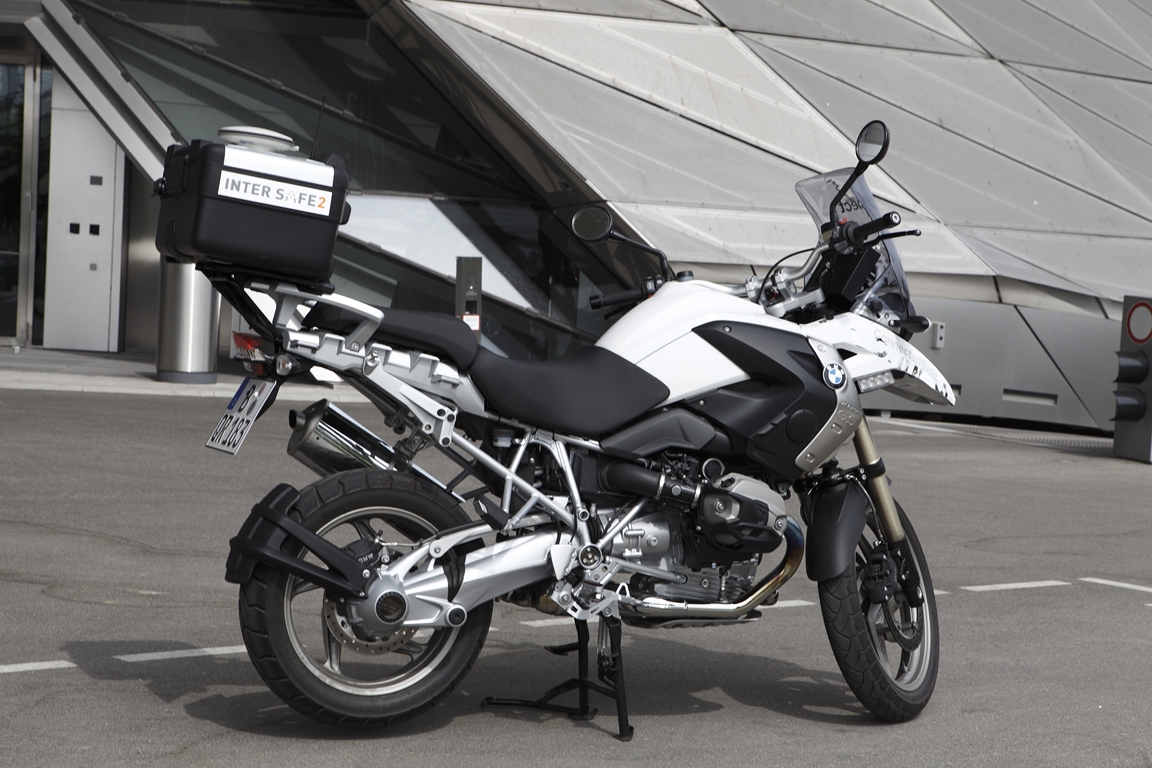 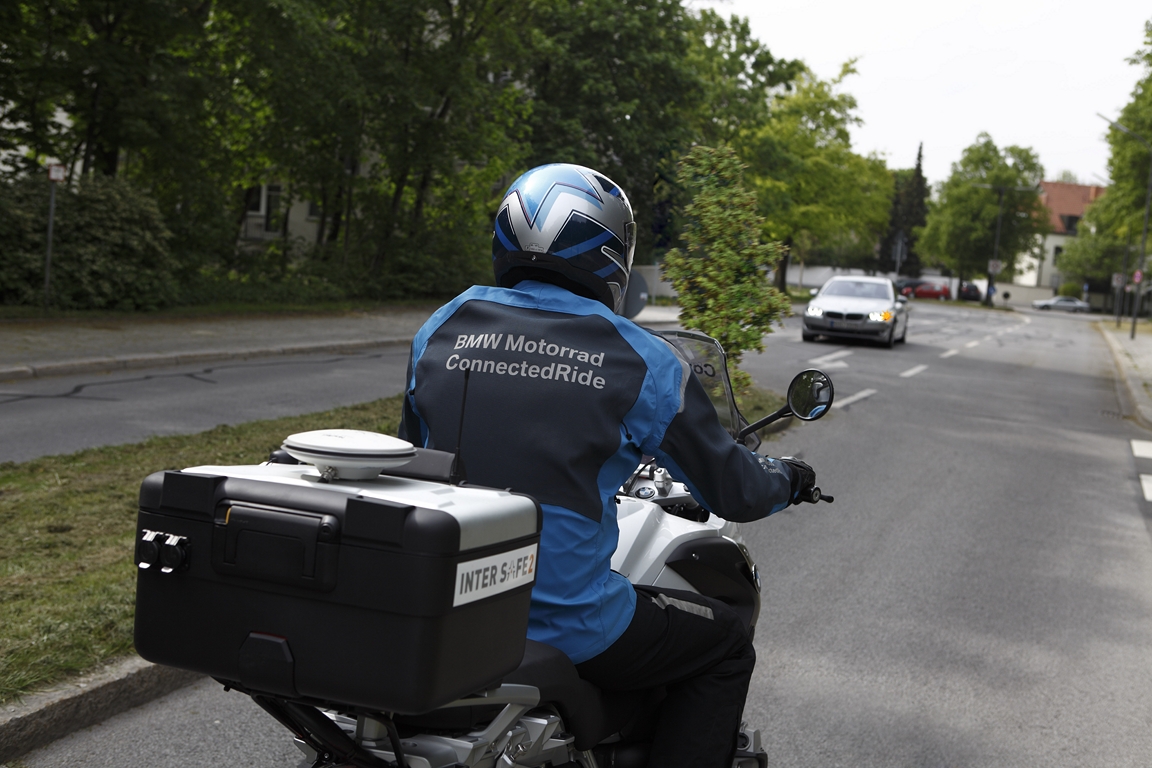 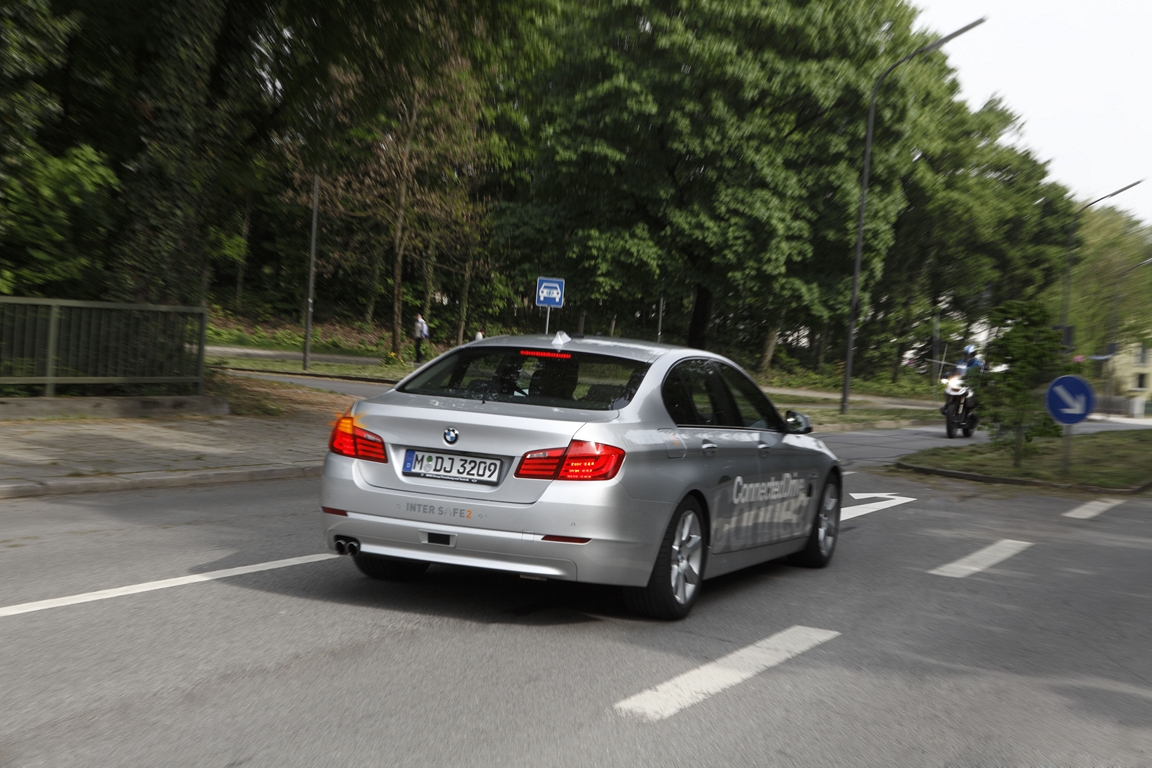 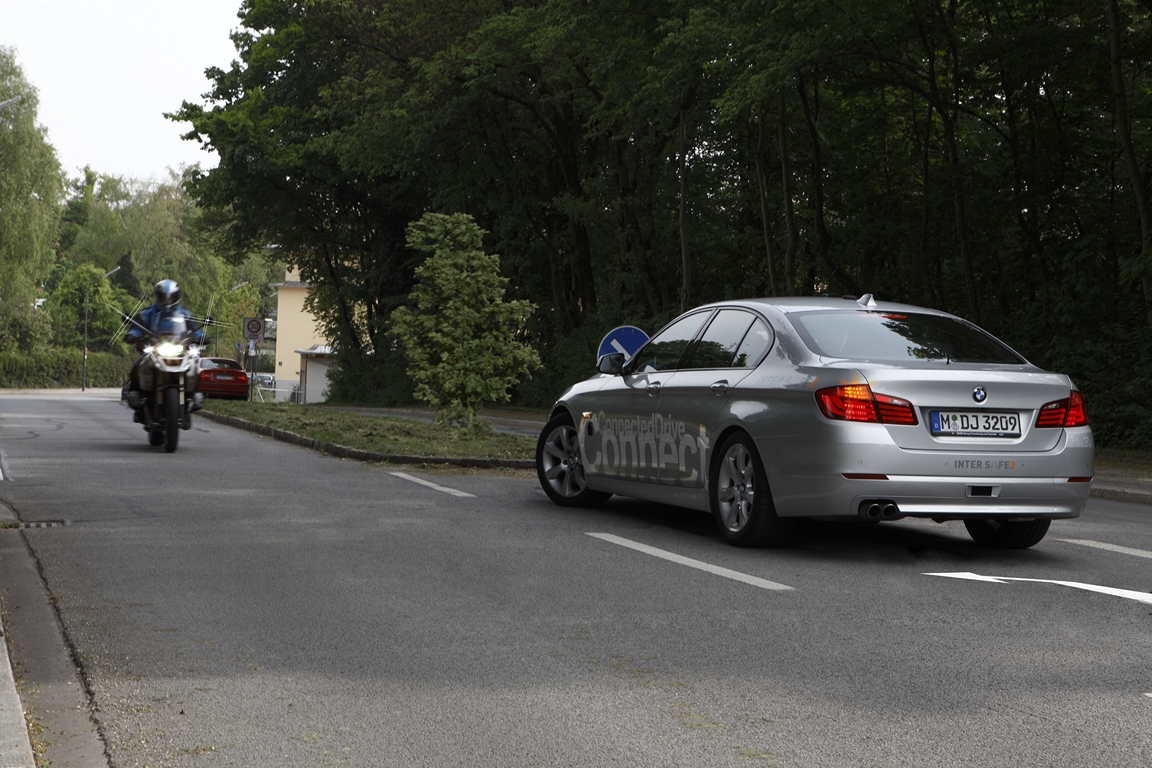 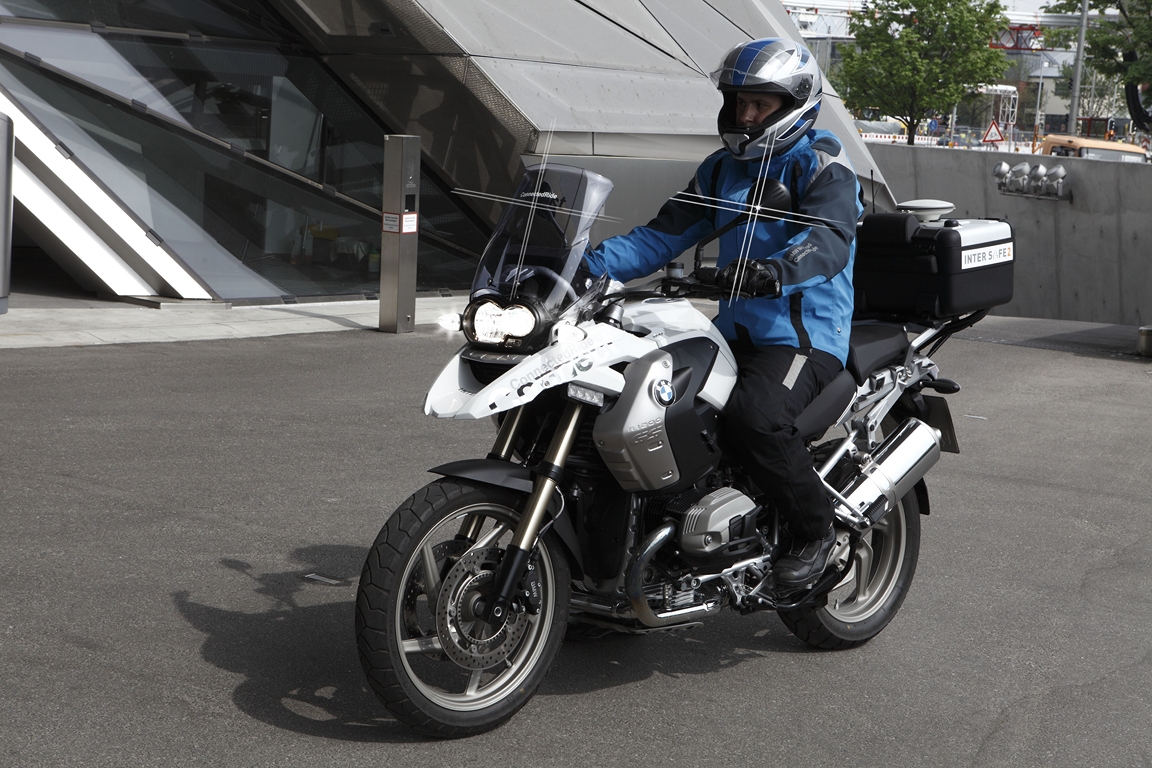 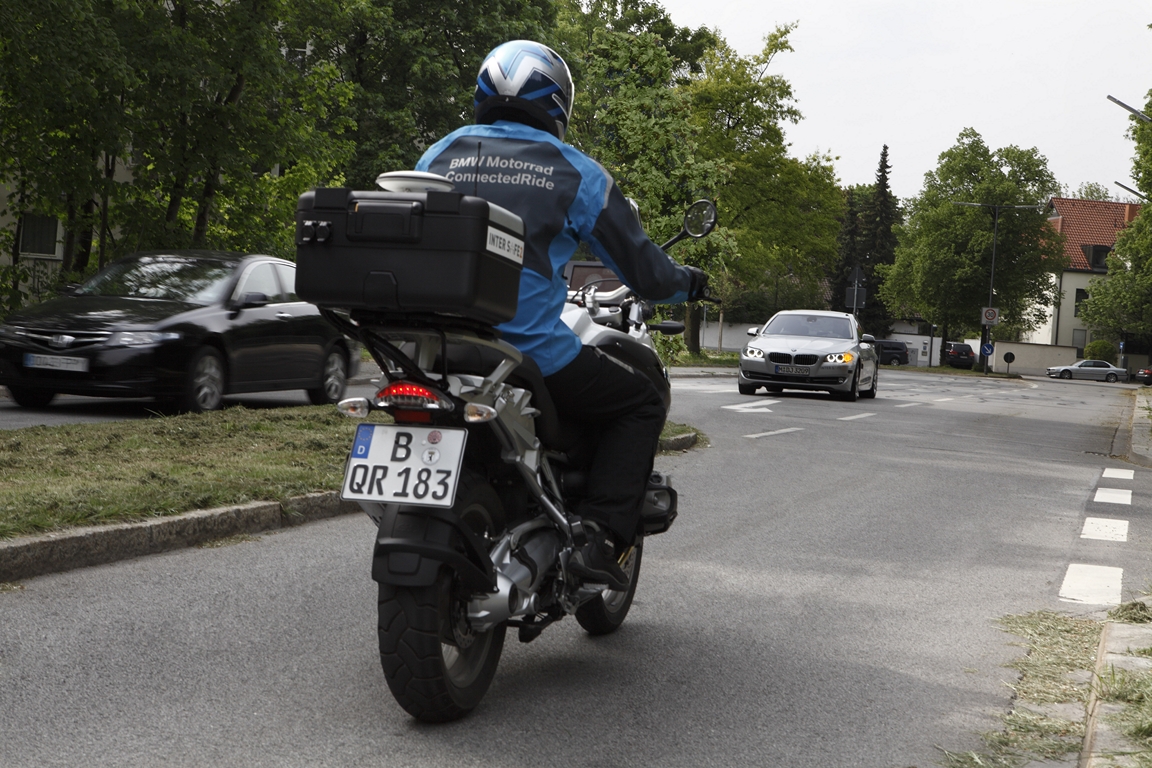