BMW Guggenheim Lab to Launch in New York in August 2011 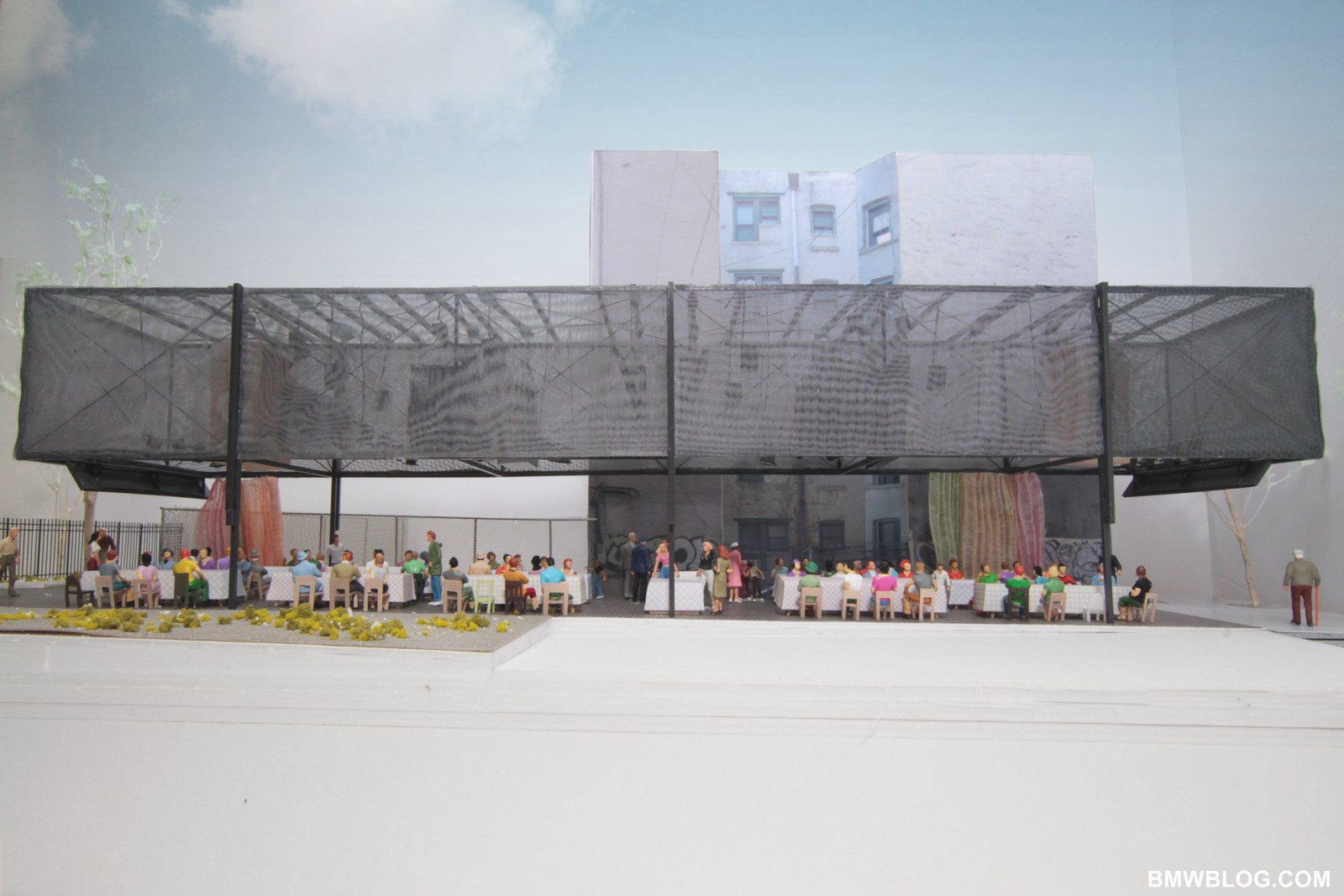 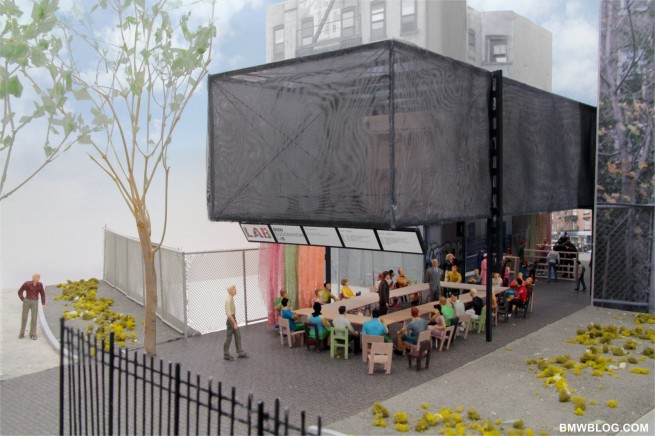 Over the six-year migration of the BMW Guggenheim Lab, there will be three different themes and three distinct mobile structures, each designed by a different architect and each traveling to three cities around the world. The inaugural BMW Guggenheim Lab will be located on the border between Manhattan’s Lower East Side and East Village, at 33 East First Street (between First and Second Avenues), on a site owned by the New York City Department of Parks & Recreation. Designed by Atelier Bow-Wow, an architecture studio in Tokyo, the mobile structure, a compact temporary facility of approximately 2,500 square feet, will easy fit into densely built neighborhoods and be transported from city to city.
The first cycle will conclude with a special exhibition presented at the Solomon R. Guggenheim Museum in New York in 2013, which will explore the ideas and solutions that were addressed at the BMW Guggenheim Lab’s different venues. The two remaining two-year cycles will be announced at a later date.

The theme for the first three-city cycle is Confronting Comfort, an exploration of how urban environments can be made more responsive to people’s needs, how a balance can be found between modern notions of individual versus collective comfort, and the urgent need for environmental and social responsibility.

An international Advisory Committee has nominated the New York BMW Guggenheim Lab Team (BGL Team), an innovative group of emerging talents in their fields who will create the diverse range of programming that will be presented in New York.

“We are delighted to be launching the BMW Guggenheim Lab in New York City, followed by Berlin, two progressive urban centers of culture and creativity, and could not be more pleased with the exceptional talent that the members of the BMW Guggenheim Lab Advisory Committee and Lab Team bring to this project,” stated Richard Armstrong. “This pioneering effort to identify new ideas, designs, and strategies that address the serious challenges faced by urban cultures today furthers the Guggenheim’s deep commitment to education, research, and design innovation. It is a pleasure to be collaborating with BMW, and we look forward to continuing to work together as the BMW Guggenheim Lab continues to evolve and unfold.” 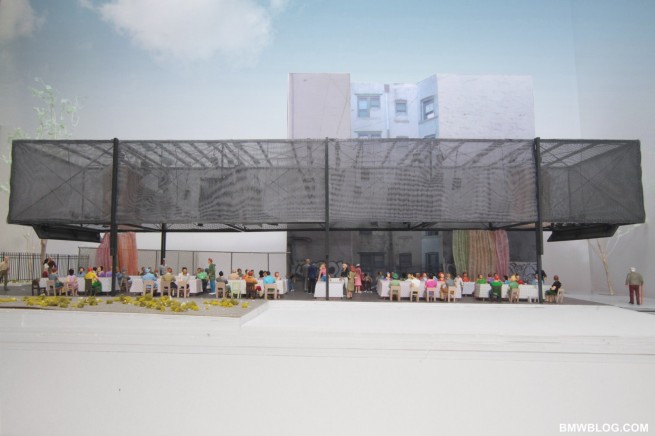 “Never before has our company been involved in a collaboration of this scale with a cultural institution,” stated Frank-Peter Arndt, member of the Board of Management, BMW AG. “I could not think of a greater project than the BMW Guggenheim Lab to coincide with the 40th anniversary of our international cultural engagement. Richard Armstrong has rightly called our joint activity an ‘adventure.’ At BMW, we are fond of adventures. With the esteemed Solomon R. Guggenheim Museum and Foundation at our side, we are eager to engage together in a multidisciplinary worldwide dialogue to confront today’s issues, from questions of sustainability and architecture to those of engineering and science.”

“New York is the perfect launching ground for the BMW Guggenheim Lab, as it is one of America’s foremost megacities and a great incubator for thought leadership,” said Jim O’Donnell. “This collaboration underscores BMW Group’s commitment to New York and to addressing the challenges of the world’s most populated urban centers.”

The Advisory Committee for the first cycle of the BMW Guggenheim Lab, an international group of experts from various disciplines, includes Daniel Barenboim (Conductor and Pianist, Argentina), Elizabeth Diller (Designer, USA), Nicholas Humphrey (Theoretical Psychologist, UK), Muchadeyi Ashton Masunda (Mayor of Harare, Zimbabwe), Enrique Peñalosa (Former Mayor of Bogotá, Colombia), Juliet Schor (Economist and Professor of Sociology, USA), Rirkrit Tiravanija (Artist, Thailand), and Wang Shi (Entrepreneur, China). The Advisory Committee is charged with nominating candidates for the BGL Team for each of the three cities of the first cycle, as well as providing their own ideas relating to the theme and consulting with members of the BGL Team. 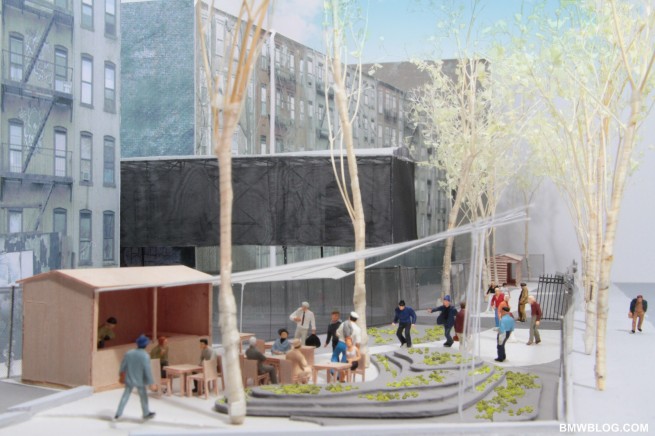 The New York BGL Team is comprised of Omar Freilla, a Bronx, New York–based environmental justice activist, cooperative developer, and founder and coordinator of Green Worker Cooperatives; Canadian journalist and urban experimentalist Charles Montgomery, an advocate for sustainability and well-being; Nigerian microbiologist and inventor and 2010 TEDGlobal Fellow Olatunbosun Obayomi; and architects and urbanists Elma van Boxel and Kristian Koreman of the Rotterdam-based architecture studio ZUS [Zones Urbaines Sensibles]. Video interviews with each of the BGL Team members can be viewed at youtube.com/bmwguggenheimlab.

“The Parks Department is delighted that the first BMW Guggenheim Lab will launch on a Parks site. First Park will provide a unique outdoor urban setting for this ambitious public program, which aims to reinvent the way we think about cities,” said New York City Parks & Recreation Commissioner Adrian Benepe. “The project will also benefit residents of the Lower East Side and the city at large by permanently improving a long-vacant lot.”

“New York City’s creative identity comes from the energy of its residents and neighborhoods,” said Cultural Affairs Commissioner Kate D. Levin. “That’s why we are so proud that New York is the launch site for this project aimed at generating new ideas and designs for community spaces and urban living. This is public-private partnership at its best, combining the innovative strengths of the Guggenheim, BMW, and the people of New York.”

“We look forward to welcoming the BMW Guggenheim Lab to Berlin next year. In 2012 the BMW Guggenheim Lab will engage our community in a crucial dialogue about urban responsibilities and strategies for the future,” stated Berlin Mayor Klaus Wowereit. “With its provocative theme of Confronting Comfort, the BMW Guggenheim Lab will explore the conditions and potentials of our city and of the urban environment worldwide. As a vibrant and progressive center of art and design innovation, and a laboratory in its own right, Berlin will be an ideal site and an important contributor to this exciting initiative.”

The inaugural BMW Guggenheim Lab, located at 33 East First Street (between First and Second Avenues), will be open Wednesdays and Thursdays, 1 to 9 pm, Fridays, 1 to 10 pm, and Saturdays and Sundays, 10 am to 10 pm.

The BGL Team will design public programs, experiments, and an installation exploring how interventions and innovations that decentralize, decelerate, localize, and democratize New Yorkers can reinvent the urban experience, creating a more adaptable and sustainable version of comfort. The BMW Guggenheim Lab is conceived to spark visitor curiosity and interaction, and audiences will be encouraged to participate and contribute to the answers, ideas, and stories generated inside. Programming will include unconventional tours exploring the urban fabric, hands-on experiments and how-to workshops, film screenings, and community-based discussions.

Each BGL Team member will also work closely with collaborators such as AgeLab, Massachusetts Institute of Technology (MIT); Environmental Psychology, The Graduate Center, City University of New York (CUNY); Latin Lab, School of Architecture, Planning and Preservation, Columbia University; Poiesis Fellowship, Institute for Public Knowledge, New York University; and THNK, the Amsterdam School of Creative Leadership. These local and international collaborators will share their expertise and contribute their knowledge to enrich the ideas and proposals of the BGL Team.