The first photos of the facelifted 2012 Mercedes-Benz C63 AMG leaked on the interwebs today way ahead of its official unveiling at the 2011 Geneva Motor Show. As the BMW M3 Sedan received a design facelift in 2009, the 2012 C63 AMG goes through a series of cosmetic changes.

On the outside, the C63 AMG gets a set of SL-inspired headlamps. Car’s front fascia is new with rectangular daytime running lights, a wider center opening, a reduction in vertical gill count to one per side—and includes a grille with one fewer horizontal bar.

At the rear-end, LED taillights match the flashy front-end. The C63 AMG leaked features one of the Development Package models, which is visually differentiated by its carbon-fiber trunklid spoiler and two-piece front brake rotors with red calipers all around. The rear fascia also features a black diffuser portion now extending a little more up the bumper.

Inside, the C63 gets the same updates as the C-Class models: a reworked dash with a 5.8-inch central display running a new interface and a crisp 4.5-inch color display in the gauge pod.

AMG opted to retain the 6.2-liter V8 instead of fitting its new 5.5-liter biturbo mill, so output remains at 451 horsepower and 443 pound-feet of torque. The Development Package will reportedly stick around for 2012, raising output to 481 hp and nixing the 155 mph limiter to allow the C63 to top out at 174 mph.

The 2012 C63 AMG will go on sale this fall. Pricing hasn’t yet been announced, but car magazines speculate a price point around $61,000.

As with any new Mercedes or other competitors’ cars, we put together a comparison against its counterpart in the BMW lineup, in this case, the 2011 BMW M3 Sedan, E90 bodystyle.

In our opinion, the C63 AMG facelift is quite successful with design lines close to the SL model. The front-end is more aggressive and imposing. Inside, the new interior is a step-up from the previous iteration. 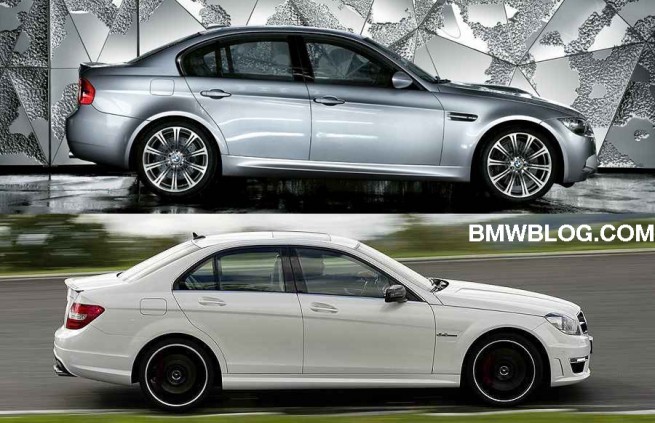