Earlier today, BMW unveiled their latest, newest and updated 6 Series Convertible. Competing for the same high end market as the Mercedes-Benz SL, the new 6er brings a new design language at the table, as previewed earlier this year with the Gran Coupe Concept and more recently, the 6 Series Coupe Concept.

The new 2012 6 Series Convertible has the alure of an athelete, combined with svetlness, classic looks and the 6 Series shark nose. The high-end cabriolet sports a sweeping hood surrounded by a muscular profile. Like the lines projecting outward from the nose of the car and continuing along its full length, the harmoniously curved surfaces of the body take their cue from the movement of waves sent out by a the bow of a motor boat piercing the water. 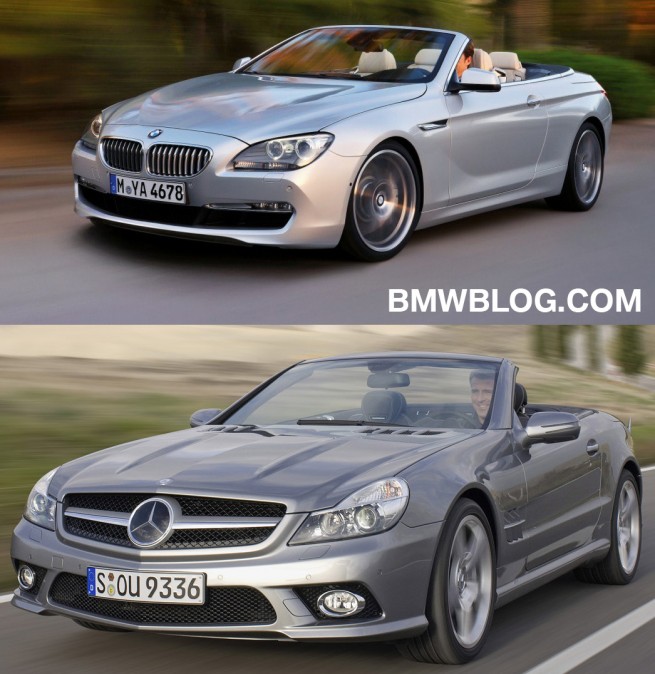 Inside, the expected level of luxury, yet retaining the sportiness of BMW cabin design. Driver oriented dashboard, lots of new technology and gadgets, take the interior design to a new level.
High-quality materials and meticulously formed surfaces combine to produce an ambience defined by luxury, sweeping style and Teutonic functionality. 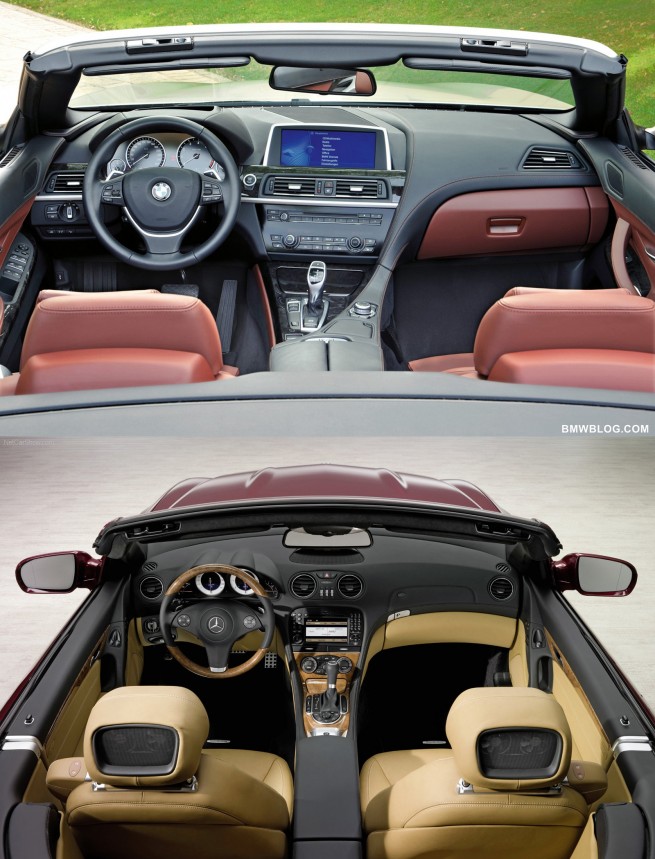 Mercedes-Benz SL has been considered a direct competitor to the 6 Series ever since BMW introduced their high-end convertible into the market. The SL received a face lift in 2008 featuring a new front end that evokes the classic 300SL with a large grille featuring a prominent 3-pointed star and twin “power domes” on the hood; the car also features new headlights with an optional “Intelligent Light System” and a new speed sensitive steering system.

Car and Drive describe the facelift as having “effective styling changes” which include a “new single-bar grille that evokes most of its SL forebears, flanked by L-shaped headlamps that evoke none of them.” The SL features a new deeply sculpted side scoops and a protruding nose mark a revolutionary departure from the conservative styling found on the previous generation SL.

At the rear-end, the SL brings a more sporty angle.

With the facelift, the interior has been also improved with better seats, a new-look three-spoke leather steering wheel, and a completely restyled instrument cluster. In terms of materials, there are two types of leather to choose from, as well as five different aluminum or fine-wood trims and five color combinations.

For the latest model year, Mercedes reduced the offerings from two non-AMG models to just one, ditching the SL600 in the U.S. market.

As with any new BMW model, we decided to put together a photo comparison showcasing the two vehicles from different angles. To stay completely unbiased and fair, we will refrain from drawing any conclusions, but feel free to share your thoughts in the comments box below.