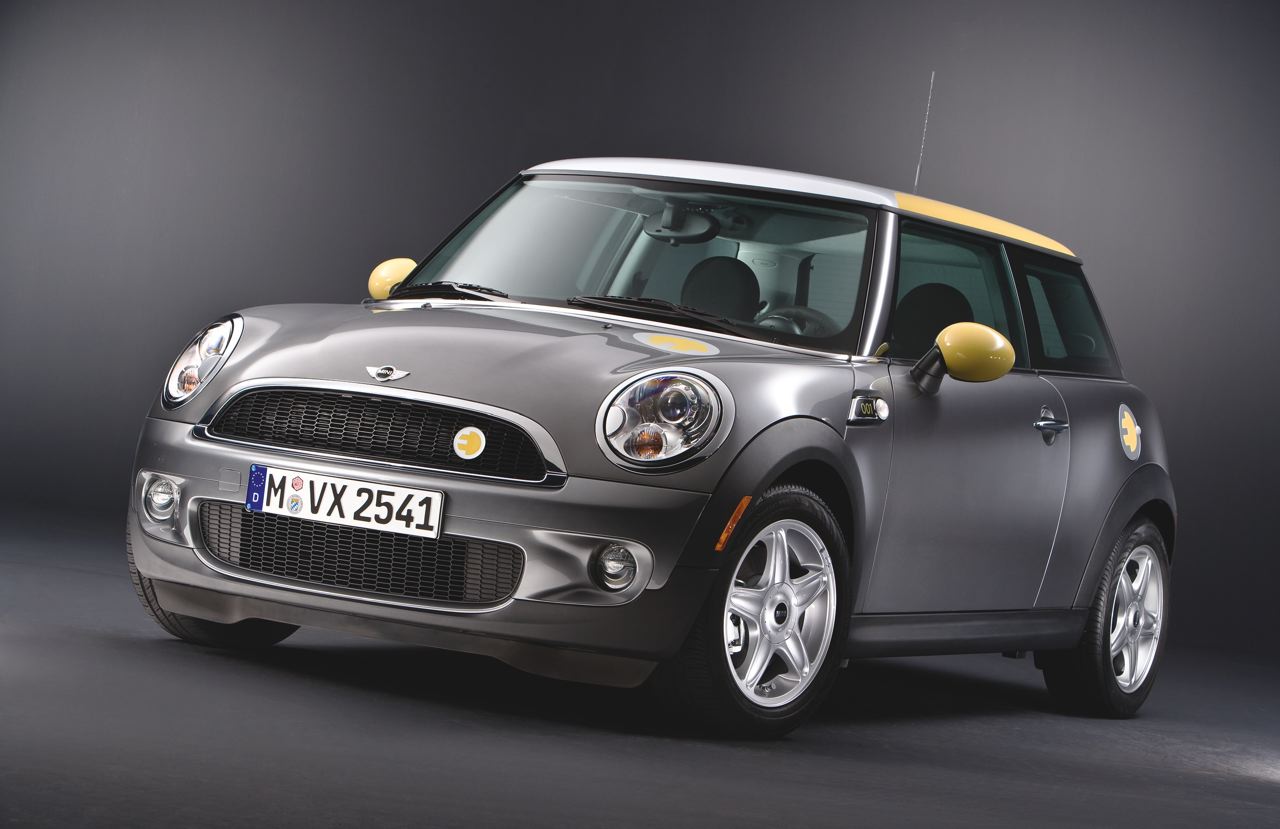 Speaking of BMW’s with electric motors and hybrids, we thought it might be a good time to revisit one of BMW’s most notable hybrids – the MINI E. We’ve already tried it once before when it first debuted last year but recently we had a chance to take a short second look at the car to see what we thought a year later.

OK, so I’ve managed to successfully turn on the MINI E after about 1 minute of trying. It’s not that the fully electric MINI is broken or has issues, it is just that quiet when you’re turning over a car that has no cylinders to fire up and runs strictly on a massive battery pack sitting amidship the little coupe. It literally makes no sounds if the radio is off upon start up – eerily efficient.

Sitting in front of me where a cartoonish tachometer typically stares back at you is a gauge of the same size and design. However, instead of a series of markers for engine revolutions it simply shows a series of percentages, 0 up through 100% indicating the remaining battery power. Aside from the gauge, the interior of the MINI E looks just like that of it’s internal combustion relatives. After slipping the car into reverse without a single noise and then taking off, I begin to worry I may sneak up on a pedestrian without meaning to – I feel like I’m Captain Ramius and I’ve just activated the super silent crawler drive on the Red October.

This is where the drive gets interesting, though. After finding a small patch of straight asphalt I begin to get more aggressive with the throttle and the electric MINI jumps right to attention and shoots off at which point the car begins to emit a little noise for a change. As you pick up the pace, the car makes an interesting sort of gadgety noise. In retrospect, the best way to describe the noise is something between the  modified Back to the Future Delorean and an electric golf cart at full speed. It isn’t a bad noise but it is very different from anything you’ve experienced before from a car. The power application actually reminds me of the 335d in that as soon as you put your foot down on the throttle you feel an instant wave of torque. The MINI E feels quick in a straight line. However, the corners are where the MINI E gets a little off-kilter.

I didn’t push the MINI E very hard in my test drive but I did get the feeling that, with the nearly 600 lbs battery pack sitting where the rear seats should be and with a front-wheel-drive vehicle, the MINI comes across as a bit twitchy and vague when I took corners. It definitely lacks the crispness and coherence of the gasoline-powered version. Thankfully, the small electric car is still a pleasure to drive and retains a good bit of the personality of a MINI – which actually works as a selling point for the car and concepts it represents overall. But, I don’t, nor should others, expect the MINI E to handle just the way the others you can buy actually perform – it is after all a test vehicle only provided to a few hundred people as a means of exploring the viability of fully electric cars in everyday circumstances.

Aside from the handling hiccup, everything works just like a MINI should. The radio, seats, steering – it feels like driving a torquey MINI with the mute button pressed. Only when you’re really heavy on the throttle do you start to hear the electric motors hard at work. Otherwise, there is just a very distant, soft humming as you cruise along. In terms of the throttle, I did notice that the power feels entirely linear which is something you can’t necessarily extract from an gasoline engine – though many have tried. The MINI E feels like a big electric go-kart: for the most part you point the nose where you want it and it will gladly motor to that apex and beyond.

Earlier in the day, I sat through an hour long presenation on the MINI E which didn’t feel as relevant until I’d driven the car. The presentation gave a great deal of insight as to what it took for BMW to launch this program and make it stick for a year. Coordinating special electricity meters and system installations with city engineers and power companies, finding participants willing to hand over $850 a month to be test mules for a relatively uncertain technology – the scale of the planning and implementation of this experiment is massive. According to BMW/MINI, the support has been overwhelming with a small, closely knit community developing around the MINI E as many of the participants find their way through the year-long( though recently extended) experiment.  Many of the participants reportedly don’t want the program to end as they enjoy the electric MINI’s so much!

When looking at the shear scale of the project, it is impressive to see how much BMW/MINI have vested in this direction for alternative fuel sources. Hopefully, cars like this will find their way into the market place though probably not on the MINI or BMW models of today. While it doesn’t compare to the MINI Cooper S or JCW variants and their respective drive trains and exhaust notes, it does make a case that  alternative energy cars can be fun, handsome (dare I say cute?) vehicles – something Toyota has entirely failed at with the Prius.