Following its successful introduction into the market, the new BMW 7 Series is further expanding its position in 2010 as the most innovative model series in the luxury segment. New drivetrain and equipment variants emphasise both the driving pleasure and the outstanding efficiency of BMW’s top-class luxury saloon.

The BMW 740d to be introduced in autumn, for example, will for the first time feature a new straight-six diesel engine with BMW TwinPower Turbo Technology and maximum output of 225 kW/306 hp.

The second diesel model in the range, the BMW 730d, underlines its status as the world’s most economical and lowest emission model in the luxury class by a further reduction in both fuel consumption and CO2 emissions as well as optionally available BMW BluePerformance Technology. Hence, BMW now offers yet another production model already fulfilling the EU6 emission standard today. 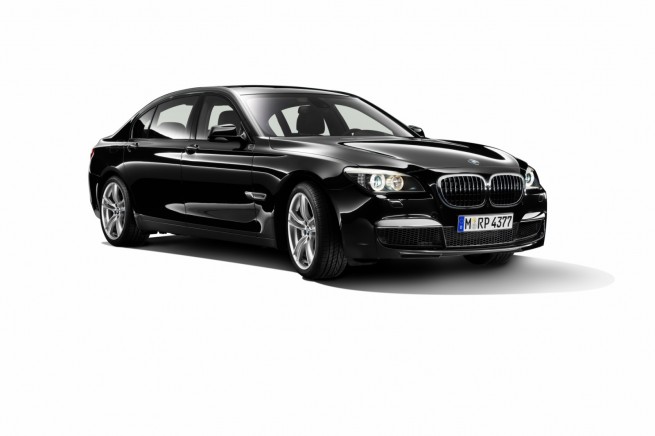 These innovations in the BMW 7 Series model range ensure truly thrilling diversity in the prestigious luxury segment. Including the new top-of-the-range BMW 760i and BMW 760Li with their twelve-cylinder power units, the BMW 7 Series is now available in three gasoline and two diesel variants.

BMW’s intelligent xDrive all-wheel drive will also be introduced in the BMW 7 Series for the first time in the 2010 model year, yet another new feature entering the market in autumn 2009 being the M Sports Package available on all models in the BMW 7 Series.

The new diesel model in the BMW 7 Series is characterised by spontaneous and supreme traction and pulling power combined with outstanding efficiency. The BMW 740d features a newly developed six-cylinder power unit, an all-aluminium engine boasting BMW TwinPower Turbo Technology and common-rail direct fuel injection with piezo-injectors operating at an injection pressure of up to 2,000 bar. 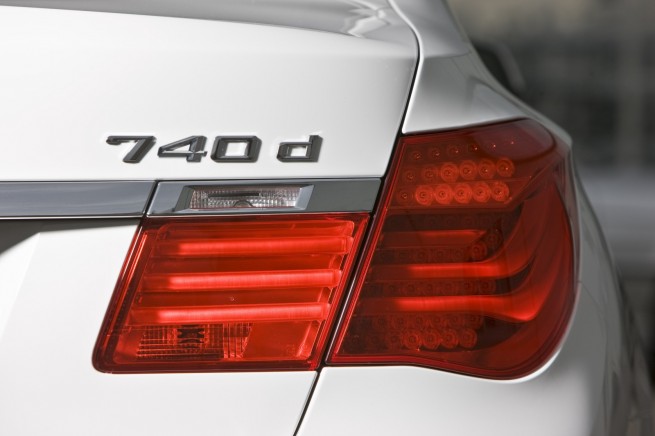 The charge system follows the Variable Twin Turbo principle and is made up of two turbochargers of various size perfectly matched to one another and therefore operating either individually or together as a team, depending on the driver’s power and performance requirements. High-pressure fuel injection ensures particularly precise dosage of fuel optimising both the car’s efficiency and the emissions coming from the engine.

The new power unit delivers maximum output of 225 kW/306 hp and peak torque of 600 Newton-metres/442 lb-ft maintained consistently between 1,500 and 2,500 rpm. This gives the BMW 740d a level of performance so far only provided by far larger power units, now combined with the superior economy typical of a BMW straight-six diesel.

Average fuel consumption of 6.9 litres/100 kilometres in the EU test cycle (equal to 40.9 mpg imp) and a CO2 emission rating of 181 grams per kilometre, finally, mark new records for efficiency in this performance class.

Following the BMW 330d already introduced in autumn 2008, the BMW 730d may also be equipped as an option with BMW BluePerformance Technology. On the BMW 730d with BMW BluePerformance the diesel particulates filter and the oxidation catalyst likewise featured as standard are supplemented by an NOx storage catalyst. As a result, exhaust management in this new 180 kW/245 hp six-cylinder diesel already reduces nitric oxides to the standard not coming into force until the introduction of EU6 in the year 2014.
The introduction of BMW BluePerformance Technology has no influence on the fuel consumption and CO2 emissions of the BMW 730d, which are in-deed being further reduced once again in the 2010 model year. Modifications on the engine and the drivetrain reduce the average fuel consumption of the BMW 730d determined in the EU test cycle to 6.8 litres/100 kilometres (equal to 41.5 mpg imp), with the CO2 emission rating moving down to 178 grams per kilometre. As a result the BMW 730d is further expanding its leading position as the most efficient saloon in the luxury segment.

Like all other model variants, the BMW 730d owes its outstanding efficiency to superior engine technology as well as the powerful impact of BMW EfficientDynamics naturally featured as standard. Just how fuel-efficient a vehicle may be in the use of energy the driver of a BMW 7 Series will see in future not only on the fuel gauge, since the instrument cluster will be supplemented as of the 2010 model year by a recuperation indicator.

A graphic display next to the current fuel consumption indicator in the lower half of the rev counter presents the generation of electric power in overrun and while applying the brakes, the blue arrow being activated as soon as Brake Energy Regeneration feeds energy into the on-board network without any fuel being consumed in the process.

BMW 750i xDrive and BMW 750Li xDrive: double debut for xDrive in the BMW 7 Series.

BMW already offers an intelligent all-wheel drive system in the BMW X models as well as the BMW 5 Series and the BMW 3 Series, promoting both driving dynamics as well as driving stability and traction. With its special features, BMW xDrive has indeed already made BMW the world’s most successful manufacturer of all-wheel-drive cars in the premium segment. And now the range of cars with BMW xDrive is being enlarged once again.

Starting in the 2010 model year, BMW xDrive will be available for the first time also in the BMW 7 Series. In the BMW 750i xDrive and the BMW 750Li xDrive this permanent, electronically controlled all-wheel drive ensures appropriate distribution of the power of 300 kW/407 hp generated by the V8 with its BMW TwinPower Turbo Technology, thus catering for all demands in every situation.

Through a power divider with an electronically controlled multiple-plate clutch, xDrive feeds exactly the right amount of power in every situation to the axle which, through its wheels, has the best grip on the road. Precise and quick control of this power distribution gives BMW’s all-wheel-drive luxury saloons truly supreme and outstandingly safe driving behaviour under all conditions.

Through its dynamic operation, xDrive also helps to give the new luxury performance models with this technology the neutral behaviour in bends and supreme tracking stability so typical of an all-wheel-drive BMW. In bends more drive power is fed to the rear axle in order to make the car even more nimble and avoid any understeer.

In the process the operation of xDrive is based on the steering angle pre-determined by the driver. While, when driving smoothly in a straight line, the front-to-rear power split is 40:60, up to 80 per cent of the drive power goes to the rear axle in a bend, ensuring spontaneous steering behaviour precisely following the actual radius and course of the bend. Then, when leaving the bend, the distribution of drive power returns to normal in the interest of maximum traction when accelerating again in a straight line.

M Sports Package featured for the first time in the BMW 7 Series.

The BMW 7 Series is characterised not only by its powerful design, supreme comfort and innovative features, but also by dynamic engines and superior suspension technology as well as fascinating, sporting performance. Indeed, no other sedan in the luxury segment offers such a dynamic driving experience of this calibre and quality. 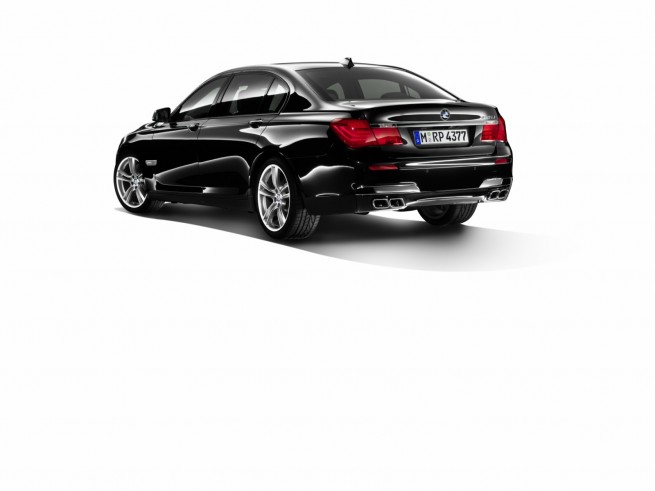 Now this particular forte of the BMW 7 Series may be further accentuated for the first time by a BMW Sports Package setting further highlights both out-side and within the car for even greater Sheer Driving Pleasure and a truly unique look.

In combination with the M Sports Package, the customer also has the choice of exclusive paintwork in Carbon Black Metallic, apart from six other body colours all available as an alternative.

The dynamic look of the car is rounded off by 19-inch M light-alloy wheels in double-spoke design featuring different-sized tyres front and rear. As an option there are also 20-inch M light-alloy wheels in double-spoke design, again with different tyre sizes front and rear.
And last but not least, electronically controlled BMW Dynamic Drive also comes in the M Sports Package for the BMW 7 Series. 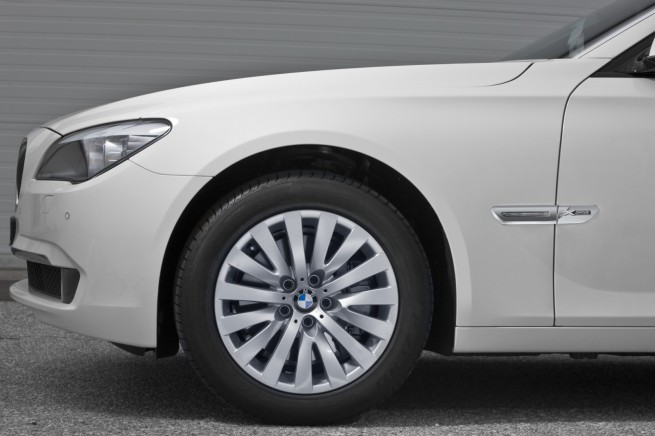 Sports seats with leather upholstery, the M leather steering wheel with multi-function buttons and the M footrest underline the active character of this luxury performance saloon also within the passenger compartment. BMW Individual roof lining in anthracite and interior trim in fine-grain aluminium round off the interior ambience with its focus on sporting performance.

The BMW 760i and the BMW 760Li, finally, come with BMW Individual roof lining in alcantara anthracite as well as high-quality wood trim.

The BMW M Sports Package is available for all models in the BMW 7 Series with both normal and extended wheelbase.