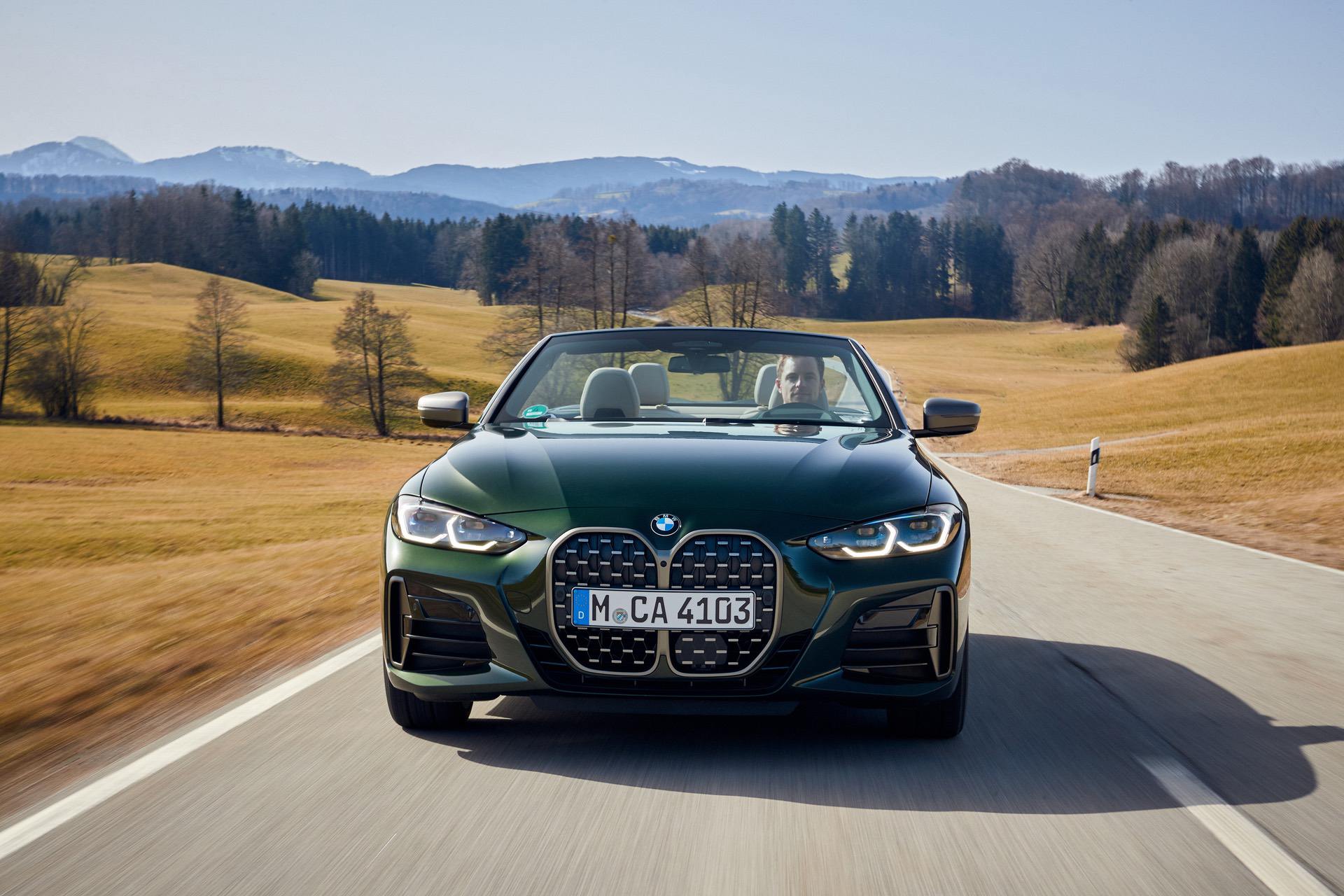 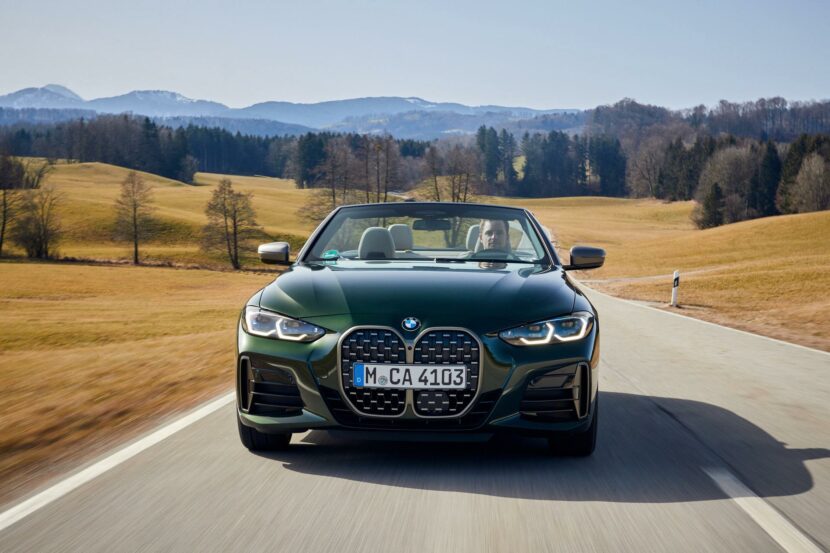 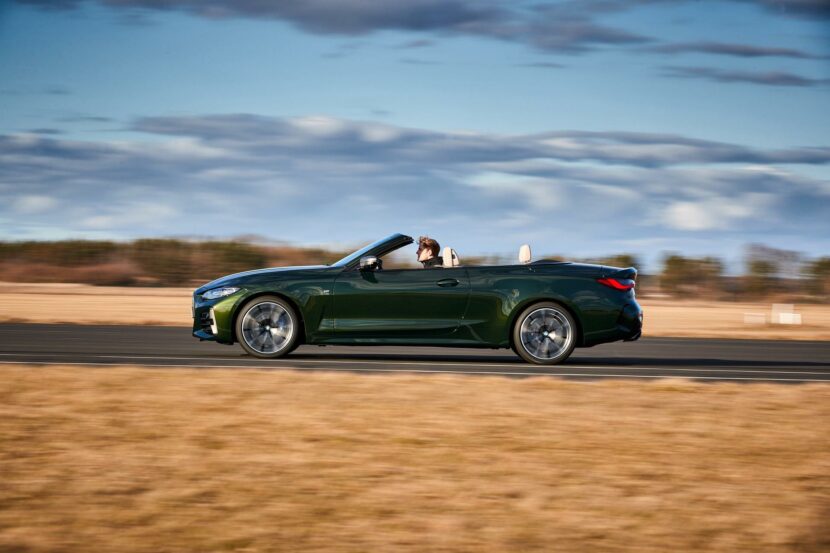 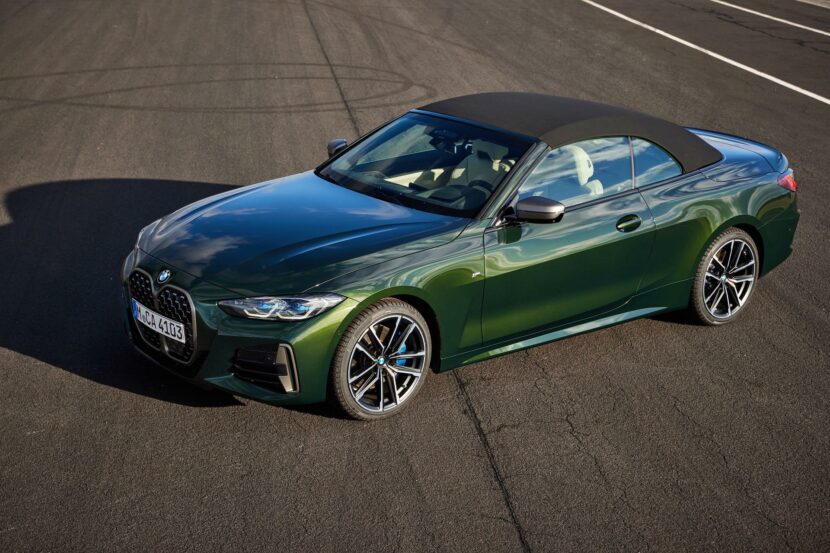 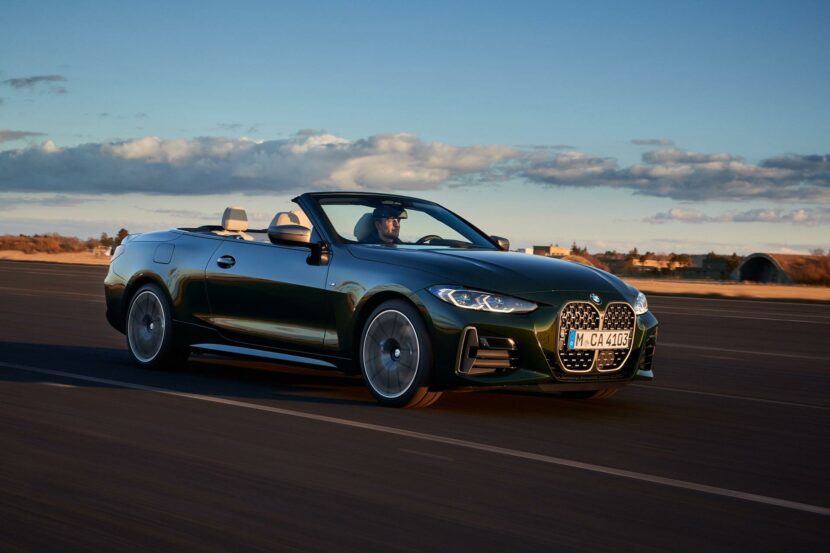 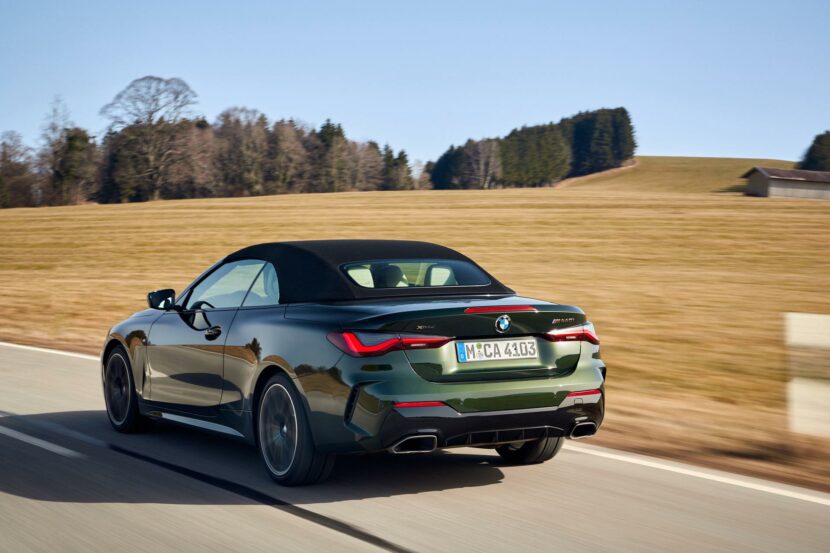 The history of BMW Convertibles dates back to the early days of BMW. In 1936, the BMW 326 was the very first model with a retractable roof from the Munich-based automaker. Even back then, customers felt the urge for fresh air and warm rays of sunshine on their skin. Over the decades, this basic feeling and the desire for freedom led to the sale of more than 900,000 Convertibles from BMW’s mid-size class. But recently, BMW customers are looking for more than just a bit fresh air or sunshine, and rather to express themselves with their new cars. And the all-new BMW 4 Series Convertible could certainly be such a car. 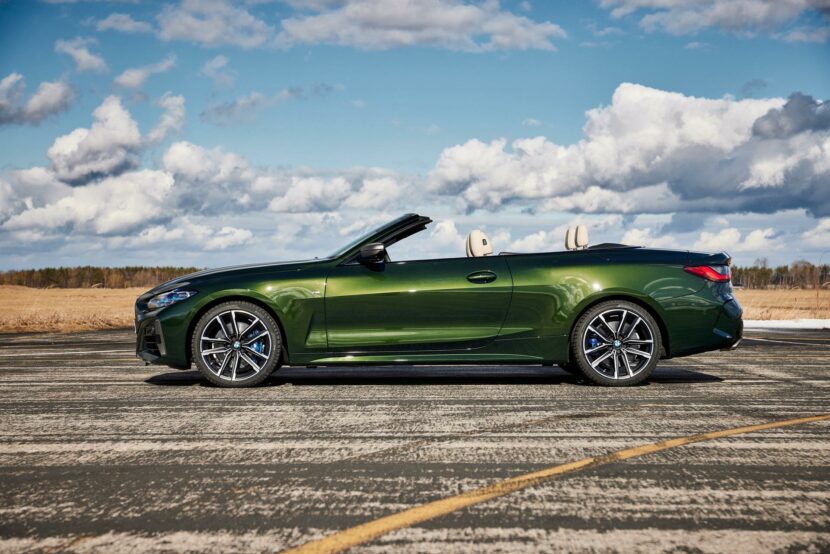 To find out what else the new BMW 4 Series Convertible can do, we recently had the chance for a first drive at the BMW M Power Days in Munich. Nothing less than the top model of the 4 Series, the BMW M440i xDrive Convertible, was made available to us for a short trip from Garching to Maisach. The M Performance model came in a spectacular configuration. It featured San Remo Green metallic as exterior color while the interior was dominated by the Canberra beige color of the leather seats. The paint shows as light green in direct sunlight and a darker green in the shadow.

Another detail we immediately noticed is the new soft top. While the two previous model generations, the E93 and F32, were using a hardtop, BMW is now back to the lighter form that was last used in the E46. Compared with the predecessor model, the weight saving add up to 40 percent and increases the trunk volume to a total of 385 liters when the top is closed. Even when the top is open, 300 liters of luggage can still be loaded.

The Elephant In The Room 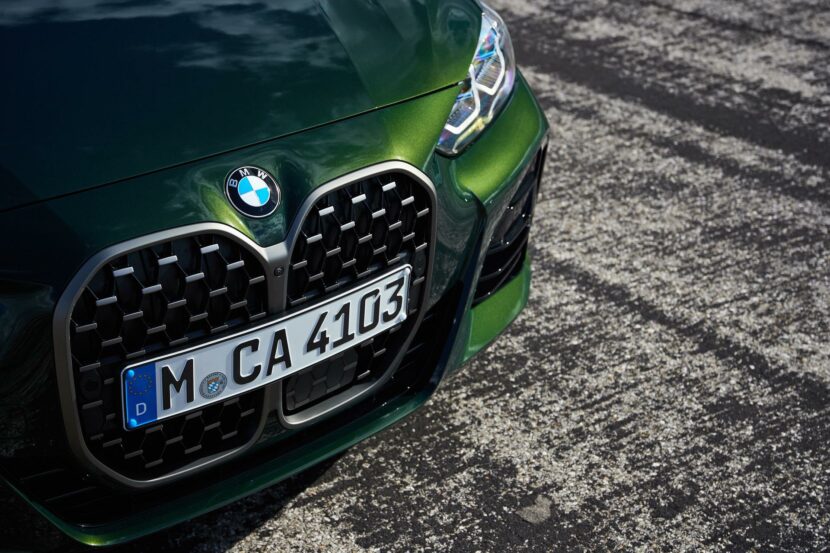 Without any further ado, let’s cover the most controversial topic of the new BMW design language. I’m lucky enough to live in the Munich area. So I was probably one of the first to get a look at the new design on the BMW Concept 4 Series when it was displayed in February 2020 at the BMW Welt. When I saw the car for the first time I wasn’t convinced about the large kidney grille. And also when the production version of the 4 Series was exhibited, I wasn’t a fan.

But once I saw it in person on the street and after and after seeing the grille in my rear view mirror during a recent press drive, I realized that this is the beginning of a new era. And changes can shape the future. But of course, not everyone likes it or agrees with it. But that’s okay. The new 4er doesn’t need to be everyone’s darling. It needs to set itself apart from the 3 Series and needs to go down its own path.

The 4 Series does it by paying tribute to the former BMW generations of the BMW 328 with the most intelligent and technical advanced kidney grille ever. It fulfills the increased demand for cooling air and includes the park distance sensors as well as the front camera of the parking assistant plus. And once you saw the new 4er or the new M3 or M4 in your rear view mirror, you might see the design with different eyes just as I did.

Next to the dominating kidney grille in the middle of the front, the sharp and slim headlights contribute to the new look of the 4 Series Convertible. LED headlights come standard and BMW Laser lights are available as an option.

Inside, the BMW M440i Convertible makes use of the familiar interior design of the 3 Series generation. Only a few additional buttons, such as the switch for the retractable roof or for the neck heating control are hinting at an open-top. And that’s certainly not a bad thing at all. Unlike the BMW 3 Series, however, the 4 Series Convertible comes standard with sports seats which can be electronically adjusted to the drivers need. 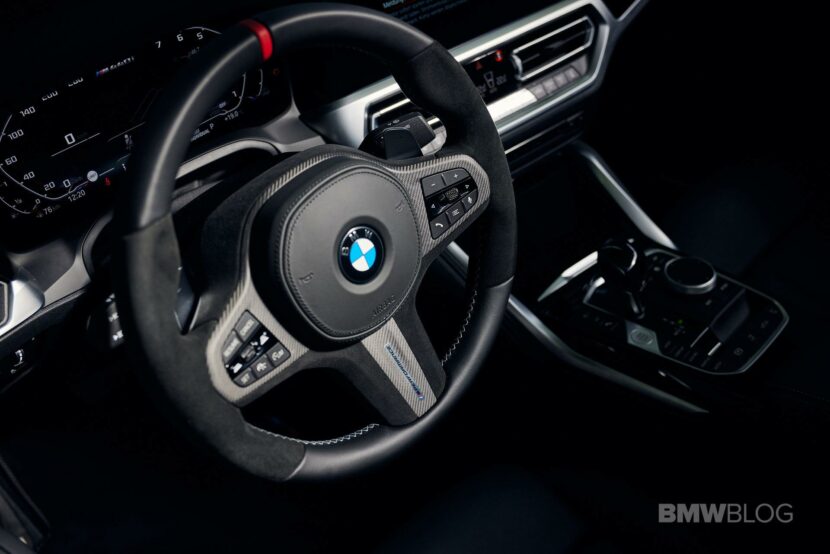 One disappointment right up front: The all-new BMW 4 Series Convertible will no longer be available with a manual transmission. All model variants of the new generation will only be offered with an 8-speed Steptronic automatic transmission. Even though this is a purely logical decision, considering that the previous generation had a 30% market share in the U.S., it is still a shame that the manual transmission will disappear for another model range.

But once you got behind the wheel and experience the first kilometers in the M440i, you are soon appreciating the benefits of the automatic transmission. Not only the refined transmission is able to keep the car at any moment in the most efficient and yet sportiest gear, it now also offers a so called Sprint function. The new feature is activated by using the left shift paddle for at least a second while running in Sport Mode. At the very same moment, the transmission switches straight into the lowest possible gear for maximum power. Having used this features a few times made overtaking an easy task.

Another reason for this is, of course, the magnificent engine of the M440i. The very same engine I drove in the M340i xDrive Touring and in the Z4 M40i. And the six-cylinder in-line petrol engine, code-named B58, impressed me once again with its smooth and consistent power delivery. The maximum torque of 500 Nm is available at 1,900 rpm. Once you step on the gas pedal, the engine immediately responds and distributes 374 hp (275 kW) to all four wheels.

And thanks to the new 48V Mild Hybrid system, I come to that in a second, there is also not the slightest sign of turbo-lag. The acceleration is so quick that you hit 100 km/h (62 mph) in 4.9 seconds, before reaching the electronically limited top speed of 250 km/h (155 mph). At no point in time did I feel that the engine had a hard time accelerating the M440i xDrive Convertible. The B58 engine simply impresses with a powerful blend of sovereignty, lightness and sportiness. 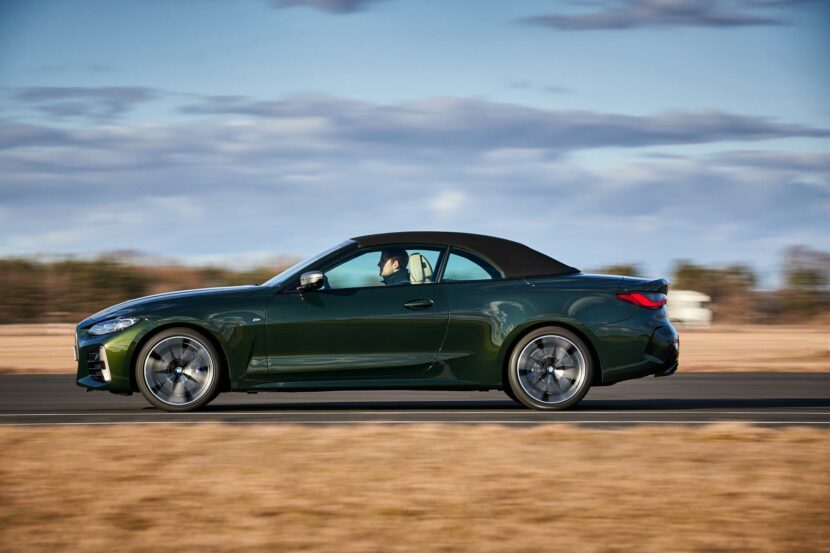 In addition to the superior power of the petrol engine, the Mild Hybrid technology improves the overall efficiency and offers an additional 11 hp (8 kW) of extra power. The Mild Hybrid uses a 48V starter-generator to assist the engine and delivers an electric boost when accelerating while a second battery stores power from the Brake Energy Regeneration system.

The top M440i xDrive and M440d xDrive models come standard with a range of M Performance specific options, such as the M sport suspension. It’s available as an option for the entry-level versions of the 4 Series Convertible. It also includes even stiffer settings for the lift-related damping and springs. If you think the poor road conditions in your area are contributing already enough to a stiffer ride quality, you can order the Adaptive M suspension as an option. The electronically controlled dampers offer the widest possible range, from a soft ride quality in COMFORT to a seriously sporty setting in SPORT.

The new BMW 4 Series Convertible will be available starting from March 2021 onwards. In Europe, there are petrol-powered models: BMW 420i, BMW 430i and BMW M440i xDrive. Yet, there is only one diesel – BMW 420d. Later on, fans of the diesels will also get their fair share with two additional models – the BMW 430d and the BMW M440d xDrive.

Of course, country specific market introductions will apply and certainly no diesel-powered version will come to North America. Customers in the United States have the choice between the BMW 430i Convertible for a base price of $53,100 and the BMW M440i Convertible for a base price of $64,000. Both versions are currently offered as rear wheel drive only.

Over the course of the year, the BMW M4 Competition Convertible with M xDrive will take over the lead from the M440i xDrive Convertible as the most powerful model.

Convertible drivers have always felt the urge for freedom and self-realization. Driving with the top down is simply a way of life. The new BMW M440i xDrive Convertible is designed to provide an automotive platform to this type of customer and does so with an expressive design language, a powerful engine and superior driving characteristics.

In addition, the BMW 4 Series Convertible also offers a certain degree of everyday practicality and still has room for two additional passengers on the back seat. There is also plenty of storage space in the trunk, even when the top is open. And you can get to your weekend destination fast and in style.

Convertible drivers have always felt the urge for freedom and self-realization. Driving with the top down is simply a way of life. The new BMW M440i xDrive Convertible is designed to provide an automotive platform to this type of customer and does so with an expressive design language, a powerful engine and superior driving characteristics. In addition, the BMW 4 Series Convertible also offers a certain degree of everyday practicality and still has room for two additional passengers on the back seat. There is also plenty of storage space in the trunk, even when the top is open. And you can get to your weekend destination fast and in style.