We recently saw a couple of head-to-head races from Motor Trend’s recent Best Driver’s Car competition. One featured the BMW M2 Competition and the Toyota Supra, while the other featured a BMW M850i and a Bentley Continental GT. Now, MT decided to do something a bit more interesting and have their own Grans Prix with the cars from BDC, at Laguna Seca. In this video, we get to see both the BMW M2 Comp and the Toyota Supra.

To start off the Grand Prix, MT has a drift-off to see what order each of their six drivers get to choose their cars in. For the drift competition, they use the BMW M2 Competition, as it’s naturally a superb drift car. After the drift competition, which is surprisingly funny, they get to choose their cars from all of the cars available in BDC. Actual Formula Drift champion Chris Forsberg chose the Toyota Supra for his grand prix car, which is by far the slowest of all the choices.

No one chooses the M2 Comp, although it may have been kept out of the race for being the drift car. However, the Toyota Supra sort of represents BMW, as it’s essentially a Z4 M40i under its skin. 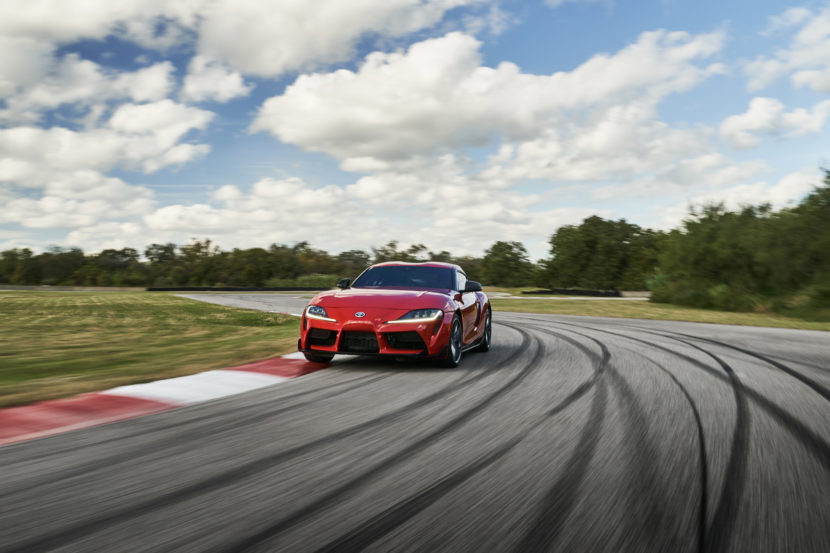 Being the slowest car of the bunch, the Supra with Forsberg behind the wheel took pole position. Thanks to that, and Forsberg’s skillful driving, the relatively lowly Toyota Supra was able to hold first place through the entire first lap, holding off incredible cars like the McLaren 600LT, Porsche 911 Carrera S and Shelby GT350.

Admittedly, once the cars hit the long straight at the beginning of the second lap, the Supra was toasted. It just didn’t have the power to keep up. Still, it’s impressive how long it held on, even if it eventually ended up in last place after three laps. The Supra is based off of the same chassis that underpins the BMW Z4 M40i and it’s a superb chassis that BMW and Toyota have come up with and it shows in this video. Check it out.