Pole position and podium for BMW driver Glock at Hockenheim 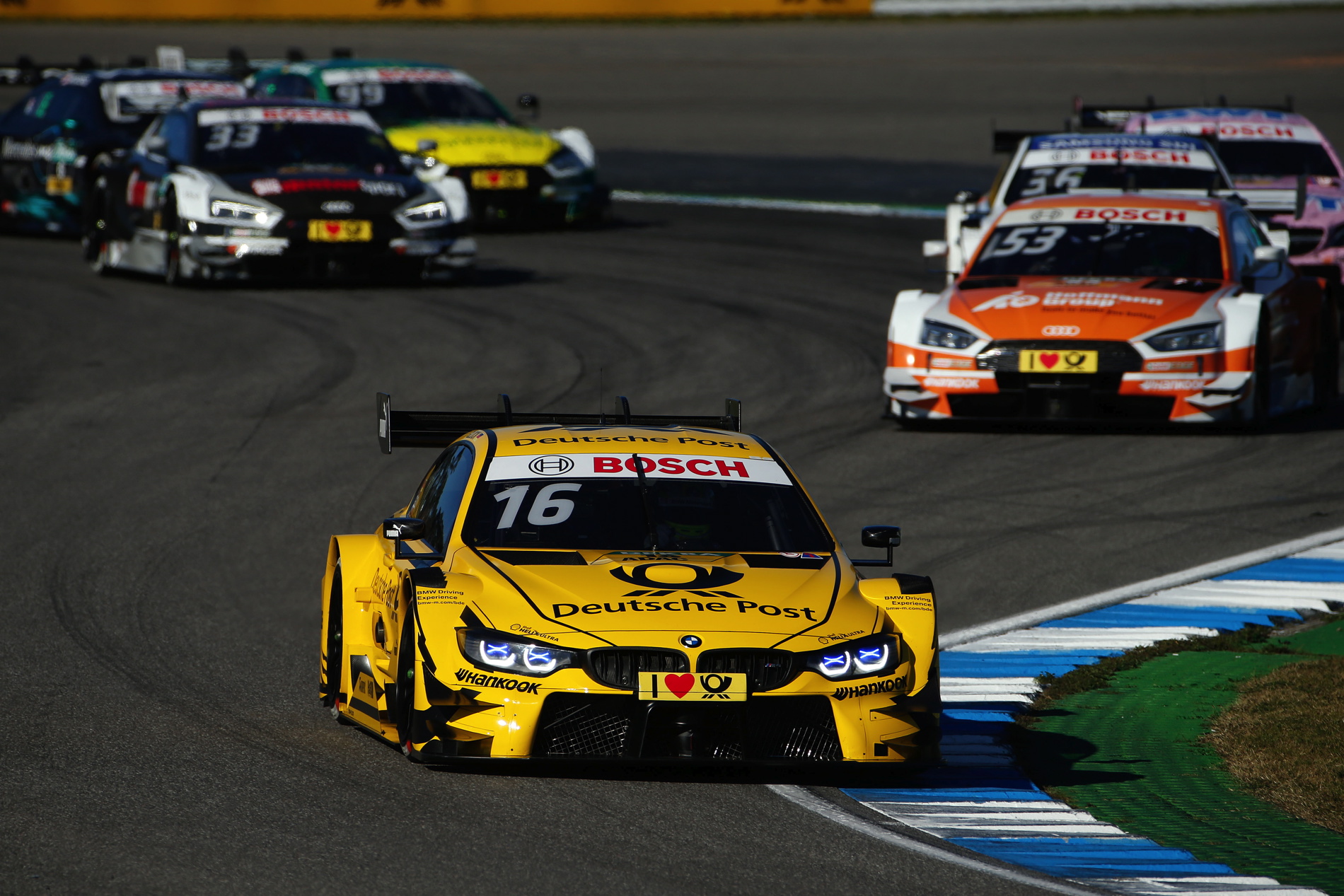 Timo Glock (GER) and the Hockenheimring (GER) once again proved to be a lucky combination for BMW Motorsport in the 17th race of the DTM season. Having shone at the season-opener on the same track back in May, the BMW Team RMG driver impressed again in the penultimate race of the year. At the wheel of the DEUTSCHE POST BMW M4 DTM, Glock initially secured the fourth pole position of his DTM career, before finishing third to take his place on the podium at the end of a hard-fought race. Maxime Martin (BEL) qualified second to make it an all-BMW front row, but narrowly missed out on a podium finish in fourth place. Bruno Spengler (CAN) picked up one point for tenth place. Marco Wittmann (GER), Tom Blomqvist (GBR) and Augusto Farfus (BRA) were 13th, 15th and 17th. 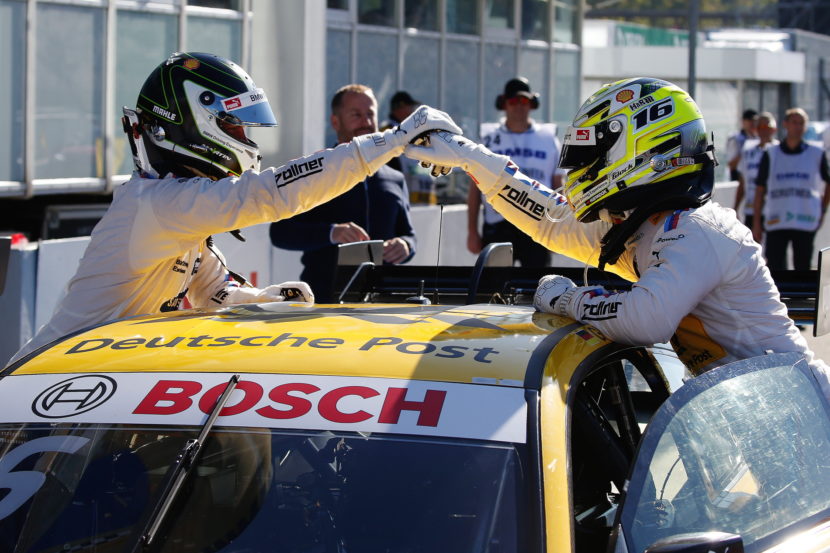 Before the race, fans at the Hockenheimring were treated to a unique spectacle, as three cars from the manufacturers currently represented in the DTM took to the track alongside a Nismo and a Lexus racing car. The Japanese guests had previously completed a number of demonstration laps.

In glorious autumn sunshine, Timo Glock set the fastest time of 1:30.648 minutes in the DEUTSCHE POST BMW M4 DTM. In doing so, he secured the fourth pole position of his DTM career and the eighth of the season for BMW Motorsport. Maxime Martin, in the SAMSUNG BMW M4 DTM, was just 0.037 seconds slower than Glock in second place, and joined his fellow BMW driver on the front row of the grid. Glock received three points towards the Drivers’ Championship for his pole position, while Martin picked up two points for second place. Marco Wittmann was eighth in the Red Bull BMW M4 DTM, while Bruno Spengler qualified 12th in the BMW Bank M4 DTM. Augusto Farfus (Shell BMW M4 DTM) and Tom Blomqvist (BMW Driving Experience M4 DTM) were 14th and 16th. 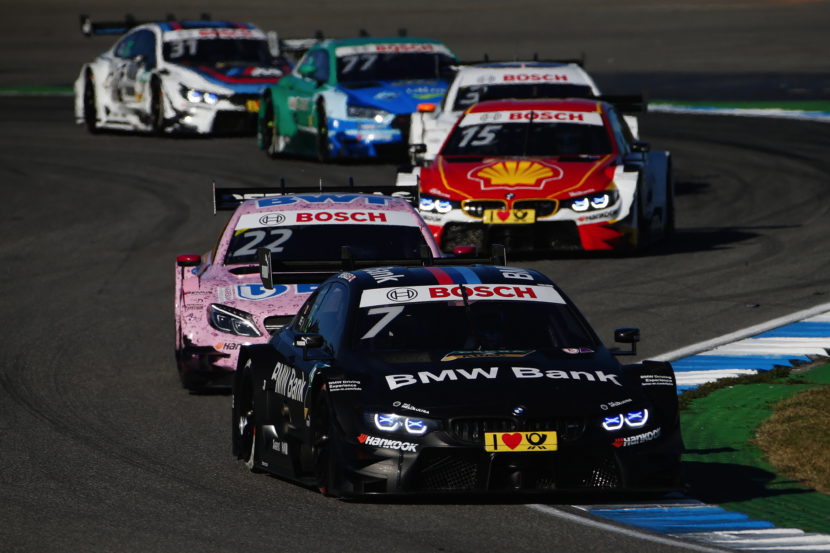 Timo Glock made a good start from pole position and immediately pulled clear of the pack on the opening lap. Maxime Martin lost second place to Jamie Green (GBR, Audi). Green then steadily reeled in Glock, and the pair became embroiled in a spectacular duel for the lead, with Green coming out on top in the end. Martin briefly conceded third place to Edoardo Mortara (ITA, Mercedes), but retook the position once the two cars had made their pit stops. The second half of the race saw Mike Rockenfeller (GER, Audi) work his way through the field, overtaking first Martin and then Glock. The two BMW drivers ultimately crossed the finish line in third and fourth place. Glock claimed the ninth podium of his career. Bruno Spengler overtook Mattias Ekström (SWE, Audi) shortly before the finish, and was rewarded with one point for tenth place. Marco Wittmann, Tom Blomqvist and Augusto Farfus came home 13th, 15th and 17th. 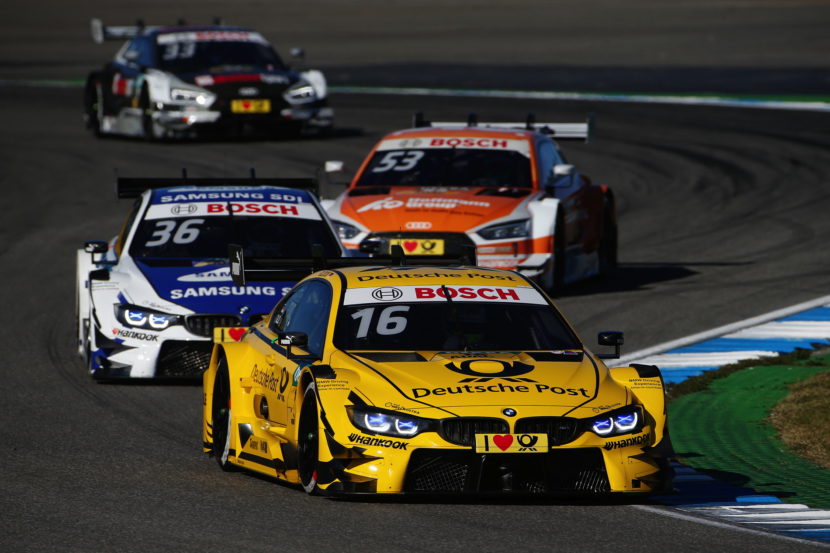 BMW Motorsport Director Jens Marquardt: “As expected, that was a tough race today. We had a very good qualifying, but our guys had to fight for every position in the race. In the end, third and fourth for Timo Glock and Maxime Martin, and tenth place for Bruno Spengler, were the most we could get out of the race. We will definitely give it everything and push hard again tomorrow.”

Stefan Reinhold (Team Principal, BMW Team RMG): “We did not really expect to end the race in the same positions as after qualifying but Timo did a super job. Unfortunately, we had a technical issue during Augusto’s pit stop. In Marco’s case, we have to do everything we can to find more pace tomorrow. There is definitely room for improvement.”

Marco Wittmann (#11, Red Bull BMW M4 DTM – Grid position: 8th place, race result: 13th place – 73 races, 8 wins, 19 podiums, 9 pole positions, 657 points, 2 drivers’ titles): “Unfortunately, we were simply lacking pace today. The car was slightly damaged by a bump with Mike Rockenfeller on the opening lap. I then found myself dropping back through the field instead of making up positions. All in all, it was a disappointing race, and I hope we have a better day tomorrow.”

Augusto Farfus (#15, Shell BMW M4 DTM – Grid position: 14th place, race result: 17th place – 83 races, 4 wins, 12 podiums, 6 pole positions, 374 points):“We obviously expected more than that. My start was good, but we then lost too much time during the pit stop. These things happen in motorsport. Who knows, we could have been on for a top-ten finish otherwise.”

Timo Glock (#16, DEUTSCHE POST BMW M4 DTM – Grid position: 1st place, race result: 3rd place – 73 races, 4 wins, 9 podiums, 4 pole positions, 346 points): “That was quite a race. My reaction time at the start was awesome, and I was able to pull away from the field at first. After that, it soon became apparent that Jamie Green simply had far more pace over the race distance. He overtook me, although I did try to fend him off – but that only worked for a while. He was ultimately far quicker than me. Losing another place to Rocky on the final lap obviously hurts a bit, but I had no grip left and could do nothing about it.”

Bart Mampaey (Team Principal, BMW Team RBM): “I think we did as well as possible. We finished fourth with Maxime, which is a good result. Unfortunately, the start was not ideal. However, we gave it our all, fought hard, and tried to defend our positions. Bruno came through from the back-end of the grid to finish in the points. All in all, it is not a bad result for us but we will try to do even better tomorrow.”

Bruno Spengler (#7, BMW Bank BMW M4 DTM – Grid position:12th place, race result: 10th place – 156 races, 15 wins, 48 podiums, 18 pole positions, 833 points, 1 drivers’ title): “Before the race we knew that it was going to take quite an effort. And we definitely fought hard. Fortunately, we were able to do a long first stint. That meant I had fresh tyres at the end, and was able to go on the attack again. That was very important, as I was able to pick up a point that way. I would obviously have liked to pass Gary Paffett too, but he shut the door on me. To score a point from 12th place on the grid is okay.”

Tom Blomqvist (#31, BMW Driving Experience M4 DTM – Grid position: 16thplace, race result: 15th place – 53 races, 1 win, 5 podiums, 2 pole positions, 194 points): “That was not a good race. There was not really much we could do today starting from that far back. We tried to stay out as long as possible but that did not help us either. We will go again tomorrow, and will push hard again.”

Maxime Martin (#36, SAMSUNG BMW M4 DTM – Grid position: 2nd place, race result: 4th place – 63 races, 3 wins, 10 podiums, 3 pole positions, 355 points): “It was a tough race, and we fought hard, however Audi is simply too strong at the moment. We did our best, but that is about as much as we can hope for at present. We’ll see what we can do tomorrow when we will obviously try to score as many points as possible again.” 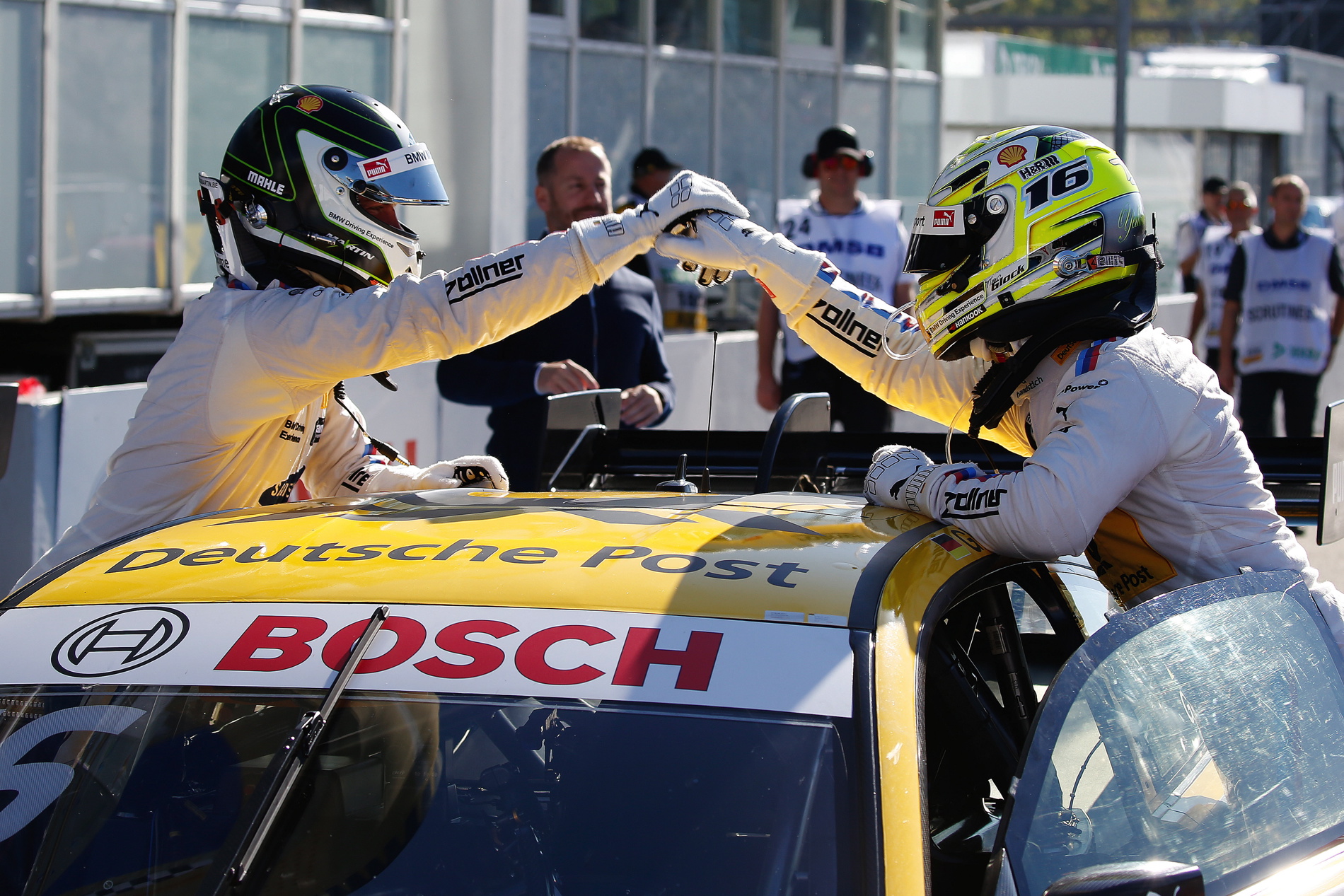 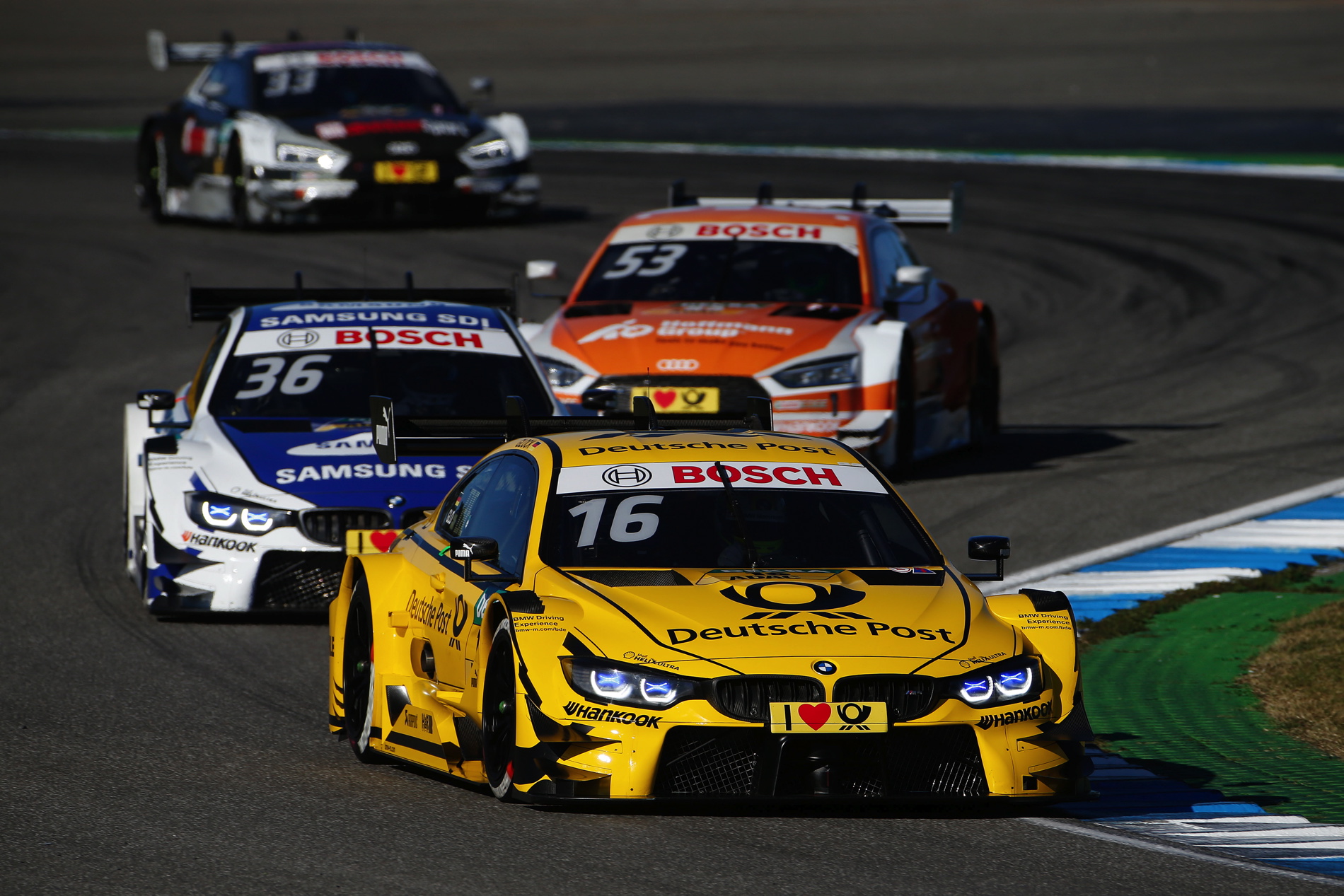 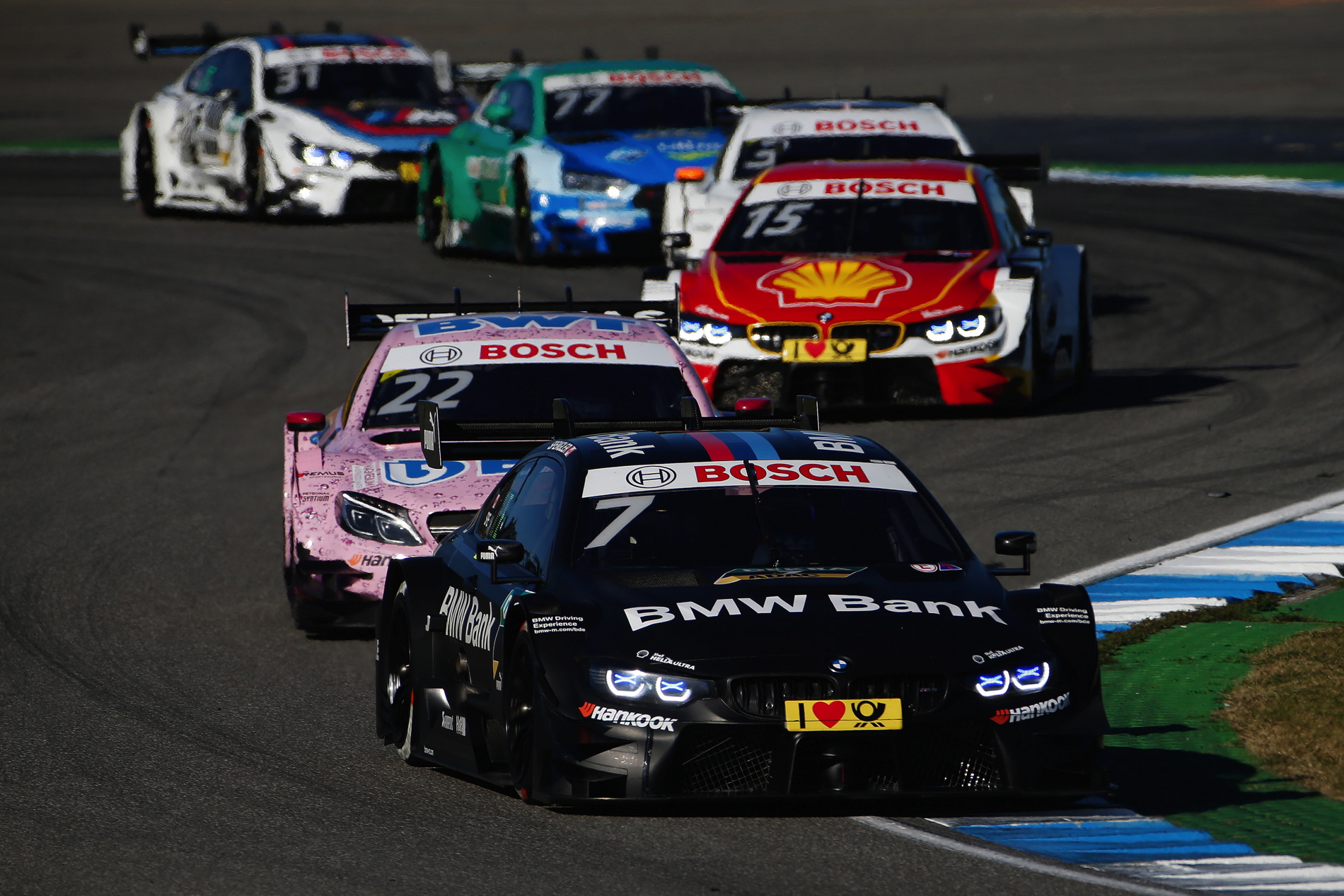 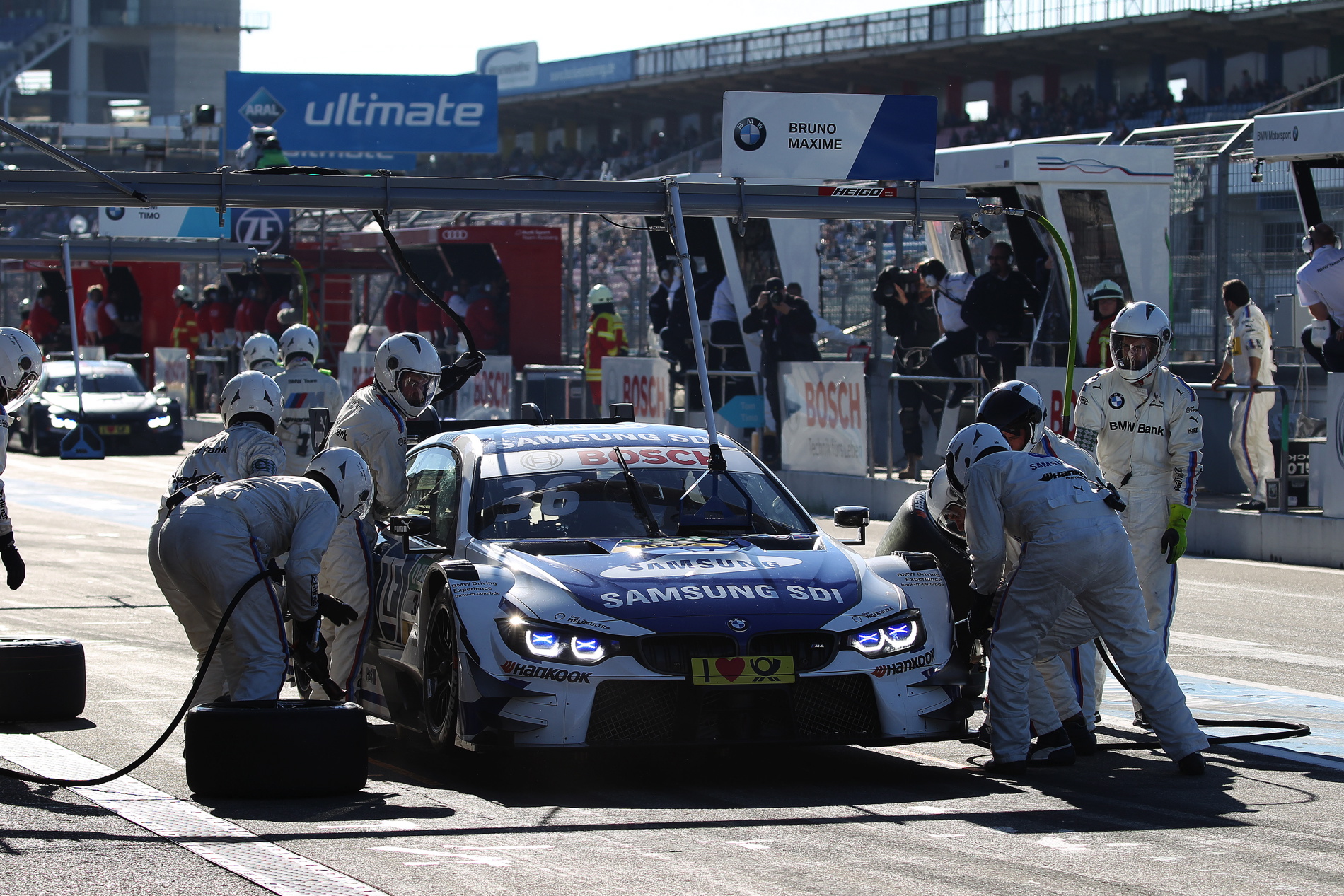