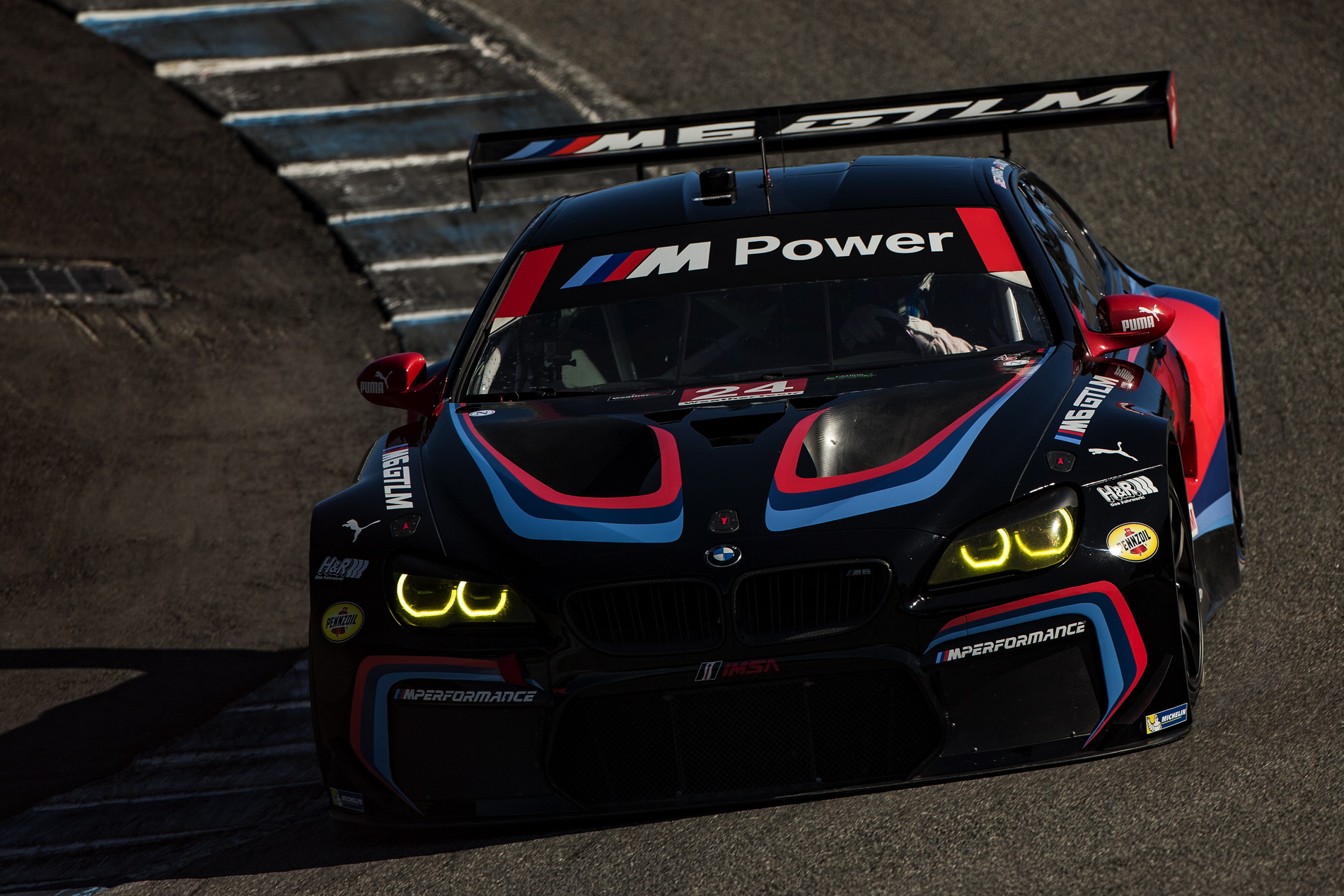 If the color black is the combination of all colors, today’s America’s Tire 250 race at Mazda Raceway Laguna Seca was a combination of every emotion for John Edwards and Martin Tomczyk during their thrilling run to victory in the black-liveried No. 24 BMW M6 GTLM. The duo completed 110 laps of the 2.238-mile, 11-turn Laguna Seca circuit during the two-hour-and-forty-minute contest that saw their BMW off in the sand in turn one on the opening lap to a scant 0.152 second margin of victory at the checkered flag after the final stint of the race was run with a maximum fuel saving strategy. The win was the first for Edwards and Tomczyk as co-drivers and the 16th for BMW Team RLL since beginning in 2009. 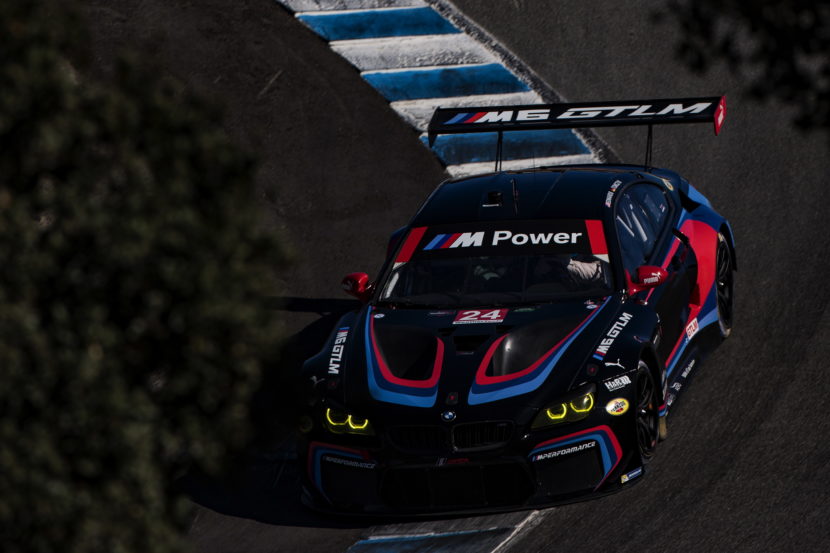 Teammates Bill Auberlen and Alexander Sims finished eighth in the No. 25 BMW M6, two laps down to the leaders after Auberlen was spun off the track on lap 57 and had to be pulled from the gravel trap. Starting the race second in driver points, the disappointing finish effectively eliminates any chance for the pair to win the GTLM driver’s title in the season finale Petit Le Mans in two weeks.

Bad luck on the opening lap saw the No. 25 M6 touch and spin the No. 24 car under braking for turn one. Edwards ended up in the sand on the inside of the circuit, but was able to continue after the balance of the field passed. At the completion of lap eight scoring showed Edwards through the 16-car GTD class and some 23 seconds from the GTLM leading Ferrari. At the end of 30 minutes and 21 laps, Sims held the third spot 10 seconds from first. Edwards raced in ninth, another 13 seconds behind his teammate. Sims fell back to fourth on lap 23 while Edwards moved up one position to take over the eighth position. The first round of pit stops began on lap 28 with Edwards handing off to Tomczyk. Sims stopped one lap later and Auberlen took over for the second stint. After all the GTLM competitors finished their stops and the race concluded its first hour, Auberlen raced in fourth, Tomczyk sixth. 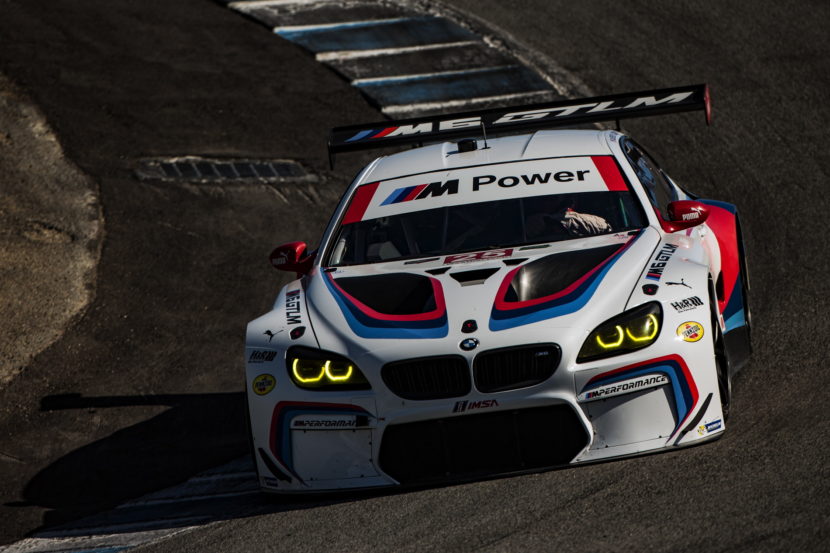 On lap 57 the first caution flag of the race waved after Auberlen was hit from behind by the No. 67 Ford and spun off the circuit in turn three. On the positive side the crew quickly called Tomczyk to the pits and a driver change made with Edwards before the pits were closed. Auberlen was extracted, two laps down. He was called to the pits after they were opened for GT cars and handed the No. 25 M6 back to Sims. The green flag waved to begin lap 63 with 65 minutes remaining in the race. The No. 67 Ford was called to the pits for a penalty for hitting the No. 25 BMW and the No. 912 also served a penalty for working while the pits were closed to GT cars. As other competitors pitted Edwards moved up to the second position and then drove the No. 24 BMW into the lead on lap 65, passing the No. 66 Ford. Six laps later the No. 62 Ferrari that started the race on the pole went past Edwards. A third stop for the Ferrari on lap 84 promoted Edwards back to the point and he proceeded to teach a master’s class in fuel conservation as he held the lead for the remaining 26 laps to score the first victory for the No. 24 BMW M6 this season.

“We were not the fastest car in the race today, but we had a perfect strategy,” said Bobby Rahal, Team Principal. “John did an amazing job to save enough fuel to go when he had to. There cannot be much left in the tank. To win here at Laguna Seca, a track I love, is very special. This win is one I know we’ll savor for quite a while.” 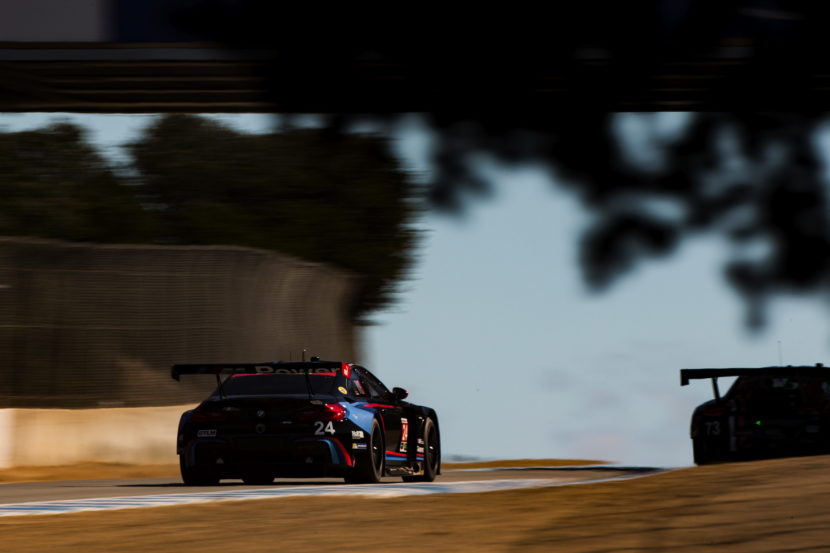 John Edwards, driver No. 24 BMW M6 GTLM (P1): “The last time I drove a black-livered BMW (Z4) at Laguna Seca Lucas (Luhr) and I won by 20 seconds. It was spectacular to be able to do it again – this time with Martin (Tomczyk) – in a black-livered BMW M6. I believe stressful may be the headline today. I had saved enough fuel, but I lost some time behind a prototype car and the Ferrari was right on me in the last corner. Luckily I was just able to hold him off.”

Martin Tomczyk, driver No. 24 BMW M6 GTLM (P1): “Today was a thrill. John did an amazing job this weekend. My first victory in the States. It is an amazing feeling.”

Bill Auberlen, driver No. 25 BMW M6 GTLM (P8): “I was running well in third place when I was hit in the back by the No. 67 Ford. I don’t think he was trying to do anything more than lighten me up and try to go by, but it was enough to put me in the gravel. Looking for a silver lining, our sister car ran a magnificent race to get their first win of the year. I think any hope for the driver’s championship has eluded Alexander and me, but we will still look for nothing but a win at Petit Le Mans.”

Alexander Sims, driver No. 25 BMW M6 GTLM (P8) “Today’s race was everything we expected and more eventful than we had hoped. It was over for us when Bill was spun and unfortunately a lost result.”

The final round of the 2017 IMSA WeatherTech SportsCar Championship, the Motul Petit Le Mans, will be held Oct. 7 at Road Atlanta, in Braselton, Ga. The 10-hour race will be streamed on imsa.com and broadcast on a combination of Fox Sports 1 and Fox Sports 2 beginning at 10:30 a.m. ET. Follow BMW Team RLL on Twitter at @BMWUSARacing for “from-the-pit-box” updates all weekend. 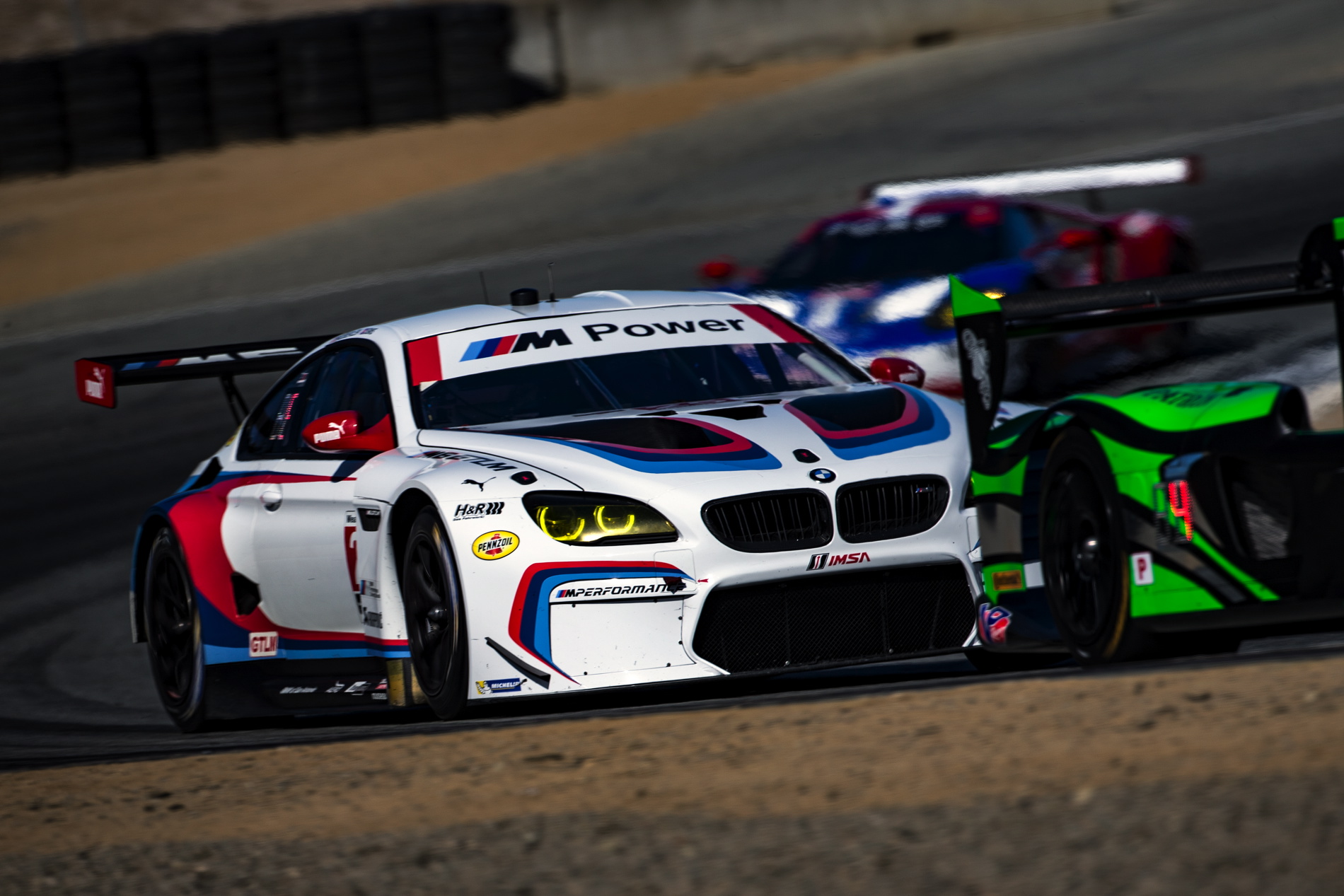 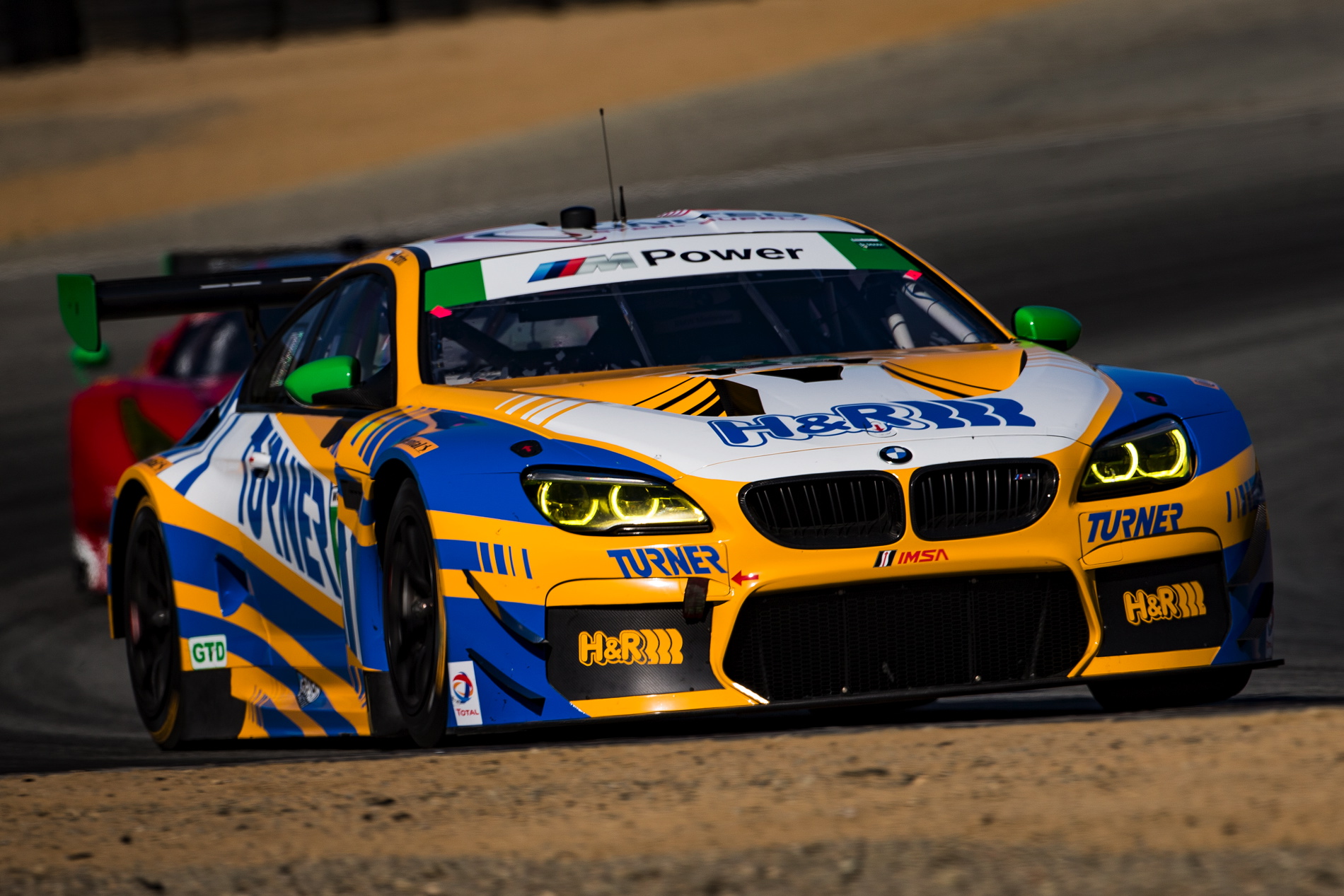 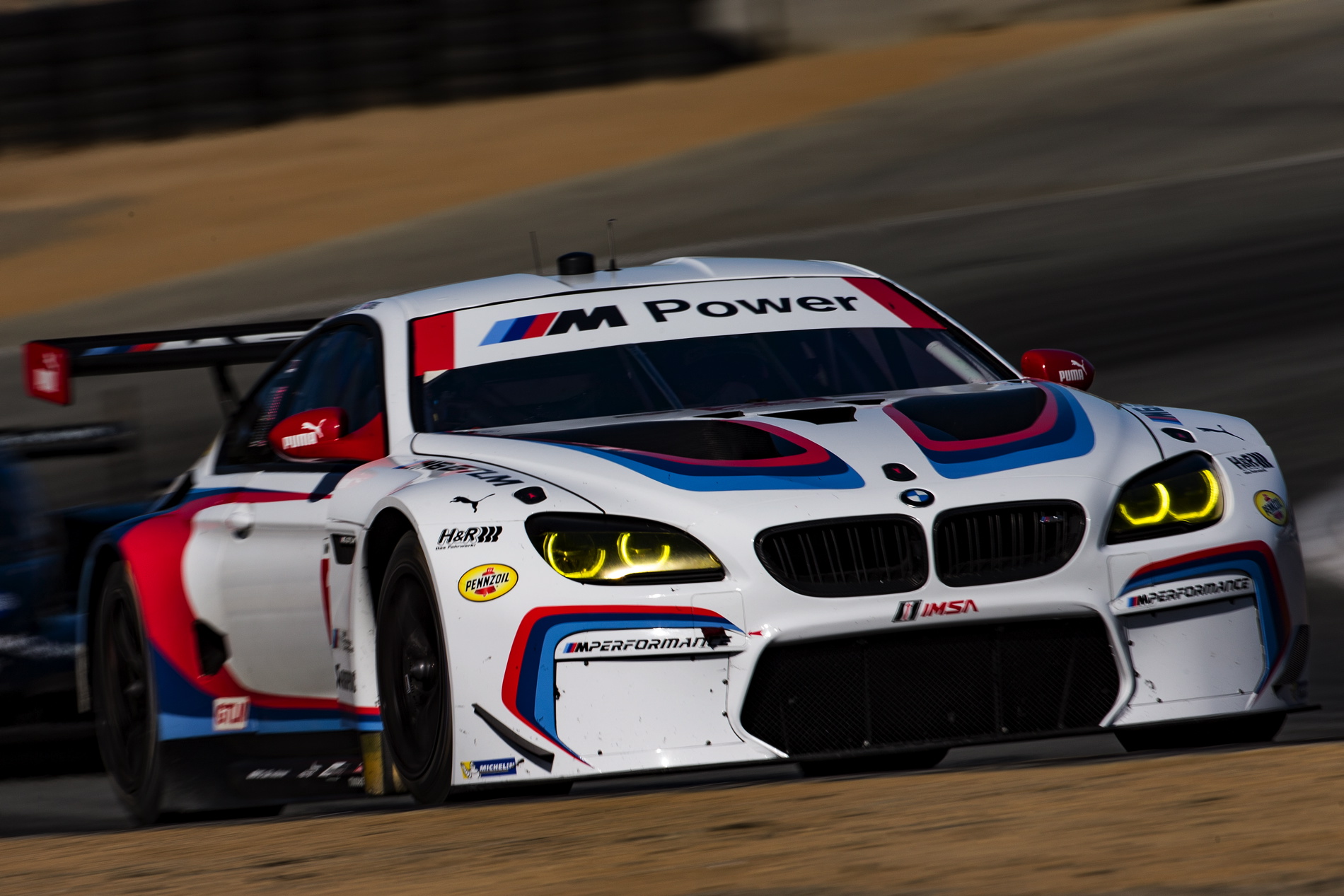 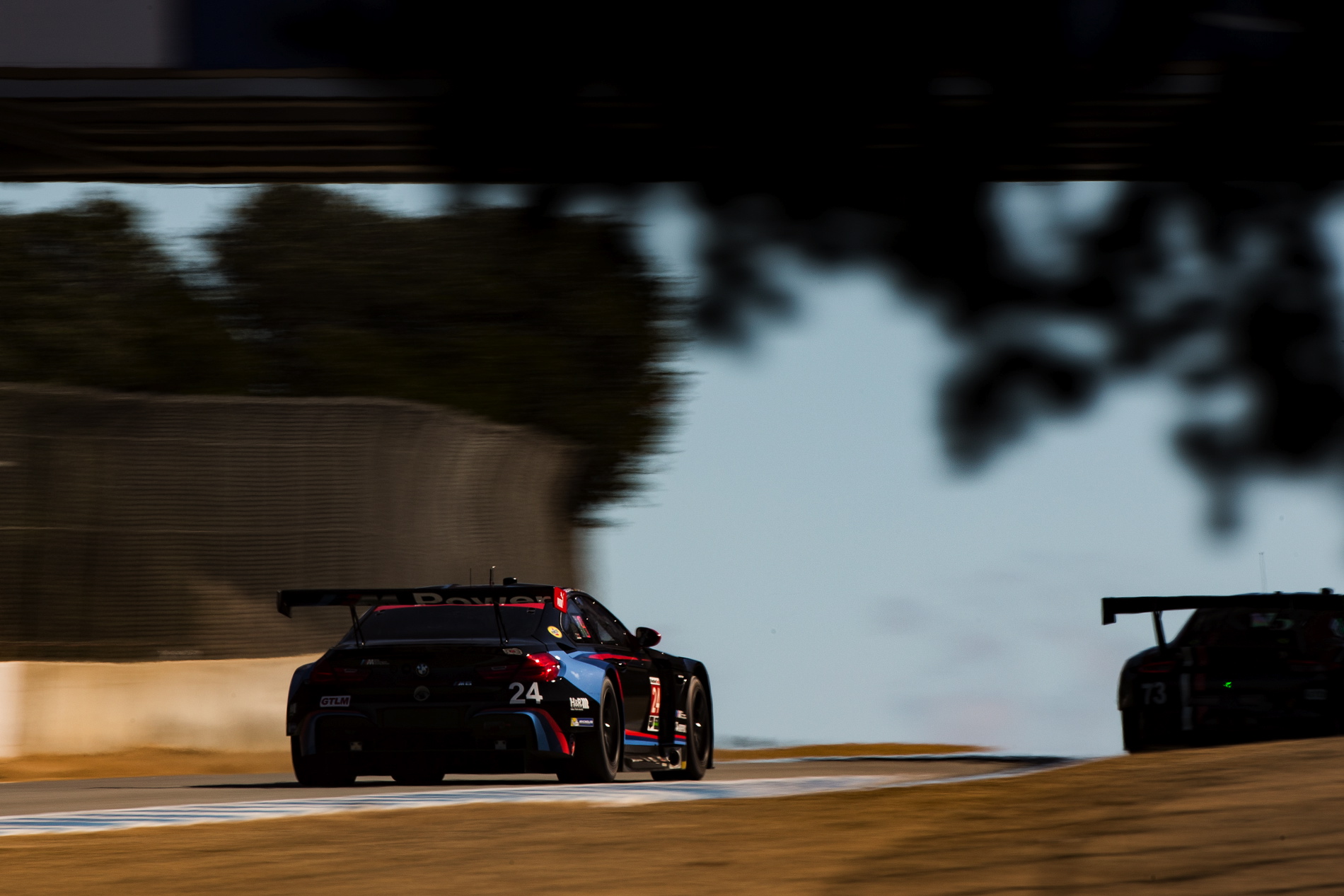 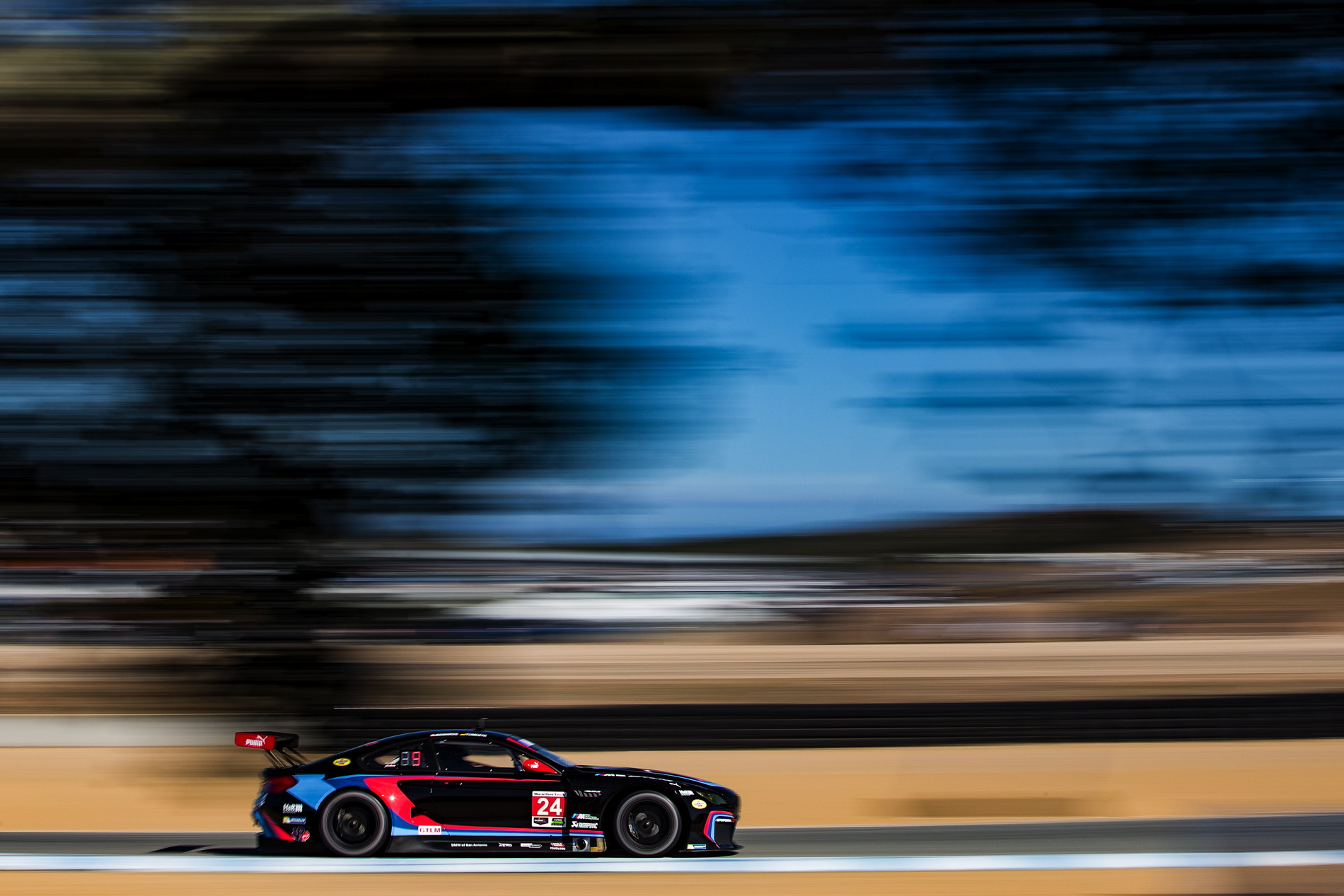 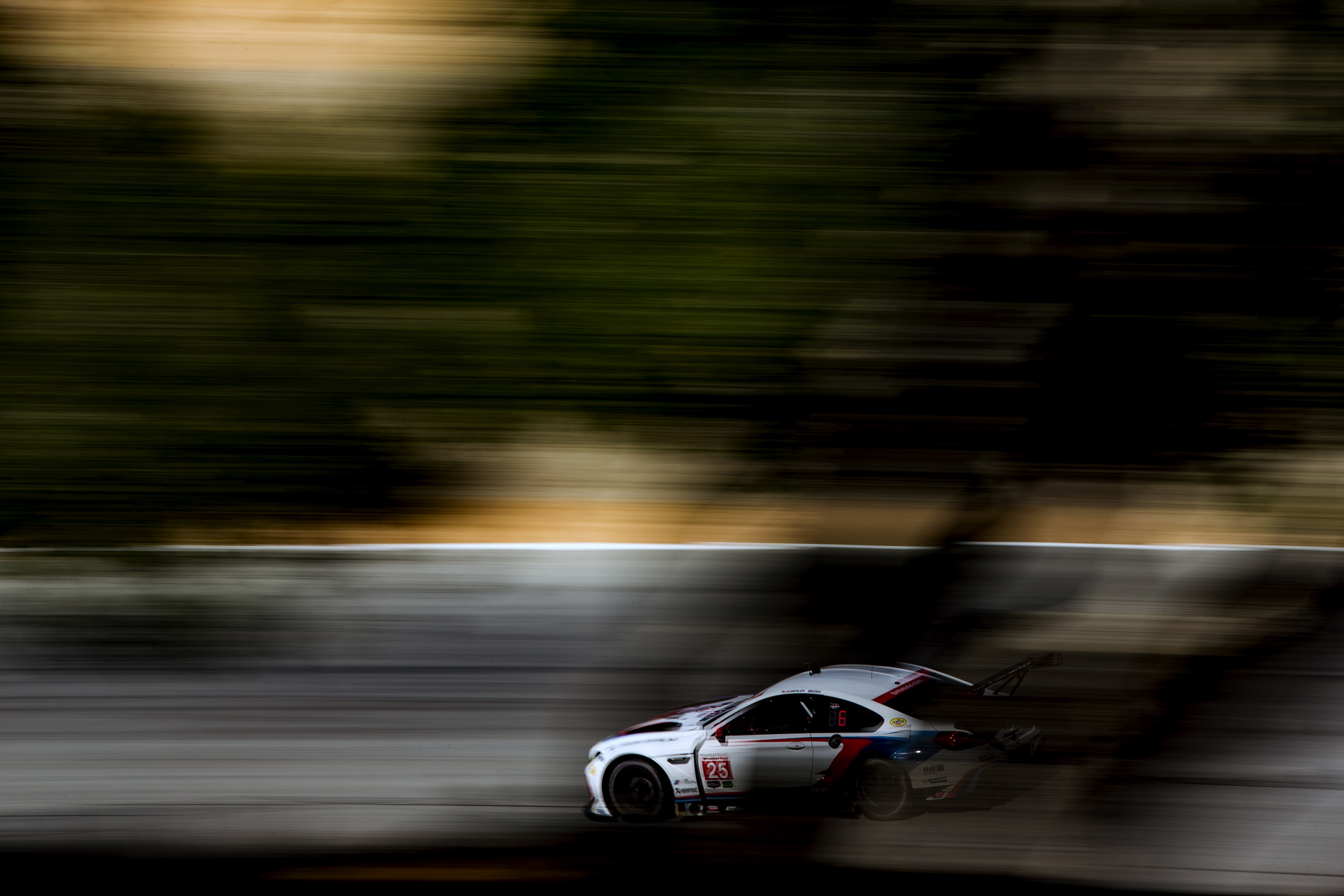 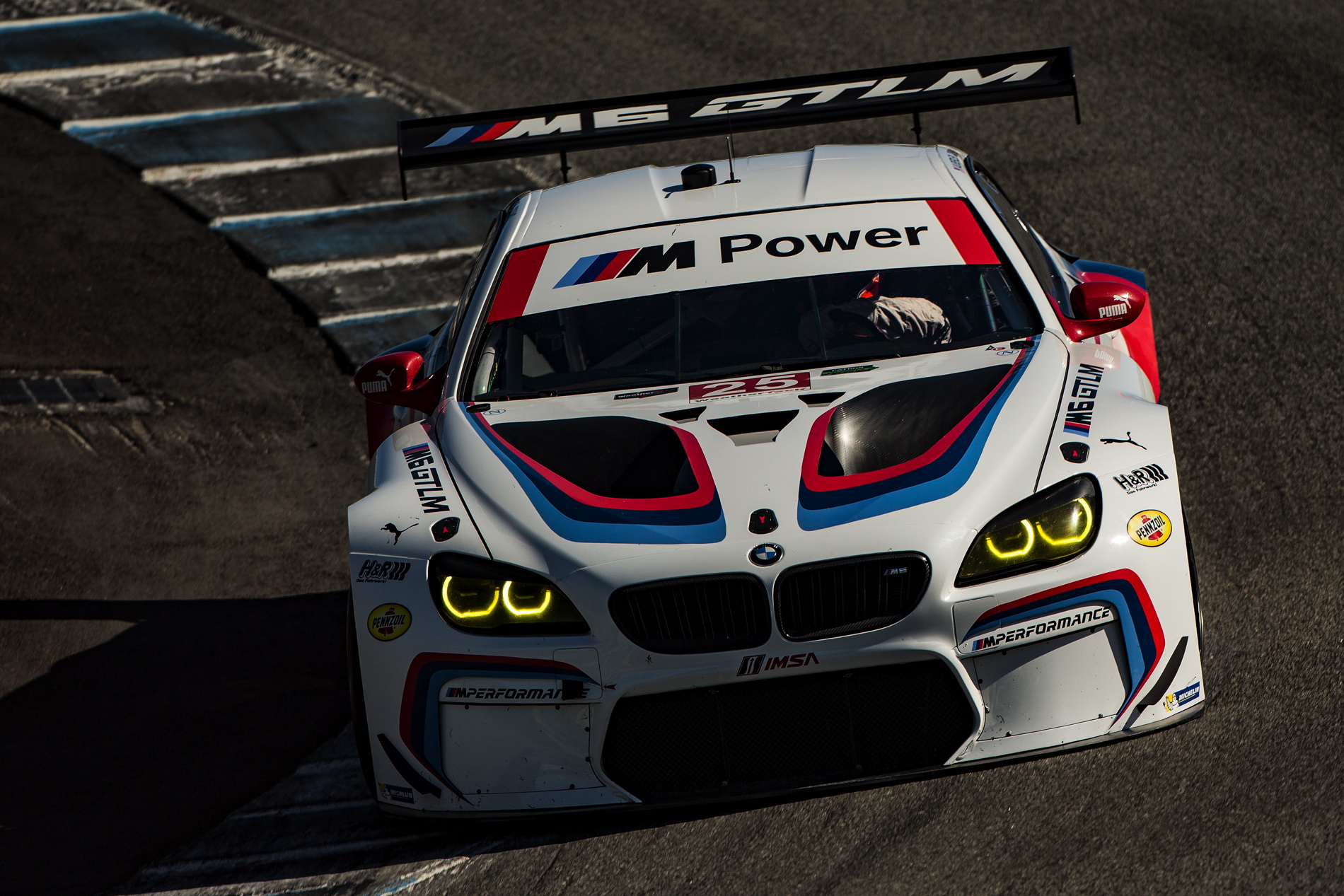 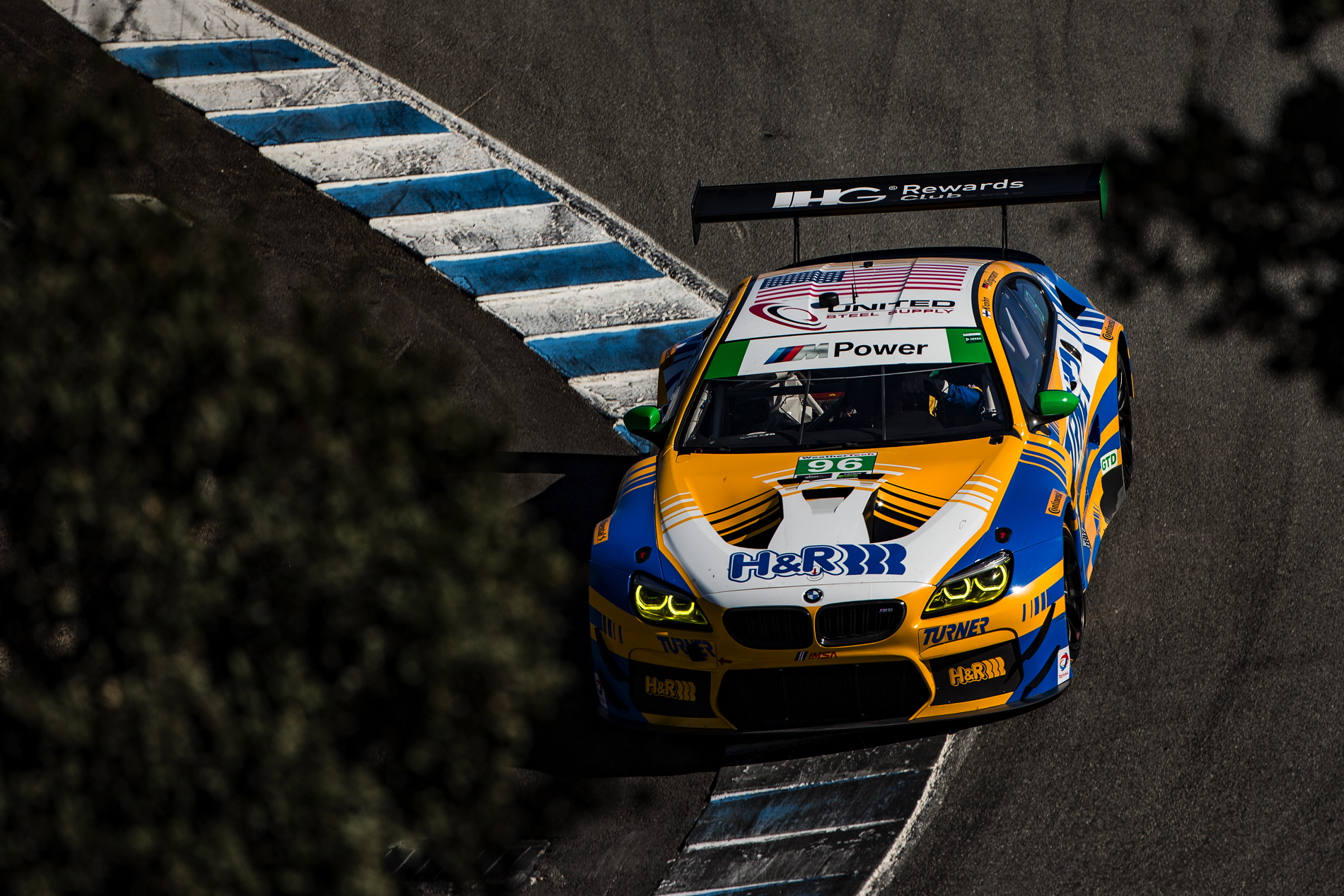 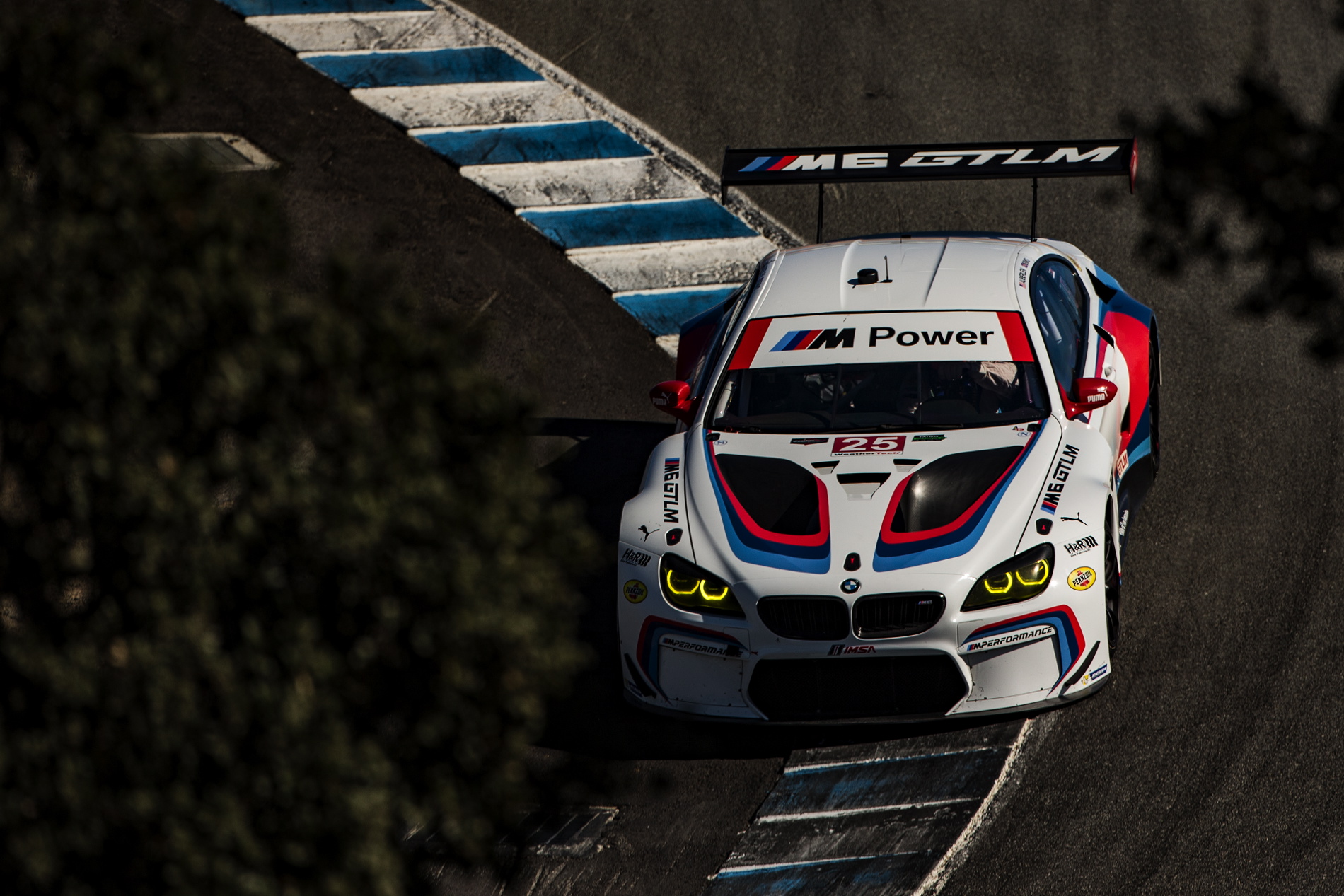 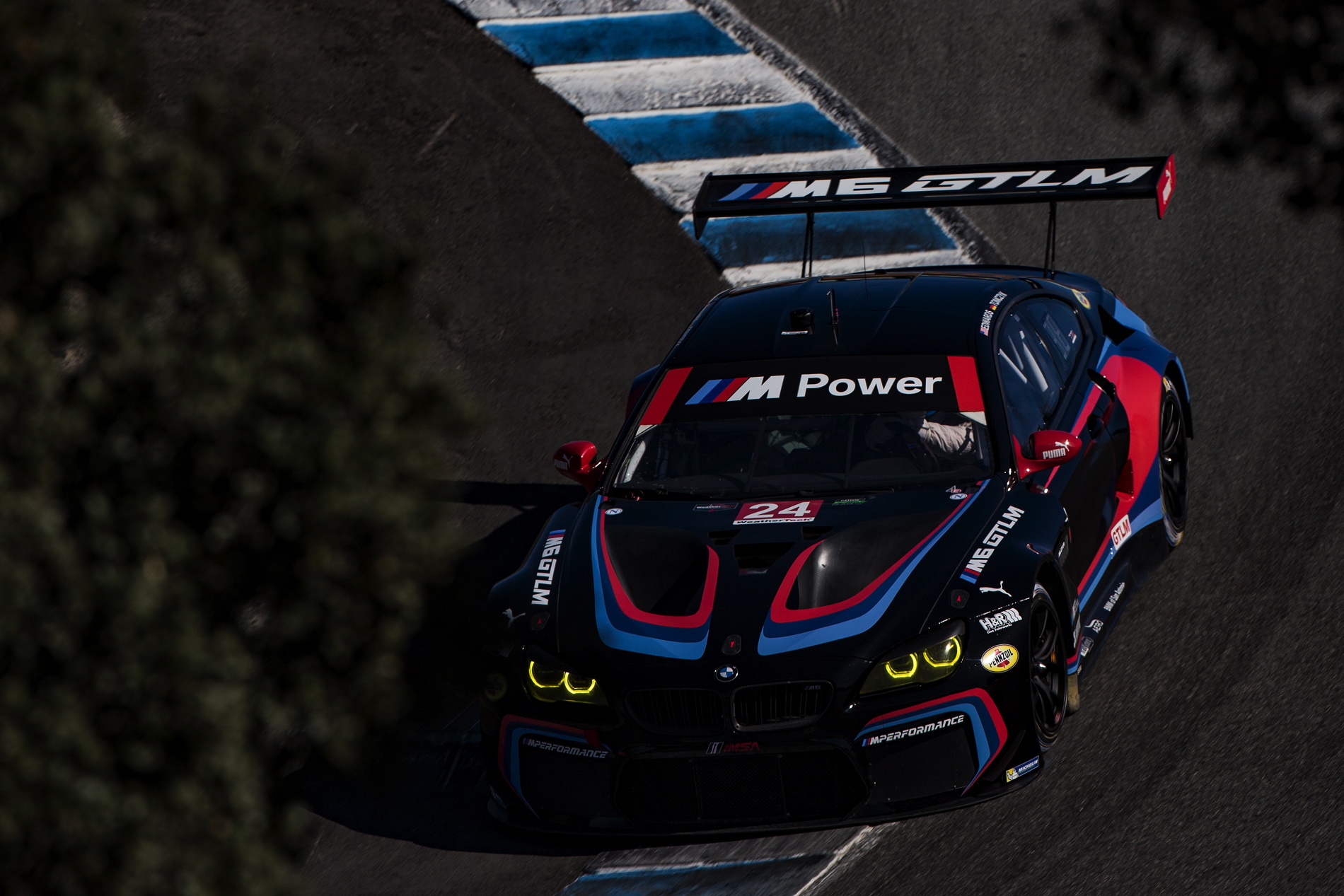