BMW M6 GT3 impresses at the 24h of Nurburgring 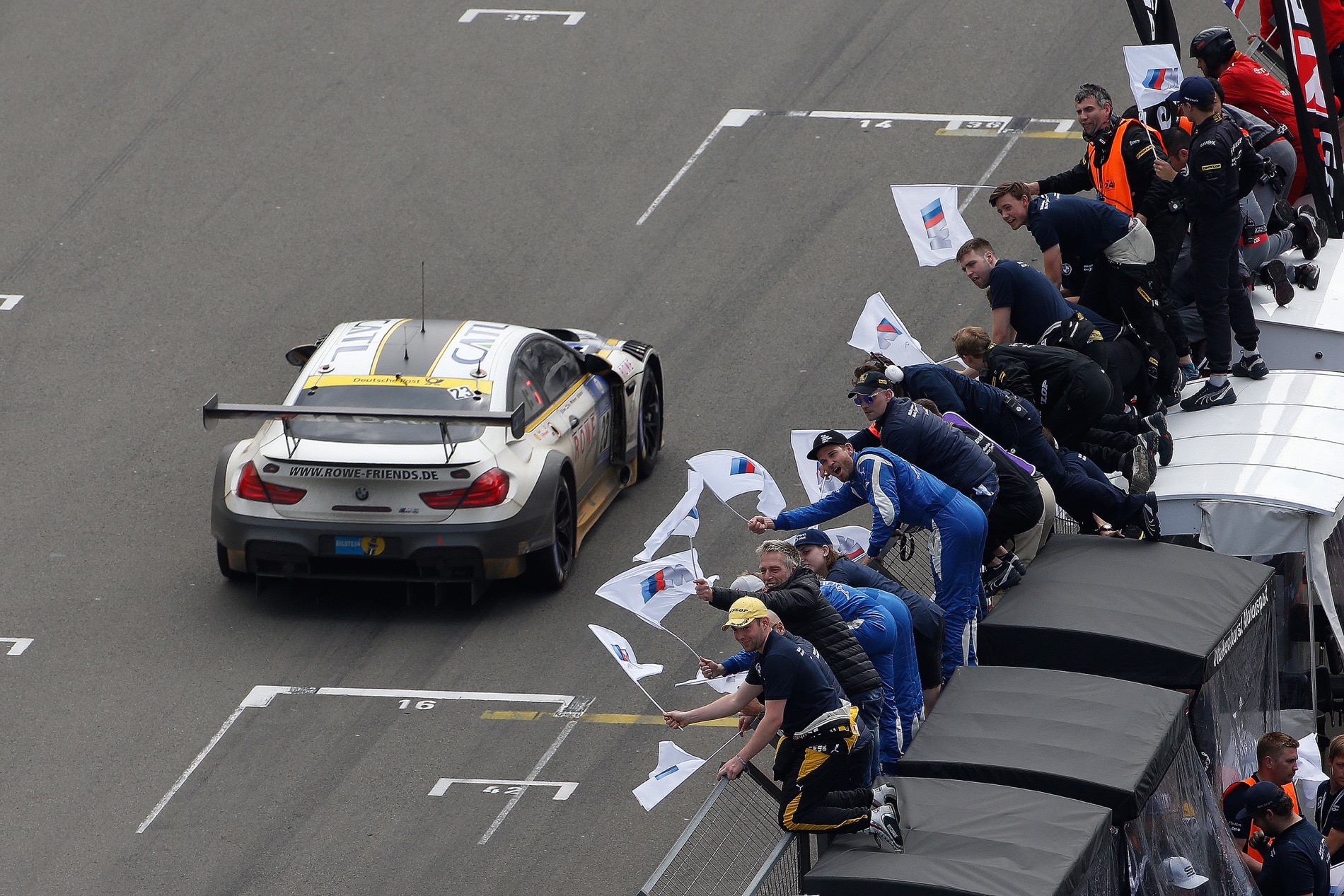 Yesterday, May 29, was the first ever appearance at the Nurburgring 24 Hours for the new BMW M6 GT3 race car. The BMW M6 GT3 replaces the old, but successful, BMW Z4 GT3. And at the M6 GT3’s first debut at the ‘Ring, it came in fifth place overall with drivers Alexander Sims (GB), Philipp Eng (AT), Maxime Martin (BE) and final stint driver Dirk Werner (DE) at the helm of the number 23 car throughout the race.

Two Walkenhorst Motorsport BMW M6 GT3s both finished in the top 30, with the number 999 car finishing 12th, despite needing repairs during the night, and the number 101 car finishing 22nd. This is an impressive outing for BMW and its M6 GT3, as the Nurburgring lived up to its “Green Hell” reputation yesterday. Both hail and rain fell for quite some time throughout the race, causing multiple crashes and one race interruption. But the M6 GT3 prevailed through all of the chaos of the day.

Although, not every M6 GT3 made it through the race unscathed. The number 100 Schubert Motorsport BMW M6 GT3, which was on track for a podium finish at the time, was hit by another car, causing it to hit the crash barriers. Fortunately, driver Lucas Luhr (DE) was unhurt in the crash. The number 22 car, a ROWE Racing M6 GT3 driven by Klaus Graf (DE) at the time, was also forced to retire following a collision with a slower car. This is especially disappointing for them, as the number 22 car was leading early on in the race.

Drivers Augusto Farfus (BR), Jesse Krohn (FI), Jörg Müller (DE) and Marco Wittmann (DE), driving for the Schubert team’s number 18 BMW M6 GT3, suffered engine failure on Saturday. Fortunately for them, they were able to repair the car throughout the night and get back on the track Sunday morning.

Despite a strong showing for some of the M6 GT3’s, not everyone at BMW M was entirely happy with the results. “Naturally we are somewhat disappointed with the race result and had hoped for more on the BMW M6 GT3’s debut at this endurance classic. But that’s how it is in endurance racing, especially here at the Nordschleife: You can plan preparation, and a race strategy – but not how the race will go. And once again the Nürburgring pretty much offered everything that has made it legendary; sun, rain, hail, extreme weather conditions and interruption of the race. And, unfortunately, luck wasn’t on our side. At times we were able to show the potential of the BMW M6 GT3, and were even in the lead. Then technical issues and two accidents meant that in the course of the race we only had one car left in the leading group. Unfortunately, that wasn’t enough with the strong competition. Which was very strong, much stronger than in the warm-up races. However, our performances in the first VLN races spoke for themselves: We showed what we were capable of achieving. I would like to say a big well done to our teams. Even though the result didn’t reflect this, Schubert Motorsport, ROWE Racing and Walkenhorst Motorsport delivered a fantastic, flawless performance, and the same is true of our driver line-up. The teamwork was a lot of fun and I am already looking forward to next year. I’m confident that then we will get a result that is a fairer reflection on our teams, the drivers and the BMW M6 GT3. Congratulations to Mercedes-Benz on its win.” said Jens Marquardt, BMW Motorsport Director.

However, some of the driver’s for the Rowe Racing team, who finished 5th overall, were pleased with how they battled throughout the turbulent weather conditions. “I think we did the best we could given the circumstances. It wasn’t a smooth race for anyone. The weather was just crazy. Then there was the interruption and a turbulent restart. We had a great comeback and battled our way into fifth place. I’m proud of the whole team.” said Alexander Sims, of Rowe Racing’s number 23 M6 GT3.

Dirk Werner mirrored a similar sentiment. “We battled and gave it our all. In these difficult conditions, the main thing was to make it through the race. We managed that. Our team did a great job. It’s a shame that we dropped down into 50th place on the restart. This meant that it wasn’t possible to finish even further up the field. I retired early in the two previous years, so it feels good that we finished in fifth place this time. The Nordschleife did what it felt like once again.”

So despite very unideal conditions during the very first Nurburgring for the BMW M6 GT3, there’s a lot of positives to take away from the 24h Nurburgring. The BMW M6 GT3 led the race for some time and, even after some serious setbacks thanks to rough weather conditions, made a big comeback to finish in the top ten.