After catching a few hours sleep were up and off driving a few miles down the road to the home of the Rolex 24 hour race, Daytona International Speedway. Two runs were scheduled for today and we were very curious as to what speed our BMW Performance Center Driving School/Crowne Plaza M6 could attain on the oval.
In the morning session we completed the three laps in 6:22.131, just ahead of our Luxury class rivals Dan and Ben Schaut who broke the timing light at 6:25.567. This placed us 11th overall for this session with the Schauts a further 3 places behind. For reference the fastest lap recorded in this session was Catesby Jones with a 5:51.684 in his highly modified Nissan GTR. 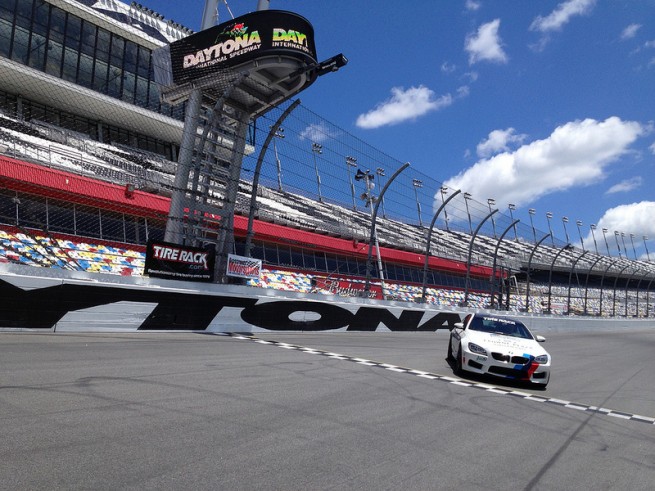 During the second session Mike had an opportunity to glance at the heads-up and saw 180 mph as he passed through the tri-oval and the M6 was still accelerating, but with turn 1 looming he had to keep his eyes firmly ahead as he set the M6 up for the breaking zone before turning into the infield section, so couldn’t observe the actual top speed reached. He did comment after that M6 just wanted to keep on accelerating even at that speed. So we finished the second time trial 11th overall with a time of 6:21.417, slightly quicker than this morning.
At the conclusion of our run we immediately packed up the car and headed off to the passage control at Grassroots Motorsports office where the staff was kind enough to provide goody bags for everyone.
On the road again, we headed north towards Kershaw, South Carolina for Wednesday’s two time trails at Carolina Motorsports Park, though we had a small detour planned to Critz BMW as the owner Neil Critz had invited us to stop by for a Low Country Boil and meet guests of his dealership.