The new BMW 3 Series Sedan not only sets new standards of driving pleasure in the premium segment of the middle class – the level of safety it provides is also first rate. In the latest Euro NCAP series of crash tests, the new BMW 3 Series achieved the top rating and was awarded 5 stars. The sixth generation of the sport sedan completed this most arduous of test procedures, delivering excellent results in all of the test criteria.

Following in the footsteps of its predecessor seven years ago, the new BMW 3 Series Sedan has again scored top marks for the brand, successfully completing test procedures which in the meantime have become significantly more challenging. The test procedures carried out by the Euro NCAP (new car assessment programme) are a measure of the protection offered by vehicles in the case of an accident, recognized by governments, motoring organisations and consumer protection groups throughout Europe. In addition to the protection afforded to the passengers in a number of different impact scenarios, active safety technology and pedestrian protection are also taken into account. 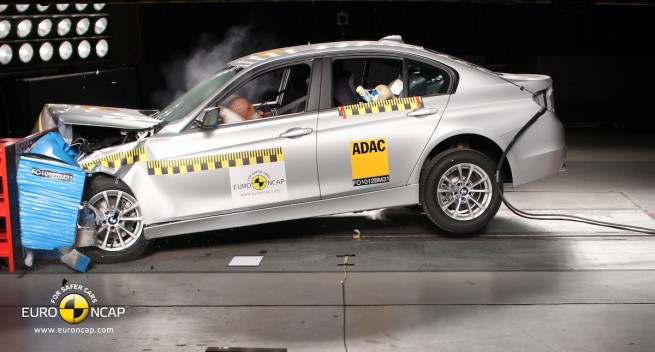 The passenger safety cell of the new BMW of 3 Series Sedan proved to be extremely resistant in both head-on and side impacts as well as in the side pole crash test. In all of the accident scenarios, the forces acting on the vehicle were safely channelled over clearly defined load paths and absorbed by generously dimensioned deformation zones. In addition, the extensive standard safety equipment including front and side airbags, side head airbags for both the front and the rear passengers, three-point automatic seat belts fitted to all seats, belt force limiters and belt tensioners in the front and ISOFIX child seat mountings in the rear provides both the driver and his passengers with extensive protection from injury, no matter what size they may be, or their seating position. In the event of a rear end collision, the active head restraints fitted to the front seats minimize the risk of whiplash injuries to the occupants of the vehicle.

The examiners also awarded high marks with regard to child safety. They certified that the new BMW 3 Series Sedan provides excellent protection in the event of both a head-on collision and a side impact. When test dummies fitted with sensors were strapped into seating systems designed for three year old and one and a half year old children, reassuringly at the moment of impact these “children” were all registered as maintaining stable positions with minimal head movements.

In order to optimise pedestrian protection, the new BMW 3 Series is designed with flexible structures and precisely modelled body areas at the front of the vehicle, which reduce the risk of injury to those on foot in the event of a collision. In the Euro NCAP crash test, the vehicle scored the maximum number of points for the design of the bumper and the front area of the bonnet. This very positive assessment also took into account the design of the structural elements at the front of the vehicle – those that are relevant to head injuries to children in the case of a collision.

The excellent results achieved by the new BMW 3 Series in the Euro NCAP crash tests is rounded out by the exemplary, comprehensive safety equipment.  This sedan is equipped with Dynamic Stability Control DSC and a tyre pressure indicator as standard equipment, optionally including the Active Protection System and the Enhanced Emergency Call with automatic location detection and determination of accident severity. Back in 2010, BMW received the special Euro NCAP Advanced Award for the BMW ConnectedDrive Advanced eCall, a capability unique in the middle class.

The 5-star rating won by the new BMW 3 Series highlights yet again the advanced level of safety technology designed into the current models of the marque. Since the expansion of the testing program in 2009, the BMW models undergoing the Euro NCAP crash tests have all, without exception, achieved the highest rating. Following the example set by the BMW X 1, the BMW 5 Series, the BMW X 3 and the new BMW 1 Series, the new BMW 3 Series Sedan has now also passed these tests with flying colours and been awarded 5 stars.

Adult occupant
The passenger compartment of the 3 Series remained stable in the frontal impact. Dummy readings indicated good protection of the knees and femurs of the driver and passenger. BMW showed that a similar level of protection would be provided for occupants of different sizes and to those sat in different positions. In the side barrier test, all body regions were well protected and the car scored maximum points. In the more severe side pole test, protection of the chest and abdomen was adequate and that of the head and pelvis was good. The seat and head restraint provided good protection against whiplash injuries in the event of a rear-end collision.

Child occupant
Based on dummy restults in the dynamic tests, the 3 Series scored maximum points for its protection of the 18 month infant, and lost only a fraction of a point for protection of the 3 year old. In the frontal impact, forward movement of the head of the 3 year dummy, sat in a forward facing restraint, was not excessive. In the side impact, both dummies were properly contained by the protective shells of their restraints, minimising the likelihood of contact with parts of the car’s interior. A switch is available as an option to deactivate the passenger airbag, allowing a rearward facing child restraint to be used in the passenger seat. This was not assessed as it is not standard equipment. There were clear warnings of the dangers of using a rearward facing restraint in that seating position without having deactivated the airbag.

Safety assist
Electronic stability control is standard equipment on the 3 Series and met Euro NCAP’s requirements. A seatbelt reminder is standard for the driver, front passenger and rear seats. A speed limitation device is available but was not assessed by Euro NCAP as it is offered as an option. 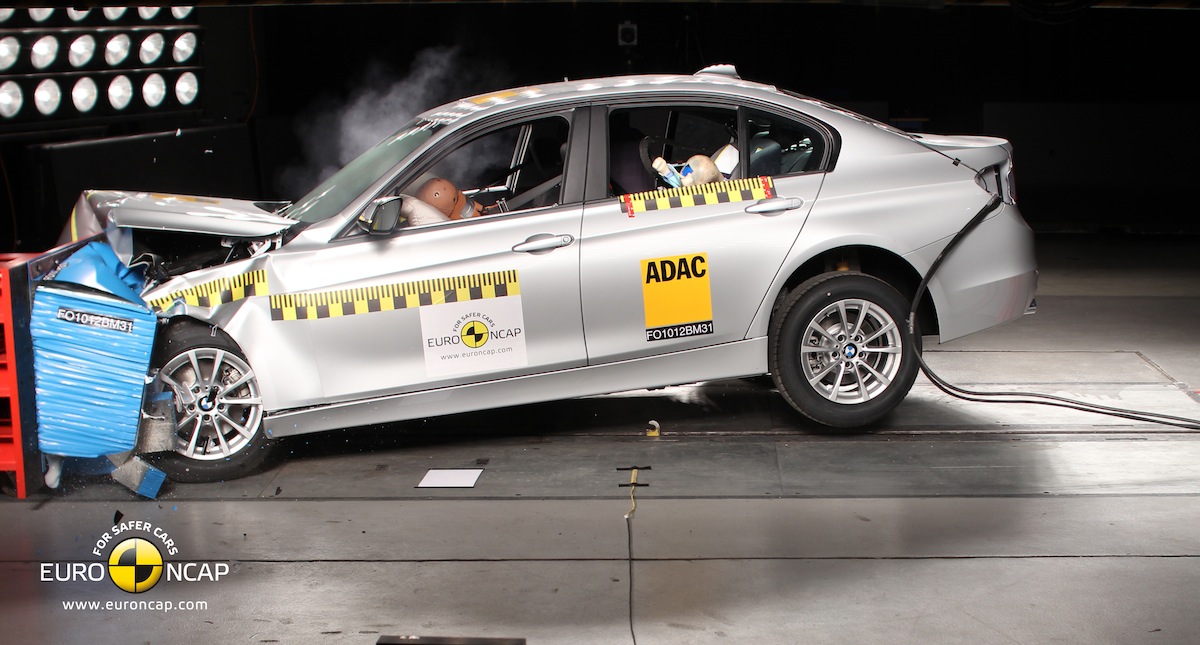