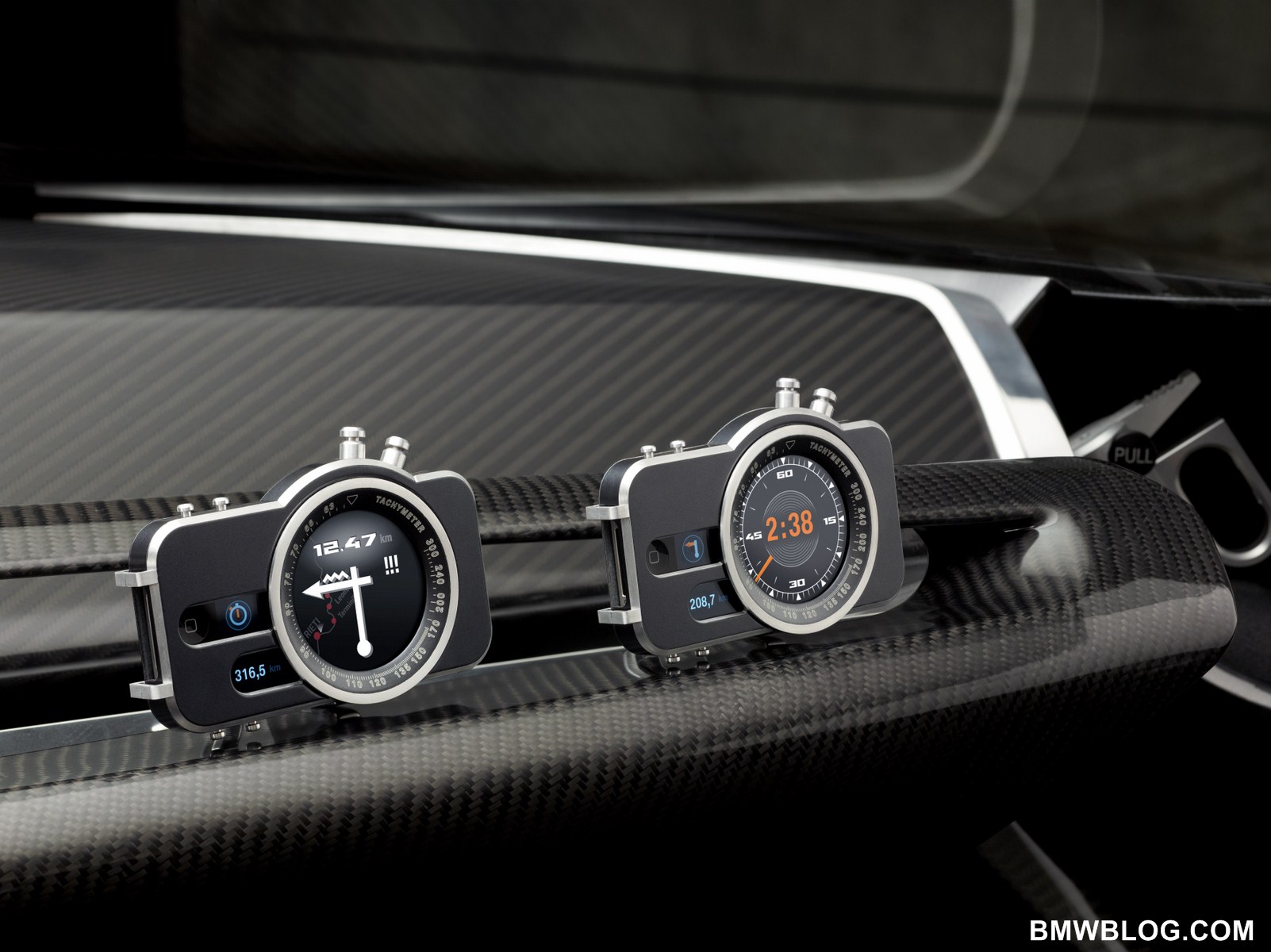 To pay tribute to one of the most successful and best-looking car of the 1930s, BMW unveiled today the 328 Hommage. This year, the original BMW 328 celebrates its 75th birthday and at the Concorso d’Eleganza Villa d’Este, BMW will showcase this new two-seater anniversary model. 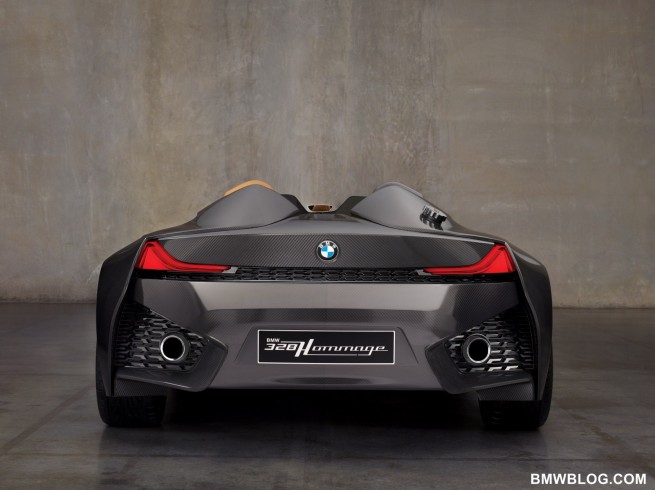 The two-seater roadster follows the steps of the previously unveiled Vision concepts: Vision EfficientDynamics and Vision ConnectedDrive. Labeled as another emotional roadster, the proportions and cues follow the design language of the Vision family, another layering approach, both on the inside and outside. At the front, BMW designers chose a combination of classic and futuristic design cues, with a very wide and road-focused approach. The three-dimensional front-end leads with a long CFRP bonnet that offers an impressive road stance. The round headlights emphasize the car and driver’s focus on the road and are surrounded by large air intakes that create visual lightness. 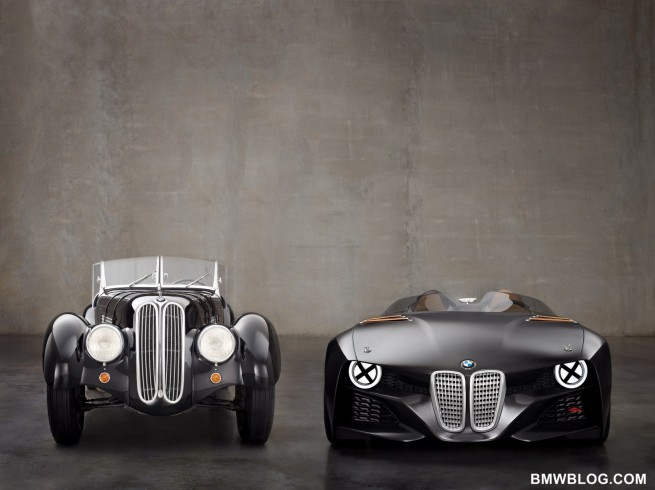 At the rear-end is where the Vision design cues stand out even more. The L-shaped taillights have been designed with the layering language that creates a visual lightness, along with physical lightness. The large vents and openings emphasize the light appearance even more, with circular tailpipes located inside the two air outlets.
The concise lines flow over the taut surfaces of the vehicle’s bodywork resulting in a play of light and shadow. As seen on the Vision ConnectedDrive, the flat trunk gives the car a wide and sporty look with a direct visual line going through the windscreen. 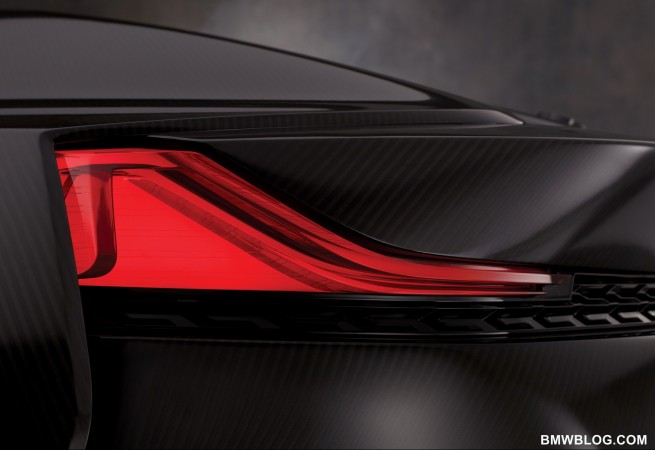 Inside, a similar design language has been applied, a combination of classic, modern and futuristic, in a single vehicle. Layering is also applied here and along with the CFRP interior structure, it gives the 328 Hommage a visual and physical lightness. Due to its exceptional characteristics, CFRP is in itself robust and can be shaped into self-supporting structures. Hence, only two large layers define the interior of the BMW 328 Hommage. 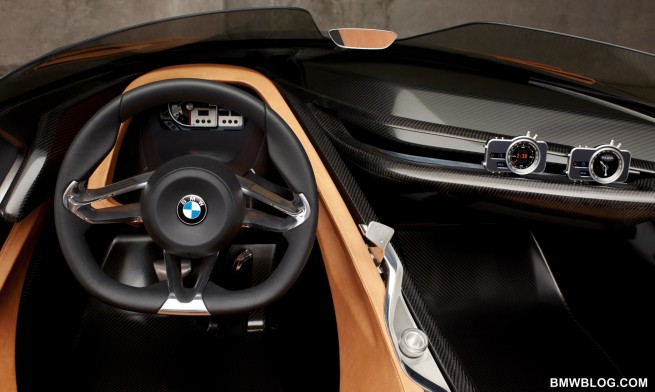 Remaining truthful to its DNA, BMW maintains the driver-orientation design separating the driver and co-driver areas from each other. The interior combines brown leather with aluminum and carbon fiber trim in a beautiful, harmonious way. The instruments featured in the BMW 328 Hommage are both sporty and functional to an equal extent. Like the cockpit of the BMW 328 and typical of a sports car, the instrument cluster indicates in addition to engine speed only the oil temperature, oil pressure and water temperature. To the right of the rev counter, control lamps and a gearshift point indicator complete the instrument cluster.

Viewed from above, a slightly asymmetrical design of the bonnet and windscreen underscores the driver-orientated construction of the BMW 328 Hommage. 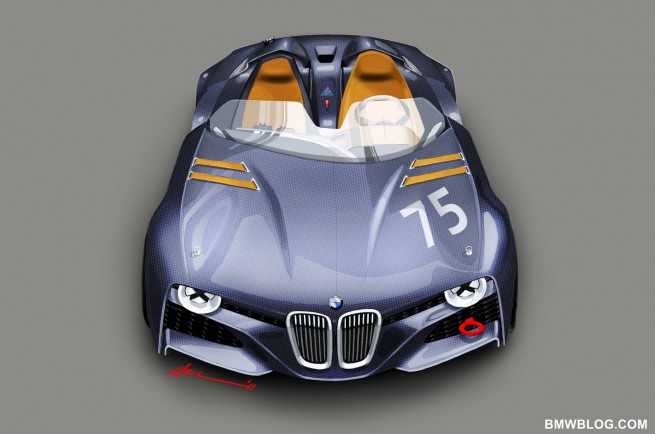 ConnectedDrive technologies introduced with the Vision concept are also present in the 328 Hommage, starting with the trim made out of a soft cloth that underneath features a touch sensitive metal. With a swipe of the co-driver’s fingers, the information displayed on the LCD screen built into the passenger’s dashboard gets transferred onto the driver’s display. 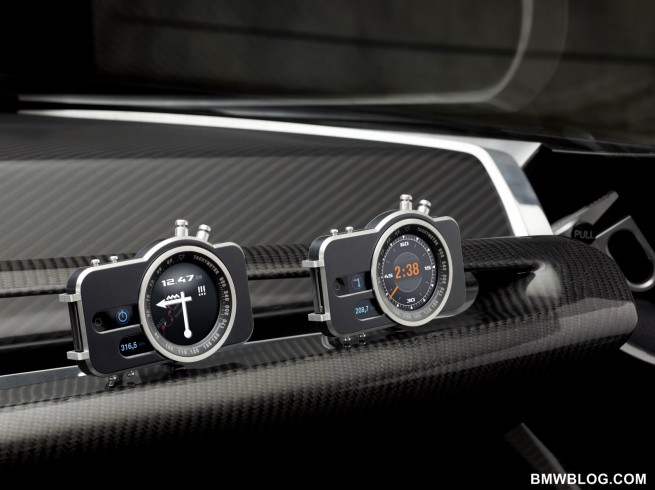 The instrument panel of the BMW 328 Hommage is a fitted with two iPhones located in special holders and which assume additional display functions for the driver and co-driver. The iPhones function as stopwatches for measuring lap times and secondly as GPS roadbooks.

The layering design language began in 2009 when the future BMW i8 was introduced, and followed this year by the Vision ConnectedDrive, a roadster that in our opinion will lead to the introduction of BMW Z2, a smaller 2-seater roadster that will showcase some of these design cues and technologies.